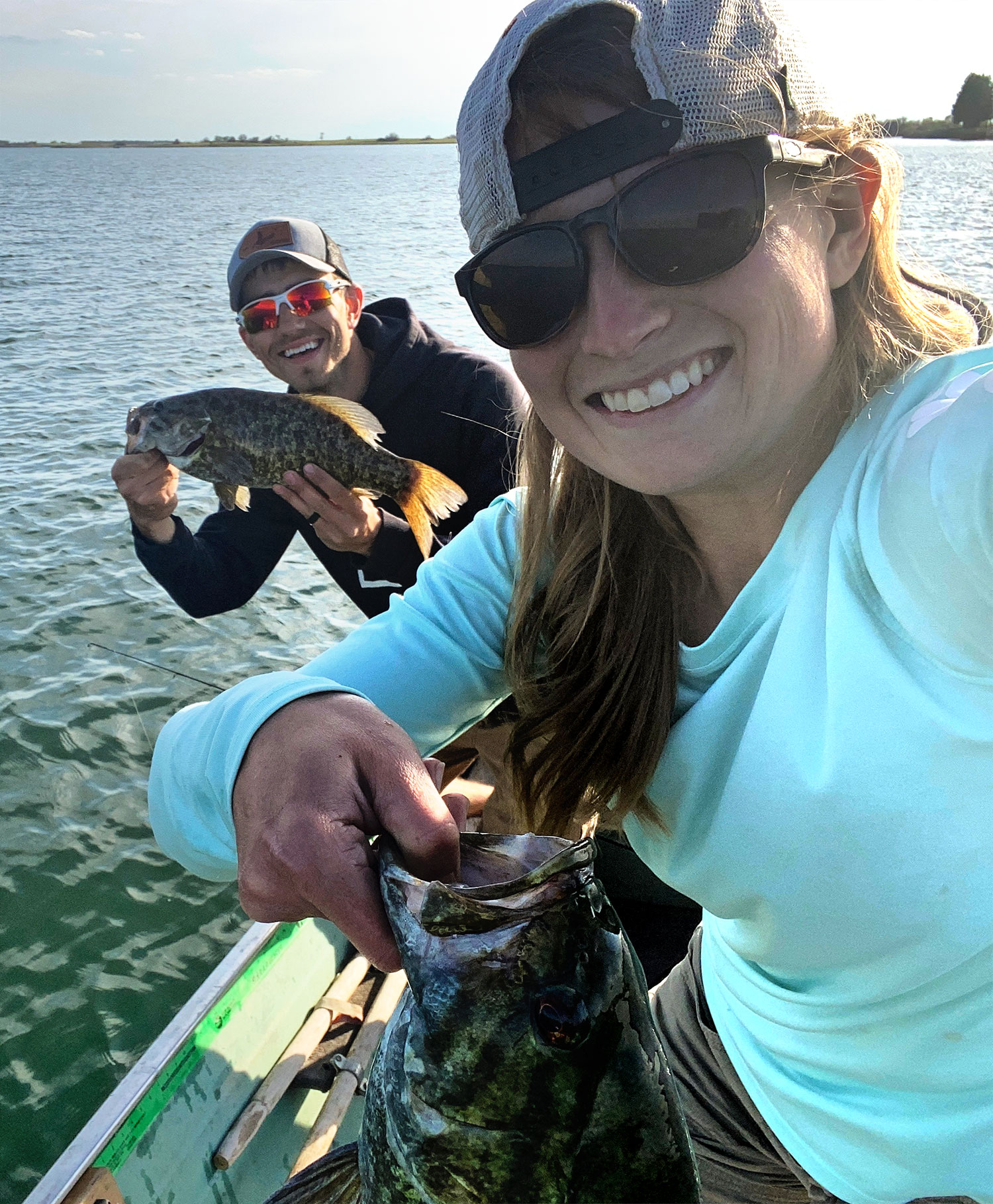 One of my prized possessions, co-owned with my husband, is a rusty, worn out, 16-foot Crestliner boat, powered by an equally tired 25 horsepower Evinrude outboard.

We affectionately named her The Pounder. She’s not fancy, is a lovely shade of sun-bleached turquoise, and the spare on the trailer that hauls her is flat (we should probably replace that), but she gets us on the water, our favorite place to be this time of year.

We bought her last spring as an upgrade from our 14-foot boat, with 9.9 horsepower Johnson that seemed to always be giving us trouble, getting blown into shore, or causing one too many fights for a newly married couple. This boat was not-so-affectionately named the Tin Can, so when we upgraded, a reference to a slightly larger, 16-ounce can seemed like a fitting name, and The Pounder was christened.

She has a long way to go to live up to Dad’s Alumacraft. That’s the boat I caught my first fish in, likely a 4-inch bluegill on Cross Lake in Minnesota, and I was no doubt rocking a Snoopy life jacket. That boat took me on annual Memorial Day walleye trips to Canada that usually turned to pre-spawn smallmouth bass endeavors when spirits were low and fingers were cold. I took naps under the console and played with fish in the livewell. We once spent the night in the boat on Mille Lacs Lake, and I awoke to my brother tossing a walleye on my sleeping bag. There’s a mark etched well-beyond the 45-inch tape from Dad’s largest muskie, and you’ll find everything you would need on the dashboard. I grew up in that boat and time, as you can imagine, drifted by fast from that first sunfish to now.

The Pounder, however, will always mark an equally beautiful time in my life. We may still be building careers and a savings account, but there’s always money for a tank of gas. We’ll always pick one more cast over getting home at a reasonable time, and we’ll always make room for our rambunctious bird dog, Finley, even if he interrupts the fishing.

Sure, I have dreams of owning a bigger boat that can brave the windy North Dakota waters a little better, one with a GPS trolling motor, and one that I can’t just wheel into the one-stall garage of our first home if I don’t back it in just right. But I have a hunch that when that day comes, quick runs out of town may be tougher and that beloved bird dog may have a few more gray hairs. 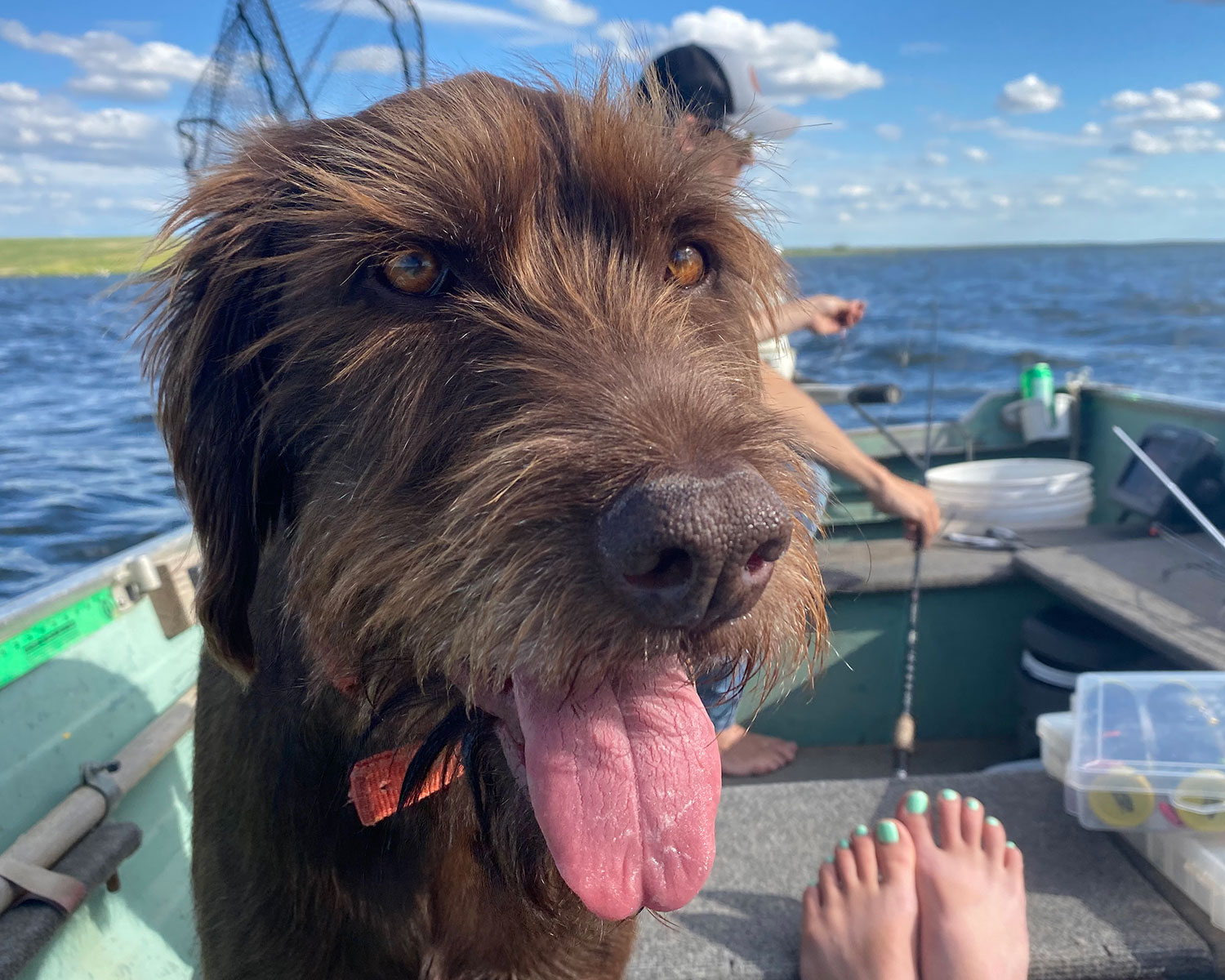 In the meantime, we’ll enjoy where we’re at, and The Pounder has already created memories of its own.

Amidst a pandemic, we were able to spend almost every weekend last year on the water. When we could, we sought the allure of the big lake, but we honestly did better sneaking The Pounder onto a few of the potholes North Dakota is known for, one of which we had to make our own boat launch for. We trolled and drifted the summer away, having picnic lunches, and enjoying fish tacos for dinner whenever we wanted. 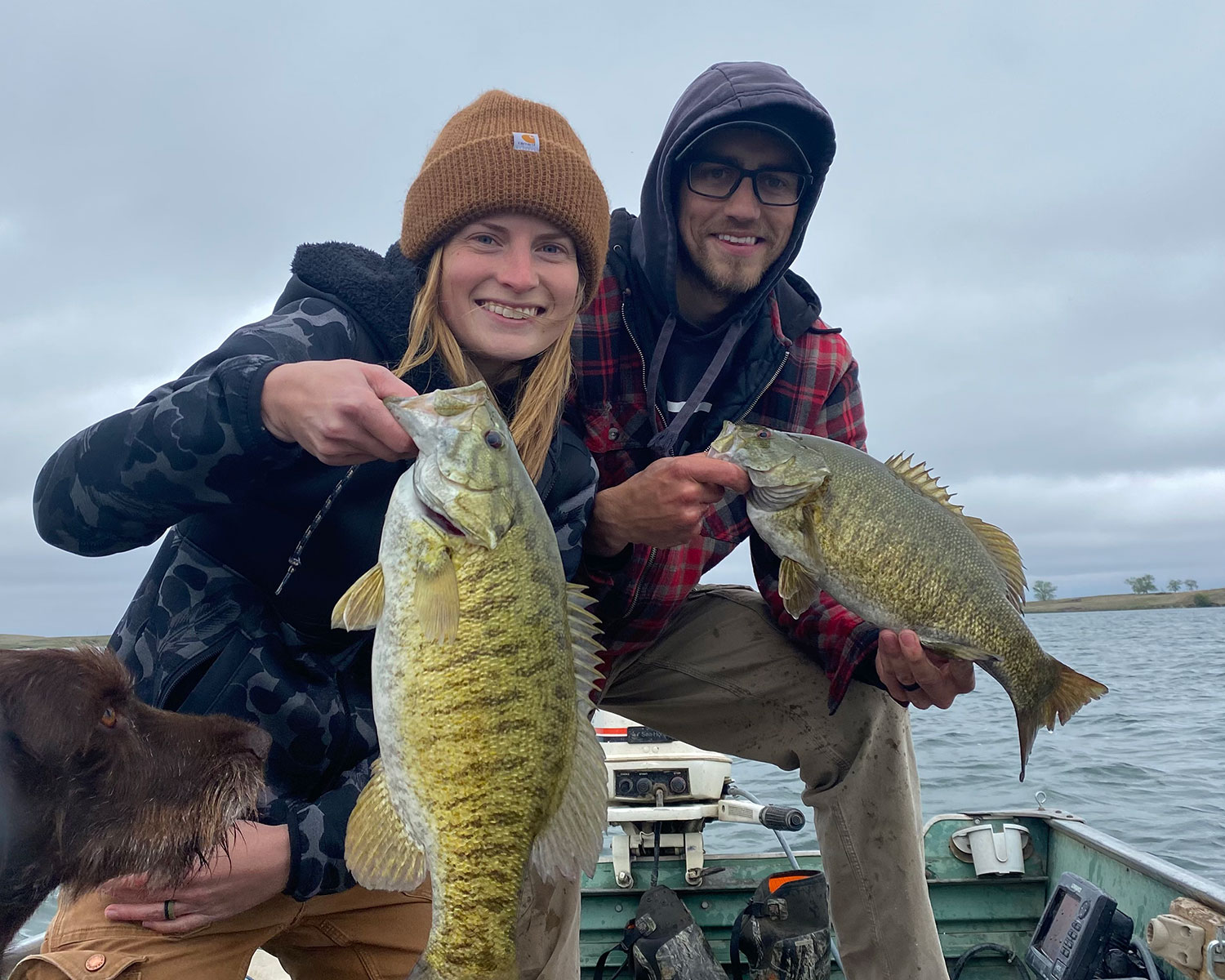 Last summer, The Pounder also stole my largest muskie story from Dad’s Alumacraft. I wouldn’t necessarily recommend muskie fishing to any new anglers out there due to their aptly given nickname of “The Fish of 10,000 Casts,” but I was gifted the muskie bug and there’s no going back. Fortunately, if you are intrigued by this illusive species, your decision of where to go in North Dakota is relatively easy due to the few water bodies that hold them.

Anyway, we had given them well over 10,000 casts and had only spotted one before I hooked into a beauty last summer. A family camping on shore cheered as we successfully boated it and I almost regret that Finley wasn’t along just to add to the chaos of getting a muskie of that size into The Pounder.

Most recently, an outing on The Pounder landed one of us in the ER.

The end of May signals the smallmouth bass spawn on a favorite North Dakota lake and brings back memories of Canada. These fish will begin to move shallow and make nests, and much like me, they’re known for being feisty for their size.

We charged batteries, dusted off rods, packed snacks and headed out. It didn’t take but a handful of casts before I had the inaugural fish of the year in my hands, a chunky smallmouth bass, heavy with eggs. After a picture and a few Finley kisses, she was back in the water.

The temps that evening felt like they did in Canada too, but the fishing was hot enough to distract me. We were just getting setup to do our third drift while I was taking a quick peanut butter M & M break, when my husband hooked into a northern pike. The fish pulled drag and his line got caught in both my jig dangling over the edge and the trolling motor. During an attempt to unhook his line from my jig, the fish made another untimely run and the hook dug into the side of his finger. I quickly grabbed his rod from him, now free from the hook, lifted the trolling motor so we could untangle it and reel the fish in. I turned to him and said, “Do we need to go?” “Yep,” he replied. 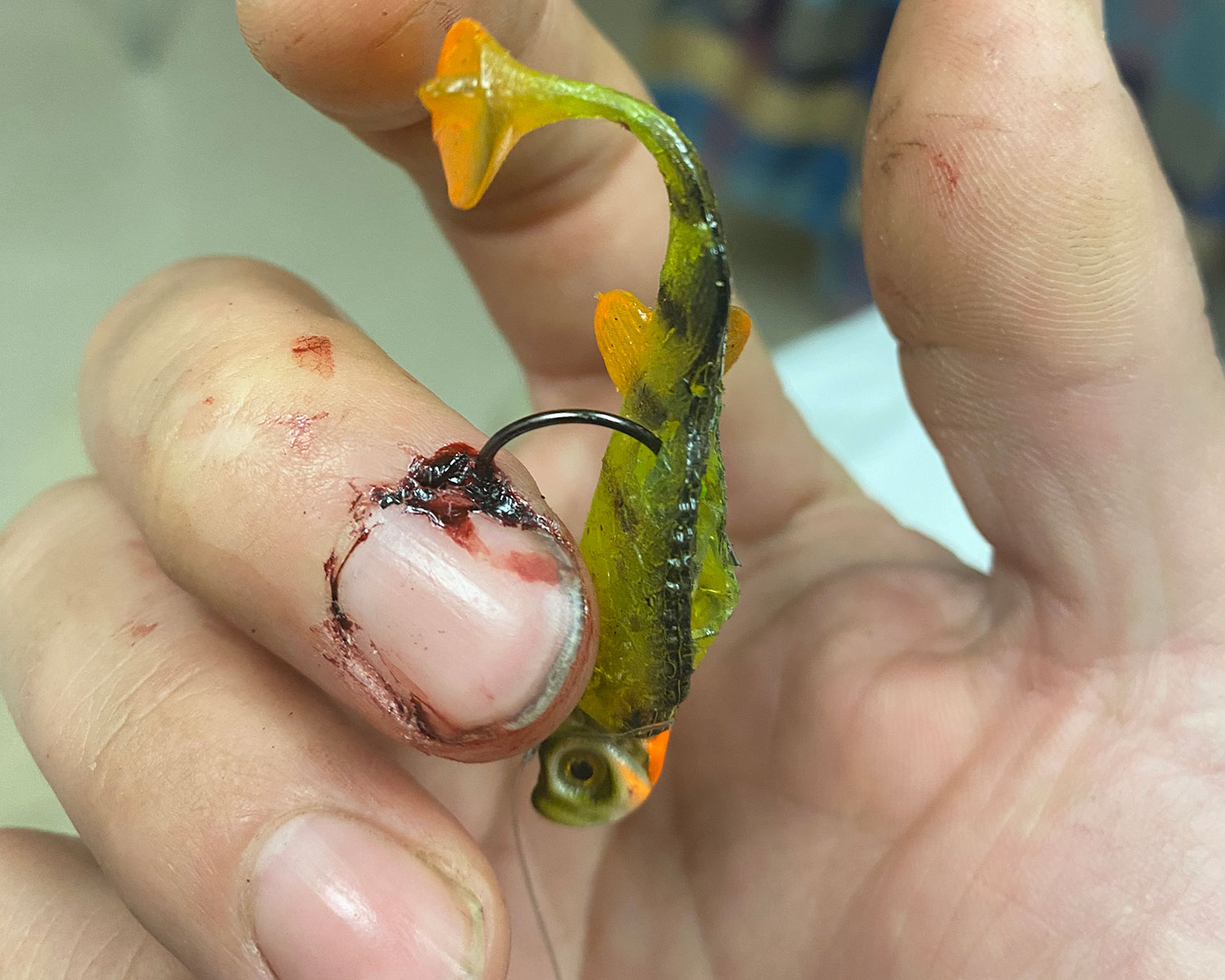 The hook was sunk into his finger past the barb and past my comfort level in pulling out. It was also conveniently 7:30 p.m. and we were over an hour away, meaning every urgent care in Bismarck would be closed. I dropped him off at the ER a little before 9:00 p.m., went home to put the boat away and feed Finley, and it wasn’t until after midnight that I got the call to pick him up.

All was well after a quick numbing and an updated tetanus shot. The worst part (if you ask me) was not getting that third drift in or a chance to switch to slip bobbers for walleyes at sunset.

In some ways, I think there is still plenty of “growing up” left to The Pounder. And I’m looking forward to all of it, even if you do catch me saying in a brief moment of frustration that “WE NEED A BIGGER BOAT.”

Yet, when the time does come to upgrade The Pounder, I’m looking forward to targeting those 4-inch bluegills once again. 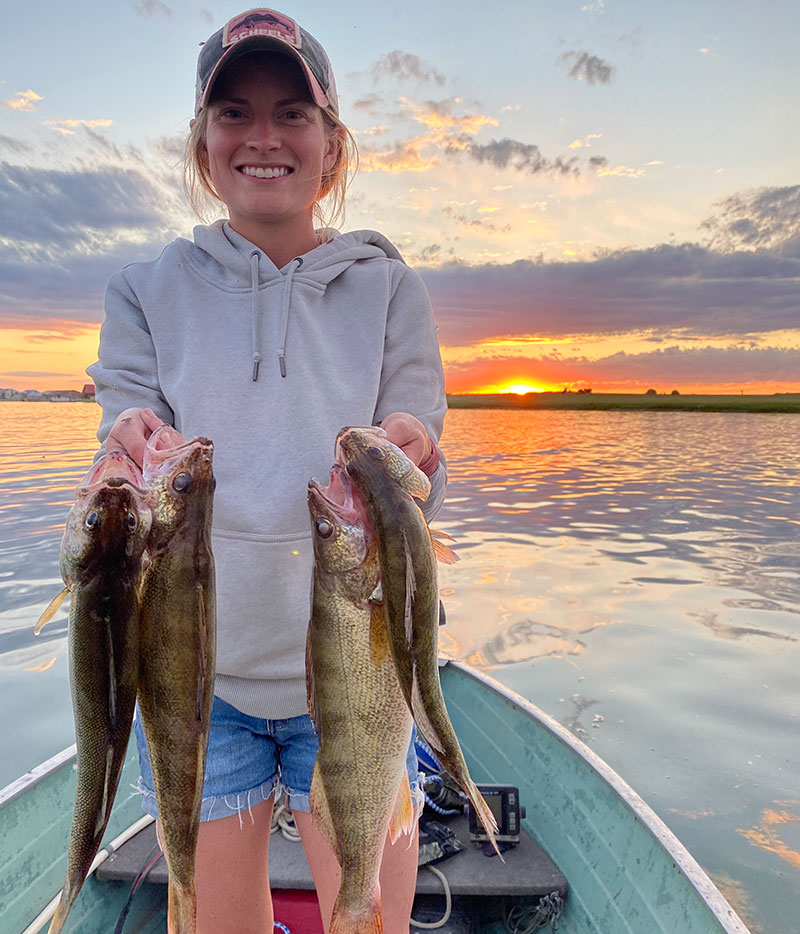