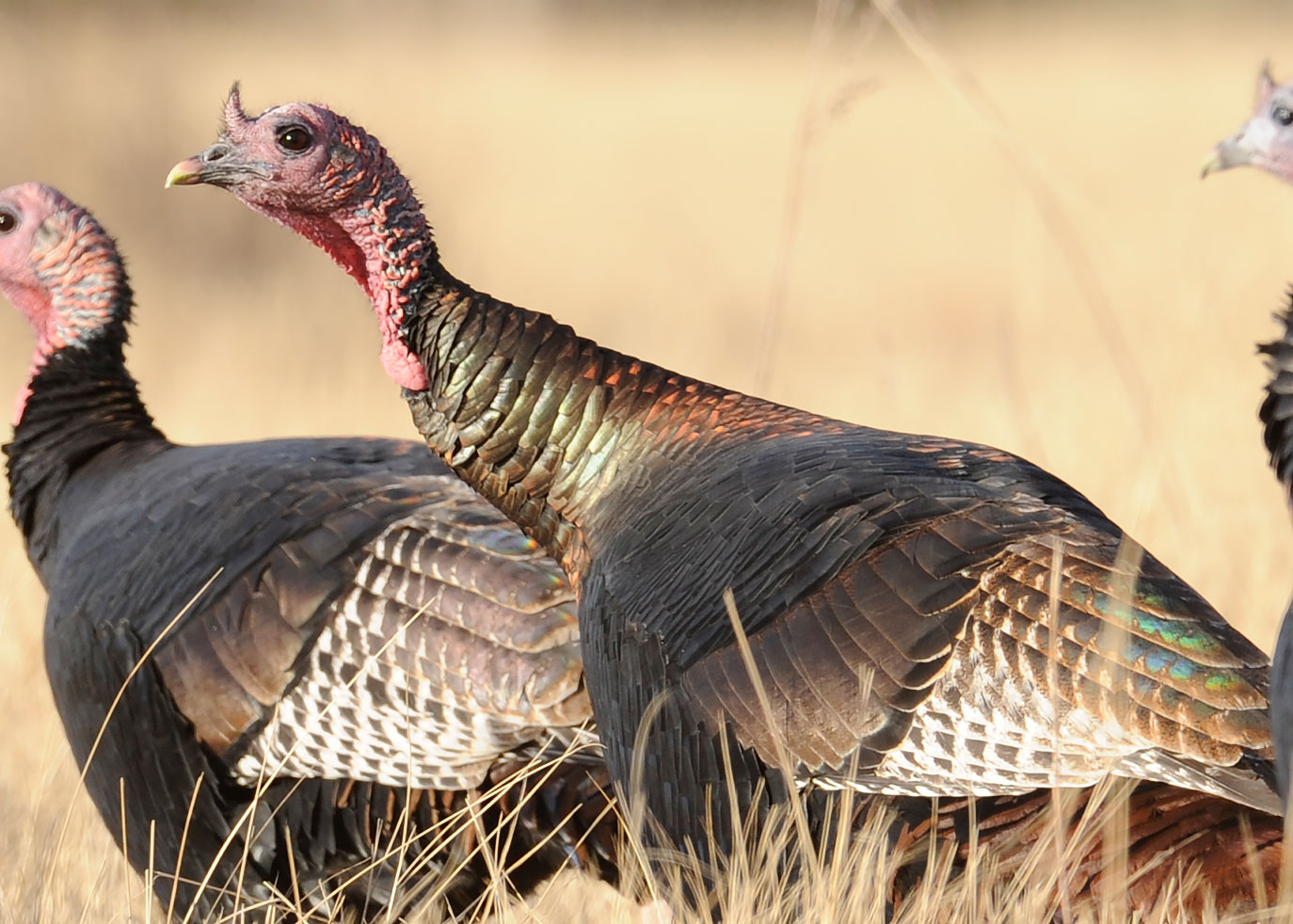 Wild turkeys are not native to North Dakota. Their historical range extended only as far north as southern South Dakota and Minnesota. The first introduction of turkeys into North Dakota took place in the early 1950s along the Missouri, Knife and Heart rivers. North Dakota is currently home to two subspecies of the wild turkey; the Eastern and Merriam’s subspecies.

Turkeys are easily identified by their large size, unfeathered head and large tail. Both sexes have bronze-colored plumage, with variation between the subspecies. Male turkeys, referred to as toms or gobblers, are about 48 inches long and weigh 16-24 pounds. Males have a modified feather (beard), protruding from the breast, which is short and inconspicuous in year-old males and up to several inches (10-plus inches) long in older birds. Males also have caruncles (knobbed fleshy areas on the head and neck), spurred legs and black-tipped breast feathers. Females lack spurs (except in rare instances), beards (present in only 5-15% of the population), and black-tipped breast feathers. Hens are about 34 inches in length, weigh from 8-10 pounds and have buff-tipped breast feathers.

The wild turkey is a polygamous species; each male will attempt to attract and mate with many females during the spring mating season. Toms attract females in spring by gobbling and strutting. When hens are in close proximity, the male will continue his courtship display by strutting. The male positions himself near the female, with wings drooped to the ground, neck and head arched inward against the body, back feathers erect, and tail arched upward and spread. He then takes several steps, often in a sideways direction, to stay in clear view of the hen. During this strutting behavior, the male emits a short “spitting” sound followed by a deep drumming sound; the “spit and drum.” 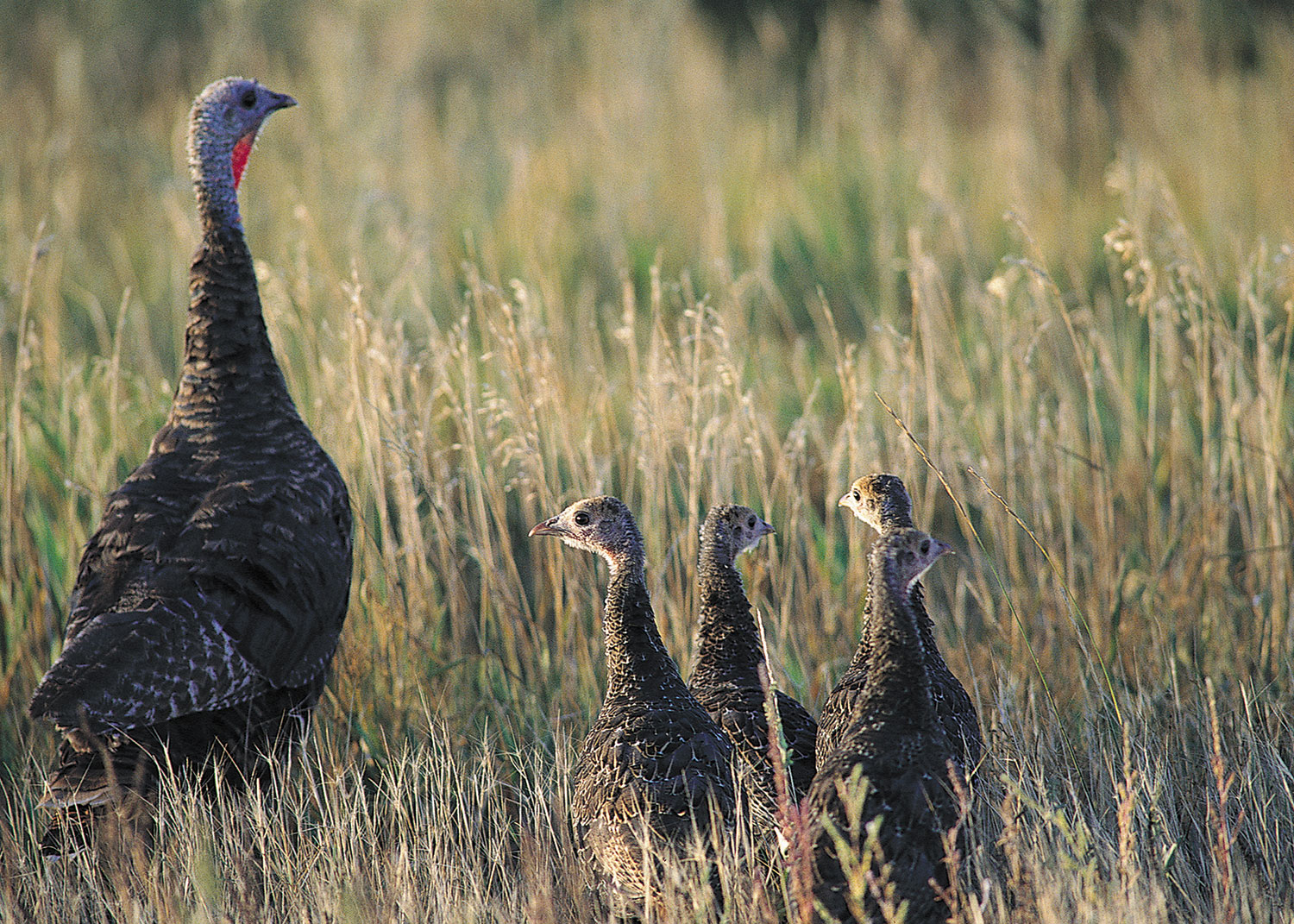 Female turkeys nest along habitat edges (intersections of grassy and shrubby cover types) or in tall grasses. Once the first egg is laid, the hen will return daily to sit on the nest and lay another egg. This process continues until the entire clutch is laid (typically 10-13 eggs). Hens will then begin incubation; a period lasting 28 days. During this time, hens are highly susceptible to predators, as they remain on the nest day and night and only leave for short periods to water, feed and defecate. Poults (young turkeys) leave the nest to forage with the female shortly after hatching.

The hen and poults will roost on the ground until the poults are old enough to fly (usually three weeks), at which point they will begin roosting in trees. Like other upland game bird species, young turkeys begin life by feeding almost entirely on insects, gradually shifting to an adult diet of berries, acorns, pine seeds and a variety of other plants.

Broods generally use small areas of their home range intensively and then move to a new area. As a result, the size of the brood’s home range increases as the poults grow. Most turkey broods will range over an area of 250 to 500 acres. 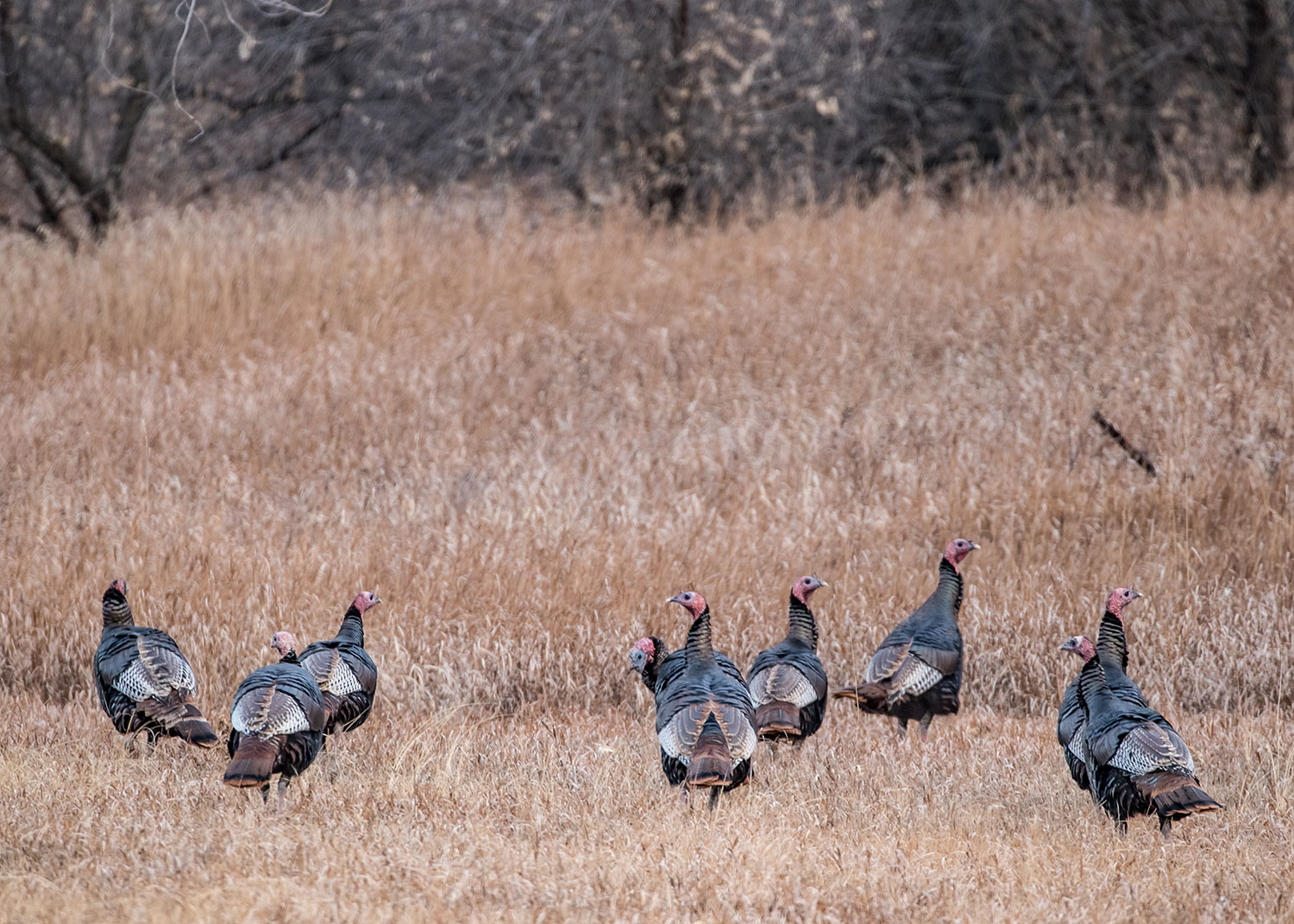 Typical turkey habitat in North Dakota consists of riparian corridors and woody draws with adequate roost trees, forage and nesting and brood-rearing habitat. In North Dakota, turkeys are found along the Missouri River and other major river systems in the state, the badlands in Billings and McKenzie counties, the pine forest in Slope County and the woodlands in Dunn, Pembina and Bottineau counties.

This winter food source is often provided by waste agricultural grain or food plots. If these components are interspersed across a reasonably sized area, wild turkeys can persist as a local population. Specifically, turkeys inhabit forested areas where food is found, and trees are available for roosting. These forests should have grassy areas interspersed among the woodlands. River valleys, woody draws and upland forests near water are preferred by wild turkeys.

In North Dakota, turkeys will utilize farmsteads and cattle feedlots in areas where winter food is not readily available. To prevent turkeys from visiting these areas, food plots or other sources of winter forage should be implemented.