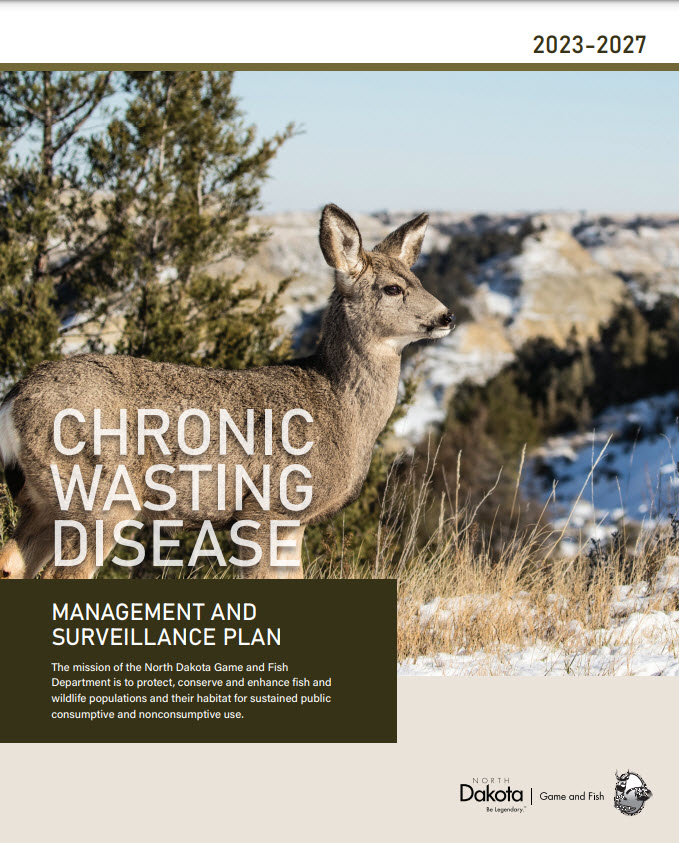 Chronic wasting disease is a long-term threat to big game hunting in North Dakota. Herds with higher infection rates produce fewer mature animals and experience higher annual death loss, thereby reducing how many animals can be sustainably harvested. The disease was first identified in North Dakota in mule deer in 2009 and white-tailed deer in 2013. It has been detected in eight deer gun units as of September 1, 2022. As the primary agency charged with protecting the state’s wildlife populations for sustained use, North Dakota Game and Fish takes the threat of CWD seriously. The Department will continue to use the best available evidence to minimize the impacts of this emerging disease.

Critical to managing CWD is a good understanding of where and how common the disease is within the state’s herd. The previous surveillance strategy tested CWD-negative units every three years but rarely received enough samples to make statistically valid inferences. In contrast, CWD-positive units were tested annually. For the purpose of monitoring disease trends, this yielded more information than necessary since meaningful changes in CWD typically occur on a multi-year-long scale. Moving forward, the Department will test all units less frequently but more intensively. Focusing resources within a smaller area will generate more accurate, informative data.

The practice of baiting exposes more deer to higher levels of CWD compared to what occurs naturally. A restriction on this practice is aimed to reduce the overall risk of contact with contaminated landscapes or infected deer, thereby slowing how quickly the disease spreads. Baiting will not be legal in any deer hunting unit that falls within 25 miles of a CWD detection.

Chronic wasting disease can be introduced into new areas by the movement and improper disposal of infected carcasses. The brain and spinal cord of an infected animal contain an especially high concentration of CWD. Left on the landscape, this can serve as a source of infection for years. Previous carcass transportation restrictions were intended to prevent the movement of potentially contaminated carcass remains from units where the disease had been detected into areas of the state assumed to be CWD-free. However, as the footprint of affected areas continues to expand, the regulatory emphasis will shift from controlling movement on the front end, to influencing disposal. Successful hunters will be able to freely move intact carcasses within the state, but carcass waste (parts not consumed or preserved for taxidermy) must be disposed of via landfill. In contrast to baiting and carcass movement, which can adversely contribute to CWD, the most useful tool in combating CWD in North Dakota is harvesting animals. By focusing hunting pressure in areas of the state where CWD is known to occur most frequently, potentially positive animals are taken off the landscape. Important thresholds for CWD within a population include first detection, 5% prevalence, and greater than 10% prevalence. These thresholds will direct how and when license allocation and access efforts will be applied to combat CWD.

Success will depend on widespread buy-in from stakeholders. As such, the Department will strive to incorporate the best available, emerging evidence into its management approach in a fully transparent manner. Communication, education, and outreach will be a critical focus of the Department to maintain support and engagement with this important and ongoing issue.