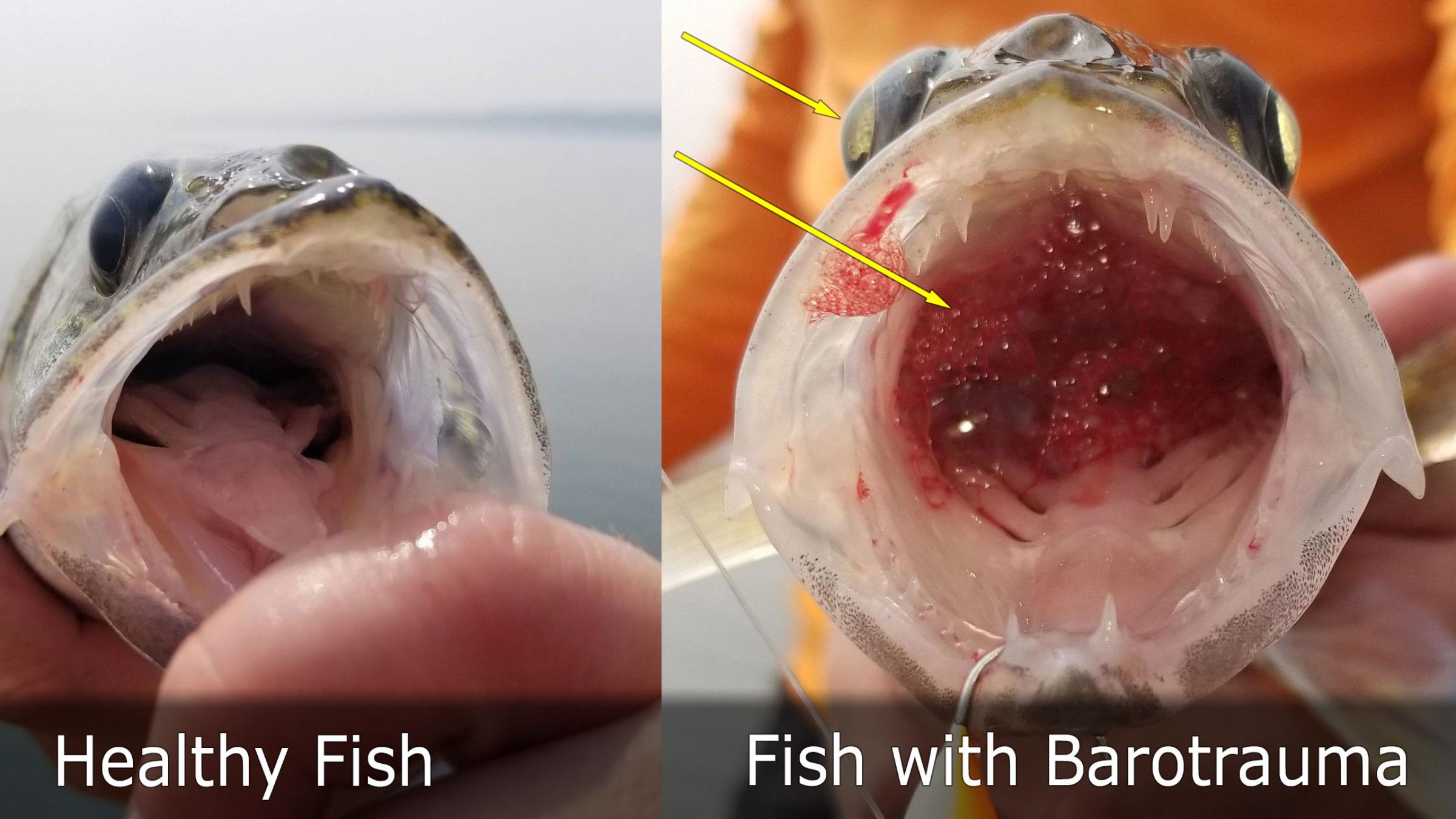 “Barotrauma” is the term used to describe any of the number of injuries, or trauma, a fish may receive from rapid changes in atmospheric (i.e. barometric) pressures. For fish caught by anglers, these rapid pressure changes occur when fish are reeled to the surface from deep water. Barotrauma injuries include things like eversion, prolapse, torsion and volvulus of the stomach, hemorrhaging of internal organs, hematomas, and loss of vision. Most internal injuries are not visible to anglers, but one obvious symptom of barotrauma is the over-inflated swim bladder, which will push the fish’s stomach out of its mouth and make it impossible for the fish to swim back to the depth it came from.

Below are the answers to a few questions concerning barotrauma the Department gets each year.

What is “fizzing,” and does it really work to increase fish survival?

Fizzing, or venting, is the procedure of puncturing a fish’s swim bladder with a sharp object, like a hypodermic needle, to release the excess gas and deflate it. Some anglers promote this as an effective means of quickly getting fish back to their original depth and pressure. However, the true effects of fizzing are not well studied, and North Dakota Game and Fish does not promote this. By puncturing a fish’s swim bladder, the fish will lose its ability to regulate buoyancy until the puncture wound heals. Fizzing fish, or returning them to their capture depth by any means, can relieve some symptoms of barotrauma. However, many of the internal injuries from barotrauma are not remediated simply by returning the fish to its original depth. The few studies on this matter have shown that even if a fish swims away after it’s been fizzed, it may have lasting injuries that lead to death at a later time.

I’ve read that reeling in a fish really slowly can help. Is that true?

In most cases, no. Some fish species, like salmon, pike or catfish, have a pneumatic duct that they can use to release, or “burp,” gases from their swim bladder. But many species in North Dakota, like walleye, perch and bass, do not have this duct. They regulate gases in their swim bladder through their bloodstream, which takes quite a long time. So when most anglers consider reeling a fish in slowly (say 3-5 minutes) to allow them to release gas from their swim bladder, it’s not nearly slow enough to be effective (more like 20-30 minutes).

What does the Department suggest an angler do when it comes to this issue?

As stated above, there is no immediate and certain fix to deal with fish that are released after being caught from deep water. Again, the Department strongly recommends that if one is fishing in waters deeper than 25-30 feet, that the angler makes a conscience decision to keep everything that is caught – or – simply spend your time fishing in shallower depths where barotrauma is not an issue.

How about the few lakes in North Dakota that have length minimums in place?

Most of the waters in North Dakota that have length limits do not have much for deep water to start with. In the few lakes that have deeper water and length restrictions (e.g. Jamestown and Pipestem reservoirs), anglers should simply avoid fishing the small areas that hold deep water.