“Barotrauma” is the term used to describe any of the number of injuries, or trauma, a fish may receive from rapid changes in barometric pressures.

For fish caught by anglers, these rapid pressure changes occur when fish are reeled to the surface from deep water.

Barotrauma injuries include things like eversion, prolapse, torsion and volvulus of the stomach, hemorrhaging of internal organs, hematomas, and loss of vision.

Barotrauma often leads to mortality, either immediate or delayed.

Note: Most internal injuries are not visible to anglers. 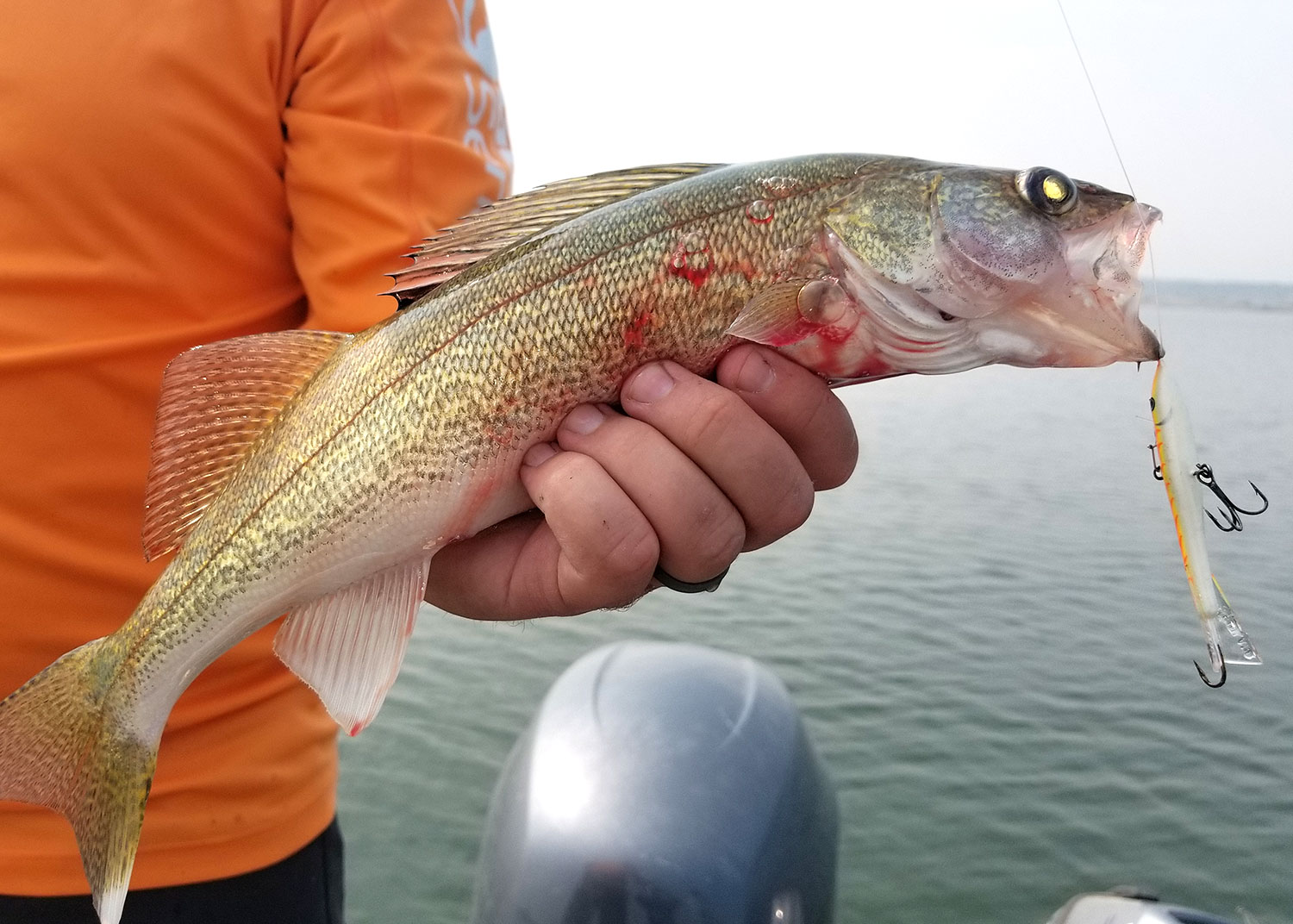 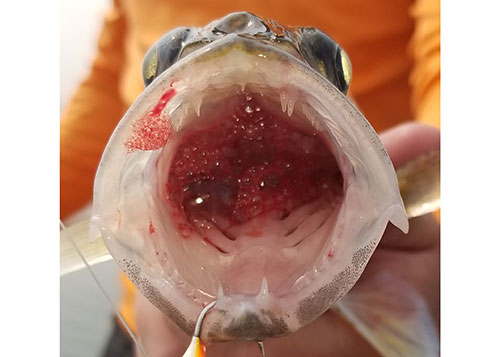 Injuries caused by barotrauma may cause immediate mortality or may lead to changes in a fish’s behavior or delayed mortality, even if the fish appears fine when it swims away. For example, a fish with swim bladder damage when released may be unable to right itself or swim back to its original depth. Fish unable to submerge are subject to stress from higher surface temperatures or sun exposure, being struck by boats or increased predation as they become easy prey for birds like gulls or pelicans.

Some fish, such as largemouth bass, smallmouth bass, white bass, walleye and yellow perch, are more susceptible to barotrauma than others.

Fish like walleye, perch or bass do not have this duct and regulate their swim bladder by releasing gasses through the gills via the bloodstream (similar to how a human lung exchanges oxygen and carbon dioxide in the blood). This is a much slower process, and results in the bloated appearance of the swim bladder when a fish is reeled in from deep water.

In numerous studies across North America, largemouth bass, smallmouth bass, white bass, walleye and yellow perch have exhibited increased mortality due to the effects of angling barotrauma. The depths of those effects varied depending on the study lake or fish species, but in general most studies have shown a dramatic increase of mortality when depths exceed 10 meters or roughly 33 feet

Where is barotrauma a problem? 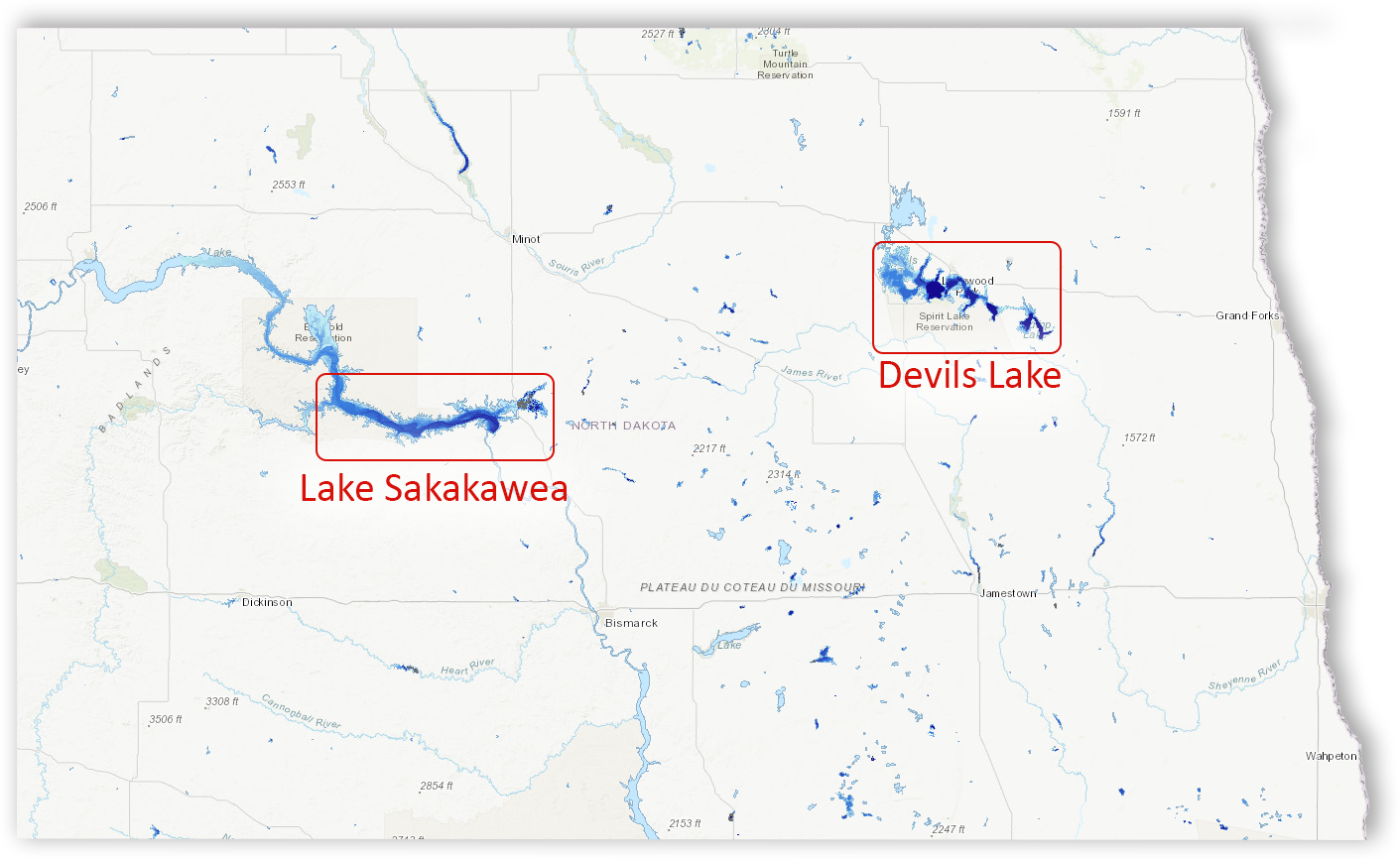 Barotrauma is not an issue everywhere in North Dakota because most shallow prairie lakes seldom exceed 33 feet in maximum depth.

Concerns are highest in larger, deeper bodies of water like Lake Sakakawea or Devils Lake.

Walleye in Lake Sakakawea are notorious for moving deeper in pursuit of rainbow smelt, a cold water forage fish that also seeks deeper water as summer warms up.

At Devils Lake, barotrauma has become more common as water depths increased beginning in the early 1990s. In summer, walleye, especially large fish, will often be found at cooler depths, spread out among the deeper basins of the lake. In winter, the concern of barotrauma focuses on yellow perch, the prime target of winter anglers at Devils Lake for decades.

When a younger year-class of perch is approaching harvestable size, anglers will often sort through a lot of smaller perch in search of a keeper, and this becomes a concern when many of the released fish cannot swim away on their own due to barotrauma. 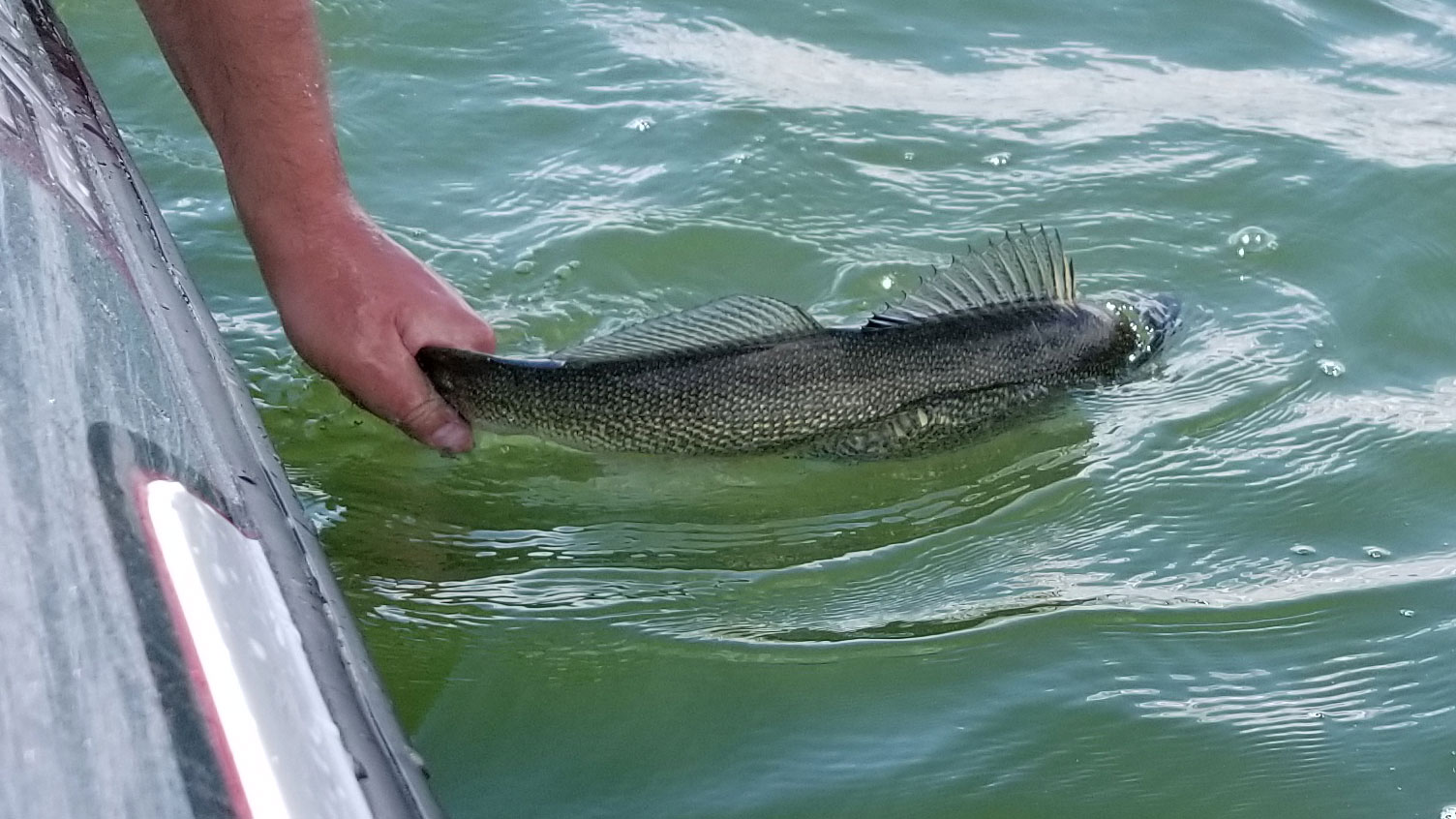 Anglers should refrain from practicing catch-and-release for fish like bass, walleye or yellow perch caught from deep water.

Anglers who choose to fish in deep water should intend to harvest fish they catch, up to their daily limit.

Anglers who wish to practice catch-and-release should target fish in shallower water to maximize survival of the fish they release.

What is “fizzing/venting” and does it really work to increase fish survival?

Fizzing, or venting, is the procedure of puncturing a fish’s swim bladder with a sharp object, like a hypodermic needle, to release the excess gas and deflate it. Some anglers promote this as an effective means of quickly getting fish back to their original depth and pressure.

However, the true effects of fizzing are not well studied, and North Dakota Game and Fish does not promote this.

By puncturing a fish’s swim bladder, the fish will lose its ability to regulate buoyancy until the puncture wound heals.

Fizzing fish, or returning them to their capture depth by any means, can relieve some symptoms of barotrauma. However, many of the internal injuries from barotrauma are not remediated simply by returning the fish to its original depth.

The few studies on this matter have shown that even if a fish swims away after it’s been fizzed, it may have lasting injuries that lead to death at a later time.

While venting is not directly outlawed in North Dakota, the process requires an angler to handle and hold the fish for some length of time while the swim bladder deflates, creating a situation where an angler may be in violation of the requirement to immediately release fish after capture.

What are descending devices and do they really work to increase fish survival?

Descending devices such as drop weights, a weight attached to the fish’s lip that sinks them to their original depth for release, are another tool that some anglers have used to quickly compress the swim bladder to its original pressure.

While a descended fish does indeed swim away more readily, survival is not guaranteed.

Descending doesn’t require the angler to handle the fish or puncture the swim bladder, and ultimately results in a quicker release.

Descending, like venting, only addresses the swim bladder symptom of barotrauma, and does not reverse other potentially fatal injuries like hemorrhaging of the liver, heart or other organs, as well as hematomas that produce internal bleeding. These injuries may lead to increased mortality for many of the fish released and, thus, anglers taking action to reduce barotrauma mortality may be responsible for killing more than their daily limit even if they use one of the widely promoted techniques.

I’ve read that reeling in a fish really slowly can help. Is that true?

In most cases, no. Some fish species, like salmon, pike or catfish, have a pneumatic duct that they can use to release, or “burp,” gases from their swim bladder.

But many species in North Dakota, like walleye, perch and bass, do not have this duct.

They regulate gases in their swim bladder through their bloodstream, which takes quite a long time.

So when most anglers consider reeling a fish in slowly (say 3-5 minutes) to allow them to release gas from their swim bladder, it’s not nearly slow enough to be effective (more like 20-30 minutes).

What does the Department suggest an angler do when it comes to this issue?

As stated above, there is no immediate and certain fix to deal with fish that are released after being caught from deep water.

Again, the Department strongly recommends that if one is fishing in waters deeper than 25-30 feet, that the angler makes a conscious decision to keep everything that is caught – or – simply spend your time fishing in shallower depths where barotrauma is not an issue.

How about the few lakes in North Dakota that have length minimums in place?

Most of the waters in North Dakota that have length limits do not have much for deep water to start with. In the few lakes that have deeper water and length restrictions (e.g. Jamestown and Pipestem reservoirs), anglers should simply avoid fishing the small areas that hold deep water.