Cable devices to be legally used in North Dakota must possess a lock or breakaway device that disassembles at 350 pounds pull or less. The following standard defines the process, procedures, and equipment for conducting breakaway load testing of cable devices (e.g. snares) designed for the purpose of taking furbearing animals in the state of North Dakota. This standard is intended to provide for consistency in the construction of testing equipment and the testing procedure used in determining cable device compliance with North Dakota regulations.

Cable devices used for the purpose of taking furbearers in North Dakota must have a breakaway device that will allow the cable loop to disassemble at a pulling force of 350 pounds or less. While different mechanisms may be used for this purpose, disassembly of the device must occur when the cable loop has been placed around a mandrel of a nominal 2 inch diameter steel pipe and the tensile force in the anchor side of the cable reaches 350 pounds or less.

Two different test methodologies are allowed under this standard. The first methodology (dead weight test) uses a go/no-go criterion in which it must be confirmed that the cable device loop successfully disassembles under a static load that does not exceed 350 pounds. The second methodology (ramped load test) uses a load frame with a force transducer (load cell) that records the peak load at which the cable device loop disassembles. Both methodologies make use of the same test fixture design to secure the cable loop.

The test fixture must consist of a cylindrical steel mandrel made from a nominal 2 inch diameter steel pipe (Schedule 40) that can freely rotate about its central axis on a 0.5 inch diameter steel pin or bolt, which is in turn supported in a clevis fixture. The loop end of the cable device should be placed around the mandrel with the locking mechanism oriented in the direction of pull on the cable. The anchor end of the cable must be safely restrained in a fixture on the opposite end of the testing device (see Figure 1). 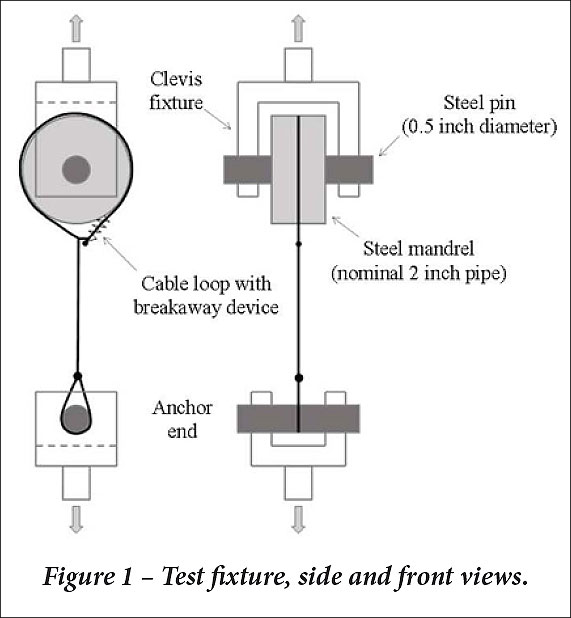 Procedure The fixture on the anchor end of the cable should be secured to a static weight of 345 ± 5 lb. (Note, this weight equates to approximately 0.7 cubic feet of steel, 0.75 cubic feet of cast iron, or 2.25 cubic feet of concrete). The clevis fixture on the loop side of the device should be attached to a mechanism capable of lifting a 350 pound weight off the ground at a uniform speed. With the loop end of the cable device positioned around the mandrel and the anchor end suitably fixed to the static weight, remove all slack from the cable by hand-tightening the loop around the mandrel and raising the clevis fixture until the cable is taut. The test may then be conducted by raising the clevis fixture at a uniform speed in the range of 5 - 120 inches/minute.

This test must be performed on a load frame actuated by suitable means (mechanical, hydraulic, or pneumatic) that is capable of achieving loads in excess of 350 pounds and which has sufficient stroke length to cause total loop separation of the cable device. The test frame must be capable of exerting a uniform rate of displacement at a speed in the range of 5 - 120 inches/minute. A force transducer (load cell) with a capacity exceeding 350 pounds and resolution of 3 pounds or smaller, must be used to record the breakaway load. The force transducer must be calibrated within an accuracy of ± 2% of the applied load. 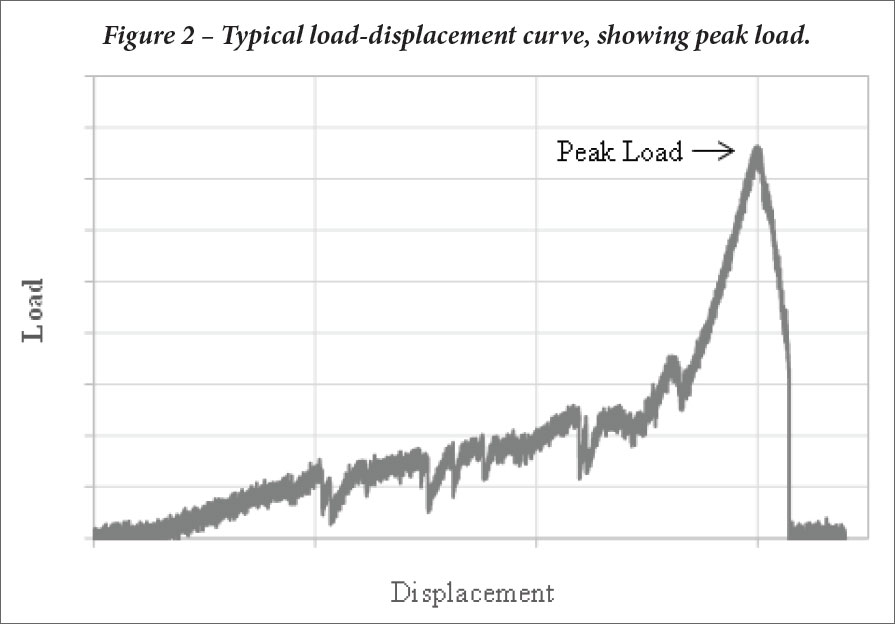 With the loop end of the cable device positioned around the mandrel and the anchor end suitably restrained in the opposite fixture, remove all slack from the cable by hand-tightening the loop around the mandrel and extending the load frame until the cable is taut. The test should be performed in displacement (stroke) control at a uniform speed in the range of 5 - 120 inches/minute. The force must be continually monitored to determine the peak load applied to the cable device prior to loop disassembly. The breakaway load is defined as the maximum force recorded on the load-displacement diagram (see Figure 2), corresponding to the peak load measured by the force transducer.

A minimum of 3 identical samples must be tested for determination of legality of each type of cable device. To ensure the cable devices are legal for use in North Dakota, all 3 samples must successfully disassemble at 350 pounds or less. Cable devices then constructed in the exact same manner and with identical materials would also be considered legal for use in North Dakota. Any change in construction, materials, or any other alteration or modification of a cable device from the samples tested shall render the test results void for all such altered cable devices.