Landowners or hunters who encounter feral pigs in North Dakota must notify the State Board of Animal Health immediately.

While the state doesn’t want established populations of wild pigs to develop, it also doesn’t want individuals to try to eliminate suspected problem animals. Therefore, shooting of feral pigs is illegal in North Dakota unless a person is protecting property or livestock.

Casey Anderson, North Dakota Game and Fish Department assistant wildlife division chief, said seeing an apparent wild or feral pig is not as uncommon as you might think, as feral swine have been detected in North Dakota on numerous occasions since 2007. One of those occurred last fall.

“With people out in the field hunting upland game and other animals, we want to let hunters know they cannot shoot them, but instead they need to report immediately if they see feral pigs or observe signs such as rooting,” Anderson said.

State law requires reporting feral pigs so the BOAH and other agencies are aware of them and can then quickly set up a plan to eliminate these nuisance animals. The reporting rule also prevents hunters in the field from shooting what they may think is a feral pig, and finding out later it was a domestic pig that had simply wandered off from a nearby farm.

Once feral pigs get established and start having young, they are difficult to eliminate from the landscape.

A task force consisting of several state and federal agencies have taken aggressive action to eliminate suspected feral pigs due to the threat to domestic livestock, agricultural crops, public safety, natural habitat and wildlife because of their destructive nature and potential to transmit diseases.

“They are very hardy,” he said, “that’s why immediate action is essential.”

A landowner may eliminate wild pigs on his or her land if they pose an immediate threat, but must contact the BOAH within 24 hours. The landowner must follow any instructions given by the board regarding the handling, preservation and disposal of the carcass.

“We’ve had a few situations in which individuals saw wild pigs on their property, or on property they were hunting, yet did not report it to the North Dakota State Board of Animal Health,” Anderson said. “There will be serious consequences if feral pigs establish a permanent population in the state.”

Aside from their potential to transmit diseases, Anderson said rooting and

Feral pigs, by definition, can be stray domestic pigs that have adapted to living in the wild, introduced Eurasian wild boars, or varied hybrids of each.

“They often split into separate groups once their numbers reach a certain threshold,” Anderson said. “That is why it is imperative immediate action is taken.” 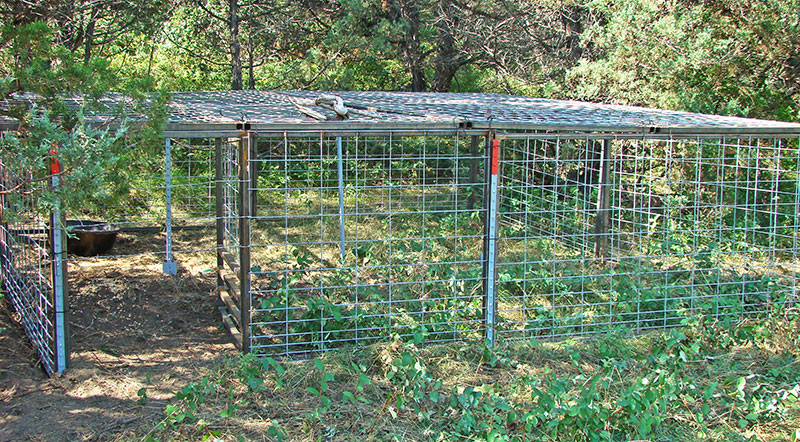 The first documented report of feral pigs in North Dakota was confirmed in summer 2007, when state and federal agencies became aware of two separate bands: one in the western badlands southwest of Grassy Butte, and another in the Turtle Mountains.

Since then, feral pigs have been reported in several other areas of the state.

In each case, the pigs were captured and/or killed, and at this time North Dakota does not have any known established local feral pig populations.

“We’d like to keep it that way,” Anderson said.

According to scientists, 30-plus states have feral hog populations. These animals were introduced to the United States in the 1500s by Spanish explorers.

Today, the U.S. Department of Agriculture estimates more than 5 million wild hogs in the U.S. These animals are said to cause $1.5 billion in damages each year.

According to a recent article in the Missouri Conservationist Magazine, feral hogs became a problem in that state in the late 1990s.

Eradicating established feral hog populations is difficult, no matter the state. Missouri wildlife managers, for instance, have tried many methods, but found that trapping worked best. In 2015, Missouri Department of Conservation staff and partners removed nearly 3,700 feral hogs from the state.

In Missouri, like North Dakota and other states, wildlife officials ask people to report feral hog sightings immediately. Hunters who shoot at the animals scatter them, complicating trapping and other eradication efforts.

Anyone who observes or suspects the presence of feral pigs should call local law enforcement, the North Dakota Board of Animal Health at 701-328-2655, Game and Fish Department at 701-328-6300, or United States Department of Agriculture Wildlife Services at 701-250-4405.