Old Burt - A Tribute to the Art of Burt Calkins

Editor’s note: Burt Calkins, a prolific contributor of artwork and stories to this magazine over the years, passed away last February due to complications from lung cancer.

We asked Harold Umber, a long-time friend and also editor of North Dakota OUTDOORS for more than 16 years before retiring in 2003, to share some insight into Burt’s life to go along with some of our favorite illustrations that he contributed to the magazine.

In addition, many of Burt’s original paintings and limited edition prints of North Dakota’s scenery and wildlife grace living room and office walls around the state. Longtime readers will recognize his work, and we’re sure that recent subscribers will enjoy it.

Burdette (Burt) Bond Calkins was a wildlife artist, wood carver, writer, father, hunter and one of the original “Old Guys.”

Over the years he did a lot to make North Dakota OUTDOORS a better and more interesting magazine. His paintings, drawings and writings graced these pages frequently for more than 20 years. 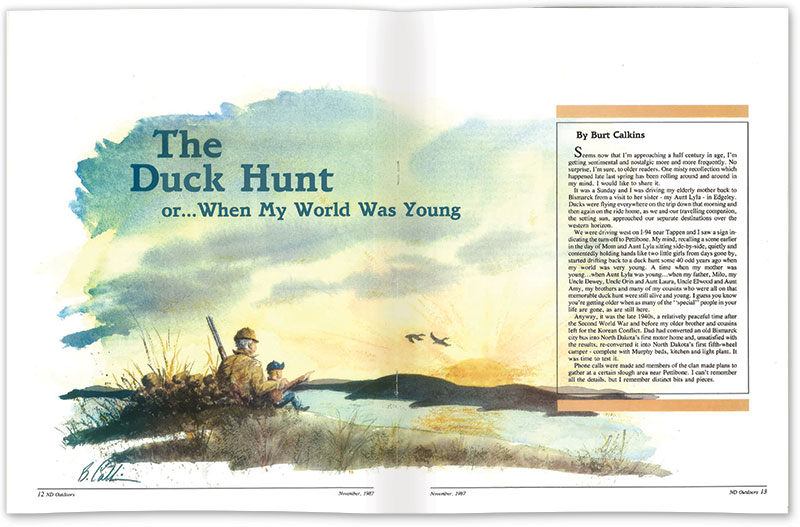 Many of Calkins’ illustrations accompanied his stories that captured the need for conservation and the enjoyment of hunting and fishing in North Dakota.

While he saw some benefit in the exposure it gave him as an artist, that was not his primary purpose. He did it because he wanted to share the beauty of the state, its wildlife and the value of conservation. He had stories to tell and he wanted readers to understand what it meant to grow up and live here, and he did it because he thought it worthwhile to share an appreciation for special places with a wider audience.

One of my favorite articles was A Little Piece of Creek published in September-October of 1989. In it he shared what it meant to have access to a place that provided a connection to his youthful wanderings, a place where the landowner’s wise use had maintained the qualities he so much appreciated. He wrote, “...it’s important to the continuity of my life. Too many things change too fast these days.”

Implicit in the story was the importance of trust between landowners and those who would seek access to their property. He never overextended his welcome and was careful to limit his visits to outings with his son or a friend. He liked to invite me because he said I was really easy on game and the barrel on my shotgun was bent to the left.

We enjoyed our time on his little piece of creek. It was his in the sense that he didn’t have to own it to enjoy it, and that is what was important to him. He valued it for what it provided for wildlife, and for the landowner’s wisdom in preserving the integrity of this free-flowing prairie stream that was so much a part of him.

Burt and I were friends for more than 55 years.

He lived and worked in many places in the United States, from the East Coast to Alaska. He visited China and taught art classes to Chinese kids. He talked of Austria and Wales as places he would like to visit. His successes overshadowed what most of us have experienced, but he always wanted more and lamented not traveling more, doing more.

His sense of place though, was North Dakota, and he would always come back home. Many of his childhood friends and family members live here. He was a North Dakotan through and through and he had the prairie in his blood, and that carried over into hundreds of pieces of art he generated in his lifetime.

Burt worked mostly in watercolors and he loved painting birds. Whooping cranes and sandhill cranes often were subjects of his paintings. He spent some winters in south Texas near Aransas National Wildlife Refuge, famous as a winter home for the endangered whooping crane. 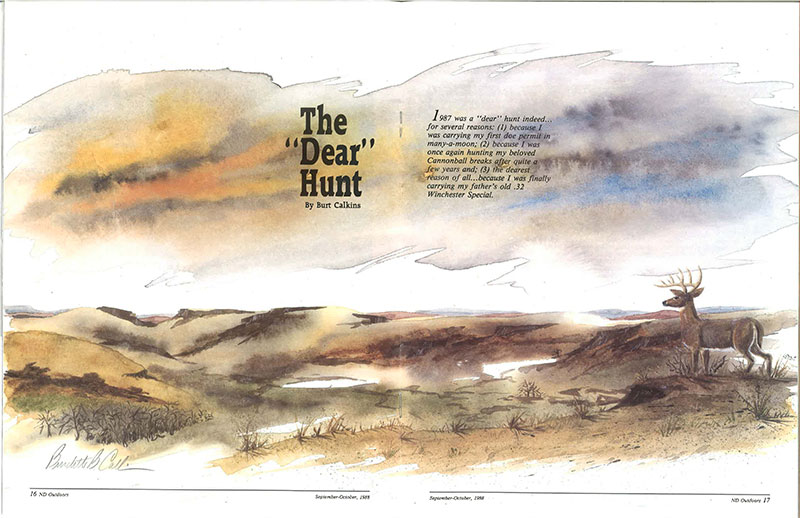 Scenes that portrayed the vastness and value of North Dakota’s prairies were trademarks of Burt Calkins’ artwork.

He later moved to Socorro, New Mexico, lured by nearby Bosque del Apache National Wildlife Refuge, a prime wintering area for cranes and waterfowl. He settled into the community and made friends who opened up a wider world to him.

In addition to his success as a painter, Burt was also a graphic artist whose skills were put on display with his design of the 1989 North Dakota Centennial Logo and the North Dakota license plate that followed in 1993. The new plate became known to some as the buffalo plate and carried forward the theme Discover the Spirit until it was replaced in 2015.

The inspiration was provided by “Two Sentinels,” his watercolor depicting western North Dakota’s Sentinel Butte, and a bison bull that was evocative of North Dakota’s western heritage. He added some stalks of wheat and adapted the watercolor to fit the blue and gold color scheme that was carried over from the old to the new license plate.

The new plate was awarded the best license plate design in 1993 by the Automobile License Plate Collectors Association.

Some folks thought of Burt as a loner but a loner is one who for whatever reason retreats into himself and for all practical purposes rejects many aspects of the immediate world around him. That was not Burt. His curiosity and love of learning led him to develop long-lasting relationships with individuals from all walks of life; people who sparked his interest and were willing to share their time and knowledge. He was outgoing, smart, funny, compassionate and comfortable in his own skin. He liked to stay in contact.

When he was back home we always tried to find time to do something outdoors even if for only a few hours. It didn’t happen last fall and when he headed south for the last time I knew in my heart of hearts that our story was about to end and we had gone on our last hunt.

Burt’s contributions made the world a better place and for those of us who knew him, his absence creates a void that will not be filled. There will be fewer laughs, fewer stories and less beauty in the world.

At the end of some cool October afternoon when thousands of ducks and geese begin their push through the north hole in the sky, I will sit alone and remember a warm day when mallards and pintails came in so close you could almost touch them: I will remember a cold day at the edge of an open hole in ice-covered Salt Lake waiting for ducks and geese to return from feeding.

And I will remember the old taped up 12 gauge side-by-side that served him so well on so many bird hunts for so many years.

Those hunts will live on in my heart and mind as special memories. That will have to be enough.