The snapping turtle, an ancient survivor and widespread inhabitant of North Dakota waters, could use an image makeover.

This shy, reclusive turtle, with its algae-covered shell and large claws, is always a surprise to those fortunate to see one. Native American tribal mythology and lore are replete with references to turtles, symbolizing wisdom, benevolence, emotional strength, persistence and determination. To the North Dakota Game and Fish Department, the snapping turtle is also an important species for which more information is needed for their sustainable management.

Turtles appeared on the earth more than 200 million years ago; and are the oldest living groups of reptiles on earth. Today, the snapping turtle found in North Dakota is widely distributed in the United States east of the Continental Divide, with similar subspecies found down into Mexico and parts of central and South America.

North Dakota is near the northwestern edge of their natural range, although they are also found up the Yellowstone and Missouri River drainages into eastern Montana. 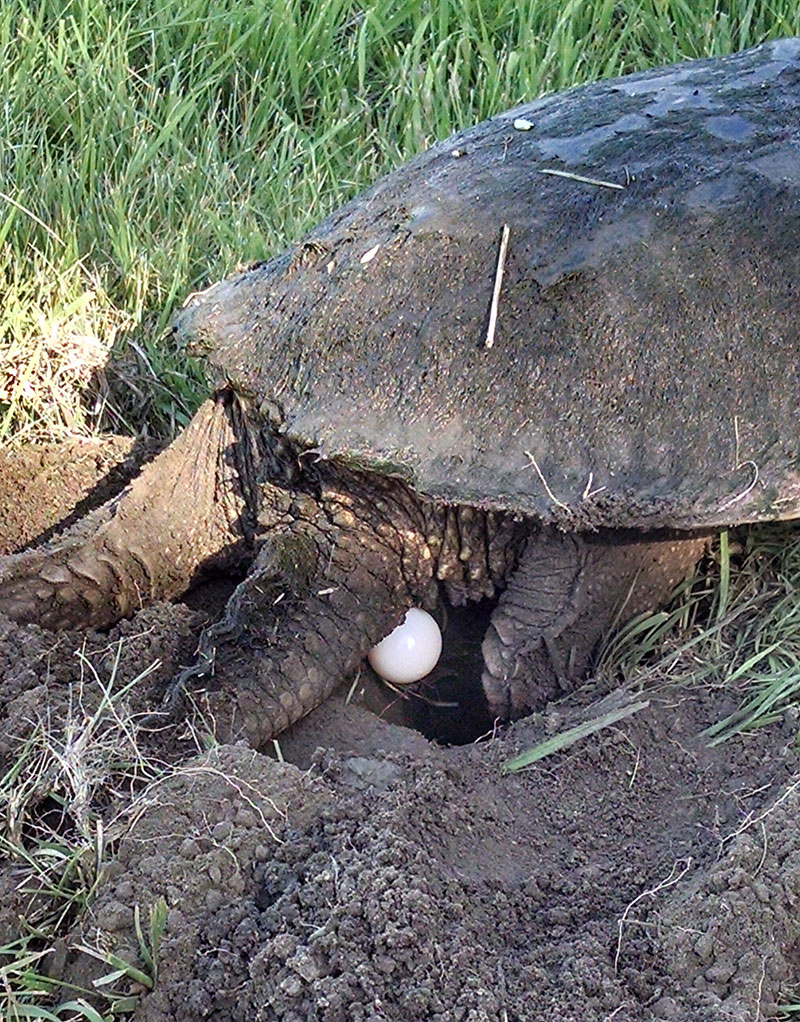 An adult snapping turtle (left) depositing eggs in a nest dug near a sidewalk at the Game and Fish Department headquarters in Bismarck.

Snapping turtles are the largest of the five turtle species found in the state. Western painted turtles are the most common, while the false map, smooth softshell, and spiny softshell turtles are found only in a fairly restricted range in south central North Dakota, in Lake Oahe and a few of its main tributaries.

The snapping turtle has a life history that has served it well across geologic time. They are long-lived, reaching 40 years old in the wild, and perhaps older. Females may not mature for 10-17 years, depending on the population and latitude (older in northern states such as North Dakota).

Even after this long pre-maturation period, they may nest only every other year or every third year. Over the ages, they have survived with this slow reproduction cycle because of a high survival rate once the turtles have passed their first few years of life.

Snapping turtles migrate out of water to a suitable nesting site in spring or early summer. Nest sites can include gravel bars, lake shores, muskrat huts and beaver lodges. In a world increasingly occupied by humans, their nesting areas have expanded to include some less-than-optimal areas for avoiding disturbance, including gravel roads, road shoulders and railroad grades.

Once a suitable site is found, turtles dig a hole, deposit their eggs and pack the dirt tightly back on top. Then the female migrates back to water and the eggs are left to develop and hatch. After hatching, young turtles dig their way out of the nest and seek water.

The result is that a different ratio of males and females are produced from nests that are close to each other; even a nest that is in the same spot as it was in a previous year.

At a few times throughout a snapper’s life, they become vulnerable to mortality. Most of these times revolve around nesting, whether it is the adult female migrating to lay eggs or the hatchlings migrating back to water. 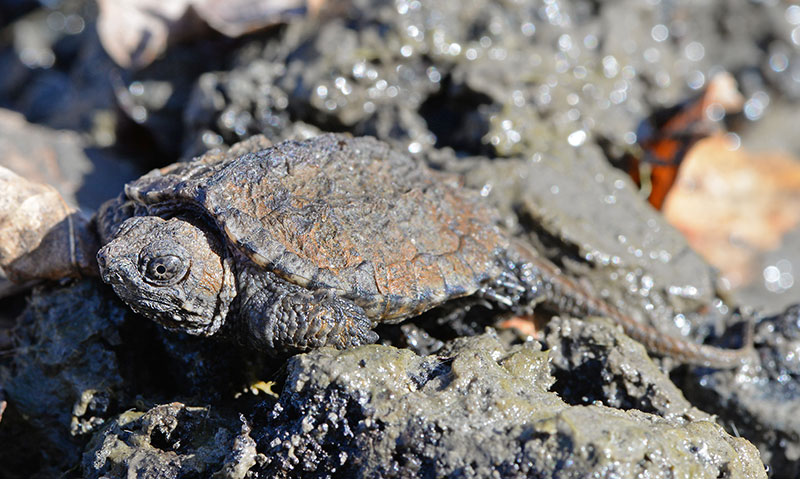 A young and tiny snapping turtle photographed near the Red River.

Females traveling to and from nesting sites are exposed to threats not found in the water, such as vehicles on roads. Snappers can rise up on their surprisingly long legs and move fairly well on land, but are no match for moving cars. They are particularly vulnerable when they select a nest site on dirt/gravel roads or on the shoulders of paved roads. They also like to build their nests around dawn and dusk, when they are hard to see by passing motorists.

After the female lays her eggs, she abandons the nest. This lack of parental care leaves the eggs vulnerable to predation by many furbearers, snakes, birds and humans. In some areas, 100 percent of the nests are destroyed by predators.

Incubation may take 70-100 days, sometimes longer, depending on the temperature. Once the turtles hatch they still aren’t in the clear, as they first need to make it to water, and even then they are still prey to many of the same egg-eating predators, plus frogs, other turtles and fish.

When young, snapping turtles are not good swimmers and can drown in shallow water. They remain quite vulnerable until about age 2, when they are big enough that many predators can no longer eat them and they are more effective swimmers. Unlike the more common painted turtle, which has a large underside to its shell called a plastron, the snapper has only a small plastron, and it affords little protection when attacked.

In North Dakota, the other time that snappers are vulnerable to predators is in winter as they hibernate under the ice. During this time they become sluggish, show little or no movement for long periods, and slow their metabolism.

This ancient species is perhaps not fully appreciated. Some of the bad reputation comes from their surly disposition when poked and prodded by humans. One thing that distinguishes snappers from painted turtles is they cannot simply pull their neck, legs or tail all the way inside their shell, which leaves them vulnerable to predation, and has led to their evolving a strong response when disturbed.

When they are in the water they will simply swim away from a perceived threat. But on land, they often display an aggressive behavior characterized by hissing and snapping at anything within neck’s reach. And their necks can extend a long way.

Snappers have no teeth, but their upper and lower jaws are designed to hold and tear. While they have a strong bite, tales about them biting through broom handles and pliers are false. Even so, a 40-pound turtle on the end of your finger can break it, or even sever it, making for a bad day outdoors.

The species simply needs to be respected, left alone and only handled when absolutely necessary.

Another myth contributing to the snapping turtle’s bad reputation is that they eat exclusively fish and ducks, leading to population declines of desirable sport fish and game species.

The snappers’ diet may occasionally consist of game fish and ducks, but it is made up of many different things. Snappers are opportunistic and will eat fish, turtles, birds, snakes, vegetation and insects, and they will often scavenge dead animals.

Snapping turtles have an excellent sense of smell both in and out of the water, so decaying flesh leaves an odor easily followed to its source.

The North Dakota Game and Fish Department has long viewed the state’s snapping turtles as a valuable resource that warrants conservation and management. Accordingly, the agency recently sponsored a study through its State Wildlife Grants program to obtain more information on this special species.

Researchers used a variety of sources to determine distribution, including the Game and Fish Department’s fisheries sampling database, state and federal agency personnel knowledge, and field sampling in counties where records were lacking or suspect.

At least 41 of the 53 counties in the state have snapping turtles, according to the study, but researchers were not able to verify their presence in the other 12 counties, perhaps as a result of sampling limitations. 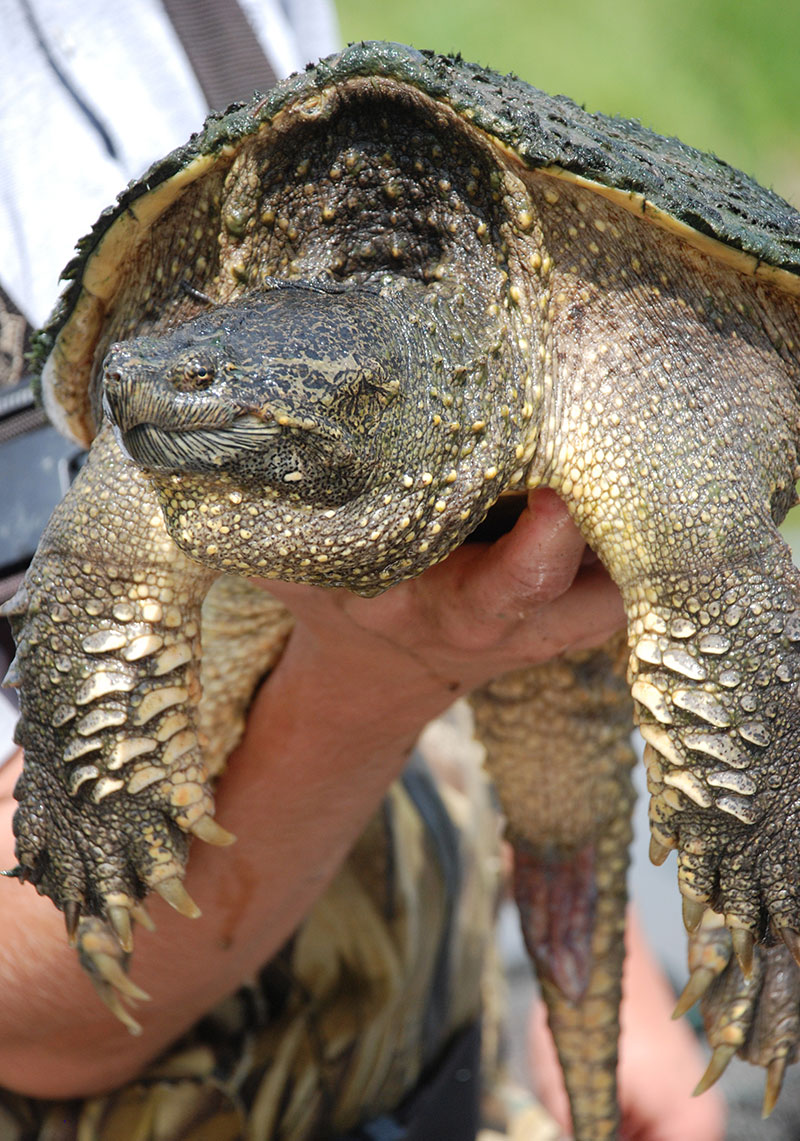 Some snapping turtles live up to 40 years in the wild.

(Editor’s note: See the bottom of the page concerning the 12 counties, and who to contact to provide documented evidence of snappers in any of those counties.)

The goal of the study was to learn as much about snapping turtles as possible. Data collected included weight, length and sex of each turtle. A photograph was taken of the top shell, or carapace, and its scutes, which are the pentagonal shapes that make up the shell. These scutes develop a ring for each year the turtle is alive, much like tree rings. Once the images are enlarged on a computer screen, the rings are counted to estimate the turtle’s age.

For three specific river-reservoir systems (Lake LaMoure, Nelson Lake and Patterson Lake), researchers sought information on age and growth, population size, overwintering locations and nesting areas. Sampling adequate numbers of turtles was a challenge, as for every snapping turtle captured, three or more painted turtles were sampled, indicating that the snappers, although widely distributed, are not abundant in most locations.

Researchers also did not find many small snapping turtles, suggesting that reproductive success is usually low. Even at Lake LaMoure, where turtles were most easily caught, the population estimate was only 40 snapping turtles. In future studies, more information is needed on actual population sizes of turtles in key waters.

The maximum age of turtles was estimated at 25 years, although it was not possible to validate those ages and older turtles may have been present. Among all lakes, a 44-pound turtle would be 16 years old; for Lake LaMoure, where growth was faster, it would only be 10 years old.

Turtles in Lake LaMoure were found overwintering in tight groups, a characteristic reported in other states and provinces. Using an underwater camera lowered through a hole in the ice, researchers were able to observe both tagged and untagged turtles in these groups.

Such areas within lakes may need monitoring and protection, as group overwintering sites leave turtles vulnerable to mass harvest. Although they can hibernate for some months under water without oxygen, changes in water levels could affect the turtles by exposing them to the risk of freezing. For turtle conservation in North Dakota, more studies are needed on factors affecting nesting success and specific ways to improve survival so that more adult turtles survive.

Some other outcomes of the study included recognition of the need to develop a formal management plan for the species, incorporate turtle reporting into Game and Fish’s statewide fisheries sampling, as turtles are incidentally caught (thereby improving monitoring), and the need to develop more scientifically sound management regulations and reporting.

Evidence from the study suggested that snapping turtles were not abundant in many localities. Current Game and Fish harvest regulations reflect this reality: only one turtle per person per year is allowed, and only between July 1 and November 15. This regulation is designed to protect the turtles when they are most vulnerable, during nesting and when overwintering.

Snapping turtles are an important component of North Dakota’s rivers, streams, lakes and reservoirs and deserve careful management. They are also a good biological indicator on the health of systems where they are found.

Increasingly focused turtle management efforts by the Game and Fish Department is an indication that it is time for recognition of snapping turtles as one of the state’s special species.

Christopher Dekker worked on this study as part of a Master of Science degree in the Department of Fish and Wildlife Sciences at the University of Idaho. He is now a conservation officer with the South Dakota Department of Game, Fish and Parks, in Winner, South Dakota. Dennis Scarnecchia is professor of fisheries at the University of Idaho. Patrick Isakson is a conservation biologist, and Fred Ryckman a recently-retired fisheries supervisor, both with the North Dakota Game and Fish Department. 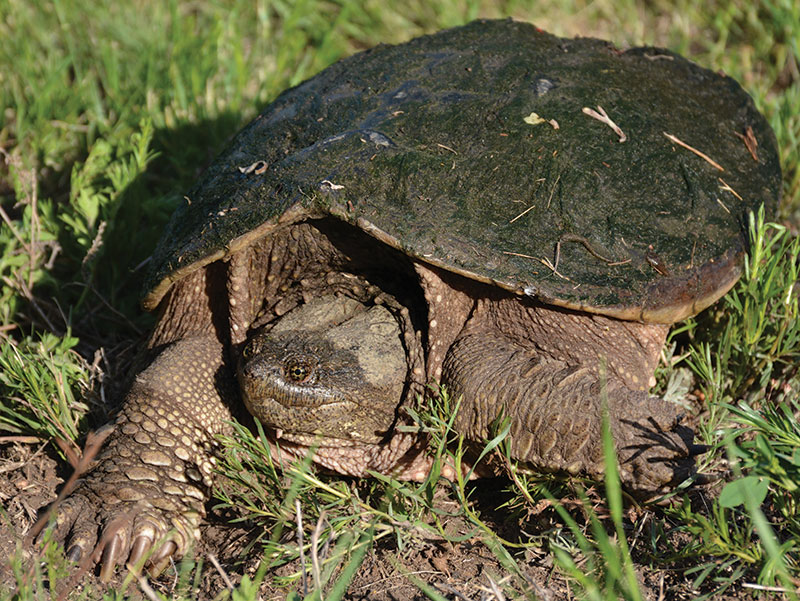 The Game and Fish views the state’s snapping turtles as a valuable resource that deserves conservation and management.

Researchers ask that if anyone has documented evidence of snapping turtles in any of the 12 counties to contact Patrick T. Isakson, North Dakota Game and Fish Department conservation biologist, 701-328-6338.