In the upper reaches of Lake Sakakawea and Lake Oahe, channel catfish rule. 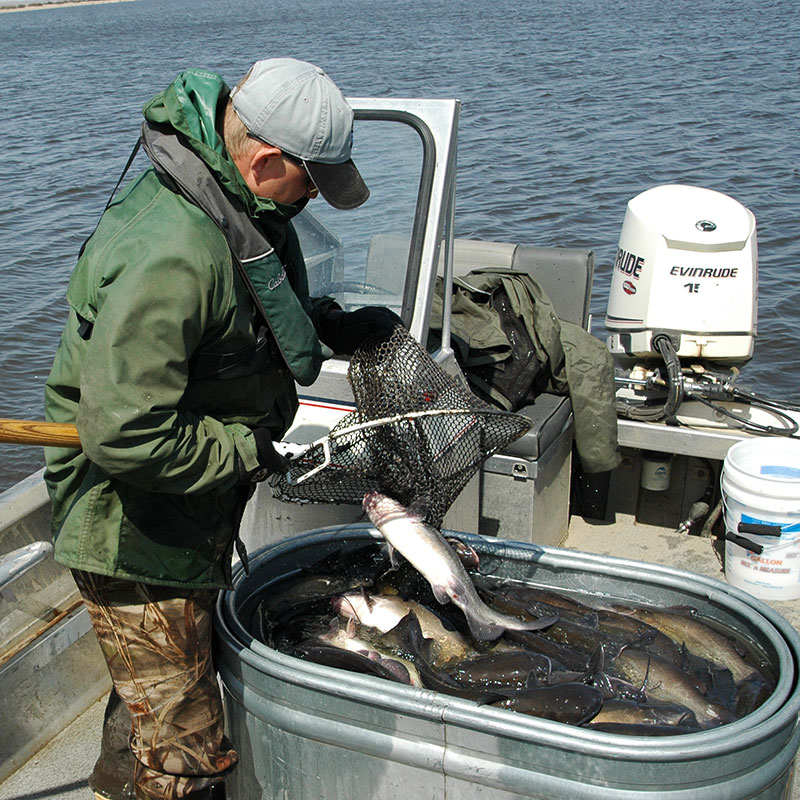 Game and Fish Department fisheries personnel work with channel catfish netted from the Missouri River System. These fish, and others, were stocked in waters around the state.

That is to say that North Dakota Game and Fish Department fisheries personnel often catch more channel catfish in netting surveys than any other fish species.

“They are the number one fish in netting surveys in those areas,” said Greg Power, Department fisheries chief. “At least that’s the case most years.”

Channel catfish are native to North Dakota. This unmistakable fish has a deeply forked tail, is grayish brown in color, and has four pair of whisker-like barbels near its mouth. Smaller fish often have black spots.

One of the things the channel catfish doesn’t have, and this fish species isn’t alone, is that it’s not called walleye.

“The channel catfish fishery is truly unexploited, especially in the Missouri River System,” Power said. “I make a point in public presentations to tell anglers that if North Dakota was located 500 miles south, most anglers would be tapping into this wonderful resource and likely spending much less time walleye fishing.”

It’s not Power’s intention to try and convert the state’s ardent walleye contingent, but rather remind them, and other anglers, of a resource that continues to get better, especially in the Missouri River System.

“The average North Dakota angler fishes 20 days per year, and of those 20, 19 are spent fishing for pike, perch or mainly walleye,” he said. “We’d just like to see anglers take a couple of those 20 days and try something different. Getting the news out on channel catfish opportunities in more than 40 waters across the state is a start.”

While channel catfish are down the list of go-to species for anglers, the fish have earned a certain amount of respect, Power said.

“We’re not seeing the same type of reaction when someone catches a carp, our top invasive species in the state,” he said. “You don’t see any wanton waste; catfish tossed on shore and left to rot.”

Channel catfish, by nature, prefer bigger, turbid waters, which is why fisheries biologists are so successful in netting fish in the Little Missouri arm of Lake Sakakawea. While Lake Oahe isn’t as turbid, it does fit the big water preference.

“The exception to turbid water, however, is the Garrison Dam Tailrace.

Oftentimes, there is a very good catfish bite,” Power said. “There are some anglers who target channel catfish in the Tailrace at those times. The lion’s share of the fish are about 2 pounds, great table fare coming from that cool water. The anglers targeting them sure seem to have a blast catching and keeping them.”

Power said it’s unknown why the fish move and stay in the Tailrace other than for an easy meal of rainbow smelt coming through the dam. And the formidable Garrison Dam itself is simply the end of the upstream road. 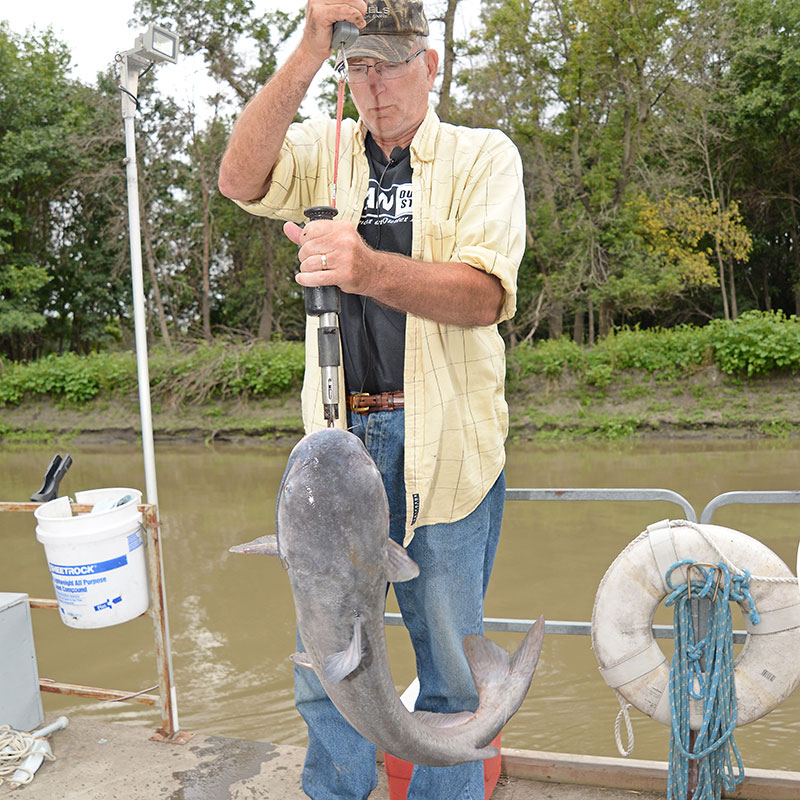 Catfish caught on the Red River.

They are certainly not there to spawn, as channel catfish need water temperatures to hit 75 to 80 degrees Fahrenheit to reproduce, which they find in the tributaries on Sakakawea like the Little Missouri River and the Cannonball River and Beaver Bay on Lake Oahe, for example.

You can’t write a channel catfish story without mentioning the Red River, which shoulders up against the Minnesota border in eastern North Dakota and uncharacteristically flows north.

“The Red River is truly a trophy channel catfish destination, especially farther downstream in the Drayton area,” Power said. “Anglers travel long distances to fish for these cats. And while the Red receives its share of fishing pressure, anglers practice a lot of catch-and-release.”

Power said the channel catfish are bigger farther downstream because studies show the bulk of the spawning and rearing, which would harbor more smaller fish in the overall population, takes place from Fargo to Wahpeton.

“Plus, considering catfish prefer a bigger water environment, your bigger cats will be downstream in that Drayton area,” he said.

While channel catfish have been thriving in the Missouri River System for decades, and have largely gone unnoticed, Department fisheries personnel have for years trapped and transported adult fish to smaller waters around the state.

“We’ve stocked thousands of adult catfish in smaller lakes and community fisheries where anglers have easy access,” Power said. “We’re giving anglers a chance to catch a fish that is still eager to bite when water temperatures heat up in summer.” 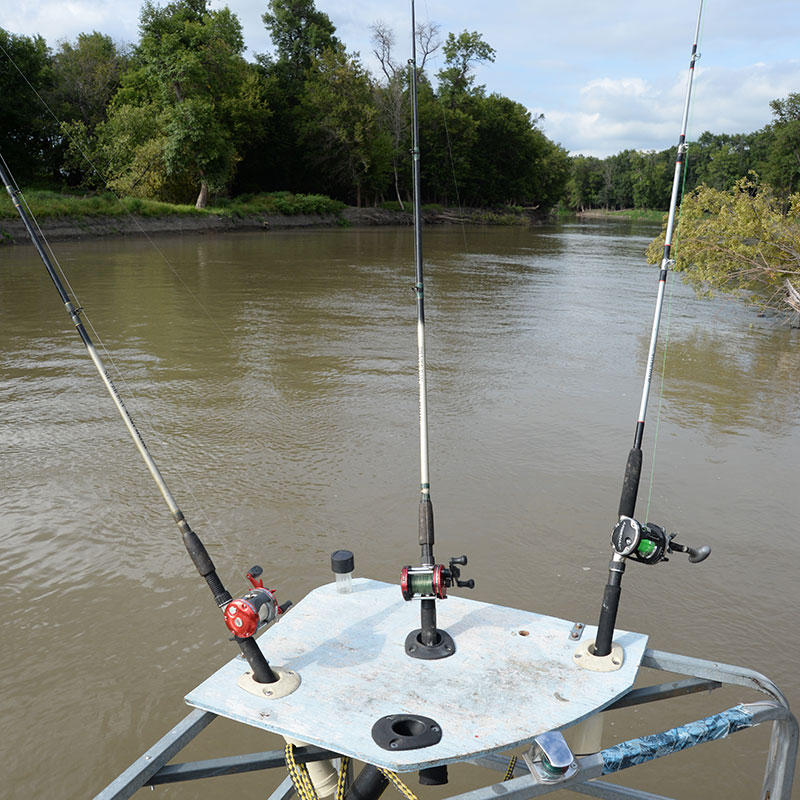 Fishing scene on the Red River in eastern North Dakota.

In the case of Moon Lake, some anglers may remember that on July 25, 2009, Tina Willis of West Fargo set the new state record with a 42-pound, 1-ounce channel catfish from this Barnes County fishery.

Her fish was the product of the Department’s trap and transport effort, not a product of natural reproduction.

In the case of Braddock Dam, and there are others like it, channel catfish were not simply stocked in the fishery to provide angler enjoyment, but to curb an unwanted bullhead population.

“When our fisheries personnel are trapping channel catfish in spring from Sakakawea or Oahe, they are hardly touching what’s out there,” Power said. “It’s a good use of a resource that is not being utilized, and we’re also bringing fish to the public by moving them into other waters around the state where they’re happily caught.”