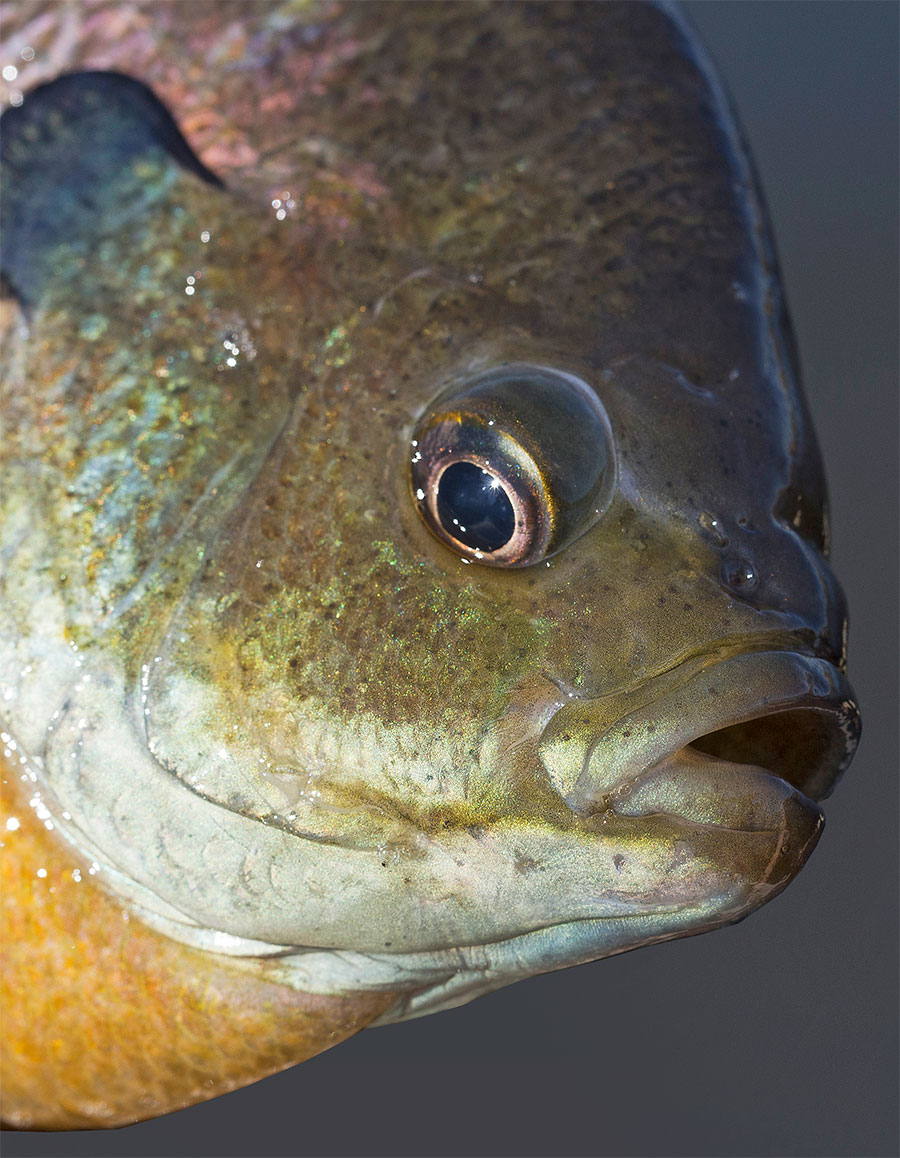 "Probably no fish gives as much pleasure to so many different kinds of anglers as the bluegill. Why? Well, bluegills being what they are, piscatorial billy goats willing to eat anything, any time...provide sport and food throughout this nation and Canada,” North Dakota OUTDOORS, July 1954.

In a walleye-mad state, where this is the fish of choice for 80-plus percent of the anglers, maybe news of the best bluegill fishing in decades doesn’t raise many eyebrows.

Then again, perhaps it should.

“I think it’s safe to say, in terms of quantity and quality, the bluegill fishing in parts of North Dakota hasn’t been this good in the last 30-plus years,” said Greg Power, North Dakota Game and Fish Department fisheries chief. “As fisheries managers, we always say there are other species out there. With the good bluegill fishing we have now, it’s nice to let anglers know there are other options.”

Some of that good bluegill fishing was negatively influenced by severe drought in the late 1980s and early 1990s.

“That’s the way it is in North Dakota, no matter the species,” Power said. “With low water levels and winterkill, the fish suffer.”

In the last 10 years, certainly, the bluegill fishing west of the Missouri River, in a few lakes in the Turtle Mountains and select waters elsewhere, has rebounded.

Contributing to the bluegill rally west of the Missouri was the reduction of rough fish, mostly white sucker, and green sunfish. Both species, Power said, at one time tied up much of the biomass and were direct competitors of bluegill. 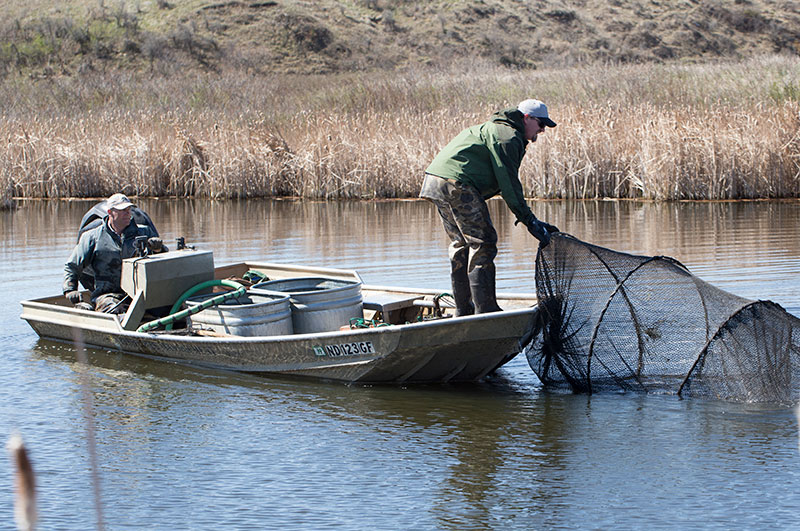 “If you go back to the days when we had limited water, one of the number one problems was white sucker biomass,” Power said. “Then we started white sucker eradication and removal projects, and got rid of them as a legal baitfish statewide (except the Red River), and those waters rebounded as quality bluegill and largemouth bass fisheries.”

Many of the waters where anglers find good bluegill fishing, they’ll also discover good largemouth bass fishing. In the fisheries management world, these two species fit well together, as bass are good at keeping bluegill populations, to some degree, in check.

“Largemouth bass are the best predator for bluegill because both species occupy the same habitat,” said Scott Gangl, Game and Fish Department fisheries management section leader. “What we’re looking for is ample numbers and good size of each species, but sometimes that is hard to achieve.”

Department fisheries biologists often trap and transport bluegill from North Dakota waters because, despite the predator-prey balance, the population of the latter is too robust. 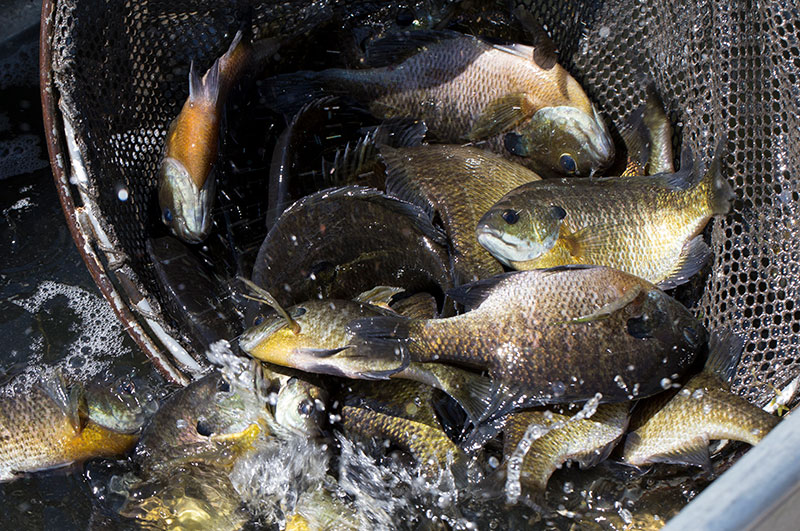 Bluegill taken from Sheep Creek in spring were transported and released in a handful of other North Dakota fisheries.

“Bluegill are notorious for stunting...if we see too many smaller fish, that means there are too many in there,” Gangl said.

An added benefit of thinning out the population is that biologists can take those fish that were trapped, and transport them to other lakes where they are needed.

In April, fisheries biologists netted hundreds of pounds of bluegill from Sheep Creek Dam, and released them in three or four other fisheries.

When trapping bluegill, Gangl said fisheries biologists set the trap nets and let them fish for two to three nights. If the nets are producing, then they might be checked every day.

“The natural reproduction of bluegill in Sheep Creek has been consistently good,” Gangl said. “It’s not our only source of bluegills, but one of the more consistent ones.”

The beauty of bluegill, a fish that Power calls a gateway species to get kids interested in fishing, is that they are angler friendly.

Understanding this, many of the fish trapped by Department fisheries crews are transported to community fisheries in many parts of the state where young anglers have easy access. 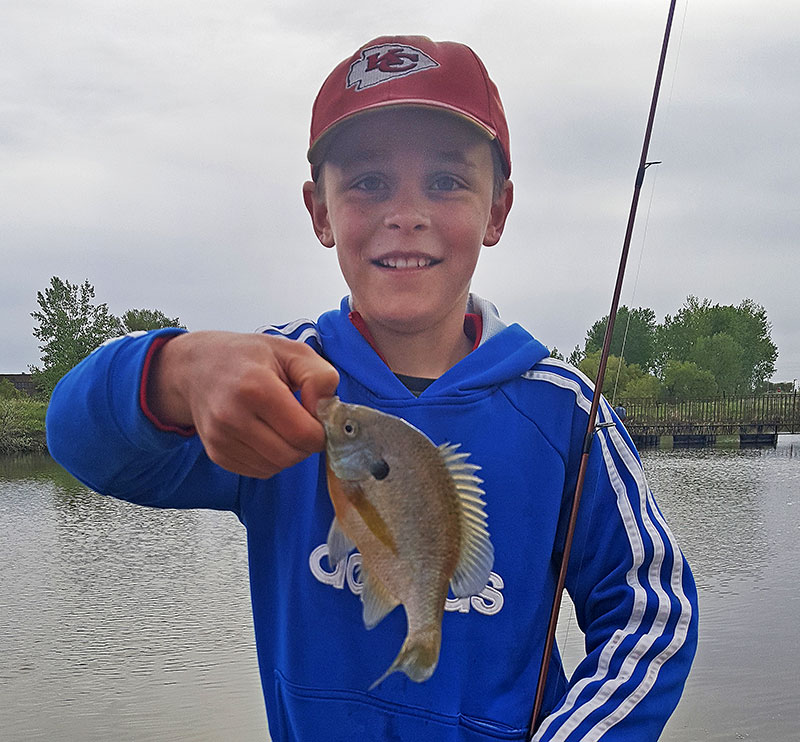 Fisheries managers say bluegill are a gateway species for kids because they are often easy to catch and lead to an interest in fishing. Miles Hosek, Bismarck, caught this bluegill in May from the OWLS Pond in Bismarck while fishing with his brothers.

“In a lake with bluegills, you pull up to the weeds, drop anchor, throw out bait and a bobber and start catching fish,” Gangl said. “You can also do this from shore or from one of our many fishing piers. Catching fish, and sometimes lots of fish, is where the appeal starts. Not only are they fun to catch, they are darn good to eat.”

Bluegill start catching the attention of older anglers when they hit about 9 inches, or maybe longer.

“Bluegill are like perch. They make the bobber move and are great for kids,” Power said. “But when bigger bluegill are involved, adult anglers start taking notice.”

In 2016, the top Whopper Club entrants for bluegill came from Long Lake and Lake Metigoshe, both in the Turtle Mountains, and Froelich Dam in Sioux County.

“There are people who like to fish for big bluegill and they’ll travel a long way to catch some nice fish to take home,” Gangl said.

Arguably the best time to fish for bluegill is during spawning, and the peak of this annual event is typically mid-June to the end of the month in North Dakota.

At that time, males are guarding eggs in nests about the size and shape of a Frisbee. If you find one nest, there are likely others nearby.

Why the bluegill spawning season so suits anglers is because the nests are located in shallower water and likely within casting distance from those on shore. Also, any bait pitched, jigged or retrieved near a nest is likely to get eaten by male bluegill defending eggs from what they perceive as predators. 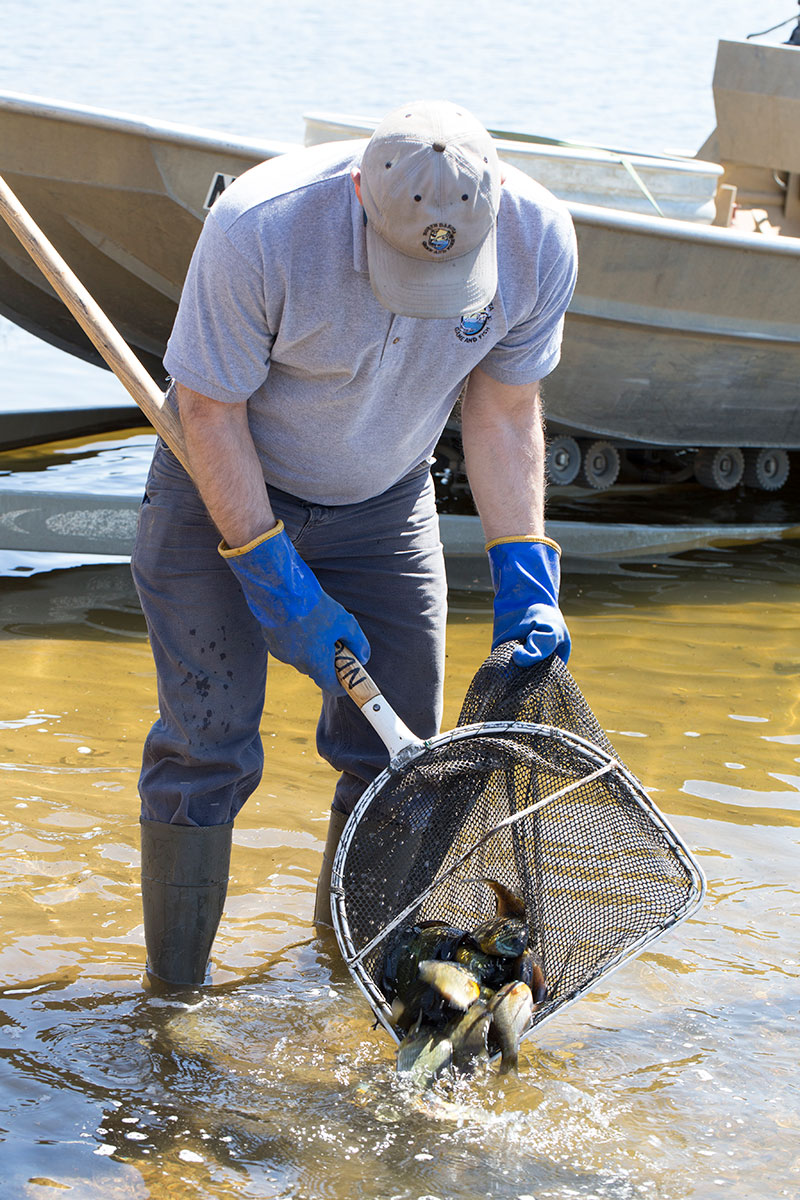