Of the 50 or so shorebird species that migrate through North America in spring, roughly 36 have ties to North Dakota. The link to this neck of the Northern Plains for the majority is brief, yet vital, as birds touch down to rest and refuel, before pointing their bills north and continuing on. 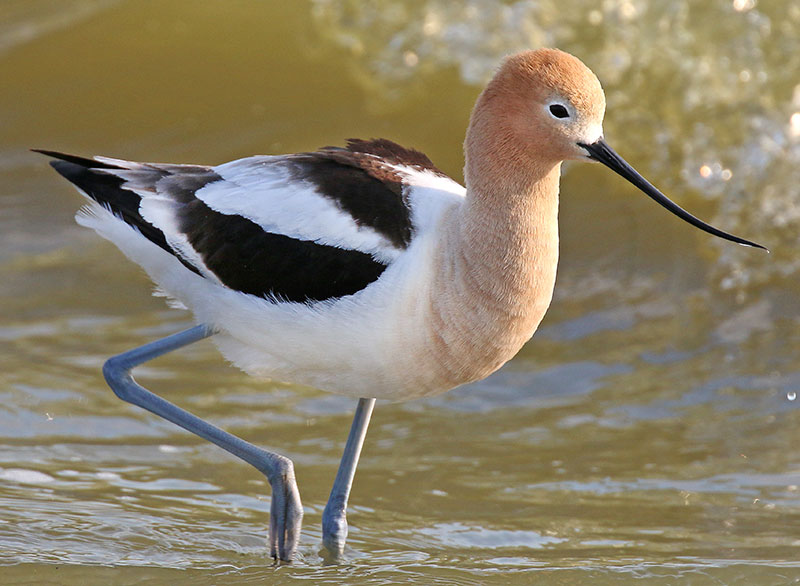 The long-legged American avocet, with its black, white and rust coloration, is one unmistakable shorebird that frequents North Dakota.

The story for these small- to medium-sized birds, with slender, probing bills and long legs, however, begins earlier, weeks before on wintering grounds in Central and South America, and stops in between.

To get to North Dakota, or farther north to Arctic breeding grounds, shorebirds must fly incredible distances. 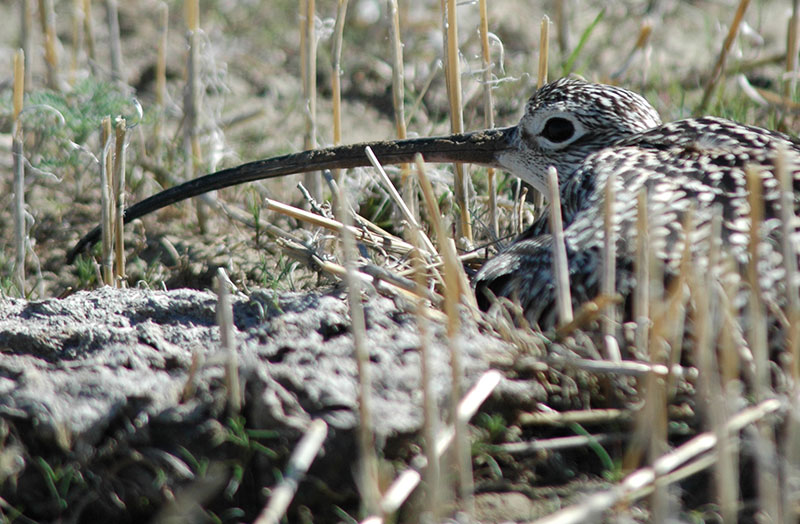 The long-billed curlew, identified by its long, sickle-shaped bill, is photographed in a grasslined nest in a stubble field in southwestern North Dakota.

Depending on the weather and other hurdles shorebirds encounter en route to North Dakota and beyond, most of the birds arrive here sometime in late April to late May.

It’s here, in a state riding a wet cycle for the better part of two decades, that the birds find what is so fundamental to their journey, to their survival.

“Because we are blessed with so many lakes, permanent wetlands, temporary wetlands, or simply shallow water pooled in farm fields, North Dakota plays an important role as stopover habitat, places for the birds to wade in the shallows, rest and feed during the migration,” Johnson said. “These waters are so full of invertebrates and other foods that the birds are able to gorge themselves before moving on.”

Because the Arctic nesting season is short, Johnson said it’s important the birds arrive there healthy and in breeding shape.

“If these shorebirds weren’t able to take advantage of the vital habitat that North Dakota provides during their migration, some simply wouldn’t make it or be able to breed,” she said. “North Dakota is just one little piece in the big habitat puzzle for these birds. Because they travel so far in spring to breeding grounds and in fall to wintering grounds, there are many key places they rely on twice a year.” 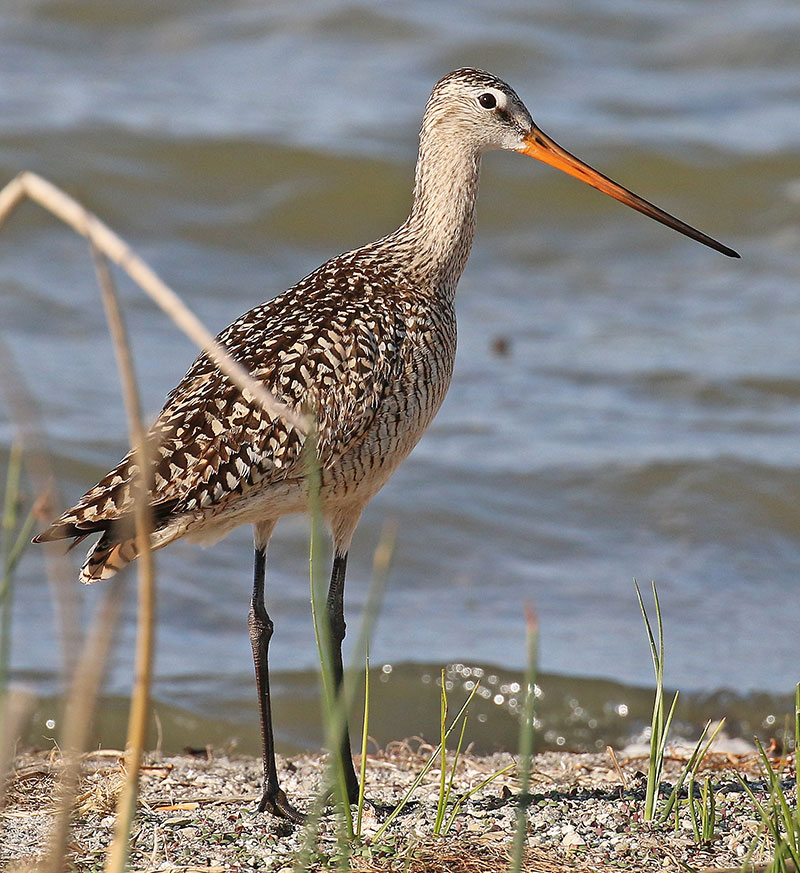 The marbled godwit is one of the largest shorebirds.

Understanding this, Johnson said other habitat components come into play.

“Some of the birds that nest in North Dakota, such as marbled godwits and willets, are looking for the same grassland habitat that many of our waterfowl species are seeking out,” she said. “With the continued loss of native prairie and other grasslands, this nesting habitat for all of these birds is harder to come by.”

Other shorebird species, such as upland sandpipers and long-billed curlews, seek out the more dry upland, grazed, short-grass habitat.

“The ranchlands in North Dakota are important nesting sites for these species,” Johnson said.

Of all the itinerant shorebird species with another destination in mind, or the birds that nest in North Dakota, to Johnson, one bird signals that it’s spring in shorebird country. 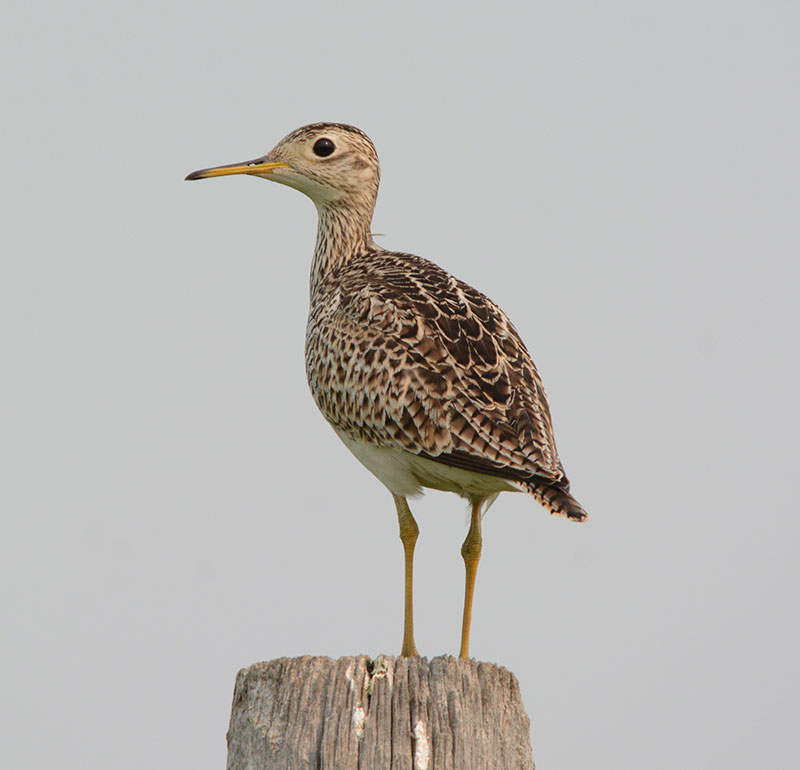 “When I first hear the upland sandpiper and its distinctive ‘wolf whistle’ call, I know that the prairie is coming alive,” she said.

Biologists describe the upland sandpiper as dove-sized, with a long neck and tail, small head, short bill and long yellow legs. The sandpiper’s plumage is straw-colored, with dark streaks and a white belly.

To passersby, we know when we see one, as upland sandpipers are often found perched atop wooden fence posts, or other elevated locations, surveying their surroundings.

When shorebirds arrive in spring, they are typically dressed in their finest plumage to woo suitable mates. Like many birds in nature, it’s the mature males that are the best dressed for the occasion, as it is their role to attract a mate and initiate courtship.

Then again, there are exceptions in nature, even in the shorebird’s world.

The Wilson’s phalarope is one bird for which the roles are reversed. For one, female phalaropes are bigger than the males. The females are also brightly colored, with a brownish-red and gray back and a striking black streak running from the eyes down to a light cinnamon neck. A snowy white throat and belly accent the colorful getup.

This role reversal continues into courtship as females are the aggressors, defending males from other potential suitors.

The females lay the eggs, of course, but it’s in a nest built by the males. The latter also take care of the incubation duties and raise young after hatching. 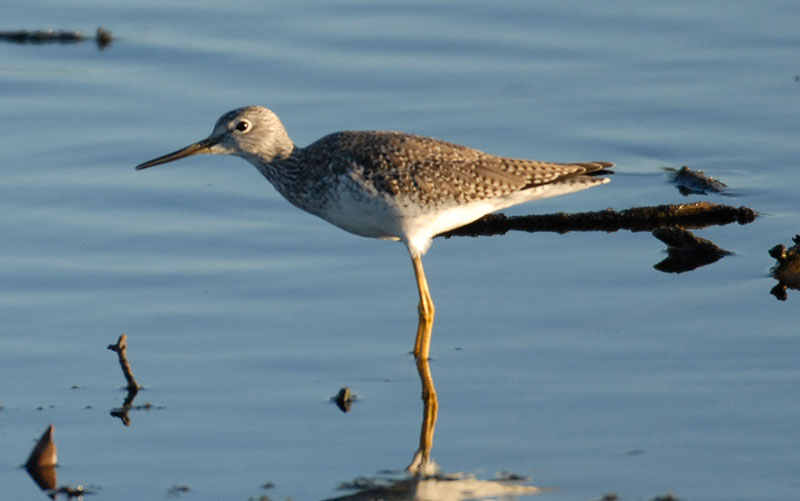 The lesser yellowlegs bobs its head up and down when approached by intruders.

“Whether it’s Wilson’s phalaropes, American avocets or ruddy turnstones, spring in North Dakota is the best time to get out and look for shorebirds because they are a lot easier to identify,” Johnson said. “When the birds turn and migrate back through in fall, their breeding plumage, for the most part, is gone.”

Thirty-six shorebird species, give or take, make an appearance in North Dakota during spring and fall migrations. Some of those birds even nest here.

What follows is a roll call of those birds with North Dakota connections. They are listed by the distance (short, intermediate and long) of their migration. 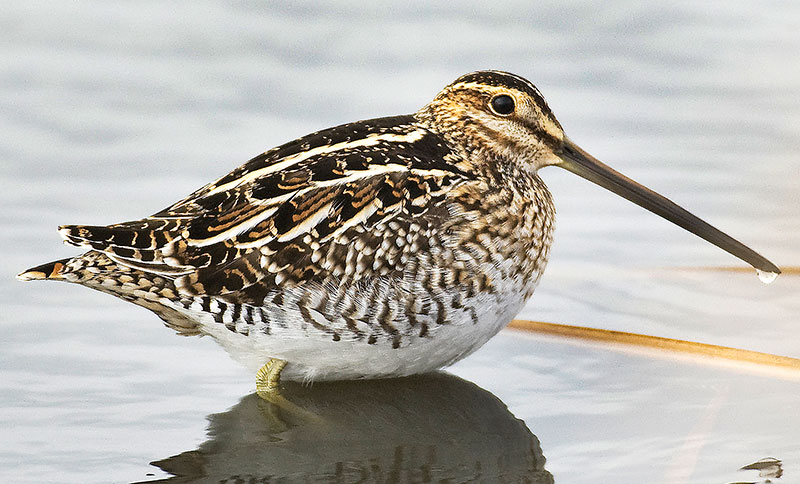 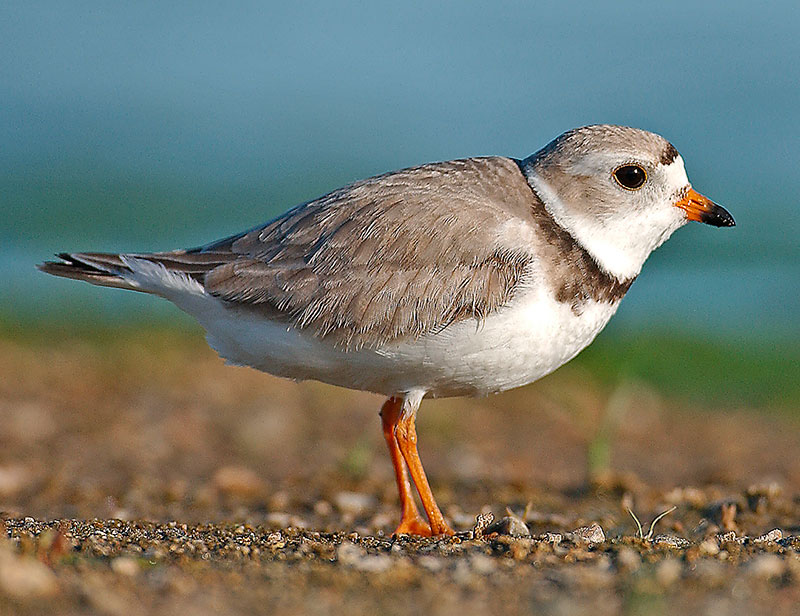 The piping plover is a threatened species.

North Dakota has 115 wildlife species the state Game and Fish Department has identified as species of conservation priority.

These animals, and a few insects, made the list, in short, because of declining status in North Dakota or across their range due to habitat loss or other influences.

Of the 115 wildlife species, eight are shorebirds, seven of which nest in North Dakota. The rufa red knot nests in the Arctic.

The shorebird species are as follows: