Efforts to bolster a fading sage grouse population in southwestern North Dakota continued in 2018, but with a twist.

This spring, 39 sage grouse, with a near equal divide in sexes, were captured in Wyoming, fitted with tracking devices, and released south of Marmarth.

Here’s the twist. Twenty additional sage grouse hens were captured in Wyoming and released back into the population, with the aim of recapturing and translocating the adults and their young to North Dakota after successful nesting.

“A lot of those nests in Wyoming began to fail...it wasn’t looking good,” said Jesse Kolar, Department upland game management supervisor in Dickinson. “We were hoping to get up to eight broods translocated.”

Efforts to move, electronically track and study sage grouse is a big undertaking and requires many hands. Players in North Dakota’s attempt to improve the grouse population in the southwestern part of the state include Game and Fish, Wyoming Game and Fish Department, Utah State University and the U.S. Geological Survey.

In the end, Kolar said, six hens and their broods (21 chicks) were moved to North Dakota, placed in a release pen and later liberated.

Biologists have long said that sage grouse in southwestern North Dakota are on the eastern edge of their range, where habitat and weather limit their success and expansion. 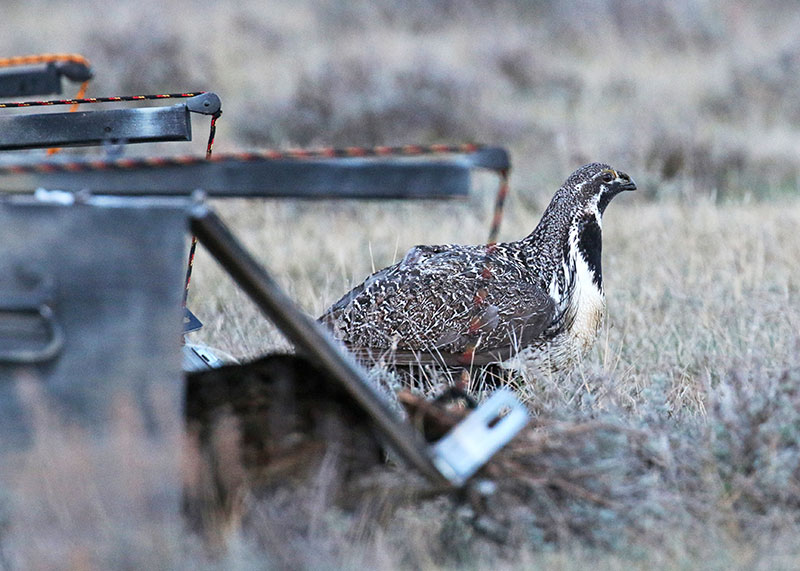 There are other difficulties, too, a lack of luck included, in an adult hen raising a successful brood. This goes for birds ushered in from Wyoming or hatched and reared in North Dakota.

“Unfortunately, the first brood we brought up from Wyoming, we found several of those chicks in a really small burrow, which we assumed was weasel predation,” Kolar said.

Another brood was found dead, with zero signs pointing to predation.

“During that time, we had a lot of spring moisture, including some hail, so we’re assuming the cause of mortality was exposure,” Kolar said.

By late August, Kolar said four of the 21 chicks and four of the six adult hens were still alive in southwestern North Dakota.

Kolar said biologists consider a brood successful if they reach 50 days after hatching.

“For me as a biologist, as a manager, I am more interested if they make it until next summer and the females initiate a nest,” he said.

Of the 39 adult sage grouse translocated before the hens and broods, Kolar said 28 of those birds were alive in late August.

Kolar said the reasoning behind the brood translocations was to see if this method increased recruitment, reduced movements and fostered site fidelity in the new population. While the sample size is small, he said the results so far are encouraging as the adult hens and young are sticking around the areas at which they were released.

Biologists also continue to electronically track the whereabouts of those adult grouse that were released in Bowman County in 2017. In late August, fewer than half were still on air. Yet, four of the adult hens in that group did initiate nests in spring.

“We weren’t happy seeing many of those birds take off after being released in southwestern North Dakota in 2017, but where they ended up settling down wasn’t as far away as we initially perceived,” Kolar said. “A lot of them settled a few miles into Montana and some into South Dakota, which is still part of our regional sage grouse population. Those birds that have been around a while are seemingly becoming a little more adapted to this habitat and are finding ways to survive.”

North Dakota had its first sage grouse season in 1964. The season, which was typically a three-day hunt most of those years, was shut down indefinitely in 2008. The population today is nowhere near where it needs to be to open it up to hunting, and it’s uncertain if sage grouse numbers will ever reach huntable numbers in southwestern North Dakota.

“I try to be optimistic about it … Sage grouse are upland birds and upland birds can have boom years when the conditions are right,” Kolar said. “But today, I would say that the prospect of reopening the season soon doesn’t look good.”

Even so, Kolar said the Game and Fish Department has the responsibility to manage North Dakota’s wildlife and sometimes that includes trying to maintain struggling populations.

“Our job now is to see what works, what is possible in helping the sage grouse population,” he said. “We need to be able to say that we made really good efforts to try and identify what works, what doesn’t work and pass that information along to other states working with these birds.”