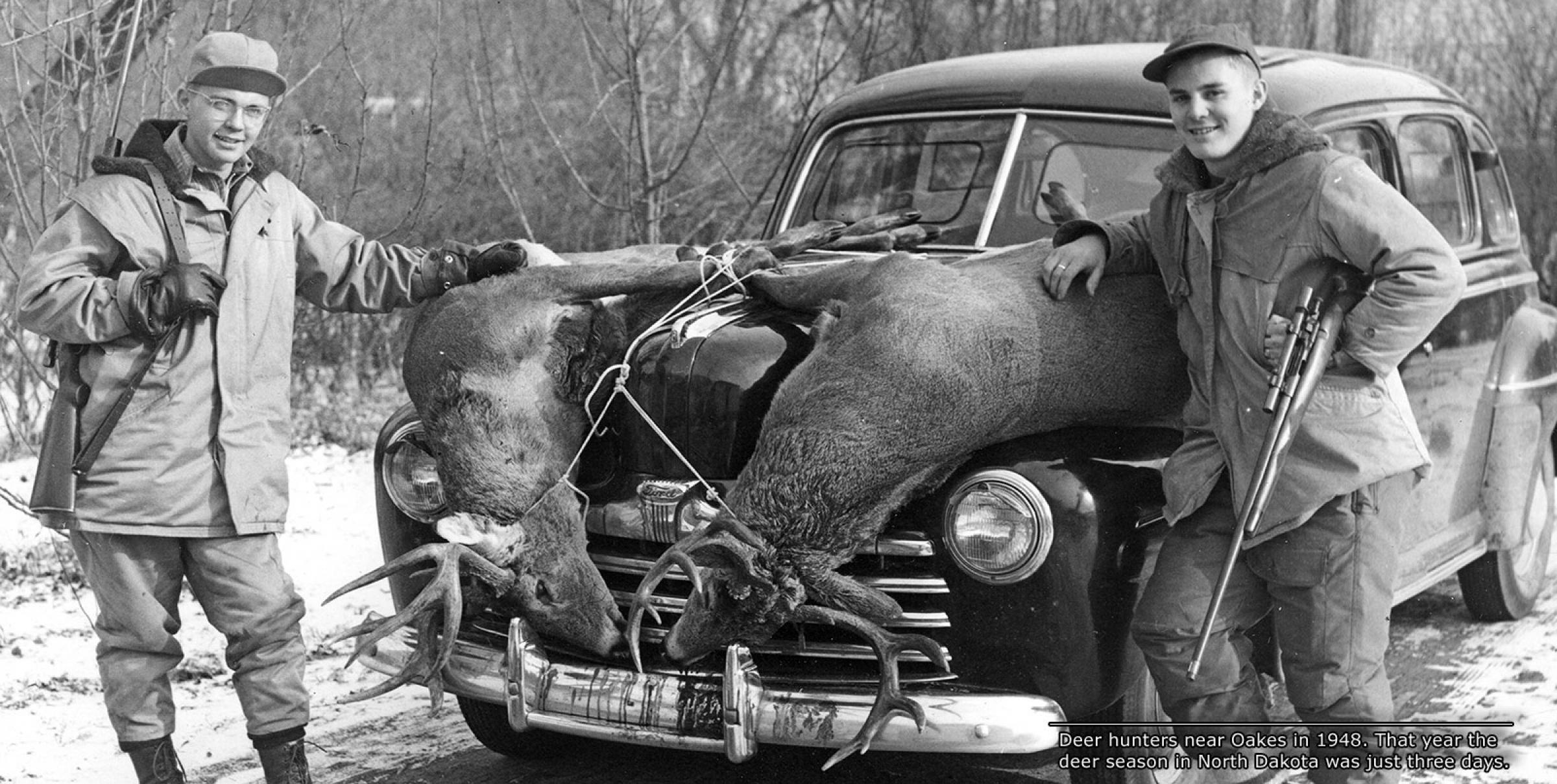 Game and Fish Department officials have long held that was the year of the state’s first official deer season because a specific deer license was required. That was also the year the first issue of North Dakota OUTDOORS was published.

Eighty-seven years later, both are, in many ways, unrecognizable.

If you randomly thumb through OUTDOORS from, say, the early 1930s to sometime in the 1970s, you’ll see, for instance: 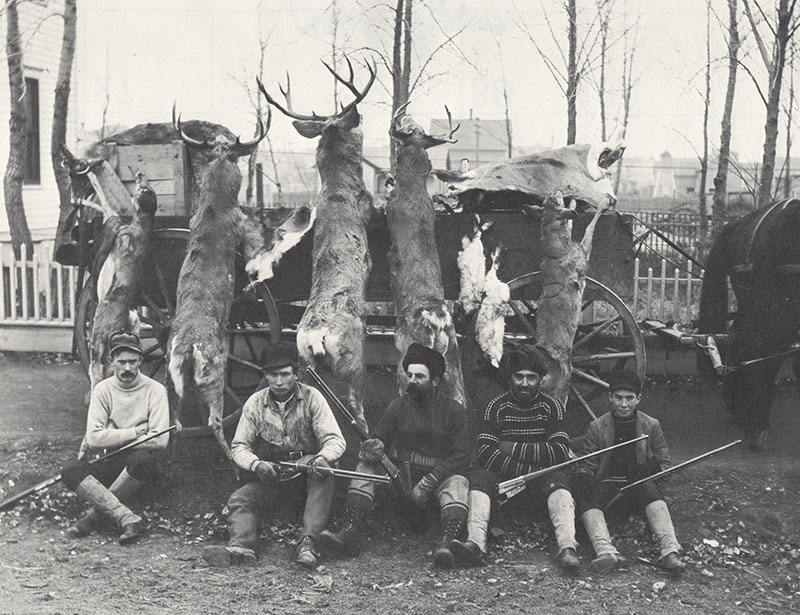 There was a time in North Dakota, certainly, when hunting and harvesting deer meant survival, meat for the table. This photo of five hunters was taken in 1902.

What seemingly remains the same, has endured nearly nine decades, is not season structure and what hunters must wear, but that the deer season remains a pretty big deal to a lot of people in North Dakota.

What follows is an unsystematic look at the deer season over time, from the pages of North Dakota OUTDOORS. 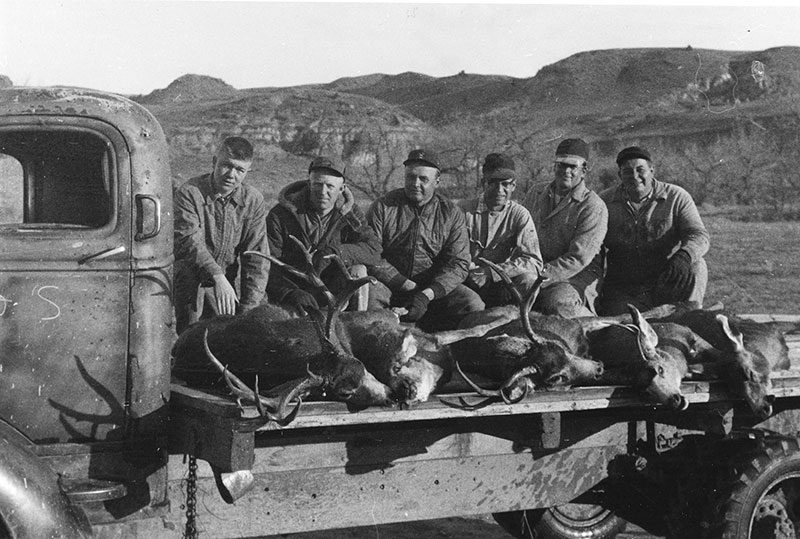 An undated, but successful mule deer hunt in the badlands in western North Dakota.

In 1931 some two thousand big game licenses were sold to deer hunters and it is a conservative statement to estimate the number of deer killed at one thousand as based on the report cards received by this Department. There is no evidence that the number of deer in North Dakota were seriously menaced by the open season of last year, but it is questionable if an open season two years in succession would be justified. Acting on this assumption the game and fish commissioner recommended to the governor the closing of the season for 1932.

There was no thought of who would get one next, but everyone just hoped that someone would get a deer. We combed the brush until 5 o’clock without another scare, but a couple of our boys did fire their rifles, but no deer.

After another of those well-earned suppers, we were all gathered in our cabin for one of those evenings that only deer hunters can fully understand and appreciate … Desperately we went at our task the fourth and closing day of the 1937 season. The morning was a strenuous one of walk, walk, walk. By now I could barely drag my feet through the snow. I never suffered more than I did this morning. After a summer spent in an office, this hunting trip was now becoming an abuse to my tender body … At 3 p.m. I got the best news of the whole trip; my hunting partner Jim brought down a beautiful doe. 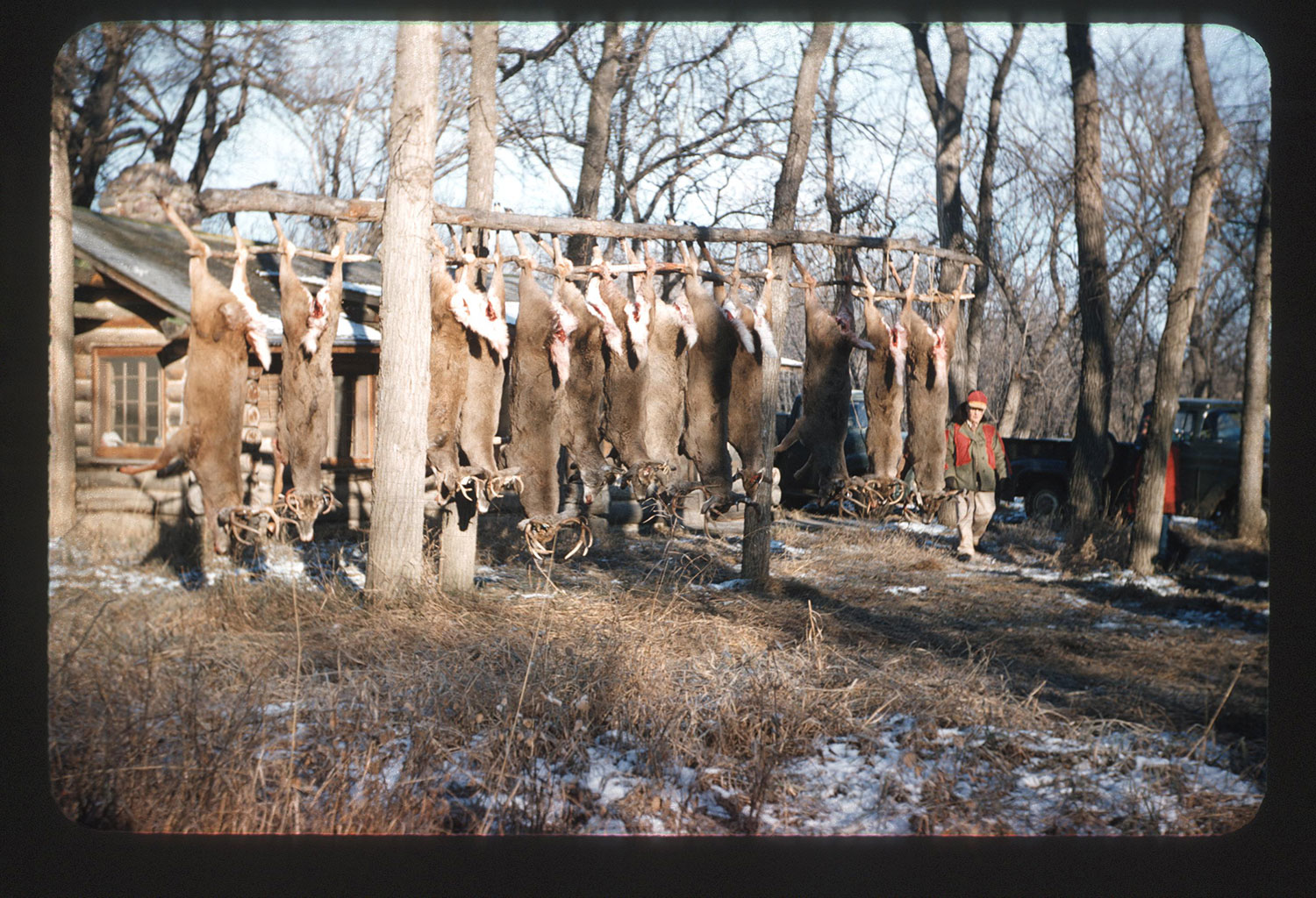 The success of less than two days of hunting – 16 hunters and 13 bucks – along the Missouri River bottoms north of Mandan in 1939.

The motto of the Junior Game Warden is true sportsmanship protects, and this might well be adopted by all who go into the fields and woods this year. Be courteous in your dealings with landowners and fellow hunters, let safety be the watchword.

Mary Gets Her Buck

Mary Buchler is a high school student at Buchanan. She and her mother make their home with the Wm. Lees family. Mr. Lees spurned hunting for deer around Buchanan and went to the Turtle Mountains for his deer, which he was successful in obtaining. While he was preparing for his hunt, Mary made the remark, “If you will buy me a license and provide me with a big game rifle, I will get you a buck.” The gun and license were secured and Mary proceeded to get her buck, which surpassed the one Mr. Lees brought home from the Turtle Mountains by three prongs and 70 pounds in weight. (Mary played hooky from school to bag her trophy.) 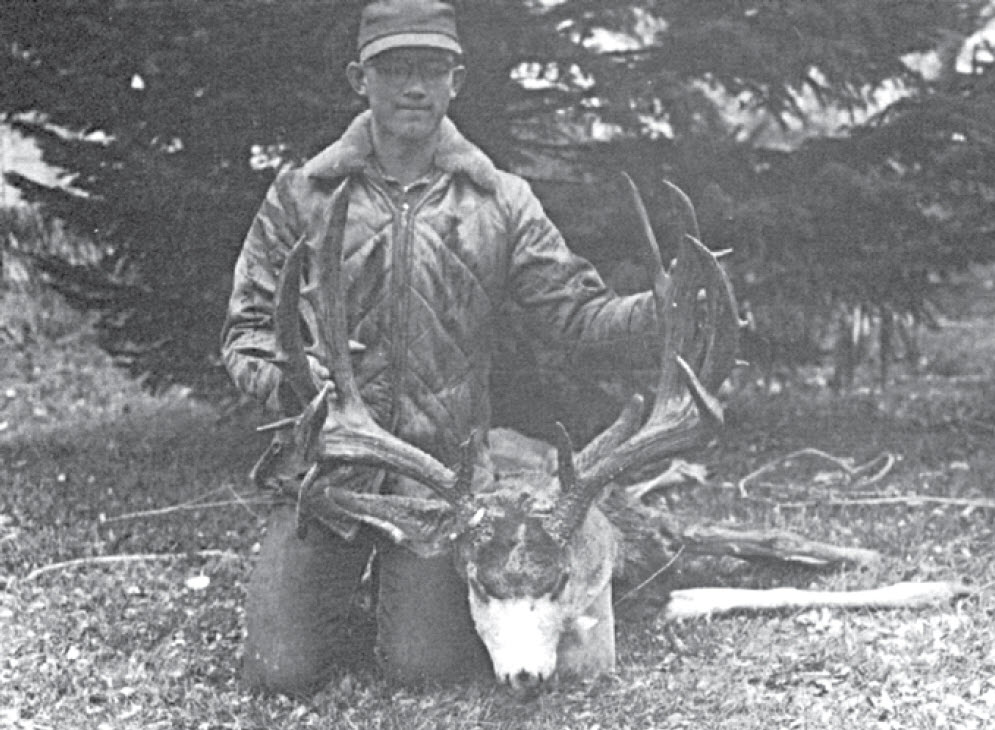 Con Short, just a teenager at the time, shot this big nontypical mule deer buck on the Short Ranch in Billings County in 1953.

How to Dress a Deer Hunter

If hunters intend to carry their shells in their pockets, they should wear suspenders as they hold the trousers up much better than belts.

It is unlikely that the state will ever have a large deer herd such as exists in many other states, but we can carry a reasonable number provided the surplus is harvested through sport hunting in somewhat the same manner as occurred in the past. The entire deer herd of North Dakota probably does not exceed 10,000 animals. 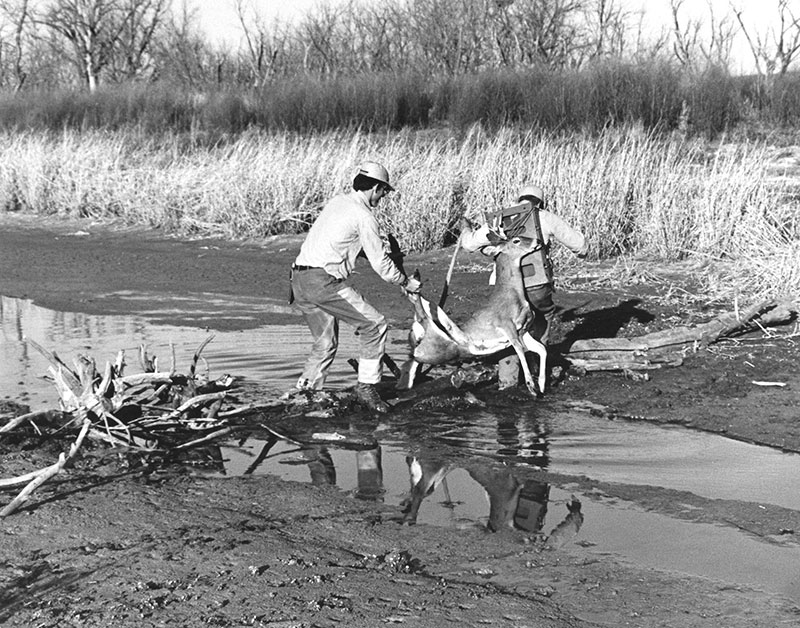 Although the greatest success percentage went to the driving technique of deer hunting, still-hunters with enough patience got their deer. One of the most patient was a youngster of about 70 summers who sat on the railroad trestle, waiting for deer to run under him. When others pointed out that his chances were pretty slim, the old boy just answered, “I got my deer here every open season … I think I will this year also.”

Screened by the driving snow, three canny old bucks decided to head for the safety of the open hills. Their path lay under the trestle. The old boy sized them up, passed up the big antlered buck that led the parade, drew a bead on the younger and fatter buck in the middle. His twelve gauge roared, and patience was rewarded.

I had been a North Dakota duck hunter and upland game hunter for some 20 years. All I knew about deer hunting was what the magazines and my deer hunting friends had told me. The successful hunters related how they had been out a few hours and then came home with a nice trophy and a lot of meat for the table. It sounded real good. 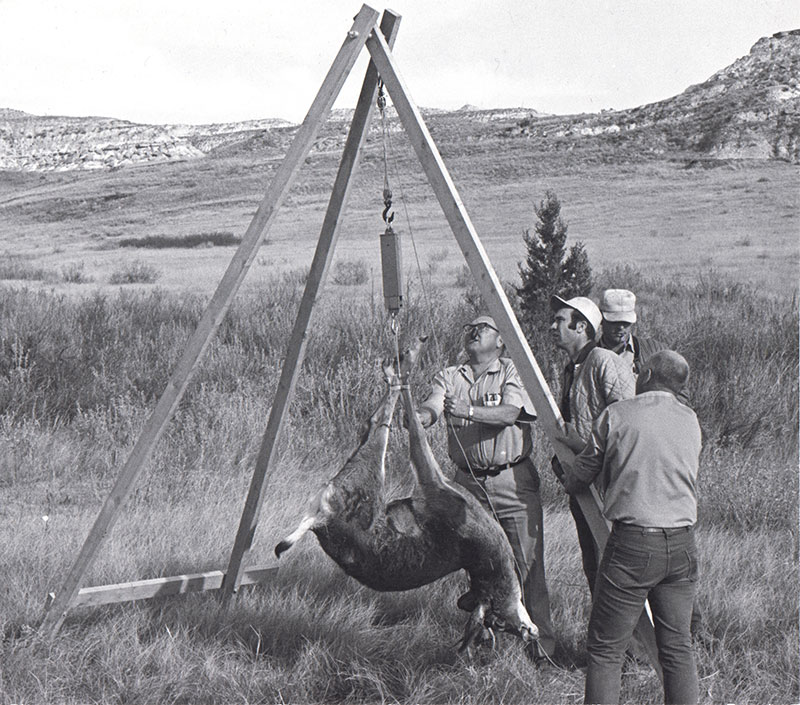 Game and Fish Department biologists weigh a buck shot sometime in the 1960s in western North Dakota. Deer were weighed, and other measurements were taken, to gather biological information on deer harvested by hunters.

I located a nice cozy spot in the woods along the river about 30 miles south of Valley City and decided to do my waiting there until I might spot a deer. I was well dressed in red, had a big lunch and some good sports magazines, as well as the Sunday paper. I parked myself on my pillow with my back to a large tree, feeling more safe in that position. Some five hours later, after reading many interesting stories and most of the Sunday paper, as I looked up to give my eyes a rest I was startled to see a large buck deer standing in an opening along a fence line about 50 yards straight ahead of me. The shot probably shook the tree behind me, but the buck left in a hurry and I didn’t get another shot … He was so close and the shot looked so easy that I figured all I would have to do is to shoot him and walk over and put the tag on his large antlers. I spent the next couple of hours looking over the spot to try to find out why I had missed. 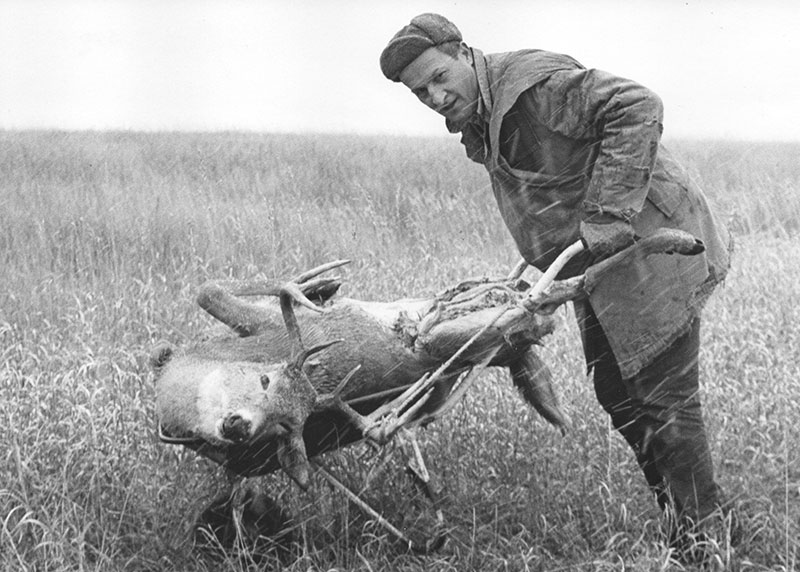 Ed Bry, editor of North Dakota OUTDOORS for 24 years, transports a whitetail buck in a wheelbarrow back to his vehicle.

The Two That Got Away

Later that day a huge buck escaped me through the trees without a shot fired at it. The next morning another big buck crashed out of tall cattails almost at my feet – about all I could do was trail it to another cattail swamp, and then again to a willow thicket where I got a quick glimpse of it. Why I suddenly shot a rather puny buck that came to me while I was still trailing the big one is hard to explain, except, over the years I’ve always had a policy in my mind to take the first legal deer I have a good chance at. Trophies are fine, but I believe deer other than trophy animals must be taken. Anyway, I remember the two that got away without a shot fired as well or better than the one I felled with a shot through the heart.