Chinook salmon were stocked in Lake Sakakawea in 1976, less than a decade after the reservoir filled, to inhabit the deep coldwater environment not used by other fish species. This nonnative species, like other fish in the Missouri River System, has ridden the ups and downs of low- and high-water years, times of abundant forage and times when prey was tougher to come by.

It hardly seems that back-to-back years are nearly the same. The same goes for fishing for salmon in the state’s biggest reservoir.

Q: We’re getting some feedback from people reporting that salmon fishing hasn’t been very good this year, though Game and Fish says the population is in good shape. What’s going on? Is it related to the high-water level or fish spreading out since there is more area of deeper water?

A: Looking back a year or two, salmon fishing in 2017 was pretty good. Game and Fish Department fisheries biologists also worked one of the strongest spawning runs and successful egg collection efforts ever. Using the annual Great Planers Trout and Salmon Club derby as one metric in 2017, the winning weight was the 9th largest in 29 years of the derby. Fishing was also good in 2016, with every team in the derby catching fish and the winning weight was the largest in the history of the derby.

The high water and abundant coldwater habitat in 2018 have certainly affected salmon fishing, especially in the downrigger bite during the summer in the lower portions of the reservoir. Salmon concentrate in the lower reservoir for one of two reasons. Like all salmon populations, sexually mature salmon in Lake Sakakawea instinctively migrate to the area of their natal origin to spawn. Salmon stocked in Sakakawea are raised in Garrison Dam National Fish Hatchery in water that comes from the Garrison Dam powerhouse. They “imprint” to the chemical signals in water from that area and return to the area to spawn.

The second reason salmon congregate in the lower reservoir is due to the decreasing amount of coldwater habitat as summer progresses. At high lake levels, coldwater habitat is abundant throughout a large portion of the reservoir and fish are not forced by thermal and oxygen constraints to the area where most of the angling effort occurs. In years of low lake levels and limited coldwater habitat, both the sexually mature and immature salmon are forced into the lower reservoir early in the summer, becoming much more concentrated and vulnerable to anglers.

In 2011, which had similar lake elevations to this year, summer salmon fishing was poor for downrigger fishing, but decent later in the fall for long line and shore anglers. Additionally, spawning efforts that fall documented an abundance of salmon in the run. 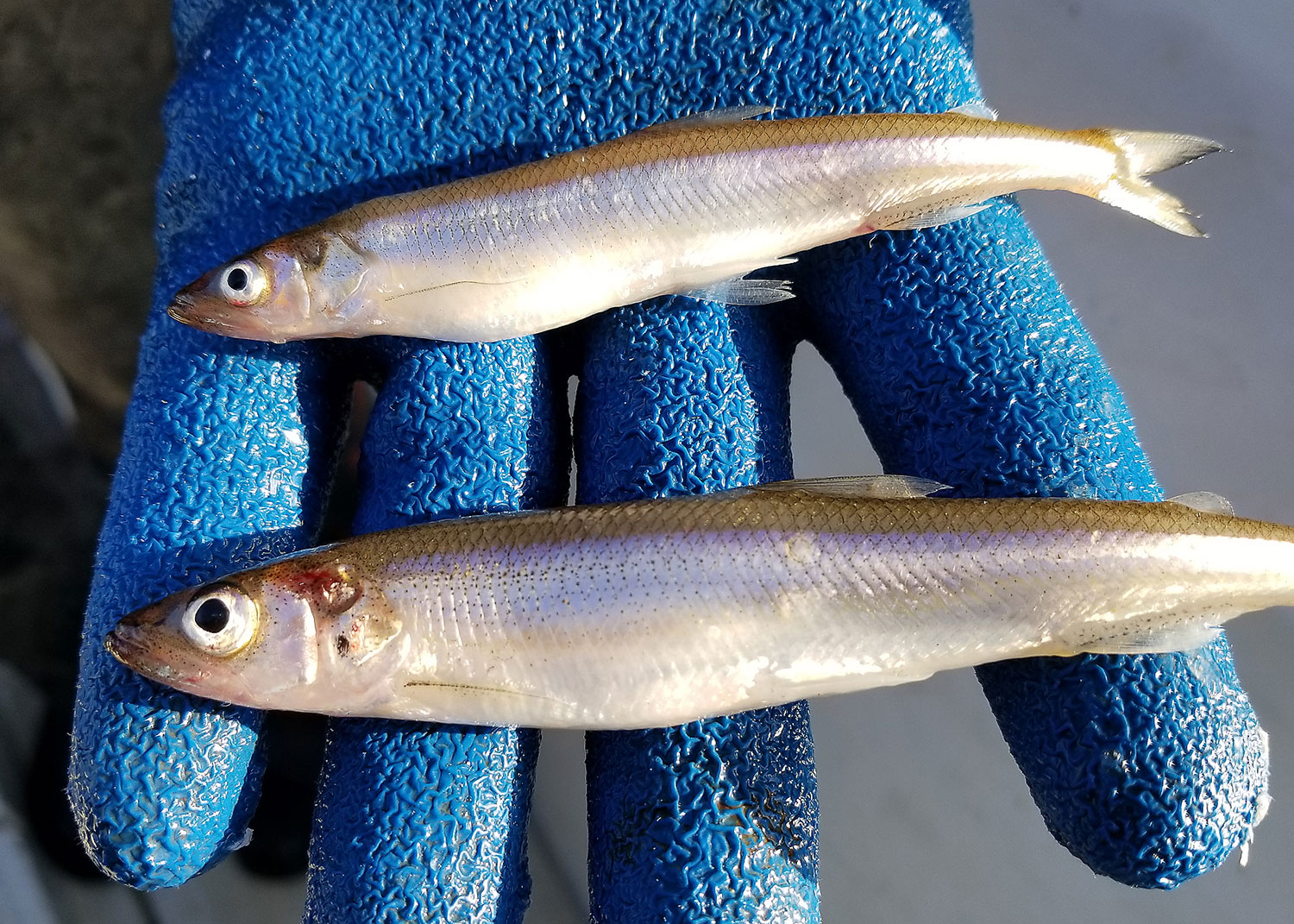 Smelt (bottom) are the dominant coldwater forage in Sakakawea.

Q: Are there so many rainbow smelt in the lake that the fish just aren’t biting?

A: That is certainly another factor playing into catchability. With abundant smelt and high lake levels, there is no reason salmon must be near the dam prior to spawning season. During the Department’s just-completed hydroacoustic survey in late August, smelt were abundant throughout the lower 80 miles of the reservoir.

Q: Is Game and Fish overestimating the salmon population in the lake?

A: Department fisheries biologists don’t estimate the size of the salmon population. Instead, they make predictions based on prior years stocking numbers, forage abundance, habitat conditions and the number of jacks (mature age-1 male salmon) in the previous fall spawning run. These factors provide insight into what “should” be out there for salmon. However, biologists have no way of indexing accurately until the fall spawning run. In 2017, the spawning run was very strong with lots of jacks, and with favorable habitat and forage there “should” be a good population in the 2018 spawning run.

Q: Why doesn’t Game and Fish stock more salmon? What all goes into deciding how many salmon get stocked?

A: The stocking decisions are based on forage and habitat conditions, as well as hatchery production capabilities. In recent years, we’ve stocked the maximum number of large-sized salmon smolts the hatchery can produce. The total coldwater production (salmon, rainbow and brown trout) have been maxing out the hatchery capabilities.

We could stock more salmon by either reducing production of trout for other statewide needs, or by drastically reducing the size of stocked salmon, and likely further complicating survival through increased predation. Predation can have a major impact on stocked salmon survival, with predators ranging from goldeye to walleye also thriving during high water periods. We learned over the years that raising smolts to a larger size equates to better survival and have concentrated on stocking fish big enough to avoid predation. Stocking more salmon would require stocking smaller salmon, and many of those would be eaten by predators in short order.

Growth of salmon can be density-dependent, meaning the more you stock, the smaller they will be on average. Salmon size had been smaller in recent years, and that’s another factor taken into consideration when we determine how many to stock.

Q: Can’t Game and Fish get other areas of the lake to hold fishable salmon populations?

A: Past stocking experiments at other locations up-reservoir have proven the salmon still return to the dam during the spawning run when they become sexually mature. Salmon evolved to swim thousands of miles throughout their life cycle. Lake Sakakawea is a small water body compared to the oceans in which the salmon evolved. They are highly mobile and moving 50-100 miles is nothing to a salmon. They are going to reside where they find the most favorable habitat and forage conditions.

Q: There are so few bigger salmon. Does Game and Fish need to look elsewhere for better genetics?

A: This is a question we’ve gotten quite a bit over the years, particularly when anglers see the larger salmon being caught at Ft. Peck in Montana and Lake Oahe in South Dakota. Interestingly, for most of the last decade a large portion of salmon stocked in Lake Oahe and Ft. Peck originated from eggs collected in Lake Sakakawea. Salmon tend to get larger in those reservoirs due to their diet, but they are the same fish genetically. 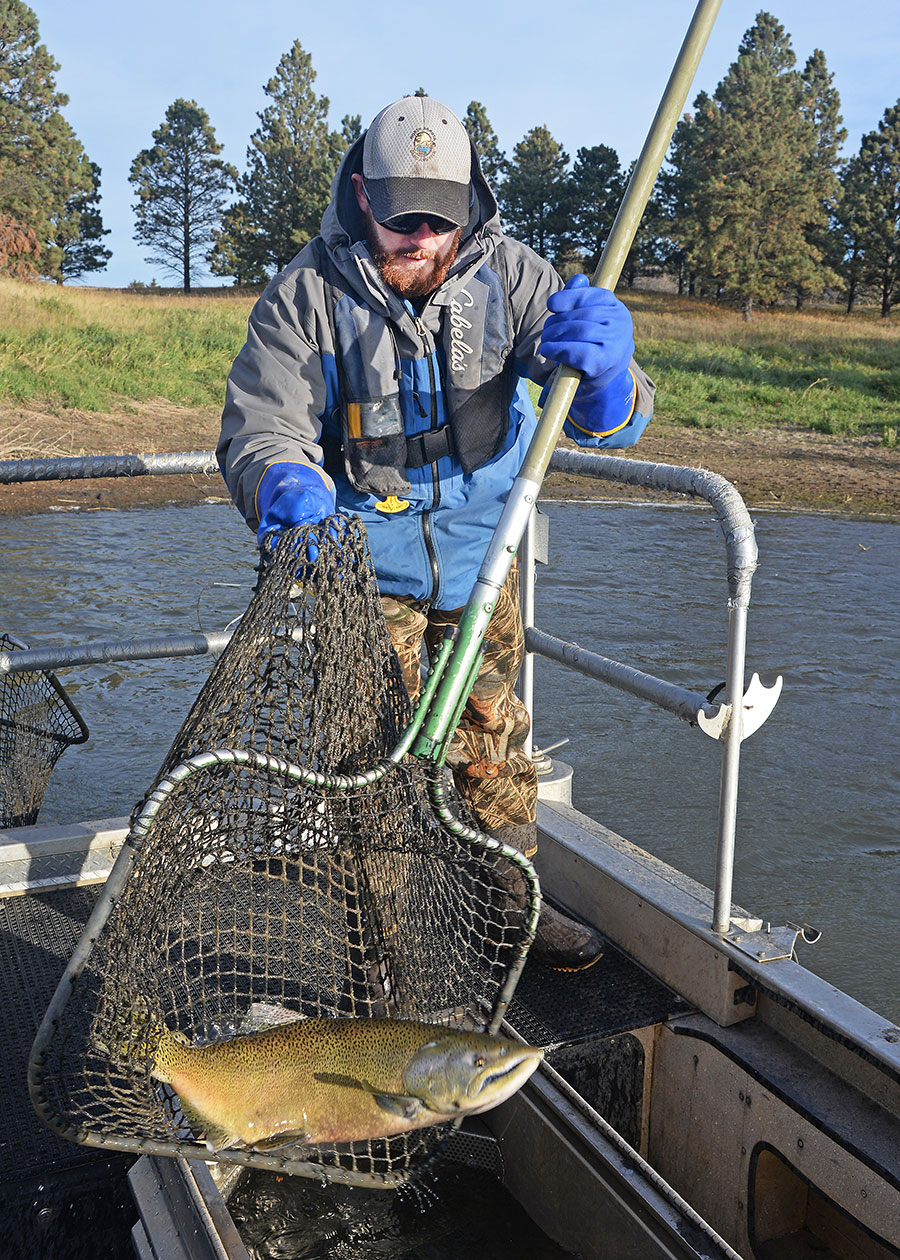 Game and Fish Department fisheries personnel (top) electro-fish a back bay in Lake Sakakawea for adult salmon. The fish are taken to the nearby hatchery where biologists collect eggs and milt.

Q: Does what salmon eat dictate how big they get?

A: Salmon get larger in Ft. Peck and Oahe largely due to their coldwater forage dominated by cisco instead of rainbow smelt. Cisco are larger, and salmon can more efficiently forage this species.

Q: Why doesn’t Game and Fish try stocking more forage species so that the salmon can grow larger?

A: Cisco (perhaps millions) are already present in Sakakawea and are part of the reservoir’s diverse forage base. However, smelt are the dominant coldwater forage and drive all aspects of the fishery. Smelt suppress cisco when both coexist, and with high smelt abundance we are seeing very low numbers of young-of-the-year cisco in recent years. When smelt abundance was very low in Sakakawea in the mid-2000s, some increases were seen in cisco abundance.

Q: Are all these fish being caught today younger salmon? Did something happen to the older year-classes?

Q: Why not try a different species of salmon like Atlantic salmon?

A: South Dakota tried to experiment with Atlantic salmon, but found that there was no reliable source of eggs. Their experimental stocking was based on the idea that Atlantic salmon would utilize warmer water and different forage. On Oahe there was abundant warmwater forage (gizzard shad) during low water and poor smelt abundance. However, on Sakakawea when smelt abundance was low due to drought, so was warmwater forage and the last thing biologists wanted was more predators to feed on a limited forage.

Q: What about stocking rainbow trout in Sakakawea?

A: Rainbow trout have been stocked in Lake Sakakawea, but have failed to produce justifiable returns. Additionally, as mentioned earlier, the coldwater production facility at Garrison Dam National Fish Hatchery is maxed out and stocking rainbows in the reservoir would come at the expense of other trout needs in the state.

A: Salmon were stocked directly into the Tailrace from 2006 to 2010. During that time the Sakakawea forage base and the salmon fishery were both in poor condition. Conversely, the forage base in Oahe and the Garrison Reach were in good condition.

Each year fisheries biologists place small coded wire tags into salmon, and fin-clip them to indicate that they’ve been tagged, before they are stocked. The codes on the tags allow biologists to evaluate the return rate of individual stockings, as well as where the fish were stocked and returned. The short answer is those salmon that were directly stocked into the Tailrace did very poorly as far as returns to the angler, or to the Department during egg collecting. The good fishing experienced in the Tailrace some years was mainly from fish stocked in Sakakawea that went through the dam.

In the seven years we would expect those 2006 to 2010 stockings to show up, one in seven salmon caught in the Tailrace were from those stockings. Stocking salmon directly into the Tailrace was a poor investment in angler dollars, as they did not return to the fishery in numbers enough to justify continued direct stockings.

With excellent forage in Sakakawea, we are stocking the maximum number of salmon (at the large size currently stocked) that the hatchery can produce. Given the poor returns from Tailrace stocking, it would be a poor choice to take fish from Sakakawea and stock them in the Tailrace where they have not proven to do well.