In the past 15 years, North Dakota has experienced characteristic extreme shifts in weather, which influence short- and long-term fishing opportunities in the state.

Periodically during that time, I’ve provided a North Dakota fishing report card to assess as to how well the state’s fisheries are doing. With more than 2 feet of ice still covering these waters at the time of this writing, but with the promise of open water fishing ahead, it’s time for an update.

Habitat can be a bit of a nebulous word, but in simple terms, the quality of North Dakota’s fishing waters is predicated upon both the quality and quantity of water. Water quality is the more constant of these two parameters and generally doesn’t change much from year to year.

The water quality of North Dakota’s fishing waters comes as a double-edged sword. On the downside, our waters are considered eutrophic, or rich in nutrients. Too many nutrients in a water body leads to excessive aquatic plant and/or algae growth, and in either case can greatly restrict fishing access (nowhere to cast in a weed-choked lake).

Further, in some circumstances when weeds or algae die, oxygen levels in the fishery can be greatly reduced, resulting in a fish die-off. And in recent years, some of our fishing lakes have experienced blue-green algae blooms (again caused by excessive nutrients), resulting in advisories issued by the North Dakota Department of Health.

At the same time, because North Dakota waters are highly productive, fish growth can be exceptional. This is especially true in most of the newly developed prairie lakes that often have high numbers of fathead minnows and invertebrates, both heavily consumed by game fish.

Walleye in these prairie waters grow to keeper-size in just two to three years.

The other component to fish habitat is water quantity. It’s obvious (visible) that this parameter can and does vary dramatically. For example, when I issued my first report card in 2008, North Dakota had 285 fishable waters. Today that number is at about 440 waters, thanks to a long-term wet weather pattern. However, in just the past few years, we’re witnessing a significant decrease in lake levels throughout most of the state (water levels are down 4-6 feet from historic highs) which greatly increases the chance of fish die-offs in summer and winter.

Simply put, we need some decent snowmelt runoff in spring. An increase in the water levels of our prairie lakes, Devils Lake included, would reverse the concerning trend of the past few years. Regarding water quality, the Game and Fish Department’s Save Our Lakes program will continue to address lake problems where possible. However, as stated in the past, long-term solutions to agricultural related water quality issues is a large challenge facing future generations of both anglers and resource professionals. 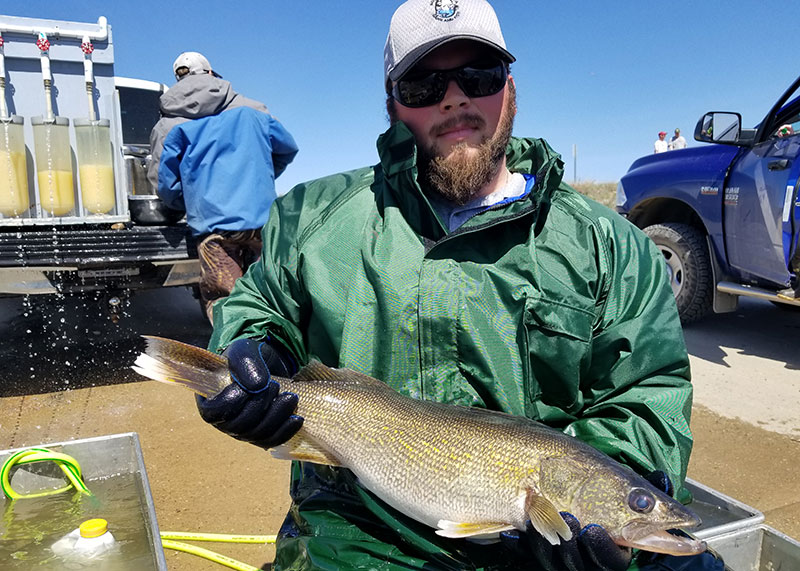 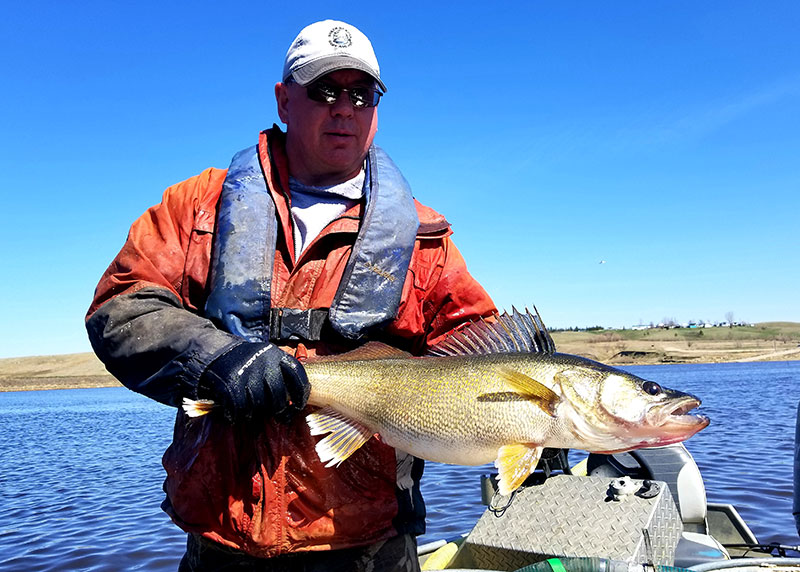 Fishing opportunities in North Dakota have never been better. In 1988, the state had just 168 fishable water bodies. Twenty years later that number grew to 285, and today we have approximately 440 fishing lakes (peaking at 450 in 2017).

With so many new lakes in some very rural settings, playing catch-up is a major challenge. This is particularly true as many of these new fisheries include walleye. If/when a decent walleye fishery is developed, then shortly thereafter the Department usually receives requests to develop a boat ramp. Boating access is key to the development of many of these lakes.

In the past five years, the state has seen the construction of 29 new boat ramps and upgrades at nine others. In total, the Department has participated in funding/developing approximately 270 public boat ramps. For the past few years, and for the immediate future, access to lakes Sakakawea and Oahe, the Missouri River and Devils Lake should remain good.

Providing North Dakota residents, especially those new to fishing, with opportunities to wet a line near home is a years-long priority for the Department. To that end, Game and Fish continues to develop new community fisheries, especially where there is strong local support. Today, about 30 of these community fisheries exist, including relatively new opportunities in/near Hebron, Mandan and Fargo.

More lakes and more fish is a good thing, but it doesn’t go without challenges. Not only is keeping up with boating access a serious commitment, but in recent years other infrastructure, especially fish cleaning stations, have created issues.

It may be hard to believe, but in some waters, fishing has been too good, thus greatly increasing the costs to operate and maintain fish cleaning stations. This issue likely won’t get better soon, but the Department is slowly trying to increase the number and distribution of cleaning stations across North Dakota. 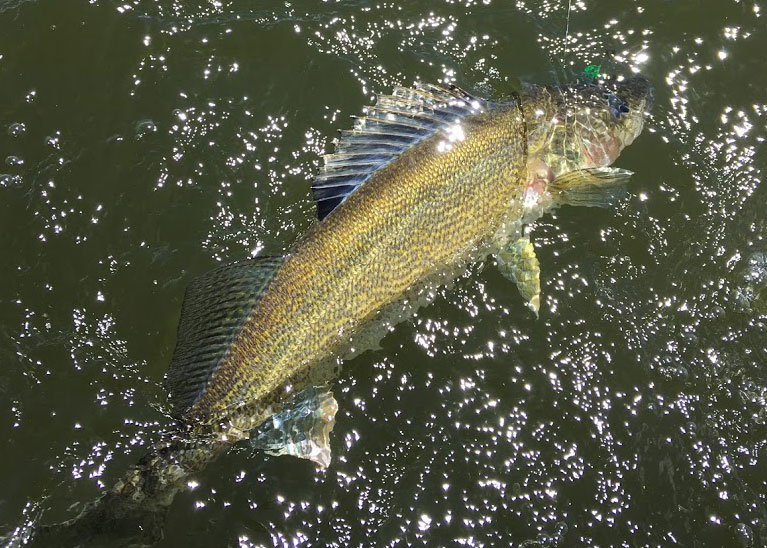 More than 10 years ago I wrote: “Many experienced anglers have stated in recent years that the good days of fishing are now and from a historical perspective they may be right. North Dakotans have been very fortunate for the past 10 or more years for the number of varied and quality fishing lakes available.”

Well, since I penned that, it seems fishing has only gotten better. Currently, as I wrote earlier, North Dakota has about 440 fishing lakes, totaling 782,000 acres.

Overall, North Dakota’s walleye population has never been better. In the last 15 years, about 60 new walleye fisheries (greater than 200 acres), totaling 65,000 acres, are active fisheries or are being developed. With an overall harvest rate of 0.4 walleye per hour on the state’s largest five walleye destinations, North Dakotas’ walleye catch and harvest rates are perhaps the highest in the nation.

Lake Sakakawea’s walleye fishery remains at/near an all-time high and anglers have cashed in, harvesting close to 800,000 fish in 2018. Walleye fishing at Devils Lake was a bit slower in the past year or two, but strong young year-classes should result in good future activity. And the walleye population in Lake Oahe/Missouri River, the last of the big three, continues to be strong.

While northern pike and yellow perch are the next two most popular fish species in North Dakota, populations of these two species have started to regress, as many lakes continue to dry out across the state. Pike and perch need spring flooding conditions to thrive, something that’s been missing for several years.

In addition to walleye, pike and perch, North Dakota offers numerous other species – from paddlefish in the Yellowstone, to trophy channel catfish in the Red, to largemouth, smallmouth and white bass, crappie, bluegill, rainbow and brown trout, chinook salmon and muskie – for some of the most diverse fishing opportunities found anywhere.

As often noted in the past, North Dakota’s fish populations are highly dynamic and largely dependent upon runoff keeping our fishing waters full. Even though both fish health and abundance are still good in North Dakota, we may be nearing a period of notable summer and winterkill in the shallower lakes.

Unless North Dakota experiences significant runoff, the number of fishing lakes could drop below 400. On the bright side, fish populations, especially walleye, in the big three should remain strong for at least several years. 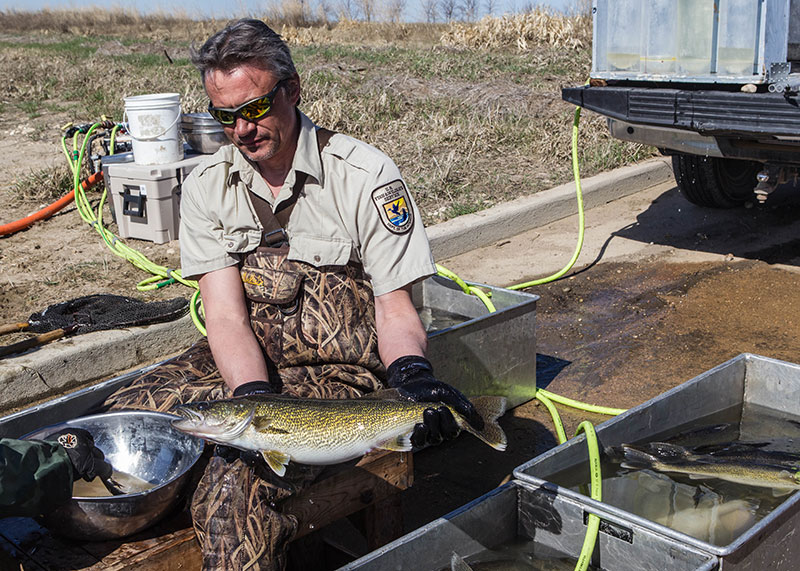 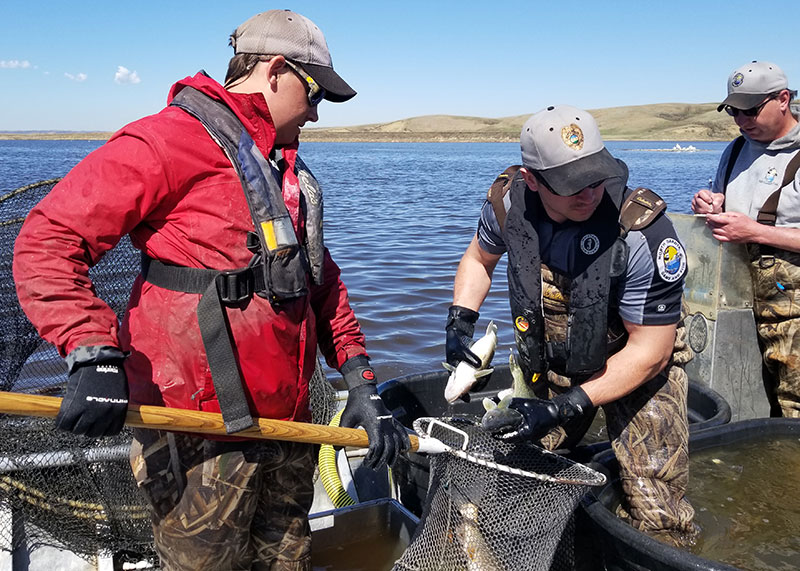 Jerry Tishmack (left), Garrison Dam National Fish Hatchery fisheries biologist, and Game and Fish personnel (right) kicked off the 2018 walleye spawn at Lake Sakakawea in 2018 on May 1. The latest start for the walleye spawn in North Dakota was May 9 in 2013.

The increase in the number of fishing waters statewide the past 30 years has challenged Game and Fish Department staff to keep up with both demand and opportunity. Thankfully, the Department has found ways to make it happen. Lake monitoring (water bodies sampled annually to assess fish populations) has increased more than 50 percent in the past 10 years. Other activities, such as water quality monitoring, research, fish tagging and creel surveys have all increased in recent years.

One of the more important reasons Department staff monitor fish populations is to determine what and how many fish may need to be stocked. North Dakota’s two federal hatcheries, Garrison Dam and Valley City, continue to meet stocking requests. This includes more than 10 million 1.5-inch fish, representing nearly a dozen species, that were stocked into nearly 300 waters last year. In addition, approximately 100,000 adult fish (generally panfish) were trapped from water bodies where surplus existed and transported/stocked into waters in need.

One of the biggest threats to North Dakota’s aquatic ecosystems is the establishment of aquatic nuisance species. In the past few years, more than 300 waters were inspected for ANS, many of them annually.

The Department prioritizes ANS prevention through outreach activities, which include educating anglers/boaters during watercraft inspections. The threat and consequences of ANS infestations are very concerning and will require a concerted effort in future years to appropriately address.

North Dakotan’s continue to enjoy fishing in our state’s lakes, rivers and reservoirs. In recent years, more than one in four resident adults participated in fishing, which is amongst the highest in the United States.

Overall fishing license sales have remained stable for the past seven years, including near record sales of 65,000 nonresident fishing licenses. And anglers spend a lot of money to participate in fishing. According to a recently completed expenditure study, fishing in North Dakota annually was responsible for $788 million in direct angler expenditures and $1.1 billion in gross business volume.

Mother Nature has set a wonderful table, giving North Dakota anglers ample waters to fish. And the Department continues to do its best to serve the best cuisine. Game and Fish has established strong working relationships with many of the fishing public, as well as various public and private entities. As a result, we’ve collectively created and maintained some of the finest fishing that can be found anywhere.

Now it’s up to all of us to get out and wet a line.