Investigating Wildlife in the Badlands

The badlands in western North Dakota, shaped by time, weather and other forces, is best known for a rugged beauty not found anywhere else in the state.

Yet, scattered across this steep, mostly up-and-down country that is so dissimilar to the rolling and flat lands farther east of there, are animals, hardy critters uniquely adapted to terrain that is certainly forbidding in places, but easy to look at.

Elk, mule deer, white-tailed deer, pronghorn, bighorn sheep, mountain lions, sharp-tailed grouse, sage grouse and dozens of other bird species occupy habitat that meets their needs. These animals are as much a part of the badlands as the sagebrush flats, painted hillsides and cedar-choked draws.

It’s the critters, from bighorn sheep that were reintroduced to the badlands in the late 1950s, to the slow-to-rebound sage grouse population that once featured respectable numbers, that have been the focus of Game and Fish Department biologists and researchers for years.

“We’ve been really fortunate over the years to have a good funding source that comes from people buying hunting and fishing licenses and hunting and fishing equipment, that gets distributed back to the states for research projects like the ones we’ve done and continue to do in the badlands and elsewhere,” Williams said. “The research projects provide the Game and Fish Department with additional information about the animals being studied, which is a benefit to managing those species in the best interests of the people of our state.”

The practice of investigating wildlife, in the badlands or other parts of North Dakota, dates back many years, and the need to establish a scientific foundation to provide responsible hunting and fishing opportunities remains.

The need to study wildlife today is arguably more pronounced as the landscape is under more adjustment with expanding urban populations, changing agricultural focus and the influences of energy exploration in western North Dakota.

“Being curious and learning is a great thing, but we need to be able to apply what we’ve learned to the management of those species,” Williams said.

To review, or update, what follows are some ongoing and completed research projects in western North Dakota.

Elk on the Move 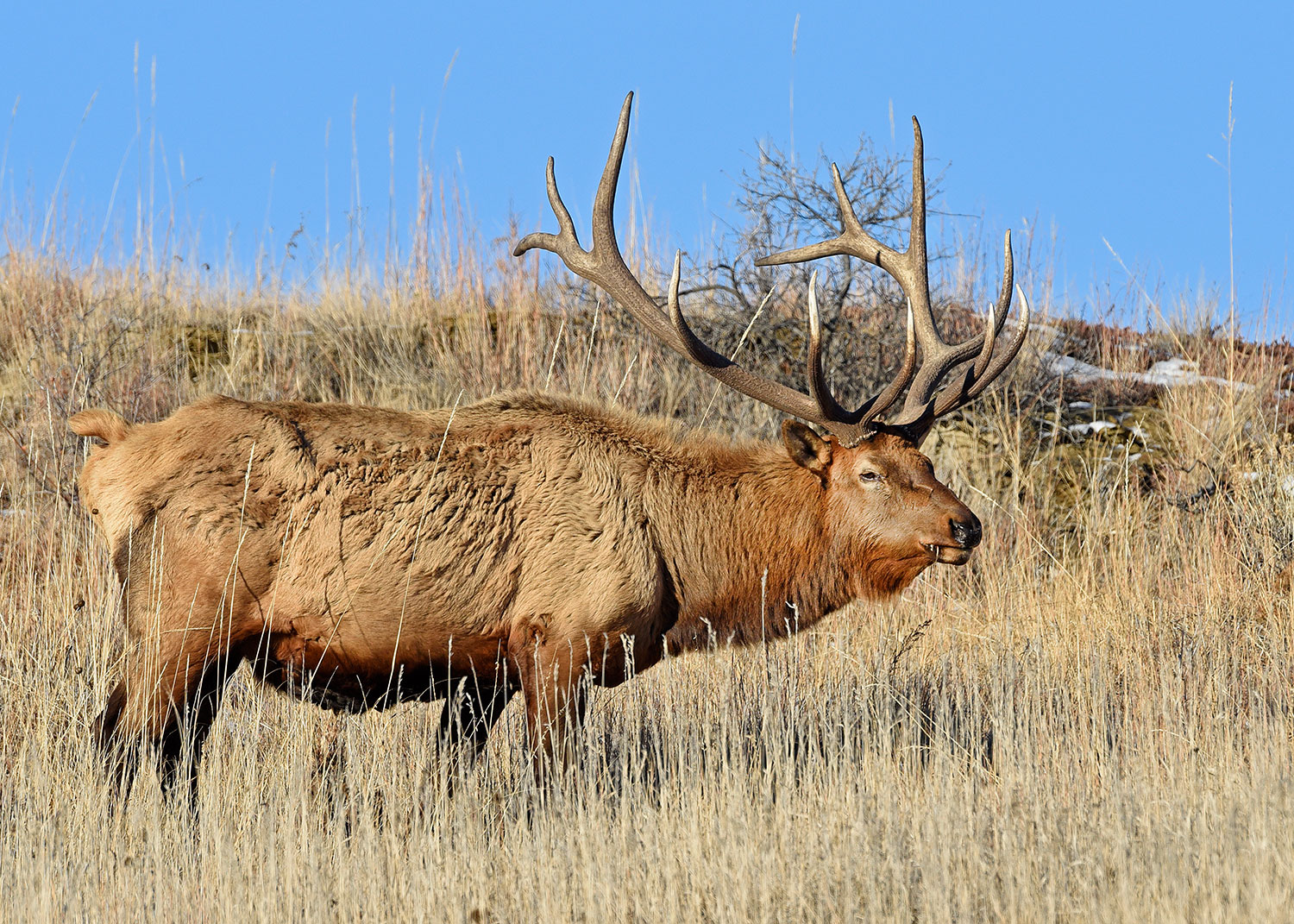 Last winter, the Game and Fish Department, in cooperation with the University of Montana, captured and fit 90 elk – 70 cows and 20 bulls – with GPS collars in an effort to better understand elk distribution and movements in the badlands.

Bruce Stillings, Department big game management supervisor in Dickinson, said the elk dynamics changed considerably after nearly 900 animals were removed from the South Unit of Theodore Roosevelt National Park about a decade ago.

“We’ve seen multiple herds establishing outside the park, both to the north and to the south,” Stillings said. “In addition, we’ve seen changes in elk distribution in our E2 elk hunting unit in the Killdeer area. So, right now there is a real need to have better information on elk movements and distribution.”

Ideally, Stillings added, Department biologists would also like to take the GPS location data and develop a population monitoring technique.

“This research project will help us manage elk by better understanding their home range and survival rates,” Williams said. “It will also help us put together better survey protocols to better understand the number of elk that are out there, so we are able to provide as many hunting opportunities as possible for these prized once-in-a-lifetime animals.” 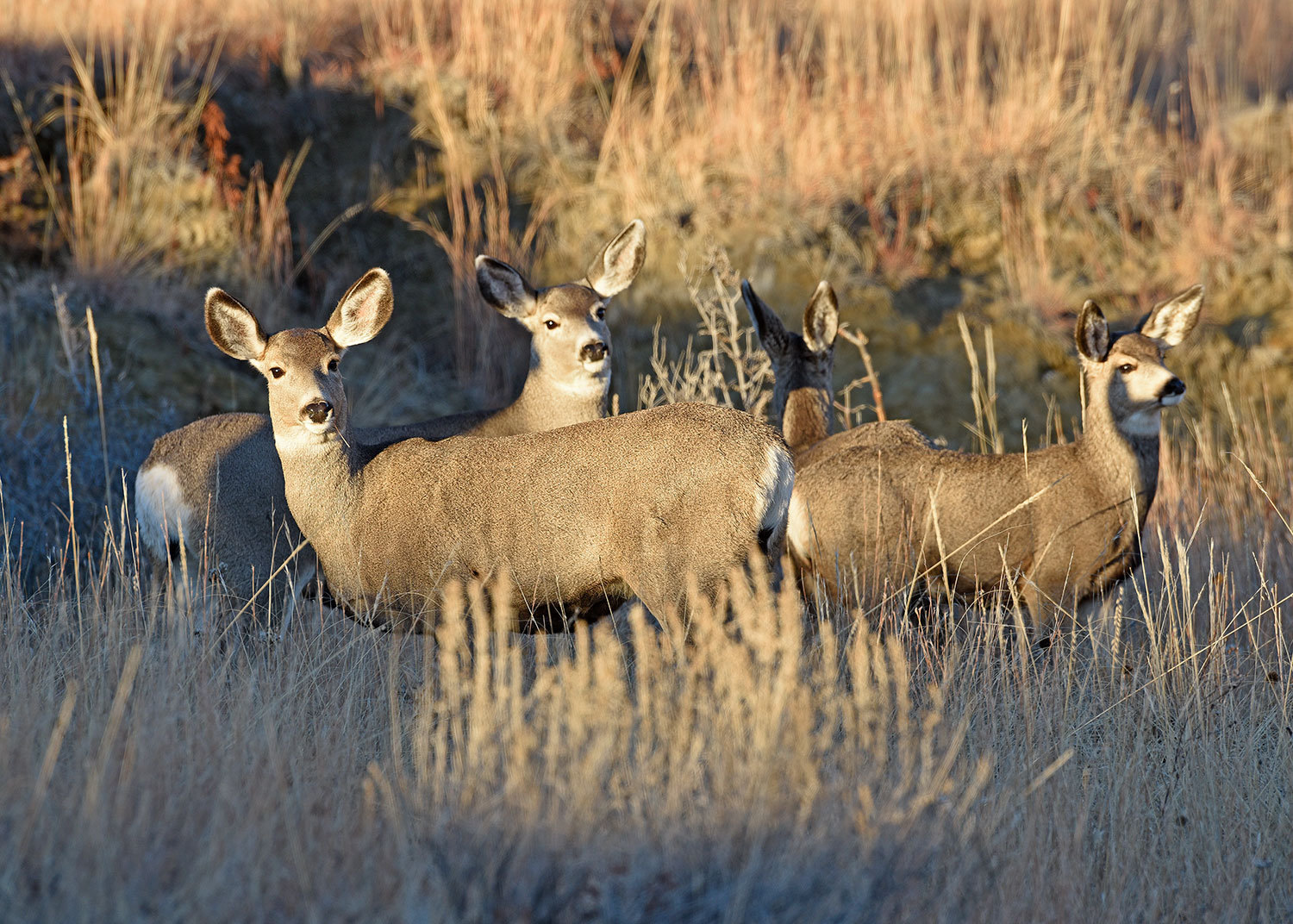 Energy development in the badlands has altered the landscaped inhabited by mule deer and other animals.

While mule deer can be found scattered in other parts of the state, most people think of the badlands when they think of mule deer.

Certainly, the bulk of North Dakota’s mule deer population is found in the badlands where, in the last several years especially, energy development has altered the landscape.

In about 2013, the Game and Fish Department teamed with the State Industrial Commission and other groups on a study to determine the effects of oil and gas development on mule deer in the badlands.

The study included fitting 90 mule deer – 60 adult does and 30 fawns – with radio collars. The collars allowed researchers to track the animals and see how they reacted to a changing landscape and to see if the landscape disturbance influenced mule deer reproduction.

“There are times during the year when mule deer are pretty sensitive, such as during the fawning season and during the winter months,” Williams said. “Some of the research showed that if there can be some coordination between conservation groups, the Game and Fish Department and the oil and gas industry, in terms of planning and timing of some of the developments, that there are some benefits to mule deer.”

Williams said that by combining oil pads, for example, and limiting disturbance during certain times, wildlife officials hope to see some benefits to mule deer over the long-term. 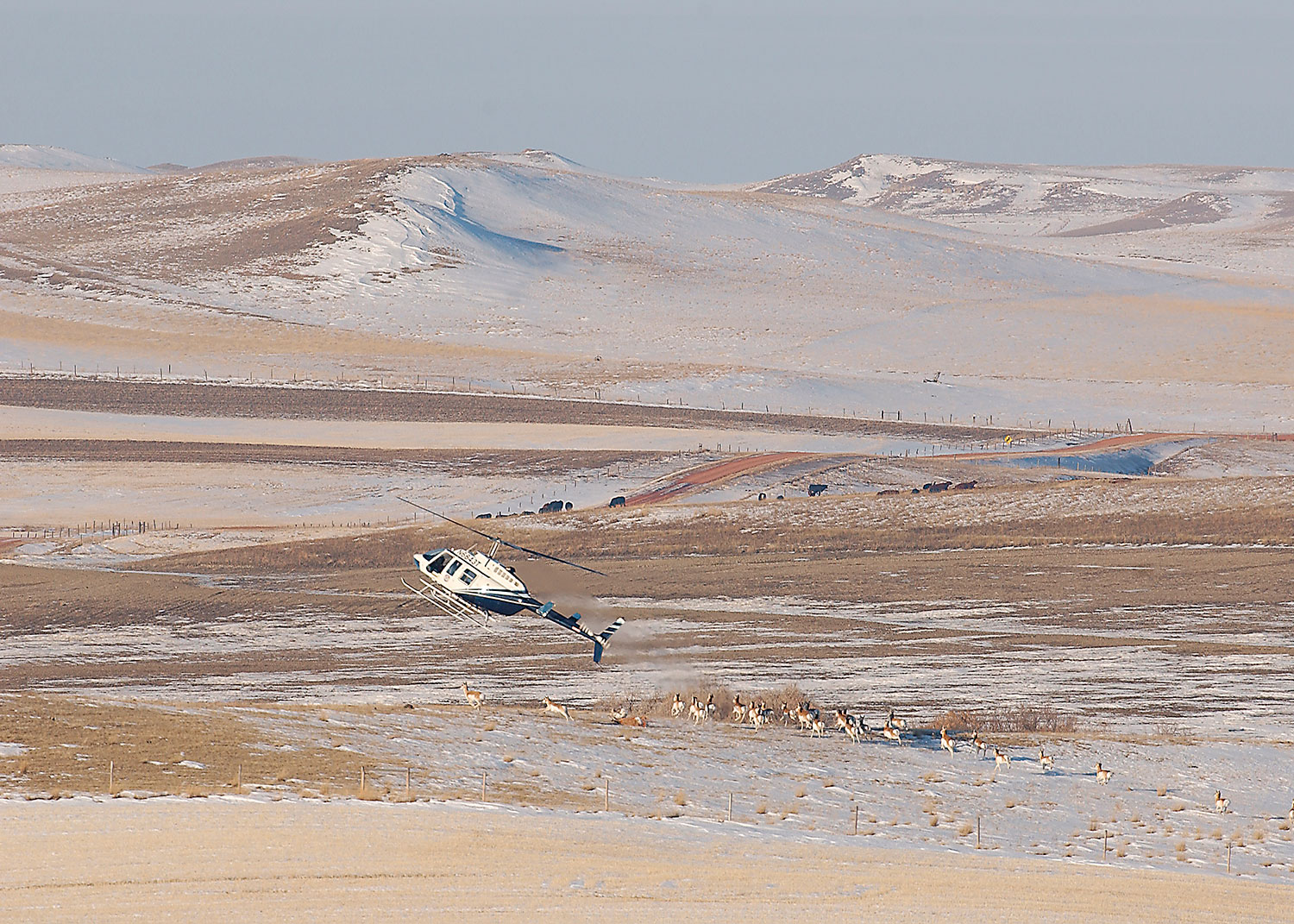 A helicopter assists in the capturing and collaring of pronghorn in western North Dakota more than a decade ago.

In the early 2000s, a five-year pronghorn study was launched in western North Dakota with the hope that findings would strengthen the Game and Fish Department’s knowledge of this big game animal.

In the February 2005 issue of North Dakota OUTDOORS we wrote that the study was designed to identify seasonal home ranges and distribution of adult pronghorn; determine habitat use and preference; and verify survival rates and how animals die.

“We are expected to be the source of information in the state regarding big game species,” Stillings said at the time. “To do that, we need defendable data regarding pronghorn ecology in North Dakota.”

More than 120 pronghorns were captured and radio-collared during the study. The idea, knowing that animals would be lost to hunter harvest, Mother Nature and natural causes, was to keep 40 does and 20 bucks in collars during the study period.

Stillings said wildlife biologists went into the study with a number of assumptions because they had no real proof of pronghorn movements. But now, with data in hand detailing some noteworthy pronghorn migrations from summer to winter range and back, they are better armed to confidently manage a unique population of migrating mammals.

The five-year study, he said, solidified an understanding that the majority of pronghorn observed during summer surveys remained in the hunting units in which they were counted come fall.

Stillings said at the study’s end that the findings supported Department methodology for allocating pronghorn license numbers in hunting units.

“It confirmed that our system of surveying animals in July and allocating licenses for when hunters hit the field in October meshes nicely,” Stillings added. 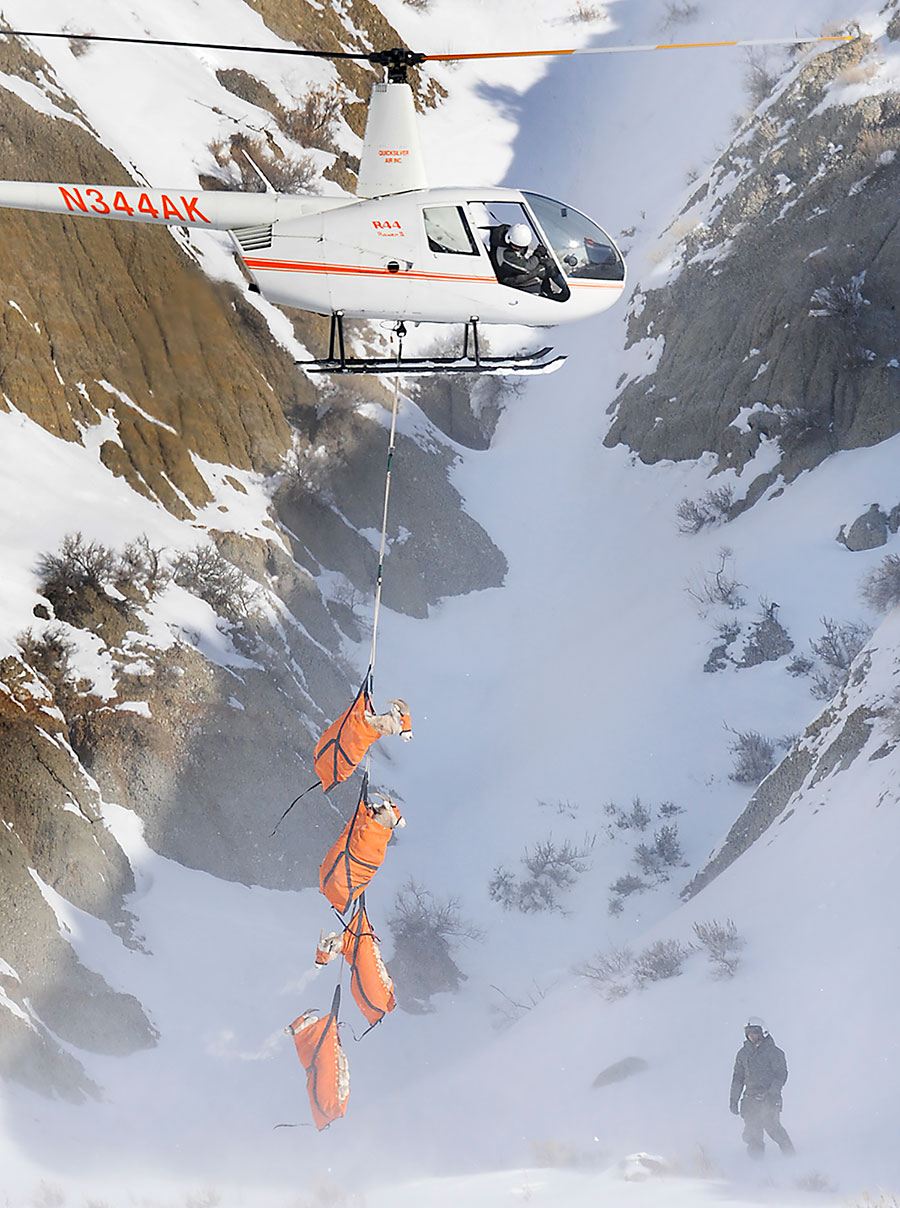 Bighorn sheep being moved by helicopter in the badlands in winter.

Bighorn sheep don’t have a big footprint in western North Dakota because the especially steep, rugged habitat the animals rely on is limited.

Even so: “These animals having a presence in North Dakota is important to a lot of people,” Williams said. “It’s probably one of the species we get the most comments on, the most photos of from people who are out hunting or simply recreating in the badlands. This is an animal that people really admire and really like to see in the wild.”

Williams said the Game and Fish Department has a unique and beneficial relationship with the Midwest Chapter of the Wild Sheep Foundation, as one license, as authorized under North Dakota Century Code, is auctioned in spring by the chapter, from which all proceeds are used to enhance bighorn sheep management in North Dakota.

“There are obviously some people out there who want to come to North Dakota and hunt sheep,” Williams said. “In return, we’re able to take those dollars and benefit wild sheep in North Dakota. It’s been a great relationship as far as funding because, while bighorn sheep are a small amount of what we do at the Department, they are a very important part of what we do.”

Much of what has been written about bighorn sheep in the badlands of late has followed a bacterial pneumonia outbreak detected in 2014.

“A lot of research has shown anytime you have a pneumonia outbreak, that there is anywhere from 30 to 90% mortality in the population,” Williams said. “We are closer to 30%, which is good news. We feel better today about where our bighorn sheep population is compared to 2014.”

Information gathered about mountain lions since the state’s first hunting season nearly 15 years ago is significant, providing wildlife managers with a better understanding about managing these elusive predators.

“We started to get some information prior to 2005 about a breeding population in the badlands, but up until that point it wasn’t documented,” Williams said. “We had the first lion season in 2005. Having an experimental season with a very limited take was a form of research.”

The Game and Fish Department, in conjunction with researchers from South Dakota State University, launched the first part of a two-phase research project in 2011.

Researchers trapped mountain lions, mostly in the northern badlands, in foot-hold traps and foot snares, marking a total of 22 with ear tags. Fourteen of those animals were also fitted with radio-collars.

“Like a lot of our mark and recapture studies, the collared lions gave us a lot of good information about home range, survivability, reproduction … things that we can really look at as an agency to help us manage mountain lions in the future,” Williams said.

The study indicated that, based on carcasses and mortality of radio-collared lions, that mountain lions in the badlands have a 42-48% survival rate.

“That’s about 30% lower than needed to sustain the current population of this size,” said Stephanie Tucker, Department game management section leader, in the February 2016 issue of North Dakota OUTDOORS.

Williams said the study taught agency wildlife managers that hunter harvest can have a big influence on lion numbers.

And without the study, Williams said, there would be so much biologists still wouldn’t know.

“It’s not like you can get some airplanes in the air and get a handle on where the lions are at, what’s their abundance, those types of things,” he said. “Because lions are very, very secretive, about the only way you’re going to learn some things is through a collar study where you get real-time information that is collected over a number of years. Information such as home ranges, reproductive status … This study was important to us as a Department, which put us in a better situation, a better position to responsibly manage these animals.”

Sage Grouse on the Edge 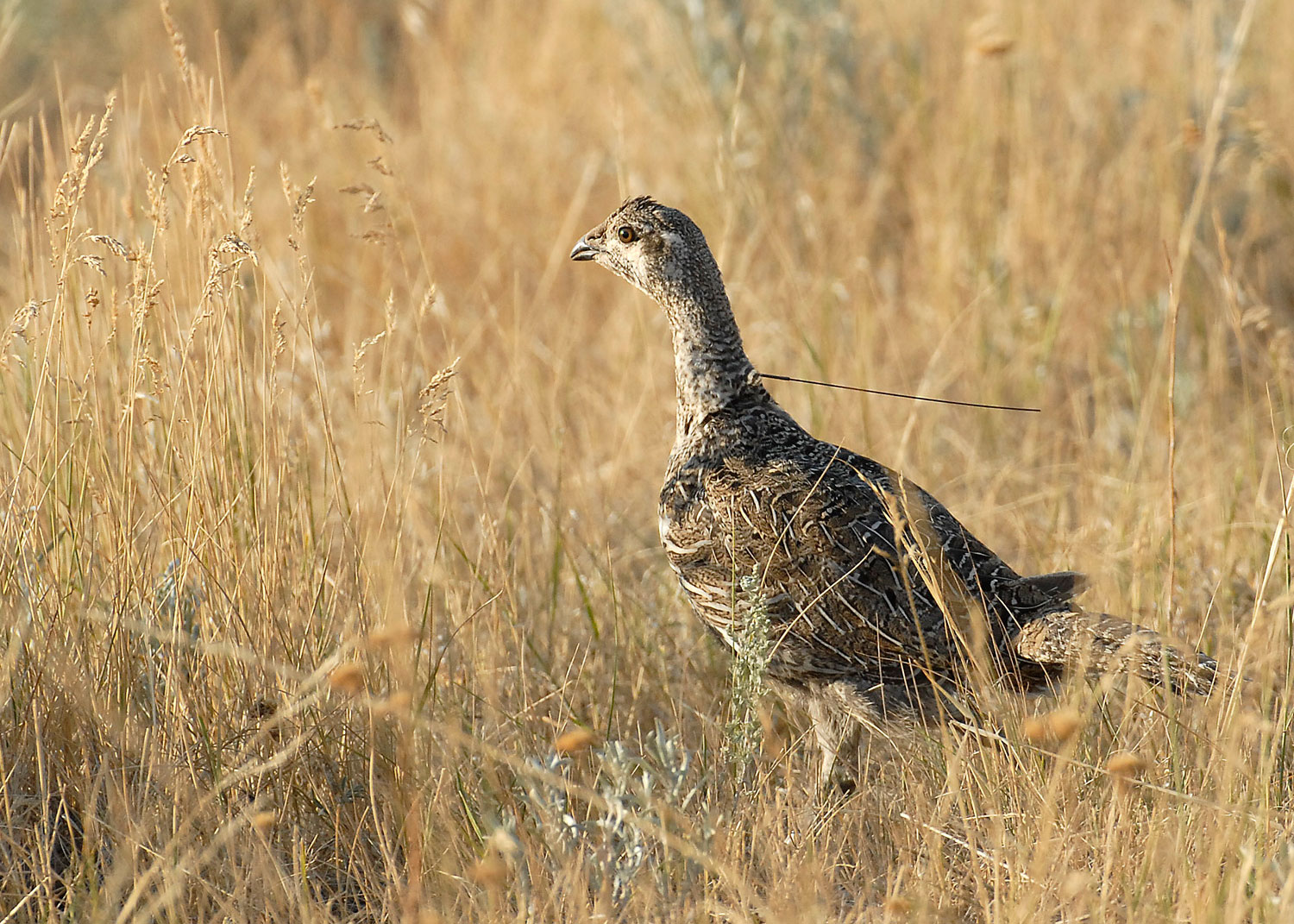 Biologists and researchers are going to great lengths to bolster a declining sage grouse population in southwestern North Dakota. A sage grouse (inset) captured in Wyoming exits a release box on a lek in North Dakota.

While sage grouse in southwestern North Dakota are on the eastern edge of their range where limited habitat and weather make it difficult to thrive, their numbers were never considerable compared to states farther west.

Even so, while suffering setbacks from the West Nile virus and other negative influences in the last decade or more, agency biologists and researchers have been working to bolster the population in southwestern North Dakota that hasn’t seen a hunting season since 2008.

Starting in 2017, while working in conjunction with the Wyoming Game and Fish Department, Utah State University, U.S. Geological Survey and landowners, biologists and researchers have translocated a number of adult sage grouse and young fitted with tracking devices from Wyoming to southwestern North Dakota.

“We understand that anytime you do any type of translocation project, the odds of success are definitely not 100%,” Williams said. “Yet, we understand our responsibility as the state’s wildlife agency that it’s important to try to do our best to make sure these birds aren’t extirpated from the state. We’re hoping to see some success with this effort in southwestern North Dakota.”