North Dakota Outdoors, the Game and Fish Department’s weekly broadcast news feature, celebrates a quarter-century on the air this year.

By early November of 2019, if you’re counting, nearly 1,300 two-minute segments have aired on television stations across North Dakota. In total, that’s roughly 43 hours of airtime.

Mike Anderson, Department video project supervisor, has been with the program the longest. He started as an assistant videographer with Game and Fish in 1995, working with Lex Hames, who was the program’s first director.

Tom Jensen took over in 2001, and directed the program for more than 16 years. Anderson became only the program’s third director after Jensen retired in 2017. 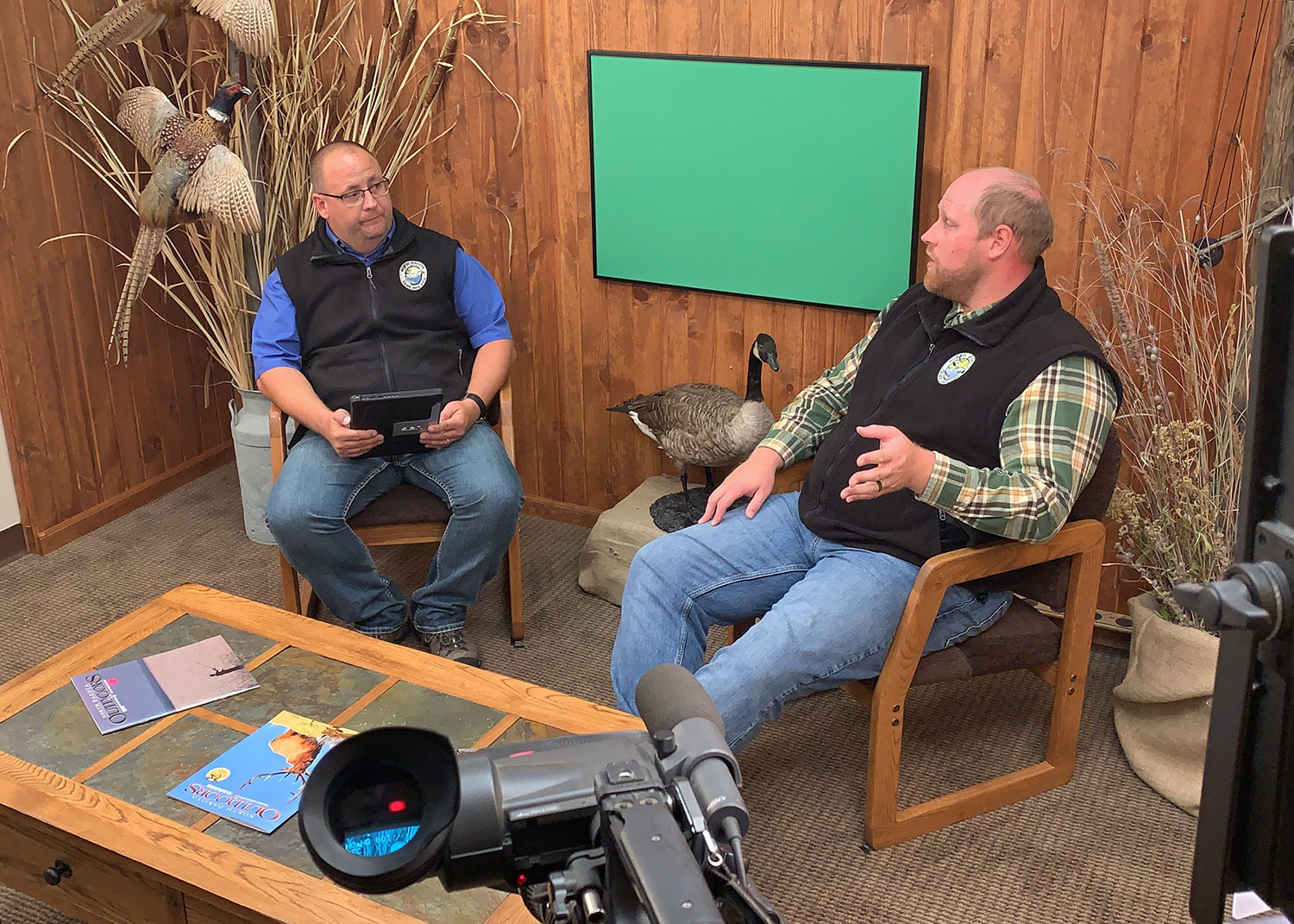 “I’m starting my 25th year, and you’d think we would have covered everything, but with this type of work, there is always something new, something different,” Anderson said. “Our biologists are always studying things that haven’t been studied before or they’re taking another look at animals that need to be studied again. Our biologists are top notch and they continue to find new ways and new technology to get the best information they can.”

While North Dakota Outdoors offers viewers a variety of things, its uniqueness, Jensen said, lies in providing a look behind the scenes.

“The show gives people a look behind the curtain because people really don’t understand fully what game wardens, biologists, and others do at the Game and Fish,” Jensen said. “We provide viewers a peek into a world that is not that familiar to them.”

Within the last year, for instance, a variety of two-minute segments have featured the Department’s effort to capture and fit 90 elk in the badlands with GPS collars to, among other things, study elk movements in the badlands; tag hundreds of paddlefish in the Garrison Reach of the Missouri River to learn more about a mostly unnoticed and unique population of fish; and a bank stabilization project along the James River that will enhance bird nesting and hunting opportunities.

In August 2019, for instance, North Dakota Outdoors featured a piece on the ten-petal blazingstar, which had nothing to do with hooks, bullets, or collaring big game.

The ten-petal blazingstar, a distinctive wildflower that grows primarily in the drier soils of western North Dakota, blooms beginning at dusk, closes during the night and opens again at dawn.

“The ten-petal blazingstar was a popular show that reached a completely different audience and sparked interest in people who maybe don’t always watch the program,” Anderson said. “Every time you do a story you wonder, well, who is going to watch it? What’s the interest behind the story? Some stories we must do, to keep people aware of what the Game and Fish Department is doing. And some stories are like, wow, this is neat stuff and how many people get to see this? Well, now anyone can if they watch the program.”

Game and Fish produces the program all in-house, on deadline every week, so the television stations that broadcast North Dakota Outdoors can confidently schedule it into their evening or nightly news programs. 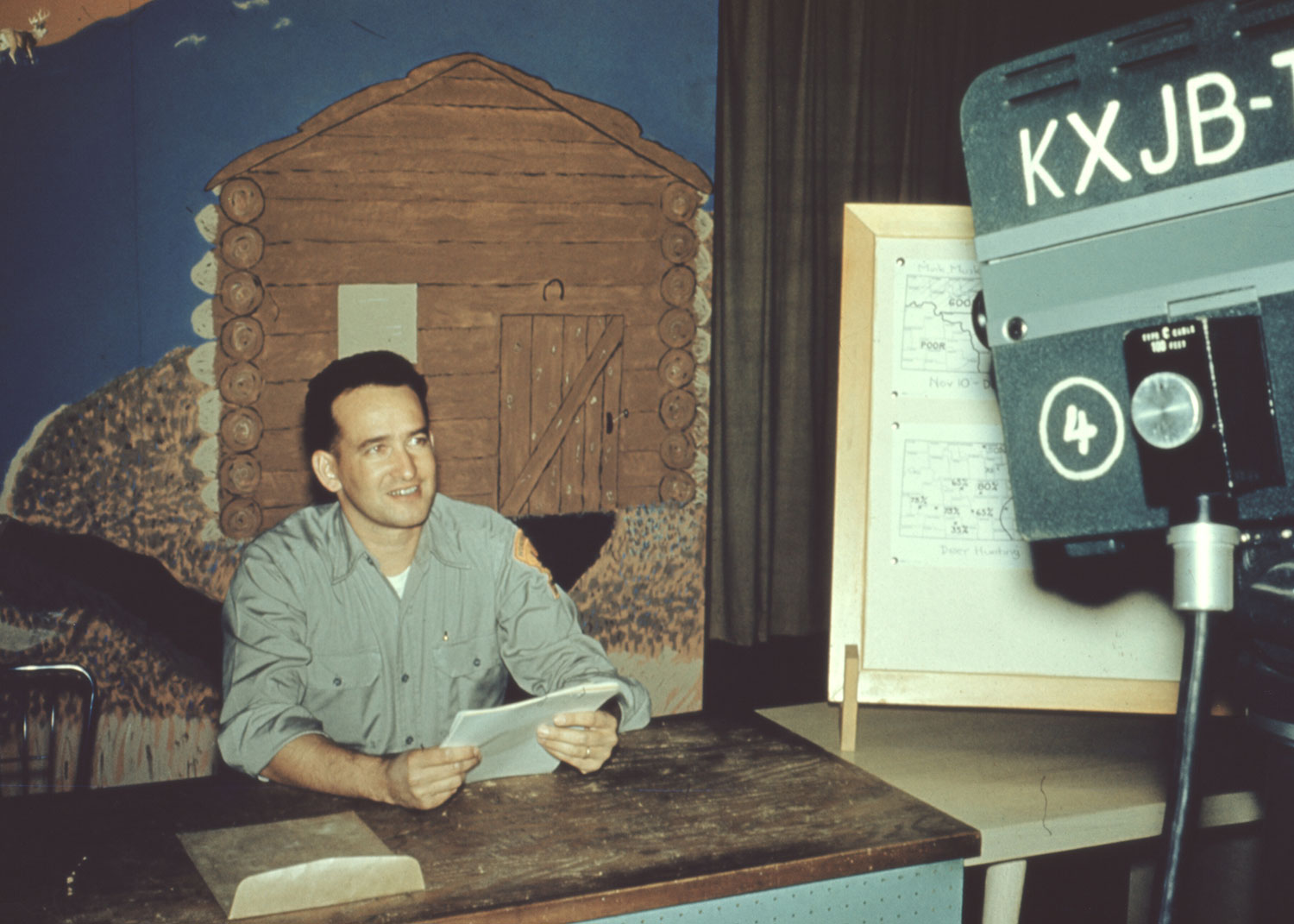 The Game and Fish Department has had an offand- on television presence since the early 1950s. The North Dakota Outdoors weekly broadcast news feature, on the other hand, has run uninterrupted for 25 years.

“That’s one of the reasons that stations continue to carry our program,” said Craig Bihrle, Game and Fish communications supervisor. “We’re also careful to offer stories that typically appeal to a broader audience than just hunters and anglers. A lot of hunters and anglers are among the audience of nightly broadcast news, but so are those who don’t participate. It’s important that we provide stories that can appeal to diverse audiences.”

While it may sound cliché, Anderson certainly doesn’t mean it to when he touts the assistance of Game and Fish staff when it comes to putting 52 shows together a year. And that’s in addition to Game and Fish’s weekly website-based news program, Outdoors Online, which Anderson also hosts and directs.

“Our staff, in my opinion, is the best you could ask for when you’re producing these types of programs,” he said. “Every department from fisheries, wildlife, conservation, education, enforcement and administration does whatever’s necessary to make sure the program is a success.”

Jensen agreed: “Coming up with stories ideas can be difficult and is difficult, unless you have good cooperation with staff like we did. I would often get calls or emails from staff saying they had a good story idea and they were often correct.”

Anderson said a two-minute segment on soft-shell turtles that ran in September is a good example of the collaboration he often experiences.

“Paul Bailey, one of our fisheries supervisors, came across a couple of soft-shell turtles on the Missouri River and took the time to get some video and the video is pretty spectacular,” Anderson said. “People have heard of and seen painted turtles and snapping turtles in North Dakota, but how many people know about soft-shell turtles? Not many, I’m guessing. This will be a cool show because of help from staff.”

Much has changed in the video news industry since the program’s inception, including the jump to broadcasting in high definition in 2011.

Also, the cameras Anderson hauls around in Department fisheries boats and in the badlands today are much smaller and lighter, yet produce higher quality images than the equipment of old.

“I noticed as I got older the heavier the camera equipment was getting … When I look back at, say, hiking in the badlands, I wonder how in the heck I ever did it,” Anderson said. “With the new cameras, which are about a quarter or half the size of the old cameras, getting places is easier and in many regards, makes it easier to film.”

Anderson said he’s not thinking about the program’s next milestone, just putting together a program for next week.

“The TV stations, which have aired North Dakota Outdoors for years, have been amazing to us,” Anderson said. “It’s a collaboration, a partnership between Game and Fish and the TV stations to provide quality video and content. Many of these stations have been running the show every week for 25 years.” 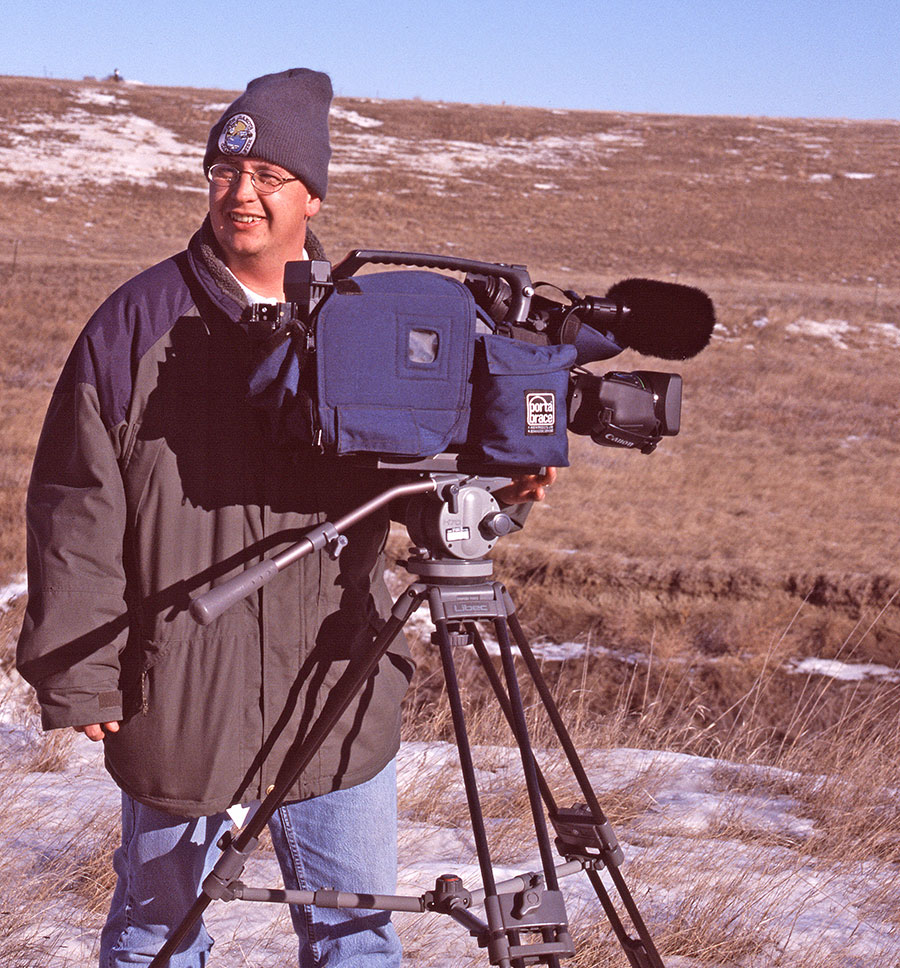 Mike Anderson behind the camera sometime in the late 1990s.