While it’s difficult to fathom why some people vandalize signs, it’s not hard to understand, certainly from a safety standpoint, the want to curb the wanton destruction.

The North Dakota Game and Fish Department, through its hunter education program, has joined the effort in educating young hunters of the dangers of shooting at road and other signs, such as those that promote the Department’s Private Land Open To Sportsmen program. 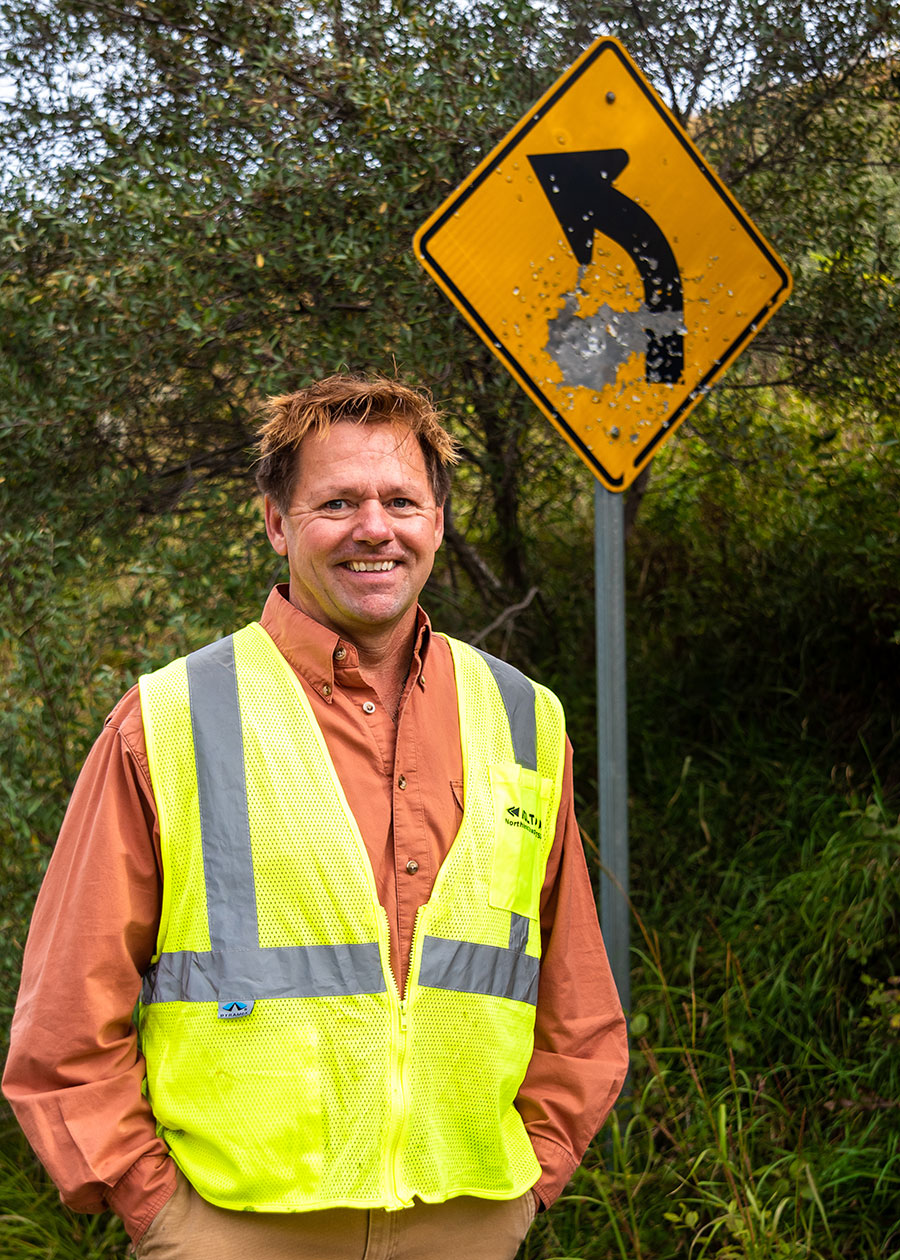 “The Sign Warrior program started conceptually in 2014-15 when Rhonda Woodhams, with the Williams County road department, showed us a sign that had about 400 rounds that had been shot at it … totally demolished,” Heglund said.

“So, that got us to thinking about how we could help,” Heglund said. “How could we protect the public and create a program that saves signs to save lives.”

Heglund said there were a number of things, including county sheriff department personnel going into classrooms to discuss the risks of damaged signs to motorists, that were the building blocks to the Sign Warrior program.

“Last year we kicked off with a calendar for fourth-graders,” he said. “We had a poster contest in all fourth-grade classes across the state and we had students draw an imaginary character that would be a Sign Warrior savior that’s out to protect us, to protect the signs so we can drive safely.”

Heglund said 50% of the signs in some North Dakota counties are replaced annually. Considering the costs of replacing the signs, doing so on a regular basis can be a financial burden to some counties.

Heglund said it’s unlikely that the vandals who shoot and damage signs think about those they are putting at risk.

“They don’t realize that when a sign is shot, motorists don’t get that bounce-back of light needed at night to read a sign correctly and get the message it’s trying to deliver,” Heglund said. “And when that’s the case, bad things can happen.”

Heglund said this bounce-back of light from road signs becomes even more critical as we age. 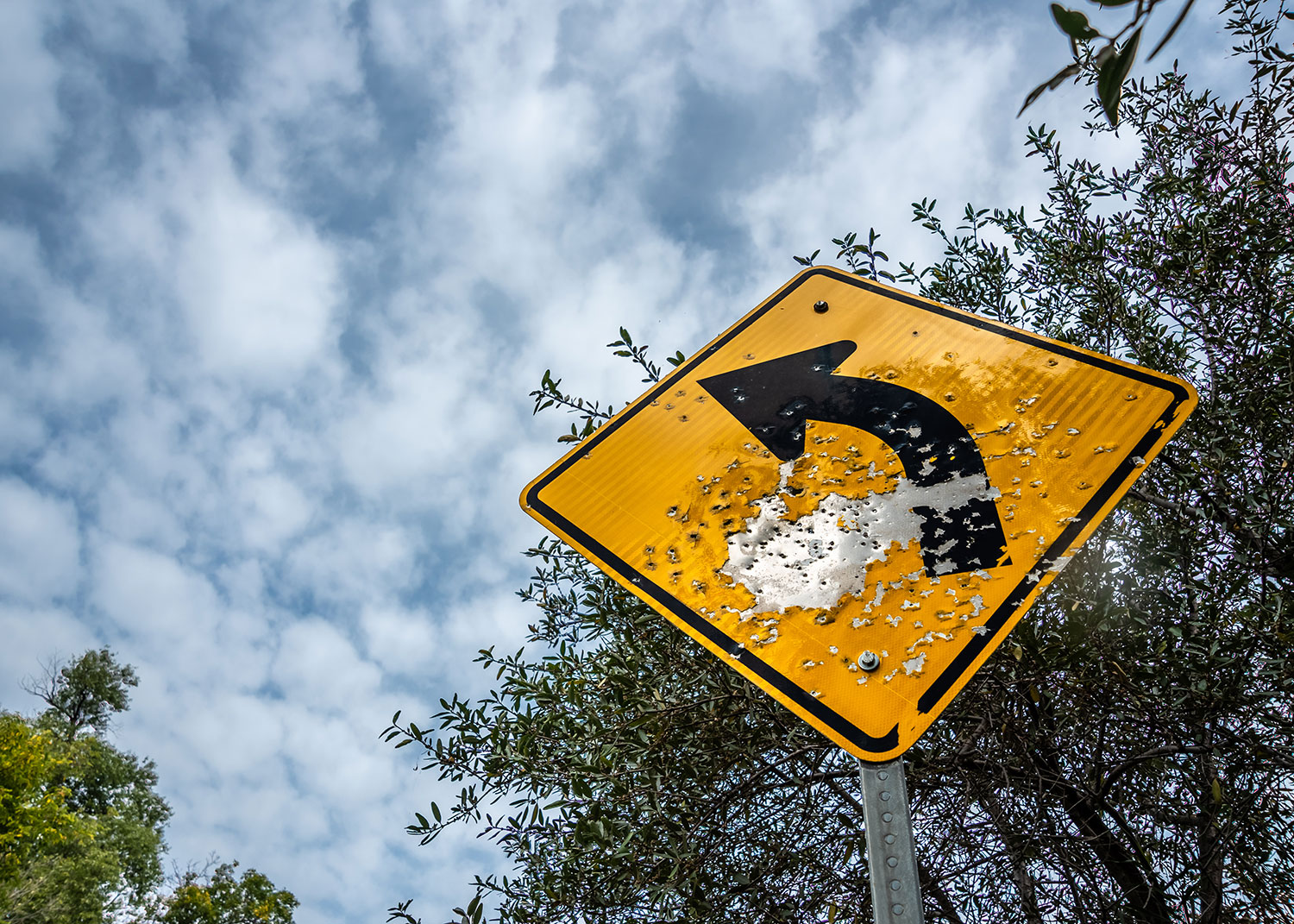 Under the cover of darkness, it’s difficult to read road signs that are so badly damaged.

“At my age, nearing 60, I need about eight times the amount of light to see the same sign that a 20-year-old needs,” he said. “The point is that as we age, we need the message from signs to come back clearly so we can navigate the roadway safely.”

John Mazur, Game and Fish Department hunter education coordinator, said when Heglund approached him about the sign initiative, he thought it was the perfect opportunity to reinforce something hunter education volunteers have been teaching students.

“As far as Game and Fish is concerned and hunting is concerned, we have both a direct and an indirect impact from people shooting signs,” Mazur said. “Of course, we have our own signage, like PLOTS and WMA signs, and when those get shot up, we have to replace them.

“But there’s also that indirect impact because of what’s associated with it when a sign gets shot, especially out in the country,” he added. “People say that a hunter did it. Well, we don’t want that message to be out there because it’s not a hunter at that point when they’re shooting signs. They are vandals.”

Plus, those people pulling the trigger are breaking the law.

“When we hold up a shot-up sign in class and we ask the kids who did this, the first thing they say is that it was shot by a hunter,” Mazur said. “No. No. No. That’s our answer. We need to separate from that, and this sign initiative goes great with the message we want to send forward because our image to the public, especially the nonhunting public, is very important.”

Mazur said hunter education students are now provided handouts in class about vandalism and the negative impact of shooting signs. Students are also shown signs that have been vandalized.

“When we show the signs in class, we have an open dialogue, which is the best way to deal with the issue,” Mazur said. “We talk about the dangers of shooting signs because they are elevated and not knowing what’s beyond the target and where the bullet will end up.”

Heglund said sign vandalism isn’t something that has reared its ugly head just of late. People were damaging signs nearly 100 years ago when a roadway network was being developed across the country.

“Our effort now is to really drive home the point that it’s somebody in our neighborhood that is doing the damage,” Heglund said. “Let’s put an end to this because if we don’t see a sign and we miss the message, we run the risk of not making it home safe that night.”