The species name for the North American “moose” is said to have its roots in Algonquin language, and depending on the source, can mean anything from “stripper of bark” to “twig eater.”

Either of those generally sum up what moose typically eat, as they easily extend their head and neck up to 8 feet off the ground, to reach leaves and tender branches that pretty much no other North American land mammal can get at.

While they may appear a bit clumsy, with their long legs supporting an upper body that can weigh more than half a ton, adult moose exhibit almost a nonchalant agility as they easily munch off branch after branch on their way to consuming sometimes 50 pounds of food a day.

When the best food available is on the ground, however, that’s a different story. Unlike other wild North Dakota ungulates like deer, elk and pronghorn that simply lower their heads to nibble at grass or other plant material on the ground, it takes a little extra effort for moose to do the same thing.

If whatever is down there seems worth the effort, they’ll gingerly bend one knobby front knee, and then the other, to establish support on the ground so they can lower their head within striking range. When they want to move on, the process is reversed as they slowly push up one leg and then the other to return to a standing position.

In northern forested areas where moose normally live, they don’t typically have to resort to feeding on their knees, but here in North Dakota where moose are now fairly common in the prairie/agricultural landscape in the northern half of the state, they often eat other things besides leaves and twigs.

In the winter, moose, like those in these photos, are often visible in crop stubble fields, putting in a hard day’s work to keep their bellies full. 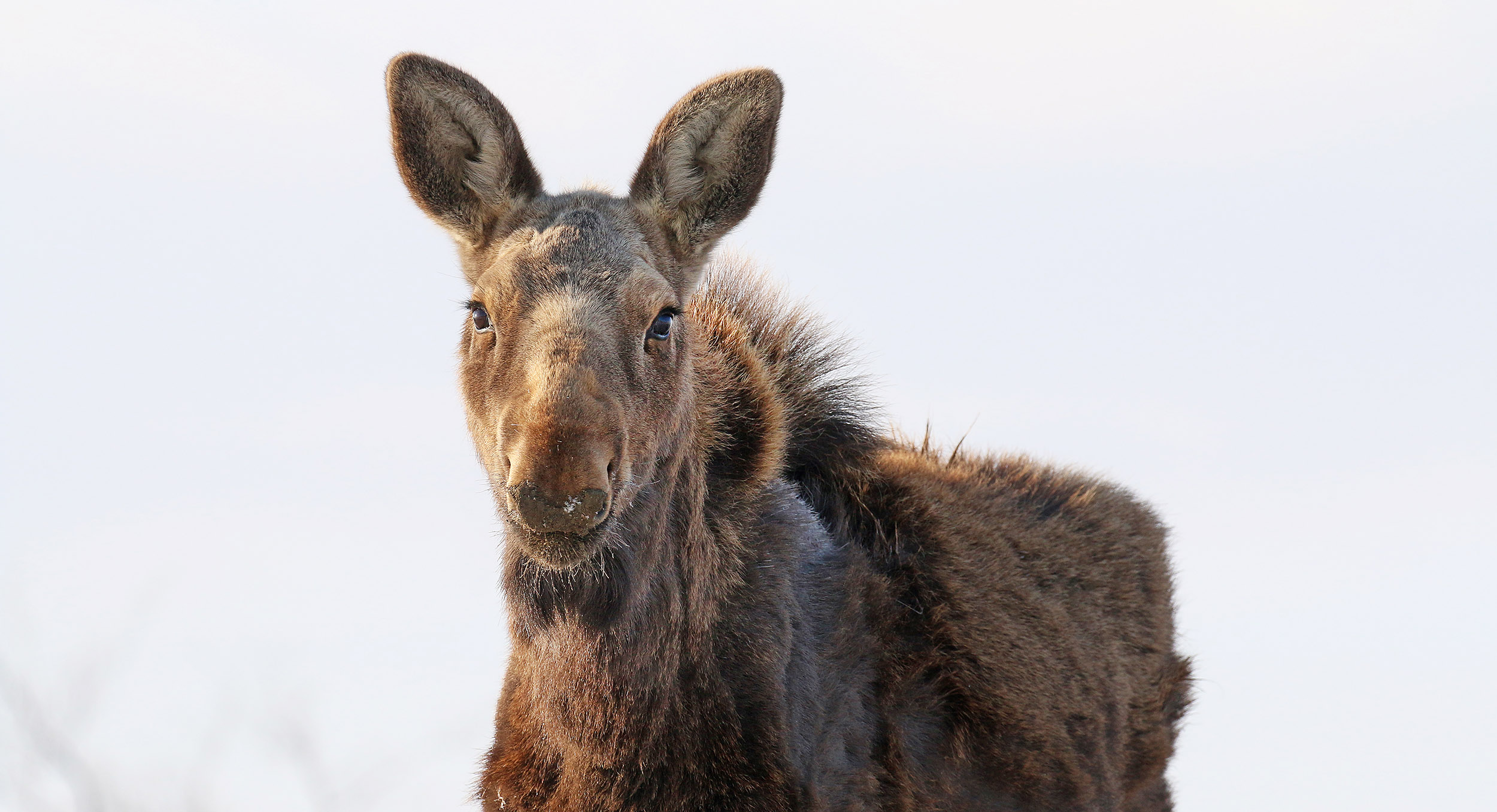 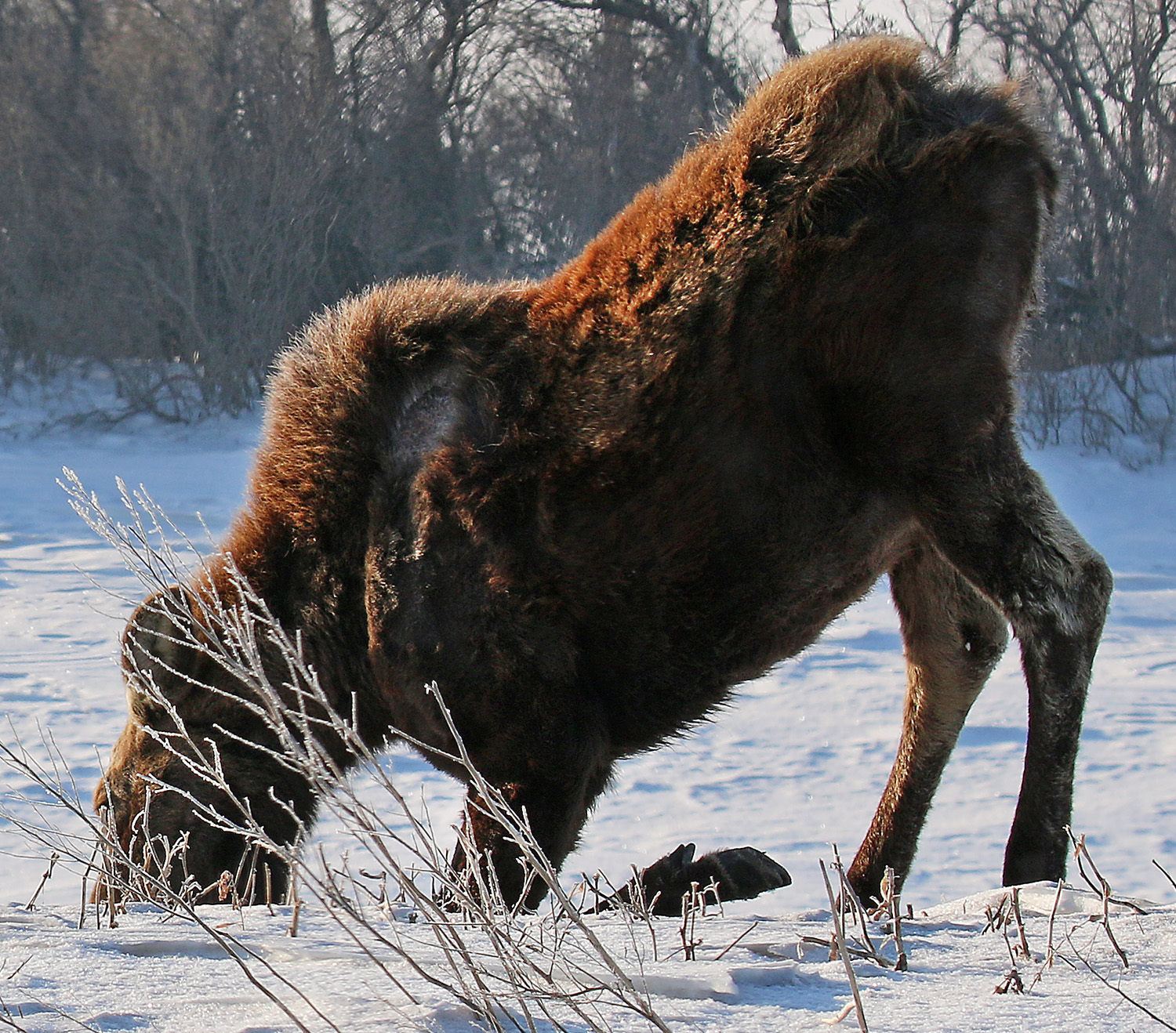 The bare patch on the shoulder of the cow moose in this photo and also visible in other photos in this essay, is the start of hair loss due to winter ticks, according to North Dakota Game and Fish Department big game biologist Jason Smith. Typically, Smith says, the damage to the hair is done while the moose is grooming, in an attempt to rid itself of those parasites, and you generally see a pattern of hair loss or damage as the winter progresses.

The amount of hair loss can somewhat depend on the load of ticks that a moose might pick up in the fall and how aggressive the moose is in grooming itself. Hair loss is generally fairly minimal from October to January, but can really pick up from February to April, Smith added.

Eastern states like New Hampshire and Maine have experienced significant moose mortality from winter ticks in some years. Smith says the ticks have not been a significant mortality factor in North Dakota, but Game and Fish does see a handful of cases each year where a moose death could be linked to the ticks. 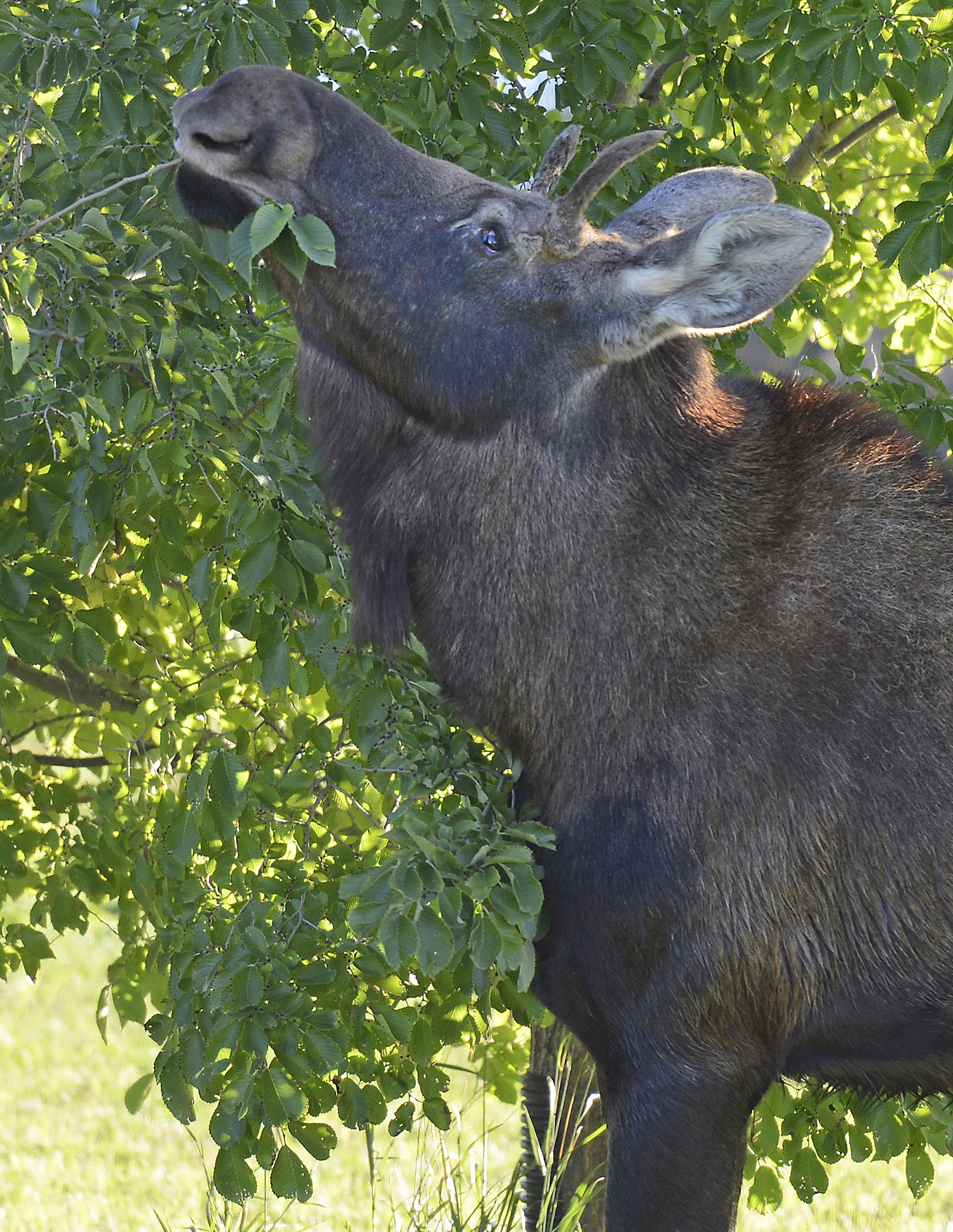 Often measuring 6 feet or more at the shoulder, with a large head and neck on top of that, moose are at ease feeding on leaves and twigs that are out of reach of other North American land mammals.