About 20 bighorn sheep in western North Dakota roam the suitably rugged terrain south of Interstate 94, which runs east and west across the lower half of the state.

This small group of animals that inhabit places called Bullion Butte and Cliffs Plateau is what remains of a population that, in its heyday, numbered upwards of maybe 100 bighorns.

While bighorn sheep were reintroduced to the badlands north of I-94 in 1956, it wasn’t until the 1960s that these surefooted animals were captured and then released south of the interstate.

The history of bighorn sheep in the southern badlands is a roller coaster tale. Unfortunately, it’s been mostly down of late.

Brett Wiedmann, North Dakota Game and Fish Department big game management biologist, Dickinson, said there are a number of obstacles bighorn sheep must navigate during their lifetimes, and disease is one of the most troubling hurdles.

In the late 1990s, four separate bighorn populations were decimated by disease – two were wiped clean from the map – south of I-94. 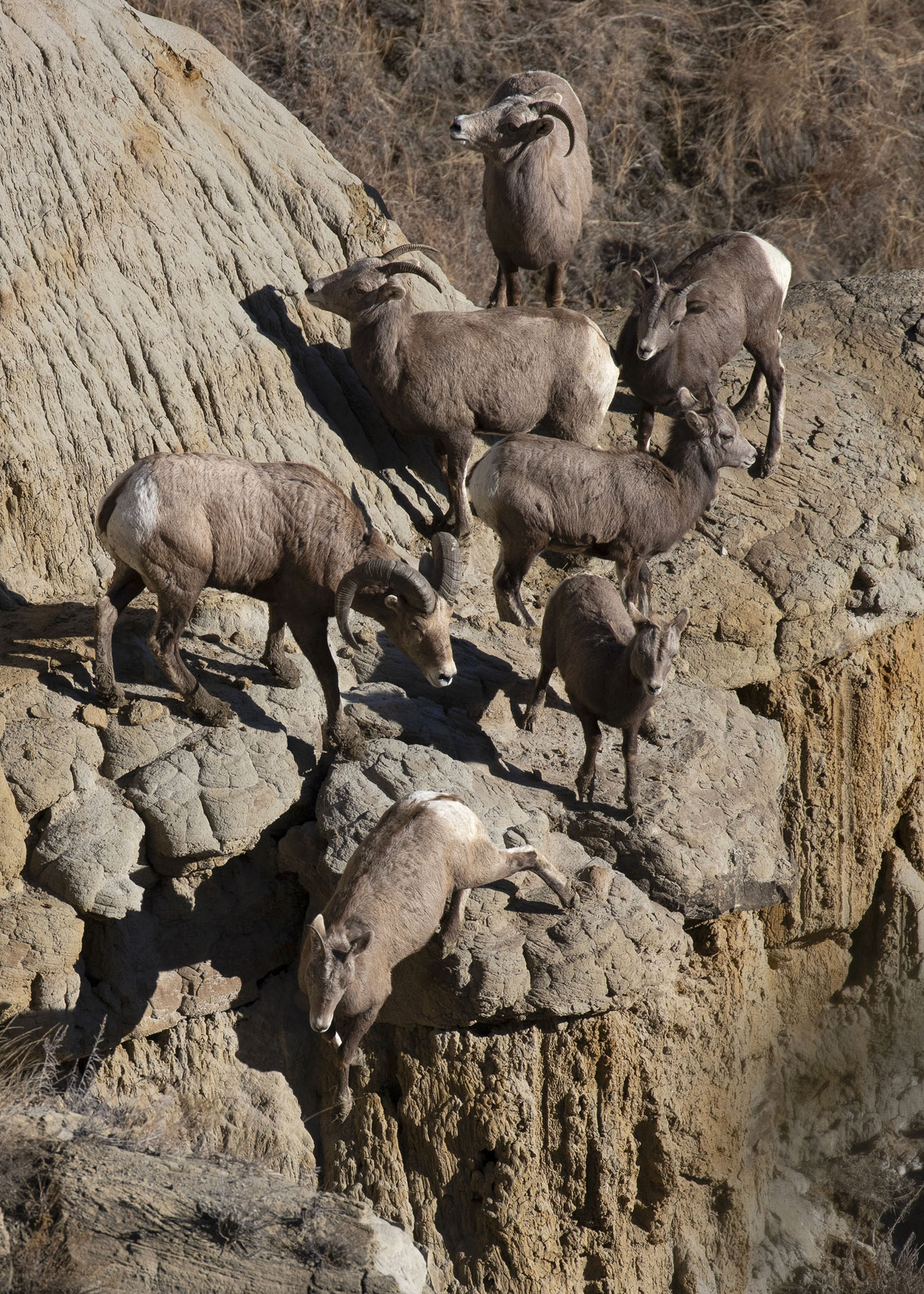 Only 20 or so bighorn sheep found south of Interstate 94 in western North Dakota.

“In 1997, there was a pneumonia die-off and the population declined to about 20 animals at that time,” Wiedmann said.

It was determined the wild animals were infected by Mycoplasma ovipneumonae. This bacterium that leads to the death of bighorns is common in healthy domestic sheep and goats.

The southern badlands bighorn population eventually rebounded to about 80 animals, before declining again.

“We just kept getting these pulses of pneumonia and very low lamb recruitment,” Wiedmann said.

What big game biologists learned over time is that Mycoplasma can’t survive without the host. Understanding that, introducing healthy animals into a population of pneumonia survivors is futile when trying to rebuild the herd.

To have a healthy, and eventually growing bighorn sheep population south of the interstate, Wiedmann said all of the infected sheep – about 20 animals – must first be removed from the landscape.

At advisory board meetings around the state last fall, Game and Fish Department officials introduced to those in attendance a plan to depopulate the small southern badlands herd before reintroducing healthy animals from out-of-state.

“If you want to get bighorns back on the landscape, you have to depopulate … you need to get rid of them all,” Wiedmann said. “Hypothetically, because Mycoplasma can’t survive without the host – and because it’s not found in the soil, in the feces, or anything like that – you can kill those bighorns and then reintroduce healthy animals within a few days and they’ll be fine.”

The first step in the depopulating process was opening the bighorn sheep hunting unit B1 south of the interstate, which had been closed for years. Last fall, hunters shot three tremendous rams, including a new state record, Wiedmann said.

While it’s likely that Game and Fish will use hunters who draw once-in-a-lifetime licenses for whatever number of rams that remain in unit B1, it hasn’t been decided what to do about the ewes.

“We want hunters to be the first option in harvesting the ewe population,” Wiedmann said. “What’s important is that we get them all and that’s the tricky thing.”

Casey Anderson, Department assistant wildlife division chief, said that while Game and Fish could use hunters to harvest the ewes, there are things to consider before issuing licenses. Such as, would the ewe bighorn sheep licenses be considered once-in-a-lifetime or not?

“I’ve talked to hunters who said they would harvest a ewe, thinking they would never get a ram license because they are so tough to come by,” Anderson said. “So, yeah, there are some people who would consider taking a ewe as being a once-in-a-lifetime deal. Of course, there are others who would want to hunt rams and nothing else.”

In 2019, a record 15,518 people applied for a bighorn sheep (ram) license in the badlands. The Game and Fish allocated just five licenses last fall, and one of those, authorized under North Dakota Century Code, was auctioned by the Midwest Chapter of the Wild Sheep Foundation. 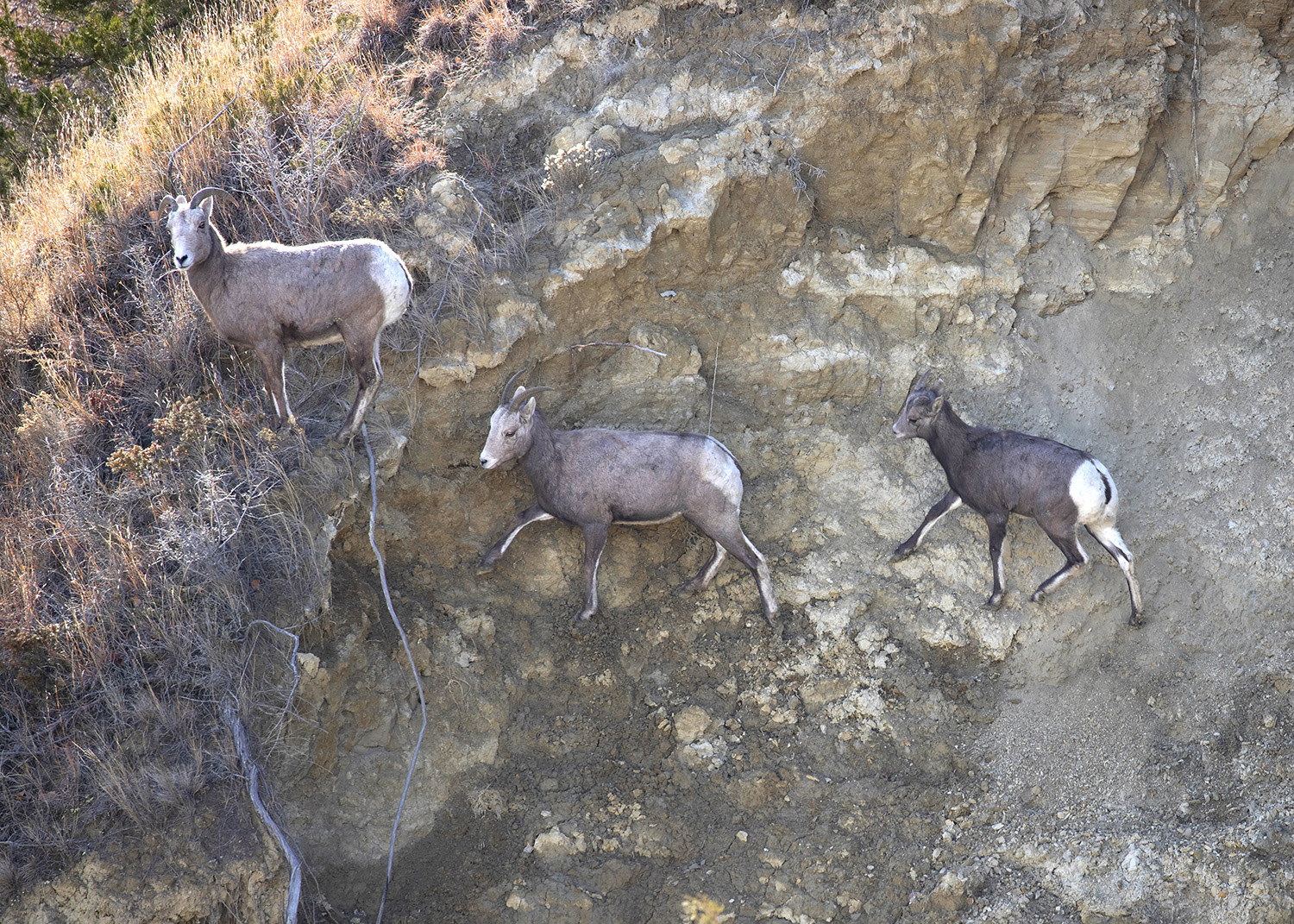 In the late 1990s, four separate bighorn sheep populations were decimated by disease south of Interstate 94 in western North Dakota.

Because it’s likely that the Game and Fish Department could receive bighorn sheep from out-of-state and release them south of I-94 next winter, a decision needs to be made on how to remove the existing animals.

“If we don’t act, we might be putting it off for another year,” Anderson said.

Also, Anderson said the threat remains that bighorn sheep south of I-94 may wander away from their accustomed digs and possibly expose the much larger bighorn population north of the interstate to more problems.

While it’s true that a bacterial pneumonia outbreak was first detected in the northern badlands in 2014 and remains ongoing, Anderson said biologists aren’t certain the strains of pneumonia on either side of the interstate are the same.

“The risk that remains is the strain of pneumonia down south is different than the one up north,” Anderson said.

Wiedmann said in his view, because the strain of Mycoplasma in the northern population doesn’t appear to be as virulent as the strain down south, the priority is to depopulate bighorns in the southern badlands to protect the health of the herd north of I-94.

This proposed depopulation plan isn’t new, Wiedmann said, as it’s been successfully employed in Colorado, Nevada and other states.

Wiedmann said the bighorn sheep population north of the interstate, which includes approximately 30 animals in the North Unit of Theodore Roosevelt National Park, stands at about 330.

“It’s a very realistic possibility that we could eventually have 500 bighorn sheep in the northern badlands where there is a lot more suitable habitat than down south,” Wiedmann said. “And, you know, we’d be pretty happy if we ultimately had 75 bighorns south of the interstate.”

While the bighorn sheep population in western North Dakota has long provided limited hunting opportunities for more than 30 years, Anderson said Department wildlife managers understand the big picture when it comes to managing this unique species.

“It’s one of those species that people want to see in the wilds, but it’s a tall order in places like Montana and Wyoming,” Anderson said. “Yet, people have a pretty good chance of seeing one of these animals in the badlands.”