Nelson Lake in Oliver County is distinct. It has long been labeled the best largemouth bass lake in a state where walleye rule and northern pike have, since 1969, unknowingly shouldered the renown of being the state fish.

Nelson’s unique stature is a byproduct of the Milton R. Young Station, a coal-fired power plant in Oliver County that has produced electricity for a half-century. Even during the leanest months here on the Northern Plains, warm water released from the facility creates a year-round open water environment, which allows largemouth bass a longer growing season than anywhere else in the state.

The North Dakota Game and Fish Department manages the fishery, which means on an annual basis from about mid- to late May, fisheries biologists conduct an electrofishing survey to determine, among other things, the predator/prey balance in the lake.

The photographs that follow document the nighttime electrofishing operation that has long played a significant role in managing this popular largemouth bass fishery. 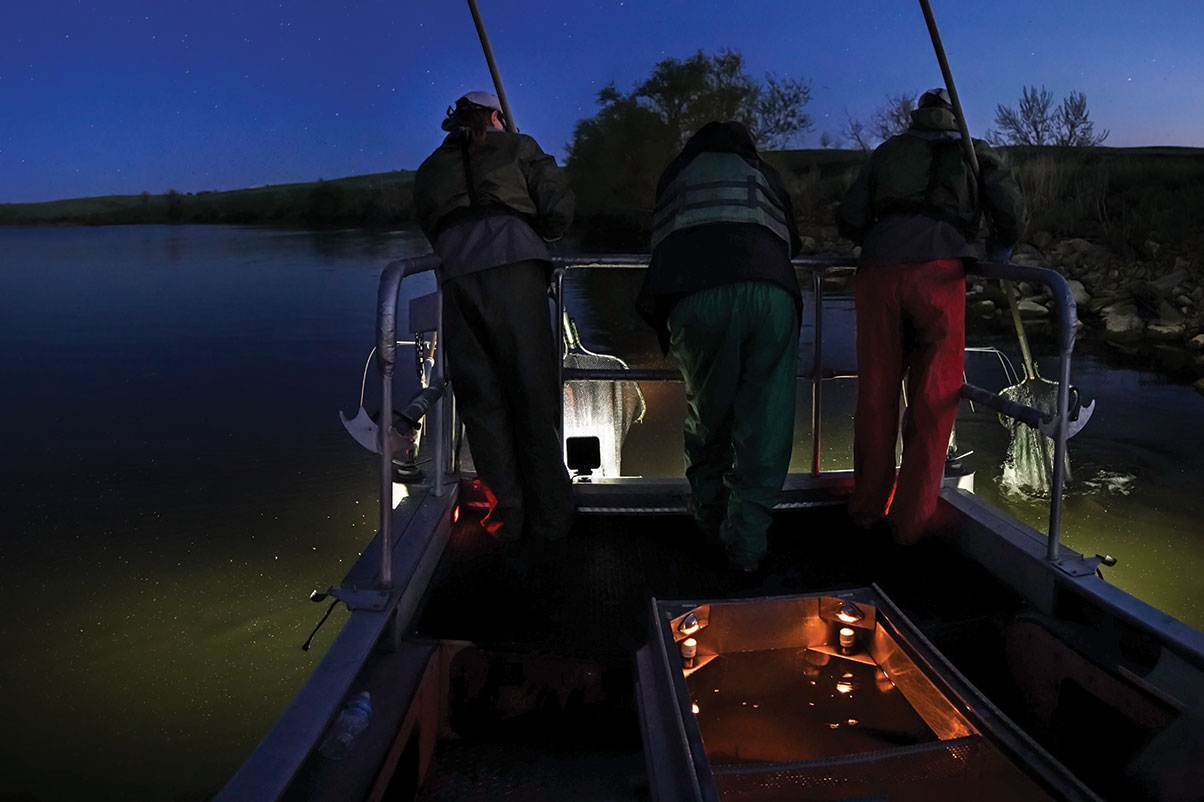 An onboard generator produces electricity that runs to the front of the boat. The electrical field produced goes down about 6 feet into the water. Fish are attracted to the electrical field and are temporarily stunned, allowing fisheries personnel to capture them with long-handled dip nets. 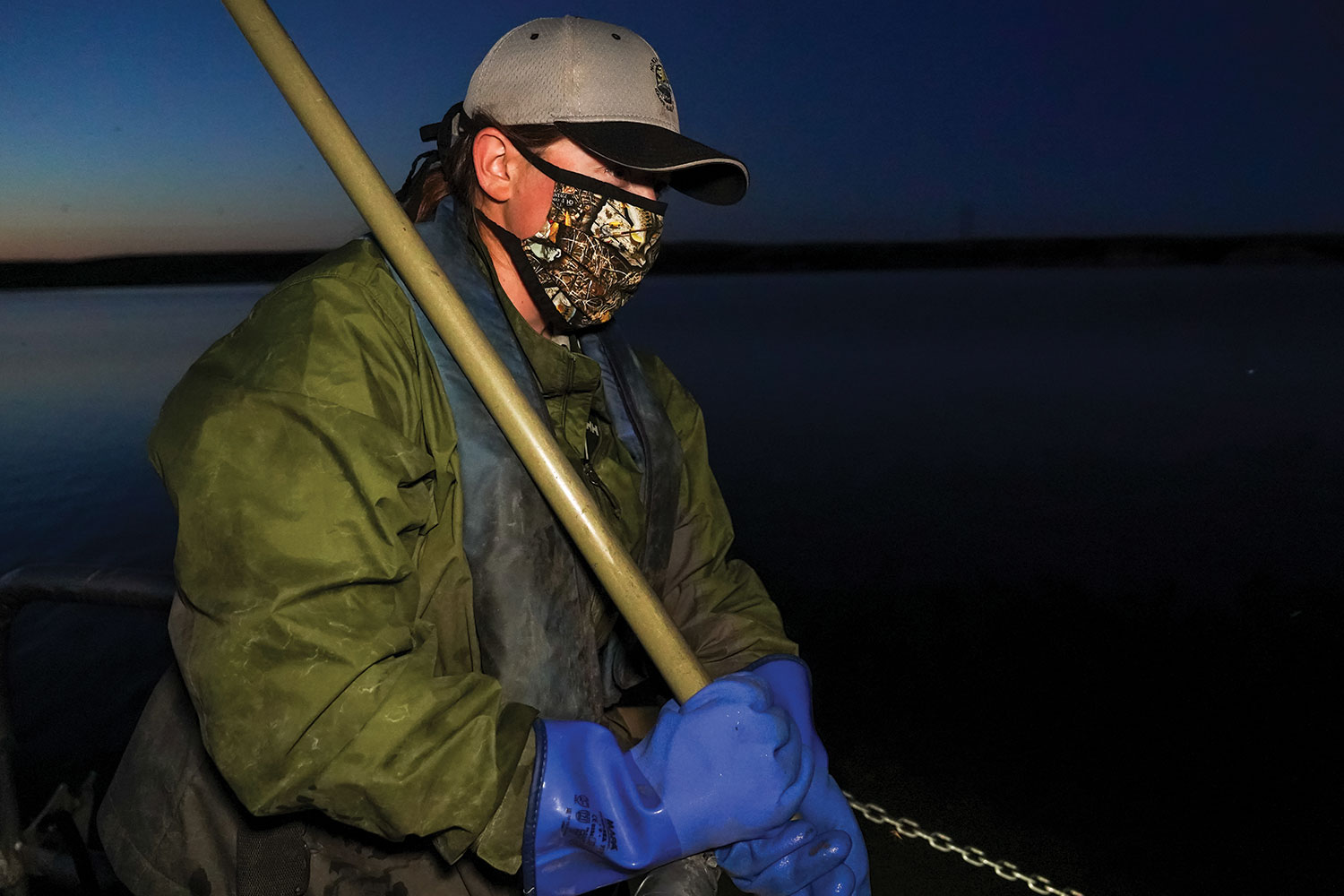 The benefit of electrofishing for largemouth bass at night is that the fish have a natural tendency to move into shallower water under the cover of darkness. 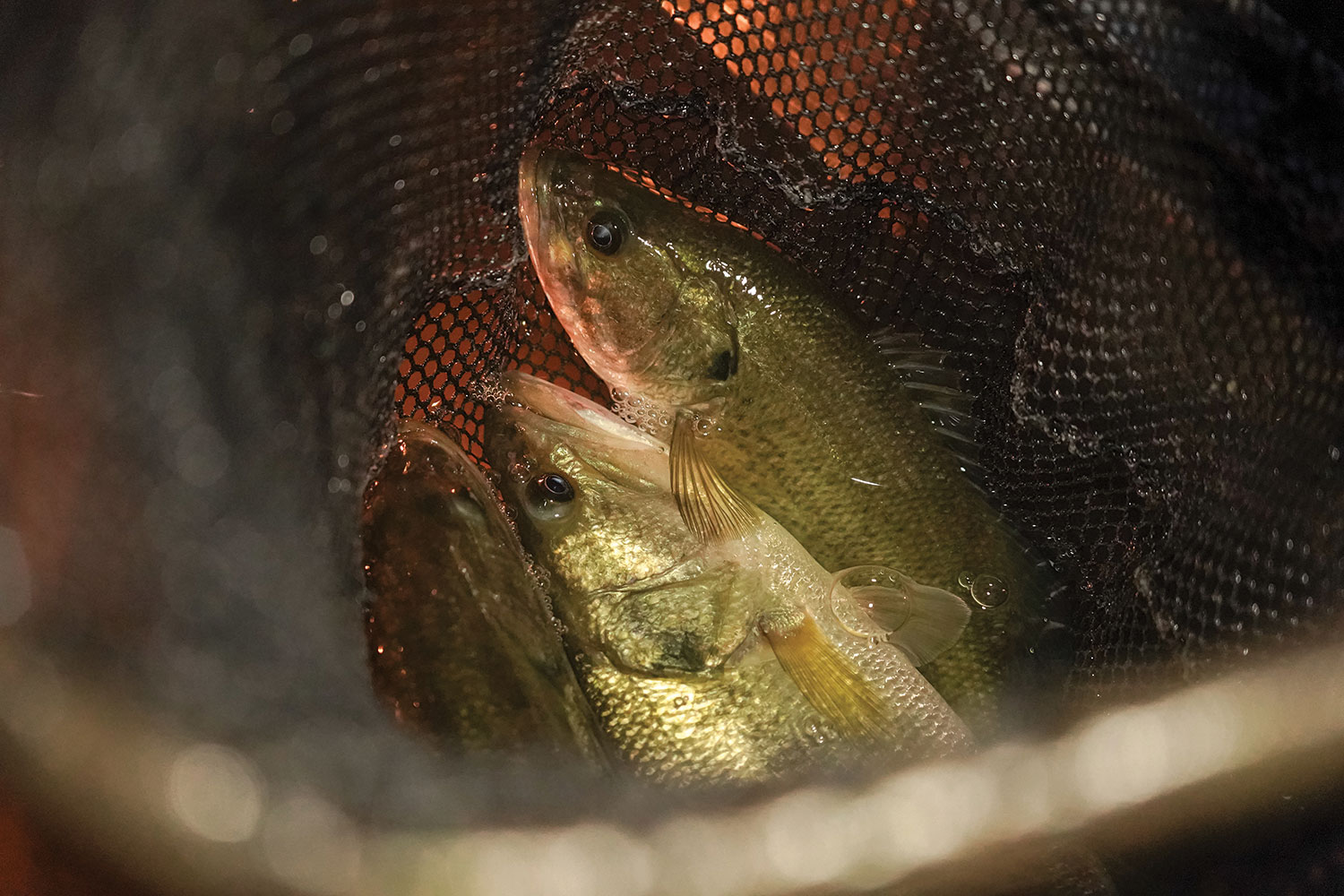 On this particular night in late May, Department fisheries personnel collected, weighed, measured and released more than 60 largemouth bass. What biologists like to see in the collection of fish is a good range in the sizes of fish sampled, plus a sampling of younger fish that will fuel the fishery for seasons to come. 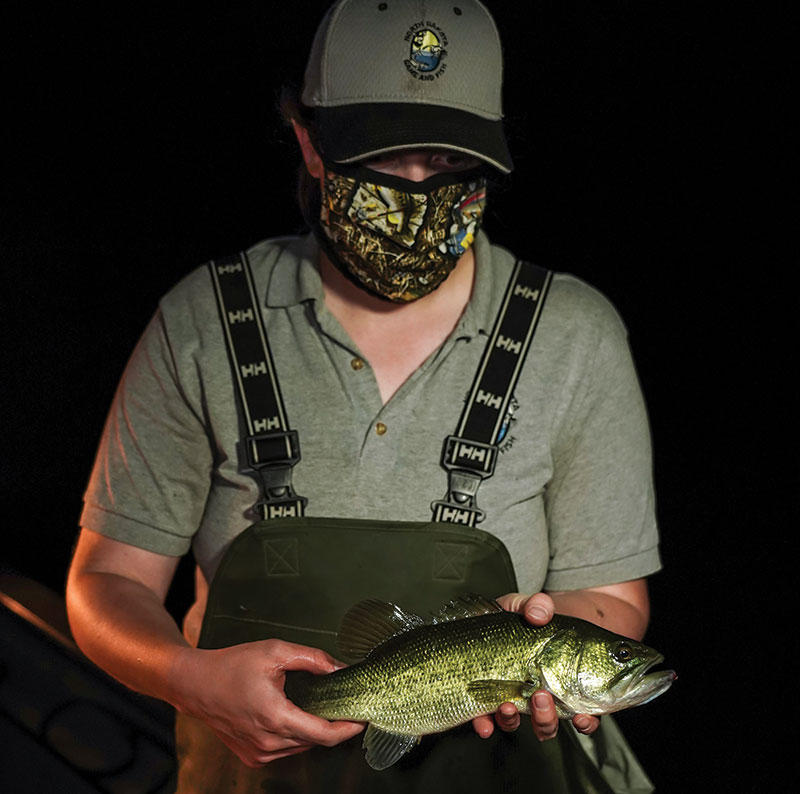 Another benefit for fisheries personnel in electrofishing at night is that those fish stunned in the electrical field are easier to see thanks to boat-mounted lights shining on the water. It’s harder to see, by comparison, during daylight hours because of the sun reflecting off the water, biologists say. 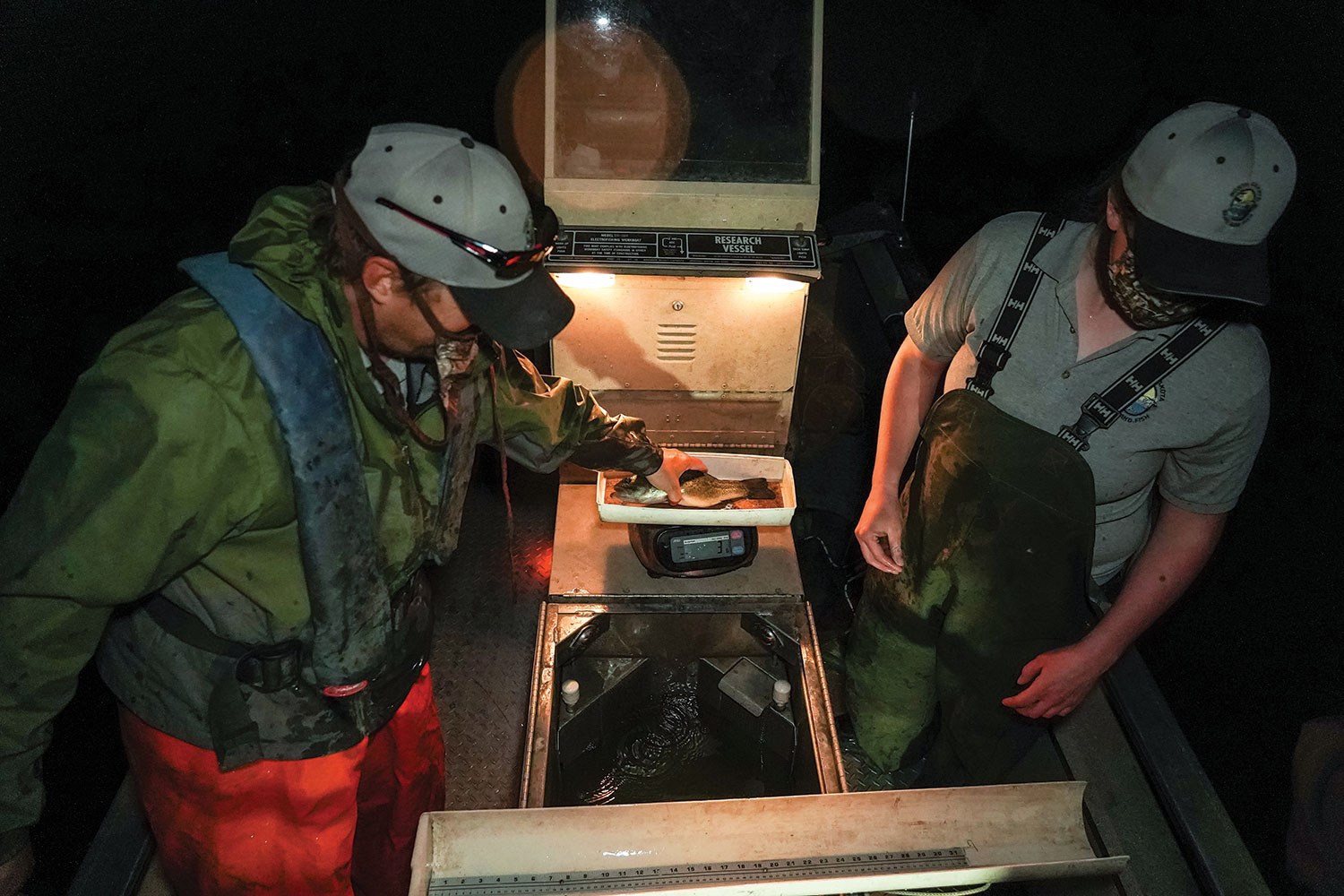 Fisheries biologists weigh and measure bass in an effort to monitor the condition of the fish in the lake. If the bass are skinnier this year from a few years prior, for example, fisheries managers may decide to introduce some prey to the fishery for the bass to eat. 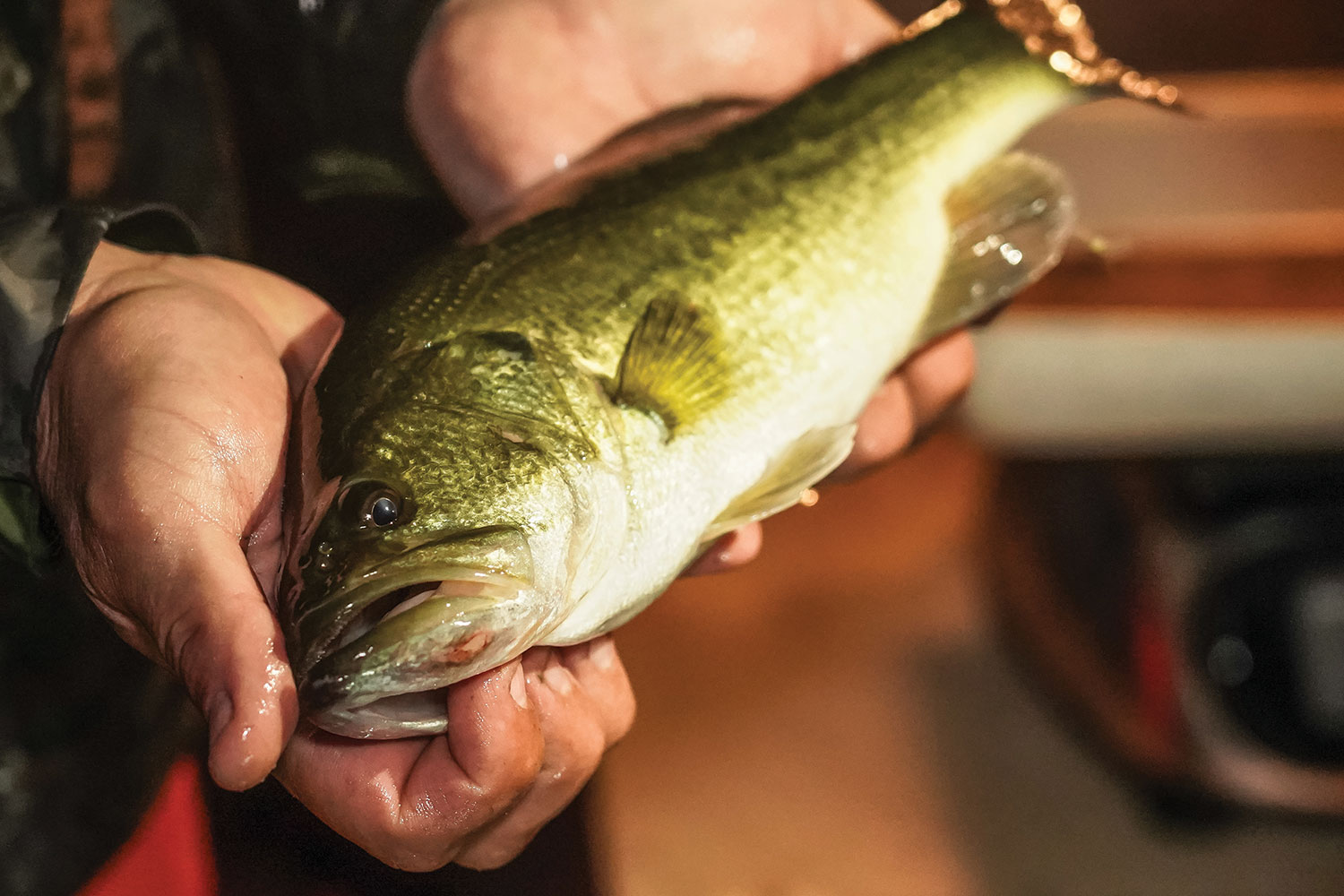 Fisheries biologists are also interested in the number of bass they sample in the two 30-minute segments they are shocking fish. They compare this number to past years to see if the largemouth population is up or down in the lake.
Return to North Dakota Outdoors June 2020 Edition