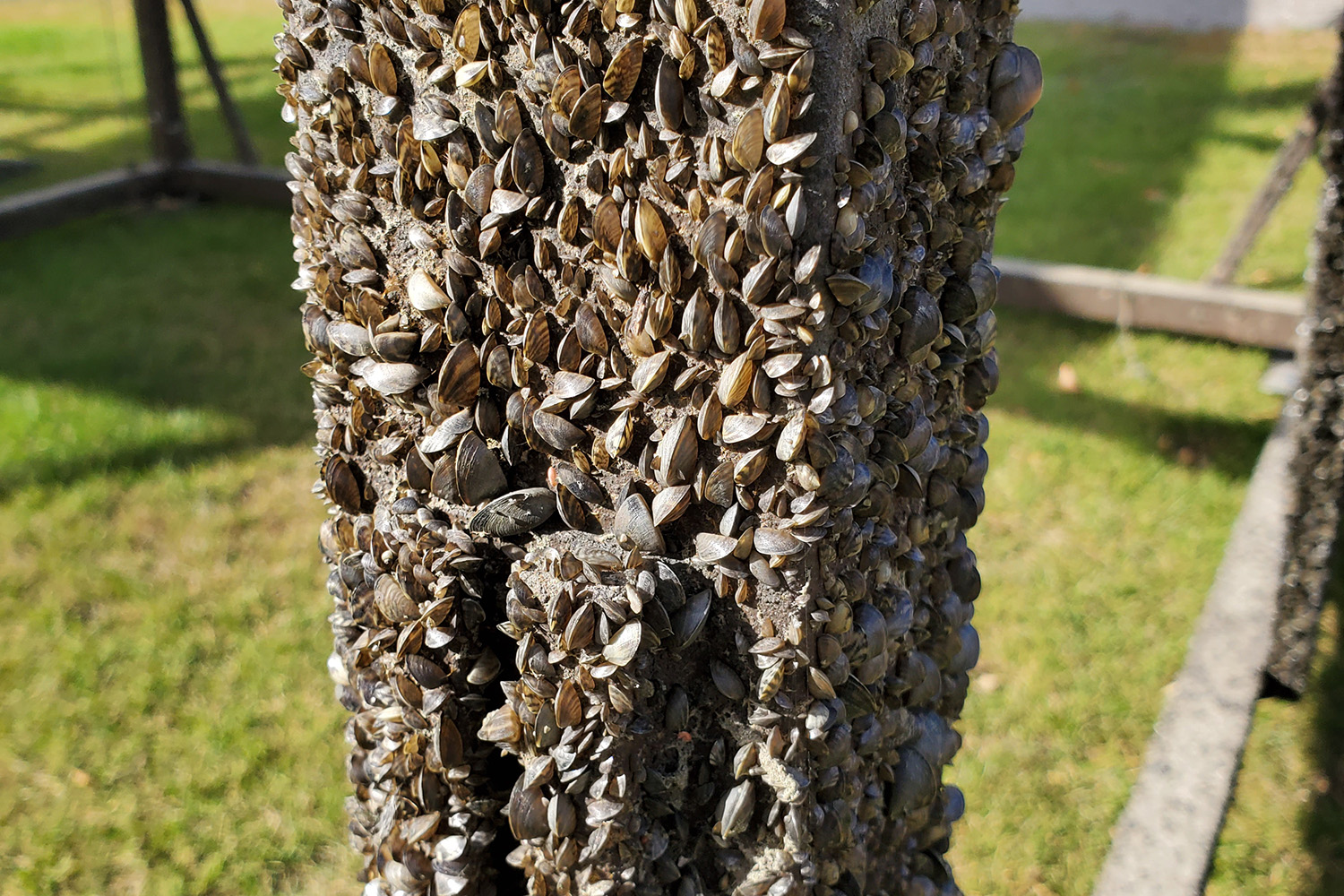 Zebra mussels cover a portion of a boat lift pulled from Lake Ashtabula in fall 2019.

Q: What are the Game and Fish Department’s priorities for aquatic nuisance species this summer?

A: As it is every summer, public awareness about ANS, and actions that prevent their spread, is the top priority. The Department releases ANS education material through a variety of channels and we have many close partners who contribute to these efforts. Boaters should see an increased inspection presence at many of our larger water bodies this year. ANS staff will stay busy this summer, sampling well over 100 different water bodies for the presence of zebra mussels. The Department will monitor Lake Ashtabula to obtain biological information about zebra mussels and document ecological changes in the lake because of their presence. Other ANS priorities this summer include public ANS presentations, inspection presence on Ashtabula, aquatic vegetation sampling, Asian carp monitoring, fish hatchery sampling, aquatic equipment inspections, bait import inspections, crayfish surveys, and ANS enforcement checks.

Q: During the 2019 legislative session, lawmakers created an ANS fund to assist in the ongoing monitoring efforts of aquatic nuisance species around the state. How will these funds be used? Also, does increased funding help in some way with enforcement of ANS laws?

A: The increase in resources will allow the Department to expand its existing ANS program, focusing on education, inspection and monitoring. The Department hired an ANS biologist and added additional seasonal watercraft inspector positions. Funds allow for the purchase of essential sampling and prevention equipment, as well as give the Department the ability to rapidly respond to new ANS infestations. Other anticipated ANS projects include applied research, such as crayfish surveys, ANS risk assessments, and a variety of potential zebra mussel projects.

The new funding from the 2019 ANS legislation also allowed the Department to hire a new warden position. This position will not deal solely in ANS prevention, but rather, all warden staff across the state will spend additional time on ANS matters. Enforcement efforts will focus on conducting more ANS roadside and normal routine checks.

Q: Under the new legislation, there are now added fees for most watercraft that use North Dakota waters. Who is affected by these new fees?

However, all watercraft not licensed in this state and that operate on North Dakota waters, must obtain a valid, nonrefundable aquatic nuisance species sticker. The sticker is $15 per calendar year and needs to be placed on the starboard side of the watercraft within 6 inches of the registration number and decal. Stickers take about 5 business days to receive. A receipt from when the sticker was purchased is valid documentation until the sticker arrives in the mail.

Q: Tell us about the ANS inspection program. What are we learning?

A: Every summer the Game and Fish Department hires and trains seasonal watercraft inspectors. The goal of every inspection is to educate boat owners on the importance of cleaning, draining and drying watercraft, and recreational water equipment. Inspectors survey boat owners and are trained to look for vegetation, mud, animals and residual water that may be left on watercraft after recreation. The information collected from these surveys helps the Department to identify potential ANS risks and aids staff in making important science-based management and prevention decisions.

The good news is that of the 1,063 watercraft inspections in 2019 surveys, 97% of boaters were familiar with North Dakota’s laws and regulations. Only 3% of boaters surveyed had attached vegetation on their watercraft or trailer, and only 1% had residual standing water. Most boaters (74%) took steps to clean their boats after every launch. While these numbers sound great, in many cases it only takes one incident for an aquatic nuisance species to become established in a new waterbody. Approximately 8% of all boaters surveyed had previously recreated in a waterbody with ANS before being surveyed at a waterbody with no known aquatic nuisance species. The risk is out there, so everyone must be diligent in cleaning, draining, and drying all watercraft and equipment. 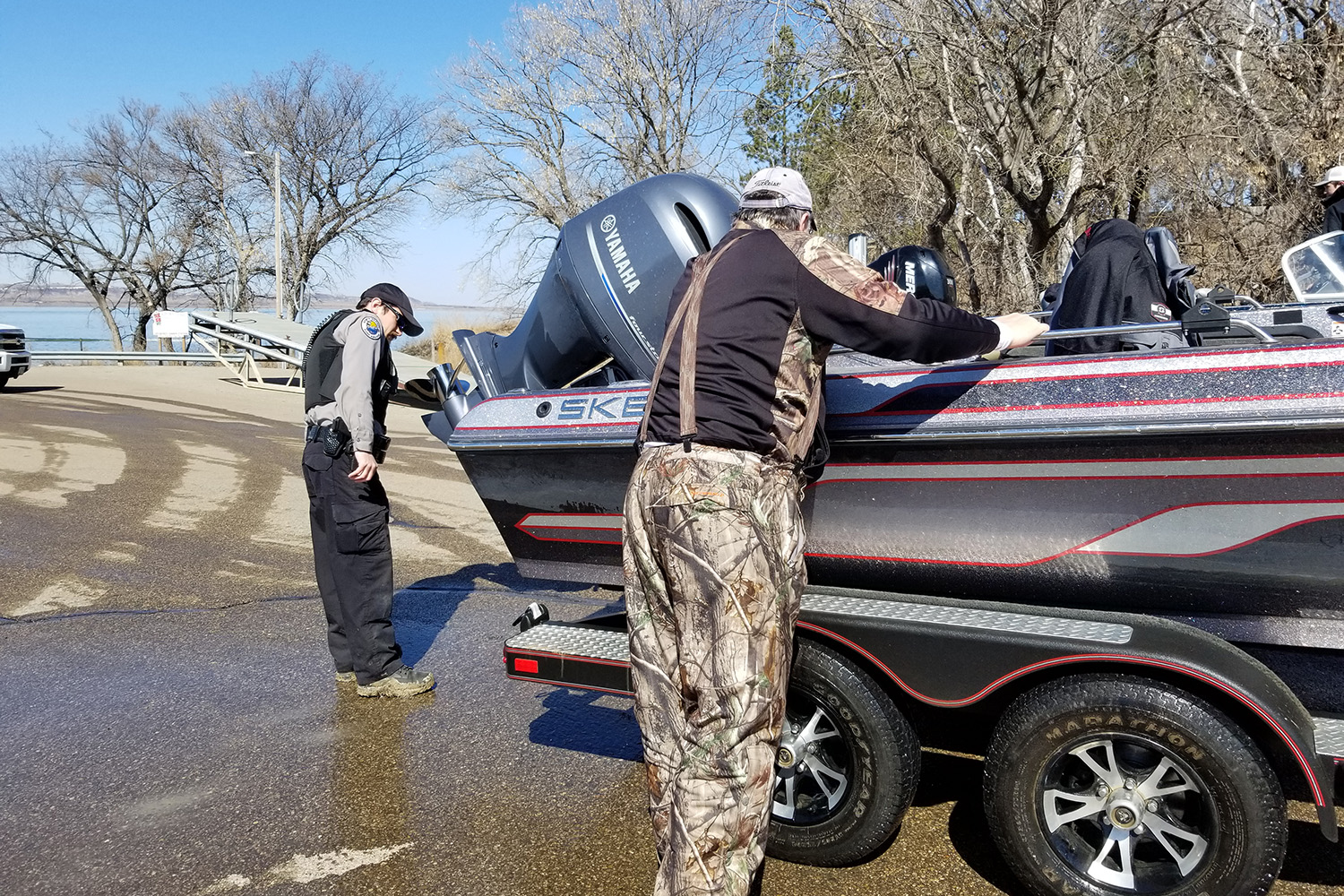 Jerad Bluem, Game and Fish Department warden, inspects an angler’s boat for aquatic nuisance species at a boat ramp on the Missouri River System this spring.

Q: While we don’t think about common carp as aquatic nuisance species, are these fish becoming a bigger issue as high water connects drainages and natural lakes?

A: The current wet cycle in North Dakota has created many new thriving fisheries, but it also presents fishery managers with a variety of problems. The increased connectivity between water bodies allows for the natural movement of fish from drainages into natural lakes. Spring runoff acts as a highway for fish to travel to new water bodies, and common carp take full advantage of this opportunity. It is engrained in carp DNA, as well as many other fish species, to follow running water to its source, to look for viable spawning habitat and food resources.

Fortunately, the Game and Fish Department works with both public and private entities to identify points of water connectivity and then set barriers to prevent their upward movement. Game and Fish staff have created earth berms and stock dams to prevent carp from getting into Devils, Alkaline and Rice lakes. Temporary block net barriers are placed yearly at various district lakes when a more permanent structure is not feasible.

A: Public awareness is key to preventing the spread of zebra mussels. Access points along Lake Ashtabula and the Sheyenne River are signed to identify the waters as having established zebra mussel populations. Watercraft inspectors will be present during the zebra mussel reproductive season, to inspect vessels for mussels and educate watercraft users on zebra mussel biology, ANS regulations and decontamination options. An additional ANS regulation went into effect for both Lake Ashtabula and the Sheyenne River: Anglers may not transport live bait in water away from Lake Ashtabula or the Sheyenne River downstream of Ashtabula. All water must be drained from bait buckets as anglers leave the shore or remove their boat from the water. Anglers must properly dispose of unused bait away from the river, as dumping bait in the water or onshore is illegal.

On a similar note, law enforcement will have additional presence in the area to ensure ANS regulations are followed. The Game and Fish Department monitors zebra mussels in a variety of ways. Plankton tow nets are used monthly to collect zebra mussel veligers from infested waterbodies. The data collected from these surveys allows the Department to determine the relative timing of spawning events, identify newly colonized areas, and helps with determining risk assessments associated with residual water. Settlement samplers will be placed this coming season to monitor the timing of settlement and growth. Zooplankton, water quality data, and benthic macroinvertebrate data will be collected to track possible changes in the ecosystem.

Zebra mussels are new to North Dakota, so the data collected from these initial waters, will help the Department better understand zebra mussel biology and ecological implications in state waters. Unfortunately, once zebra mussels are established in a waterbody, they are very costly and nearly impossible to eradicate. In a large reservoir like Lake Ashtabula, eradication is currently not possible. The best way to combat these species is to stop their spread through education and prevention practices. 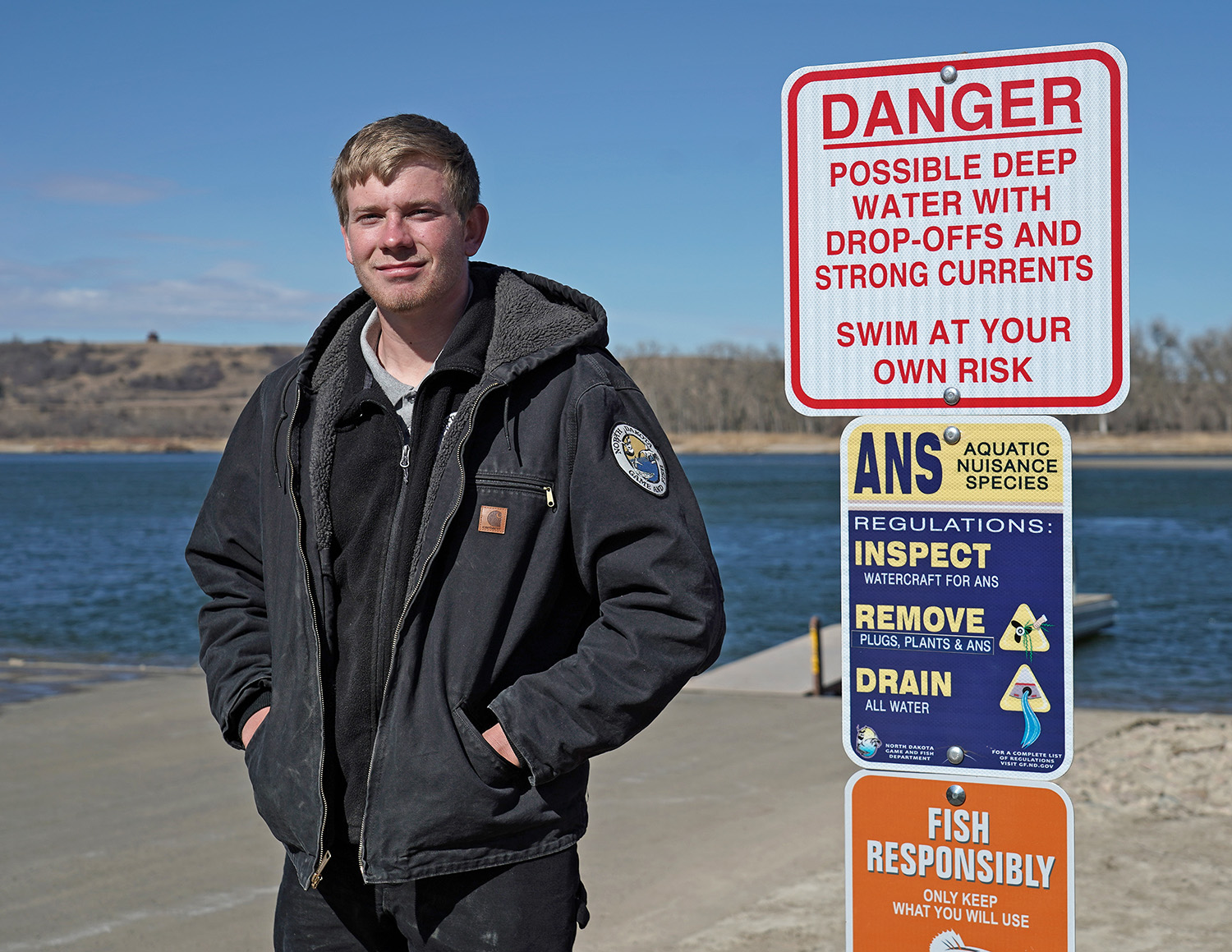 Q: Much is made about zebra mussels and the problems they can cause. What is the fallout for a body of water with zebra mussels?

A: It is hard to say the exact effects zebra mussels will cause at any given waterbody because of the great variability that can exist in a lake’s water chemistry, nutrient input, aquatic organisms and population levels of mussels. Some common impacts observed in lakes are clearer water and a shift of nutrients to the lake bottom, which causes an increase in plant growth and benthic macroinvertebrates. Some lakes see an increase in the severity of harmful algae blooms because zebra mussels selectively feed against them. The changes in fish abundance and growth and water quality can also be highly variable. Zebra mussels cause major problems to infrastructure, they can clog water intakes, foul boating equipment and damage property.

Q: Other than zebra mussels, what other invasive species are a concern in North Dakota? And if there are some, where are they found?

A: We are fortunate in North Dakota to have low numbers of aquatic invasive species compared to many other areas in the country. Other than zebra mussels, North Dakota has just a few aquatic invasive plants and animals including curly leaf pondweed, Eurasian watermilfoil, bighead, silver and common carp. Curley leaf pondweed can be found throughout the Missouri River System, Lake Metigoshe, the Sheyenne River in Barnes County, and a few small reservoirs. In the last five years, Eurasian watermilfoil has only been documented in the Sheyenne River in Barnes County. Bighead and silver carp are only found in the James River, while common carp are widespread and are found in many waters across the state. Any ANS has the potential to cause harm to the aquatic ecosystem.

Q: What can water recreationists do to eliminate the spread and introduction of ANS in North Dakota?

A: All water recreationists, whether you are an angler, hunter, water sports enthusiast, or a pleasure boater, play a part in preventing the spread of aquatic nuisance species. It is important to clean, drain and dry all watercraft and water recreational equipment. Many boat owners practice these steps between every launch. However, other common items such as anchors, watersports equipment, decoys, canoes and kayaks are all possible vectors that can also spread aquatic nuisance species. Large equipment, such as boat lifts, docks and barges can be high risks for spreading ANS, especially if they are moved from one lake to another. It is important to remove any vegetation, mud, or residual water left on equipment, because it may harbor an aquatic nuisance species. Cleaning gear with hot water, (140-degree F) for 10 seconds, between recreational trips, can eliminate the risk of spreading ANS.

Before recreating on any water, everyone should take a few minutes to become familiar with North Dakota’s aquatic nuisance species regulations, so we all can enjoy North Dakota’s recreation opportunities for many years to come.