It’s early April. Rivers and streams fueled by snowmelt are hurrying downhill. Ice has pulled away from shorelines on many lakes, warming shallow waters that have been locked up for months.

This is all normal. Happens every year at roughly this time. Yet, beyond that, things are turned upside down. Because of the coronavirus pandemic, much of life as we knew it just weeks ago is unrecognizable. Social distancing is encouraged. Groups of more than 10 are discouraged. 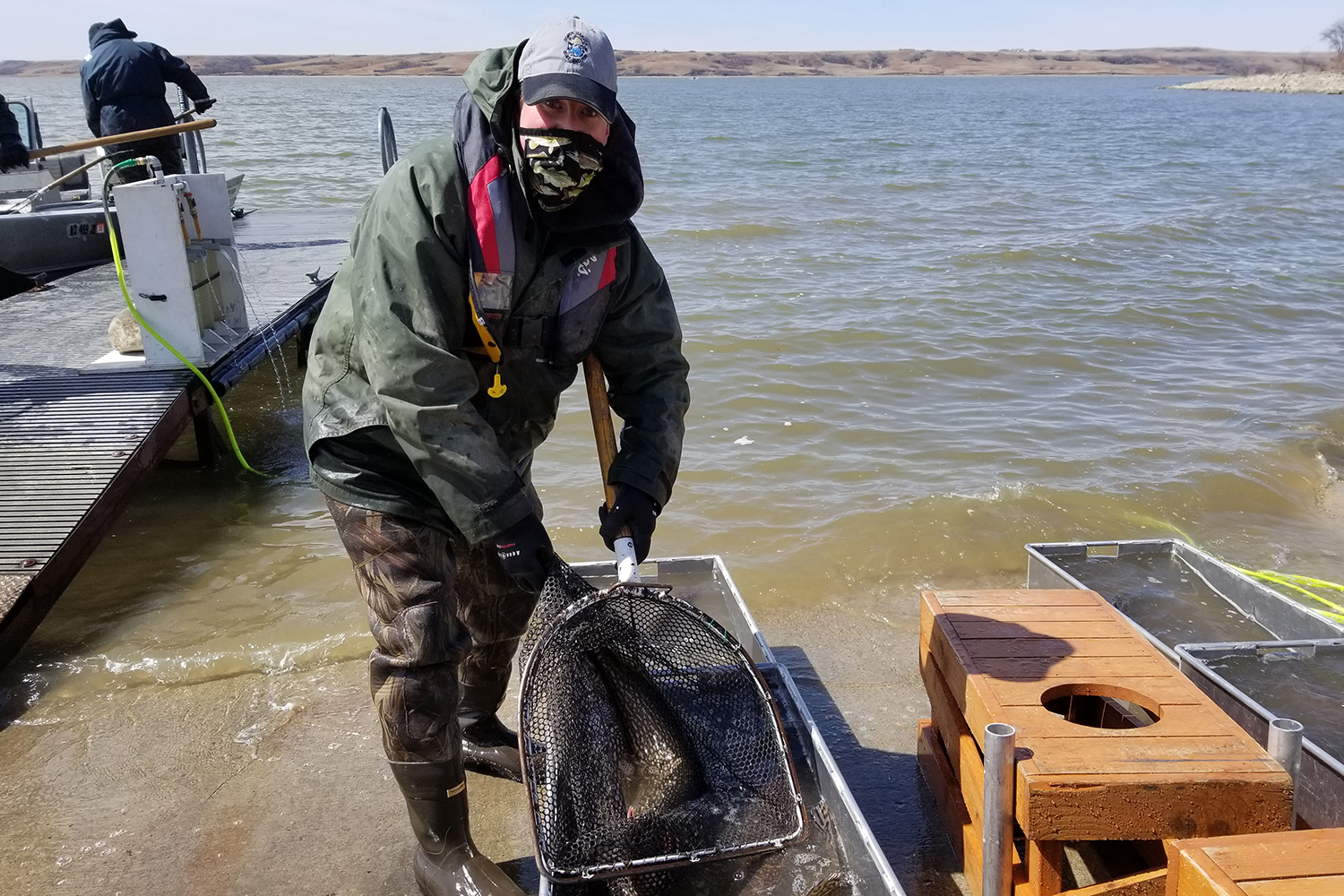 At this time of year in the fisheries world, the list of jobs that need to get done is long. These hands-on tasks, from trapping and transporting adult yellow perch, to spawning northern pike and walleye, help to fuel the quality fishing opportunities for years to come that North Dakota anglers appreciate.

“Given the reality of the COVID virus out there, a lot of planning has gone into place and we’ll be doing things differently this spring,” Power said.

For instance, spawning and all other crews will travel separately, driving singly in work vehicles from offices to lakes. Fisheries crew members will also wear masks when it’s inevitable that they won’t be able to stay 6 feet away from their colleagues, and will be separated by Plexiglas while sitting on benches and relieving the fish of eggs and milt.

“We’re taking precautions because there is just no way around it … in some of the work, people will be in that 6-foot barrier,” Power said. “So, we have to be extra cautious in what we are doing.”

Jerry Weigel, Department production/development section supervisor, said one built in preventative measure is that the Department’s small fisheries staff and even smaller work crews are well under the crowd guidelines.

“During a normal year we typically only have four to six staff on a spawning crew and even fewer for trap and relocation efforts,” Weigel said. “Shipping fish from the hatchery is conducted with three or fewer in a normal year. Those small groups give comfort that we can conduct many of our normal activities in a safe manner.”

Yet, some spring activities have been cancelled until next year, including tagging chinook salmon smolts in Garrison Dam National Fish Hatchery, something the agency has done for 30-plus years. Also, the Department’s paddlefish tagging program near the confluence of the Missouri and Yellowstone rivers will be put on hold. 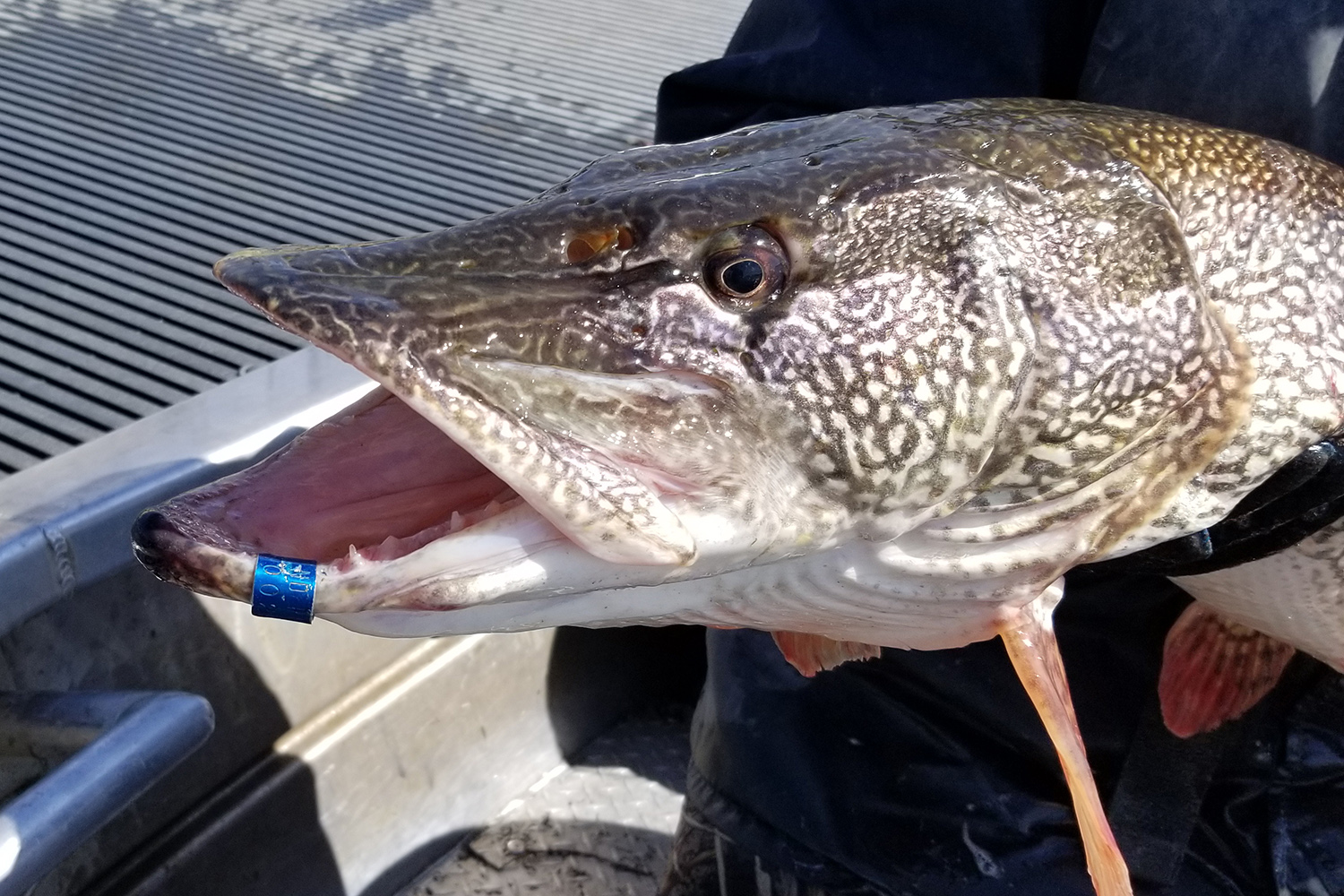 Trophy pike netted during spawning were fitted with metal tags as part of an ongoing study on these big fish.

“We’ve tagged paddlefish for years and we have a lot of information, so doing it this spring is not absolutely critical,” Power said. “We don’t need five guys together in a boat all day long. That’s probably not the best thing to do.”

Game and Fish Department fisheries crews ignore their own clocks in spring, and instead operate on the impulses of fish being encouraged to spawn based on photoperiod and water temperatures.

Weigel said spring offers the only window to successfully net pike and walleye that are concentrated, and relieve them of their eggs.

“We are handling fish a lot during spawning, but because the water temperatures are colder in spring, we have almost zero mortality to the fish,” he said. “The majority of the fish are released alive back into the water when we’re done with them.”

So far, spring 2020 is like most years, kicking off with the northern pike spawn in early to mid-April. What follows is the walleye spawn on Lake Sakakawea in late April or early May.

Weigel said the plan this year is to produce 10 million walleye fingerlings at the federal hatcheries. Missing spring spawning, as both fisheries biologists and anglers can attest, would be an unwelcome event as most (but not all) waters of the state rely on stocking efforts.

“If you don’t have walleye production, then the 250 lakes or so that we plan on stocking this year wouldn’t get fish. Our stocking helps level out the valleys,” Weigel said.

In the short term, Power said, not stocking North Dakota’s waters with, say, walleye fingerlings, doesn’t seem like that big of a deal.

“But in the long-term, many of the stocked lakes only have a few decent year-classes of fish, thus entirely missing one year of stocking may be noticed by anglers a couple years down the road.” Power said. “More importantly, totally missing a year-class of walleye complicates our fisheries manager’s goals of finding that right balance between predators (walleye) and prey (fathead minnows) so that anglers can catch fish. At times, it can be a fine line between too much and too little forage.”

In terms of trapping and transporting adult yellow perch heavy with eggs from one water to another, this spring would have been a hard one for fisheries biologists to abandon. 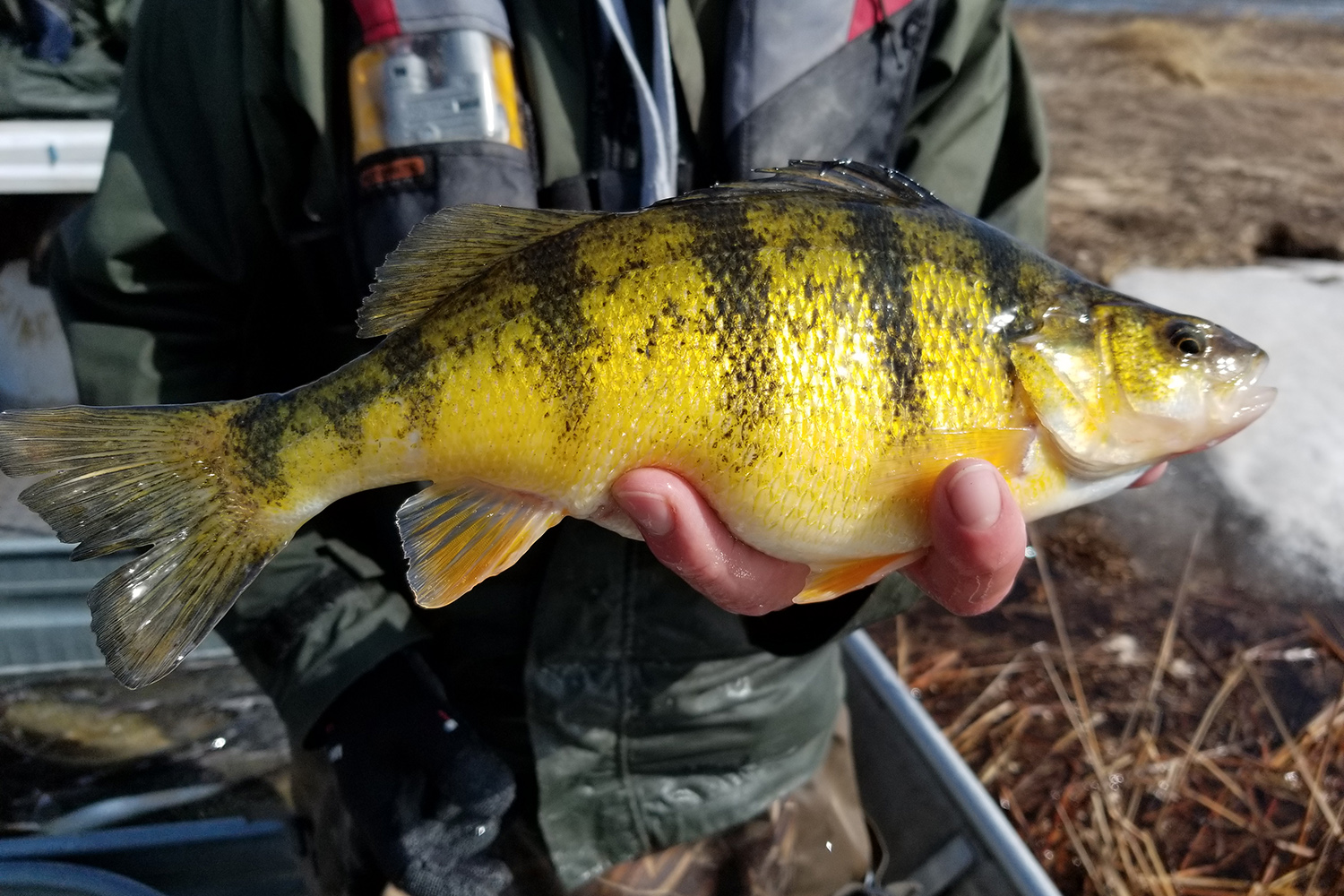 On the long list of spring duties for fisheries crews was trapping yellow perch from a handful of lakes in the state that have high perch populations. These fish, still heavy with eggs, were then transported to other waters where they will spawn and create fishing opportunities for anglers down the road.

“We probably lost on average 5 feet of water in these lakes,” Power said. “It’s been especially hard on perch … there just hasn’t been any natural reproduction for a number of years.”

While conditions are good for perch to reproduce naturally on their own, Power said there are some new lakes, or maybe some that winterkilled in the last couple of years, that need a jumpstart and will receive 100-200 pounds of pre-spawn yellow perch each.

“There are a handful of lakes around the state that have high perch populations, not necessarily big perch, but an overabundance, so by taking out some adults, we’re not impacting those fisheries at all,” Weigel said. “We take them out in early spring while they still have their eggs and then transport them to other lakes so they can spawn naturally.”

Power said fisheries development crews will also continue their yearly spring tasks of readying boat ramps and other facilities for anglers around the state, taking similar precautions as other fisheries crews, such as driving separately.

“We may not be as efficient under the circumstances as we normally would be, but we think we can do what needs to be done without causing any problems to our personnel or the public,” Power said.

Conversely, Power said Game and Fish cancelled the last two or three weeks of a creel survey on Devils Lake, as well as postponed a joint creel survey on the Red River with Minnesota.

“We didn’t think it was good for the creels clerks or anglers to be in close proximity, face to face during interviews,” Power said. “This is one of those prudent steps that need to be taken during times like this.”