Shocking the Shallows for Salmon 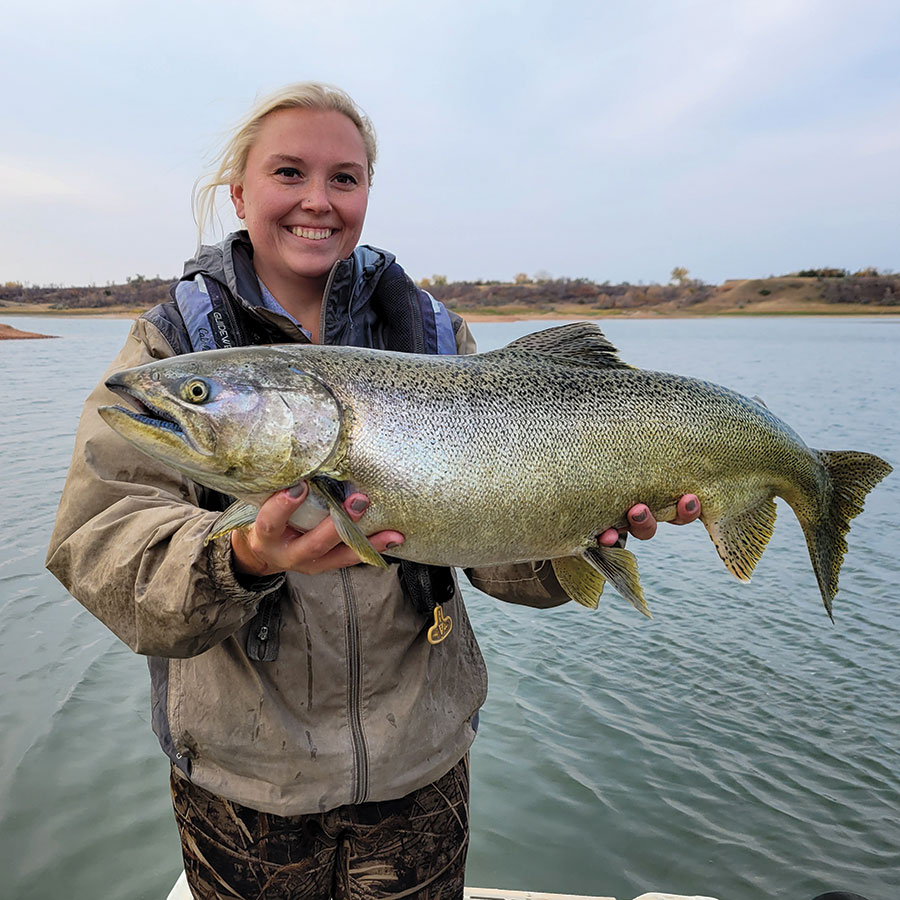 Mattea Bierman, Department fisheries technician, with a mature chinook salmon taken from the shallows of Lake Sakakawea in October while electrofishing (top photo).

Nothing, certainly not the weather, interrupts the push of chinook salmon returning to their biological beginnings in North Dakota.

In October 2019, with diminishing daylight hours triggering salmon into this single-minded mission, North Dakota Game and Fish Department fisheries biologists leaned into an early taste of winter in their pursuit of catching and relieving the sexually mature fish of their milt and eggs.

“Last year at this time, we were basically electrofishing in a blizzard … and the year before that, there was snow on the ground,” said Russ Kinzler, Game and Fish Department fisheries biologist. “While it’s been pretty windy so far this fall, we’ll take the wind when it’s warm out.”

The only constant is the salmon, introduced into Lake Sakakawea 40-plus years ago, that will hit the peak of the spawn sometime in mid-October and fisheries biologists will be there to meet them.

In 2019, fisheries biologists took the bulk of the 1.4 million chinook salmon eggs in the Missouri River below Garrison Dam.

“Last year the U.S. Army Corps of Engineers were evacuating surplus water from Sakakawea, so they had the spillway gates open for the first time in the fall,” Kinzler said. “The salmon just got pulled out of the lake and ended up in the river and we were able to catch them down there. It worked out, but it was very different from what we would consider normal.”

Normal, from 1987 to 2004, was the use of a manmade salmon ladder placed in Rodeo Bay at Lake Sakakawea State Park where the salmon would collect in fall in search of a stream in which to spawn. Yet, the only running water found was falling down the ladder.

Setup, takedown and the round-the-clock monitoring of the ladder required each fall was a lot of work, and the number of fish that ran up it was erratic and didn’t justify the effort.

“You had to monitor the ladder every day, you had to fuel it up every day and there were oil changes with the pump,” Kinzler said. “Part of the reason we quit using the ladder was the price of fuel got too high and we were putting in 50 gallons of fuel every day at $4 per gallon and it just wasn’t paying off.” 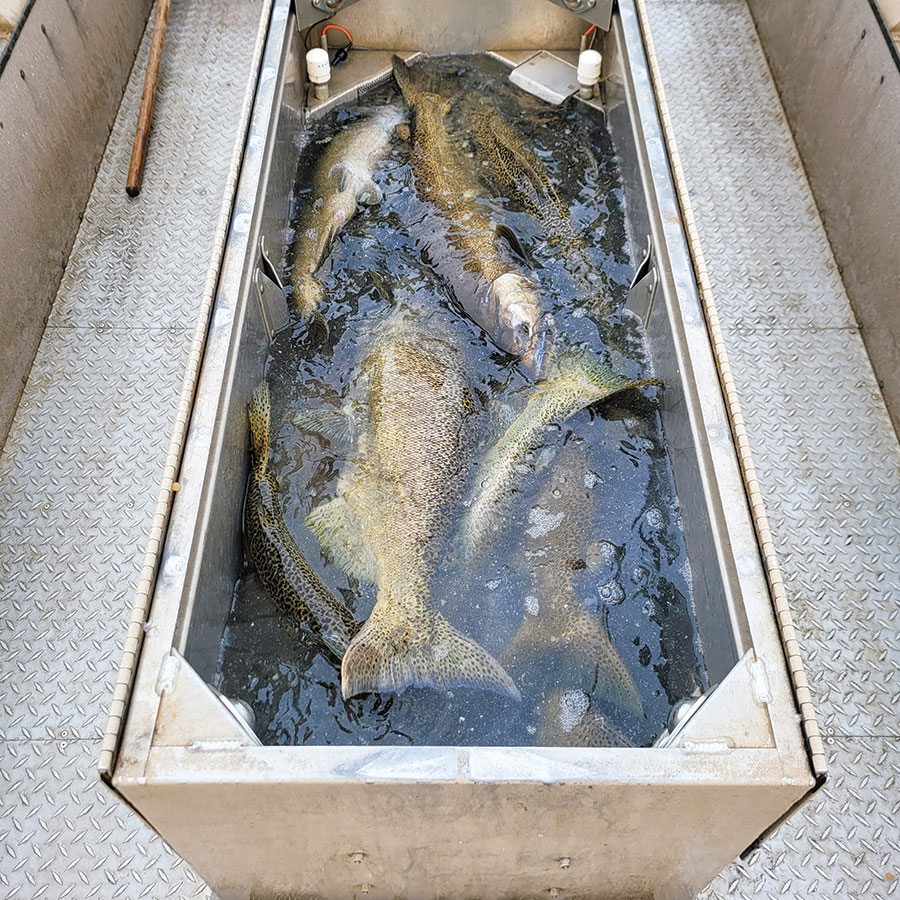 Since salmon cannot naturally reproduce in North Dakota, Game and Fish personnel capture salmon and transport them to the hatchery.

Today, the majority of salmon needed to meet yearly egg goals are taken by electrofishing. Fish are attracted to the electrical field produced by an onboard generator and are temporarily stunned and captured by fisheries personnel armed with long-handled dip nets.

“This year, we’re back to doing what we typically do and most of the fish are coming from Lake Sakakawea above the dam in the back of bays and along the dam itself,” Kinzler said. “They tend to congregate around the intake structure.”

Like last year, the goal in 2020 is 1.4 million salmon eggs. On October 2, Kinzler reported that Department fisheries biologists and Garrison Dam National Fish Hatchery personnel, collected their first batch of eggs, nearly 181,000 from 55 females. On October 9, they collected 398,000 eggs from 104 female salmon, putting their total at that point at just over 1.1 million eggs. Just days later, fisheries crews completed their annual spawning operation with 2.1 million eggs.

It takes a lot of eggs to meet the goal of eventually stocking 400,000 salmon young raised in the hatchery into Lake Sakakawea next spring.

“When you think about it, we’re in North Dakota and salmon aren’t native to North Dakota, so you can’t expect that we’re going to have high success like you do in ocean fish spawning in streams,” Kinzler said. “Essentially, our long-term average is that we’ll lose about 50% of the eggs from fertilization to when you can start seeing eyes on the eggs, which we call eye-up. While it varies from year to year, in the end we have about 30% survival from spawn to stock.”

When the fish are stocked into Sakakawea, they are about 5 inches long. At that length, fisheries biologists have learned, the young salmon are likely big enough to escape Sakakawea’s goldeye population.

“That’s the one major predator we hope we can get the salmon past,” Kinzler said. “If we can do that, then hopefully a few more survive.”

The majority of salmon biologists shock in the shallows are on average about 2 years old. These mature fish, full of milt and eggs, looked bigger this fall than many of those captured in 2019. 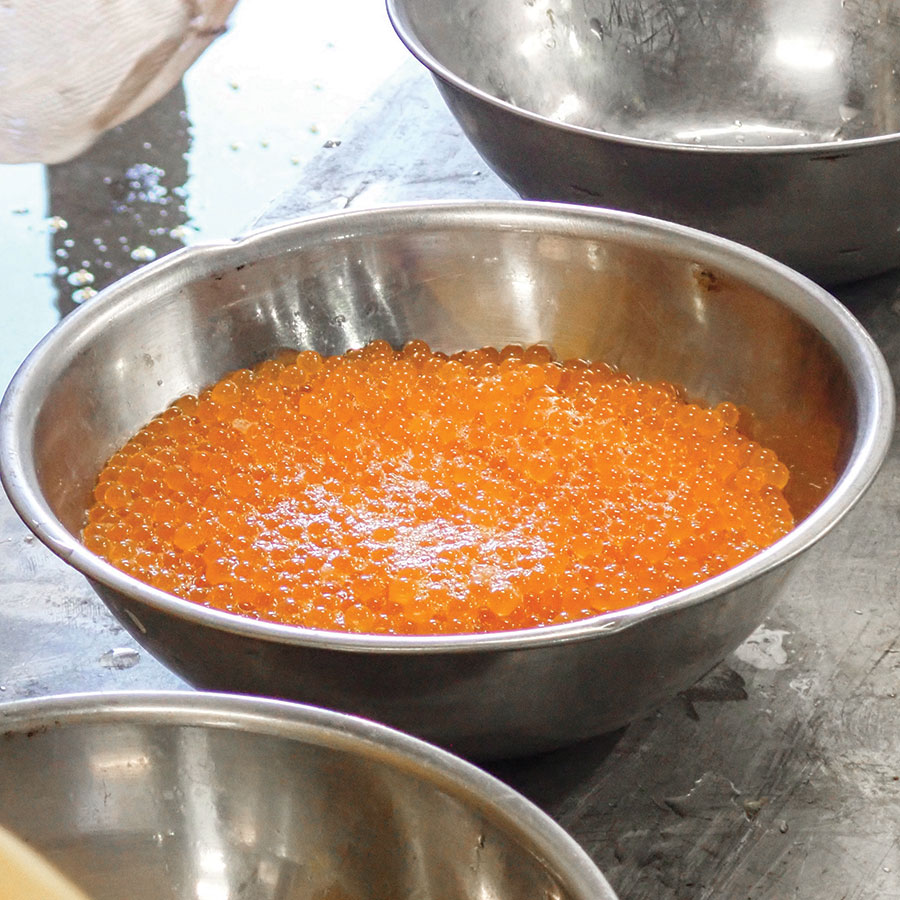 Just a portion of the 2.1 million eggs taken from salmon this fall, of North Dakota’s salmon spawn.

“They look really good this year,” Kinzler said. “The females are about 2 pounds bigger than they were last year and the males are about 1 pound or more than last year. Actually, they look better than the last few years.”

Rainbow smelt are, without argument, the driving force for a healthy chinook salmon population in Lake Sakakawea. Smelt and salmon inhabit the same coldwater habitat and the former are the main food source for the latter.

“If we have a good population of rainbow smelt in Sakakawea, we are generally going to have good numbers of salmon in the lake,” Kinzler said. “And when the rainbow smelt are bigger, we tend to have bigger salmon. The last few years we’ve had a lot of smelt, but they’ve been small, and the salmon reflected that. And this year we’ve noticed that there’s some bigger smelt out there and we have bigger salmon.”

Without this effort to annually pursue chinook salmon in the shallows in fall and raise their bounty in a cooperative effort at the hatchery, these nonnative fish would blink off Lake Sakakawea’s underwater map in short order.

“If we didn’t spawn salmon in Sakakawea in the effort to stock fish in spring, they’d been gone in four years,” Kinzler said.