That’s a long time, 36 years, between dressing in fluorescent orange and centering the crosshairs on a deer. This lengthy pause between now and then wasn’t a planned retreat from something he didn’t enjoy as a teenager. It wasn’t anything like that.

Let’s just say that life got in the way.

“About that time, my parents got a divorce and my dad eventually got a job out of state. He was the one who was always taking us hunting and fishing with him, so when he moved, those hunting trips got to be few and far between,” Meissner, 52, said. “I graduated high school, went off to college and then other priorities just came into play.”

Despite his hiatus from deer hunting, Meissner has been connected to the activity, in a backseat-sort-of-way, during his 26 years as an employee at the North Dakota Game and Fish Department, nearly the last 10 of those as licensing manager. He’s watched an untold number of deer licenses go out the door over the years to those lucky enough to draw a license. 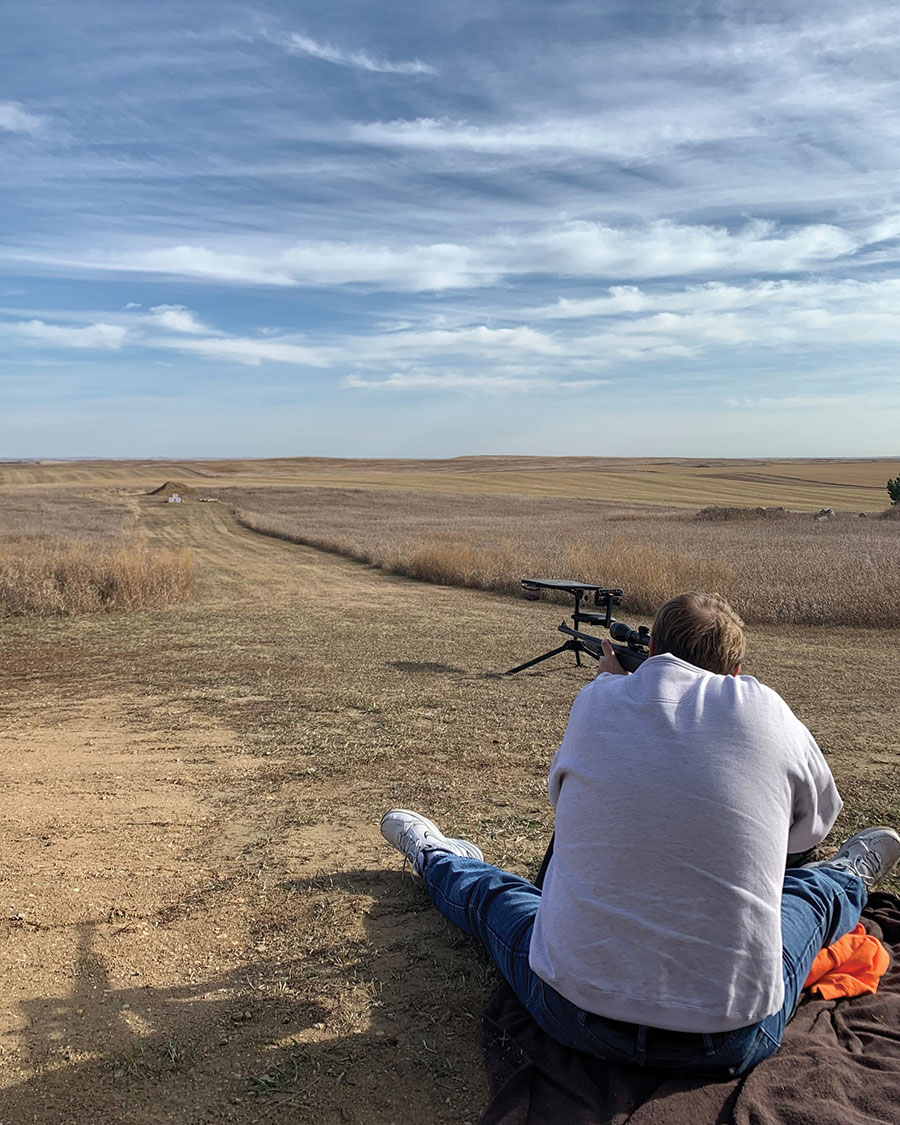 “I was hired originally at Game and Fish as a computer specialist, so much of my job was making sure the computers were running. Eventually, I moved to the licensing section and it became my job to sell licenses and make opportunities available for other people to go hunting,” he said. “And it just never dawned on me that maybe I should start participating myself.”

Enter Brian Schaffer, Game and Fish Department hunter education coordinator, who works down the hall a short walk from Meissner.

Schaffer is one of those people who enjoys sharing the spoils of his hunting and fishing trips – some venison sausage here, some walleye fillets there – with those folks who don’t hunt or fish much, or at all. Meissner was one of the benefactors of his giving.

Eventually, the two went fishing together a couple of times and Schaffer told Meissner that he should tag along in fall, get back to deer hunting.

“Before picking up a leftover doe license after the lottery, Randy asked if he could go hunting with me and it just kind of stemmed from there,” Schaffer said. “We went to the range a few times together just to get back to the basics on the fundamentals of shooting a rifle, firearm safety … a refresher course.”

After nearly four decades, Meissner was snugging a rifle stock neat to his shoulder and pulling the trigger with purpose.

“I wanted to make sure I could hit what I was shooting at … it had been so long since I’d fired any kind of firearm,” Meissner said. “We did some target shooting and I did better than I thought I would, which helped with my confidence and I realized, given the right opportunity, it wasn’t going to be as difficult as I thought it was going to be.”

Maybe the hardest part for Meissner was reaching out to Schaffer, asking for a hand, a mentor who was willing to give up part of his season to reintroduce a onetime deer hunter back into North Dakota’s storied hunting fold.

Schaffer knew it was a difficult ask, but he was ready for it.

“When I was in graduate school, I recognized how lucky I was to have so many mentors in my dad and his close friends growing up … It just kind of hit me one day and when I went home for the holidays and thanked each of them individually for all the time they invested in me,” he said. “And each one of them asked that I do the same, to take somebody else out and share my knowledge with them, spend time with them in the field.

“That’s when I started teaching hunter education and it’s really when I started taking the time every year to try and introduce a few new people to hunting and making that commitment to them,” Schaffer added. “I’ve learned that it’s critical when working with new hunters that you make that commitment to take them for a couple of years to build their confidence and teach them some skills so they can be successful on their own.”

More than one season under a mentor’s watch sounded good to Meissner. 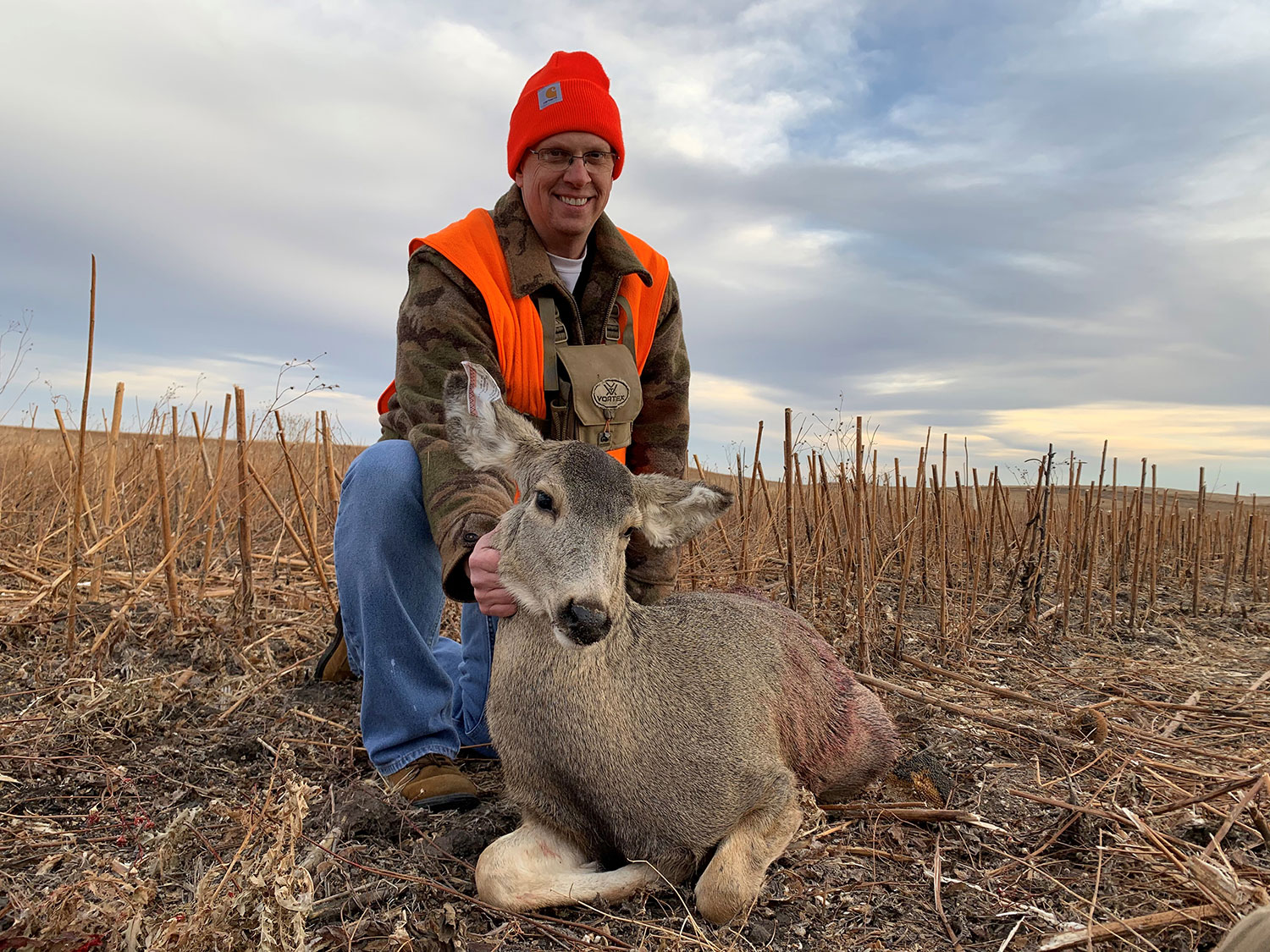 “Well, I don’t think it would be as much fun by myself … I mean, experiences like this are just a lot better when you can share them with somebody,” he said.

It was during their second day in the field, not long after sunrise, when Meissner got a good shot opportunity on a doe and pulled the trigger.

“We spent several minutes watching these deer and since I had an antlerless tag, that was the deer that was in my sights,” Meissner said. “It was just one of those perfect opportunities because the deer stood still and made a really good sight picture.”

Schaffer said it was one of the highlights of his fall.

“I think as hunters we go through different stages and seeing fresh eyes take in the sights, sounds and smells that maybe we sometimes take for granted is an incredible experience,” he said.

Meissner offers this piece of advice for people reactivating their hunting interest as he did in 2020 or starting new: Keep an open mind and ask a lot of questions.

“Being an older person, you kind of get a little intimidated like you’re expected to know all these things because of your age,” he said. “And in

36 years, there’s a lot of things that I forgot, like the whole process of taking the hide off, quartering the deer … I hadn’t been involved in that process in a long time. It was definitely a lot more work than taking the shot.”

Meissner will certainly be better prepared next fall in all aspects of the hunt.

“Well, he could have brought some better snacks … his snack game was a little weak,” joked Schaffer. “But, you know, he did all right.”