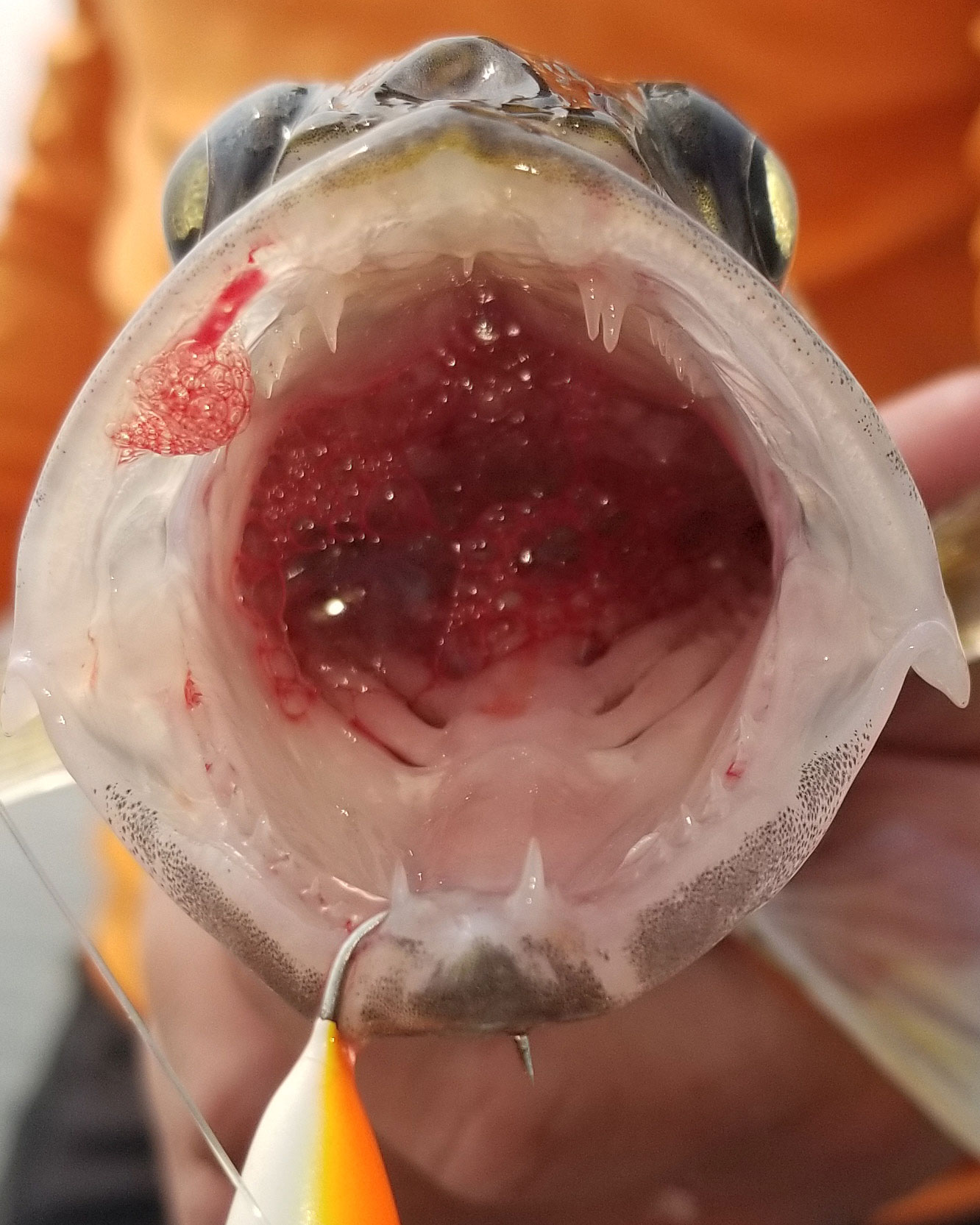 Anglers presume the fish they release survive, but those that suffer trauma from being caught from deep water many times don’t make it.

Conventional thinking suggests that when summer heats up, fishing cools down.

Inevitably, fishing slows down during the “dog days” of summer, when water temperatures on North Dakota’s shallow prairie lakes exceed the preferred temperature range of our cool water sport fish, like walleye, yellow perch or northern pike (contrary to fishing lore, pike do not lose their teeth in August). But on many of our larger lakes, fish will seek cooler water where they can comfortably feed all summer.

Modern anglers, equipped with the latest fish-finding technology and armed with knowledge gleaned from a multitude of media sources, are much better at locating and catching active fish in summer. Often, this means targeting fish in deeper, cooler water. Locating a school and catching lots of willing fish can be loads of fun, but anglers need to be aware of some potential side effects that come with releasing fish in summer.

Catch-and-release fishing is something that many anglers enjoy for various reasons. Conservation-minded anglers simply enjoy catching fish for sport, and release fish to be caught again another time. Harvest-oriented anglers may opt to harvest fish at sizes they deem to be the best table fare, releasing fish they think are too small or too large to keep. Some fishing regulations may require anglers to release fish as well.

Most anglers presume the fish they release survive, but that isn’t always the case. While many released fish survive to be caught again, it’s generally accepted that some percentage of them succumb to the stress of being caught, handled and released.

Biologists and anglers have teamed up on numerous studies across the country to evaluate the mortality of released fish, and have learned that factors like gear (hook size and type), bait (live vs. artificial) and angling practice (fighting time, landing technique, handling time and air exposure, hook removal technique, and fishing location, depth and water temperature) can all affect the survival of released fish.

Most anglers have likely tried to release a fish that was deeply hooked or too stressed to swim away and decided to harvest it instead. Barotrauma is one factor that anglers have probably observed without recognizing or understanding the potential negative effects on released fish. 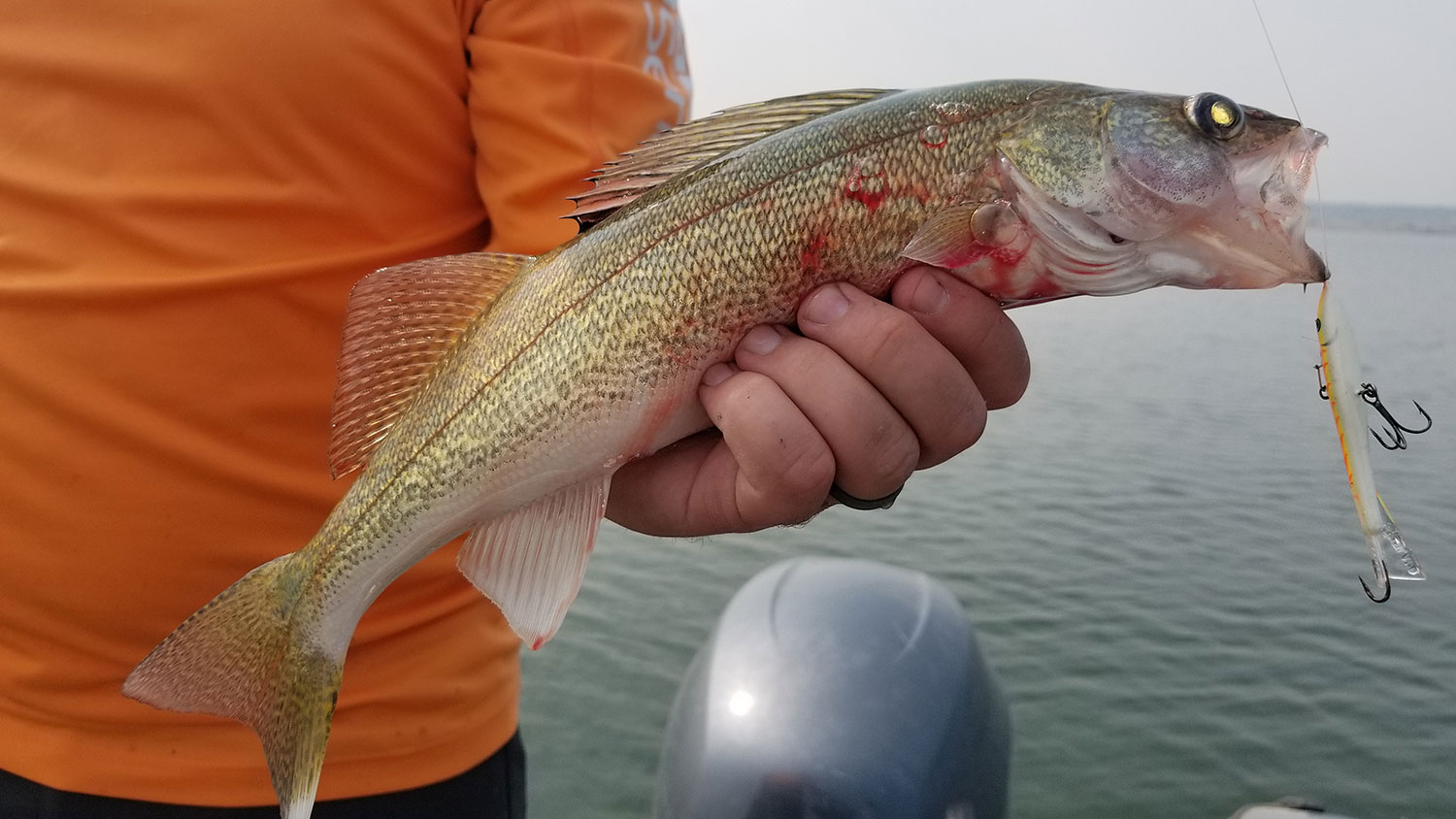 The blood on the side of this walleye is an obvious sign that, if released, chances of survival aren’t good.

The most common symptoms are bulging eyes, gas bubbles formed under the skin, bleeding gills or an expanded swim bladder that pushes the stomach out of the fish’s mouth. When the latter occurs, released fish cannot right themselves or swim back to their original depth. Fish unable to submerge are subject to stress from higher surface temperatures or sun exposure, being struck by boats or increased predation as they become easy prey for birds like gulls or pelicans. 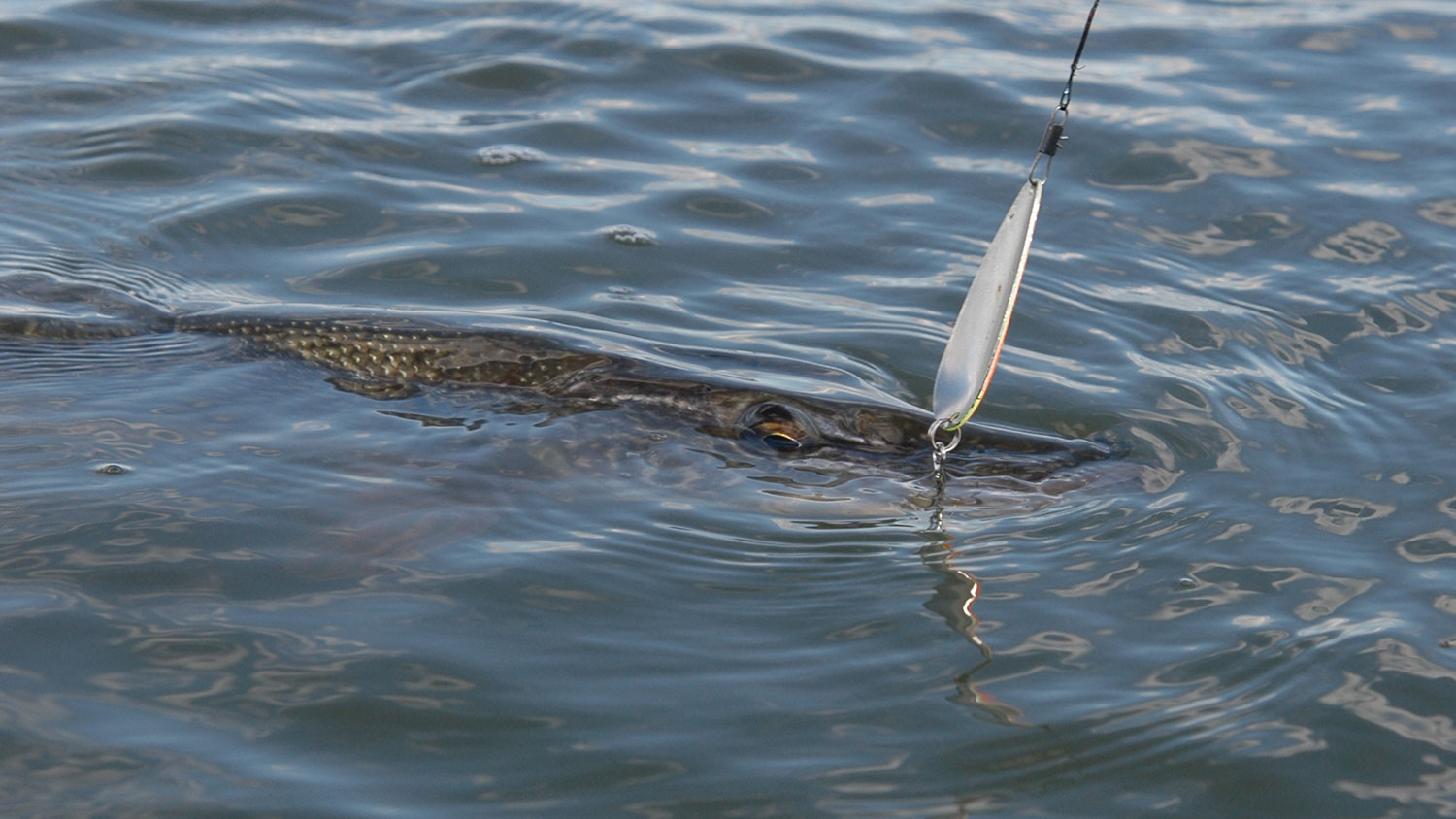 Fish like pike don’t suffer from barotrauma like walleye and perch when brought up from deep water.

Does barotrauma affect all fish the same?

Some fish are more susceptible to barotrauma than others. Fish like trout, salmon and pike have a duct that connects their swim bladder to their stomach, allowing them to “burp” air to decompress their swim bladder as they are brought up from the depths. Meanwhile, fish like walleye, perch or bass do not have this duct and regulate their swim bladder by releasing gasses through the gills via the bloodstream (similar to how a human lung exchanges oxygen and carbon dioxide in the blood). This is a much slower process, and results in the bloated appearance of the swim bladder when a fish is reeled in from deep water.

In numerous studies across North America, largemouth bass, smallmouth bass, walleye and yellow perch have exhibited increased mortality due to the effects of angling barotrauma. The depths of those effects varied depending on the study lake or fish species, but in general most studies have shown a dramatic increase of mortality when depths exceed 10 meters or roughly 33 feet. Coincidentally, 10 meters generally corresponds to the depth where the pressure under water measures one atmosphere.

Where is barotrauma a problem?

Barotrauma is not an issue everywhere in North Dakota because most shallow prairie lakes seldom exceed 33 feet in maximum depth. Concerns are highest in larger, deeper bodies of water like Lake Sakakawea or Devils Lake. Walleye in Lake Sakakawea are notorious for moving deeper in pursuit of rainbow smelt, a coldwater forage fish that also seeks deeper water as summer warms up.

Anglers practicing catch-and-release on these deep walleye may be killing considerably more than their limit at times, and the Game and Fish Department has gotten complaints of small walleye floating on the surface after being released. At Devils Lake, barotrauma has become more common as water depths increased beginning in the early 1990s. In summer, walleye, especially large fish, will often be found at cooler depths, spread out among the deeper basins of the lake. In winter, the concern of barotrauma focuses on yellow perch, the prime target of winter anglers at Devils Lake for decades. When a younger year-class of perch is approaching harvestable size, anglers will often sort through a lot of smaller perch in search of a keeper, and this becomes a concern when many of the released fish cannot swim away on their own due to barotrauma. 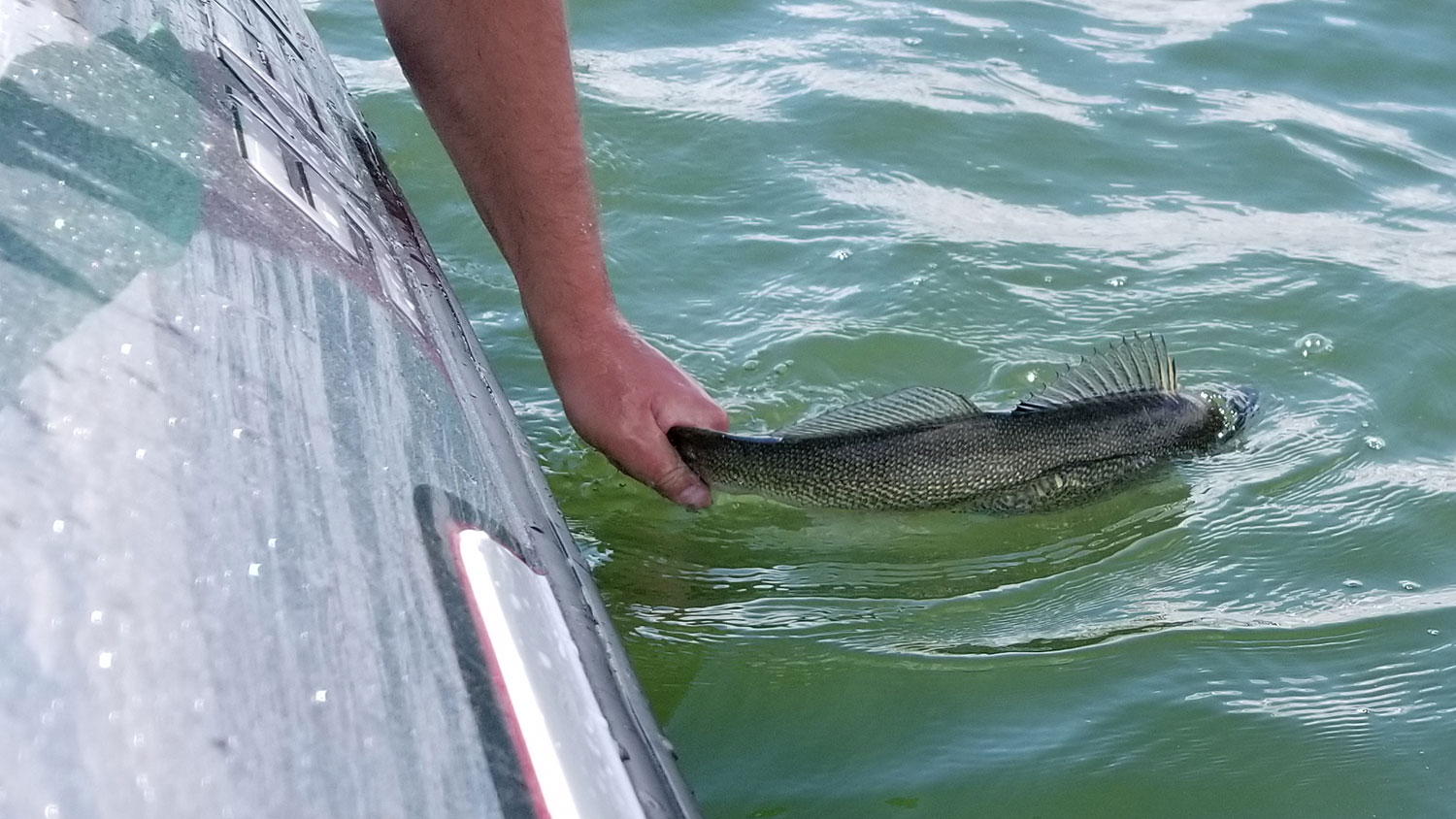 Anglers who want to practice catch-and-release should target fish in shallower water.

What can anglers do to prevent barotrauma?

Anglers fishing in deep water may want to take precautions to minimize the negative effects of barotrauma for the fish they catch. Unfortunately, there isn’t any cure-all that guarantees survival of released fish when they’re caught from deep water. There are several techniques that are promoted to help released fish, but none have been proven effective at completely eliminating barotrauma-induced mortality.

Venting (fizzing) for example, consists of puncturing the fish’s swim bladder with a hypodermic needle and is promoted to help them swim back to their original depth. Descending devices such as drop weights, a weight attached to the fish’s lip that sinks them to their original depth for release, are another tool that some anglers have used to quickly compress the swim bladder to its original pressure.

While a vented or descended fish does indeed swim away more readily, survival is not guaranteed. Venting only deflates the swim bladder and may result in the fish losing its ability to regulate depth due to the puncture wound in the swim bladder. This may lead to modified behavior, limited feeding efficiency, and ultimately death.

While venting is not directly outlawed in North Dakota, the process requires an angler to handle and hold the fish for some length of time while the swim bladder deflates, creating a situation where an angler may be in violation of the requirement to immediately release fish after capture. Descending doesn’t require the angler to handle the fish or puncture the swim bladder, and ultimately results in a quicker release.

Promoters of venting or descending tools seem to accept that once a fish is out of sight, survival is guaranteed, but this isn’t necessarily true. Venting or descending only address the swim bladder symptom of barotrauma, and do not reverse other potentially fatal injuries like hemorrhaging of the liver, heart or other organs, as well as hematomas that produce internal bleeding. These injuries may lead to increased mortality for many of the fish released and, thus, anglers taking action to reduce barotrauma mortality may be responsible for killing more than their daily limit even if they use one of the widely promoted techniques.

Anglers who are concerned with the long-term health of their fisheries can take some practical steps to prevent excessive barotrauma mortality. In North Dakota, there are no regulations directing the depth anglers can fish, but anglers should refrain from practicing catch-and-release for fish like bass, walleye or yellow perch caught from deep water. Anglers who choose to fish in deep water should intend to harvest fish they catch, up to their daily limit, while anglers who wish to practice catch-and-release should target fish in shallower water to maximize survival of the fish they release.