The North Dakota Game and Fish Department’s effort to stop the introduction and spread of aquatic nuisance species in waters across the state is ongoing and getting stronger.

Ben Holen, Department ANS coordinator, said that while Lake LaMoure was added in 2020 to a short list of waters with zebra mussels in the state, North Dakota is fortunate to have low numbers of aquatic nuisance species.

“And we want to keep it that way,” Holen said. “We have great water resources here in North Dakota, but we stand to lose some of that if aquatic nuisance species spread into our lakes and rivers.” 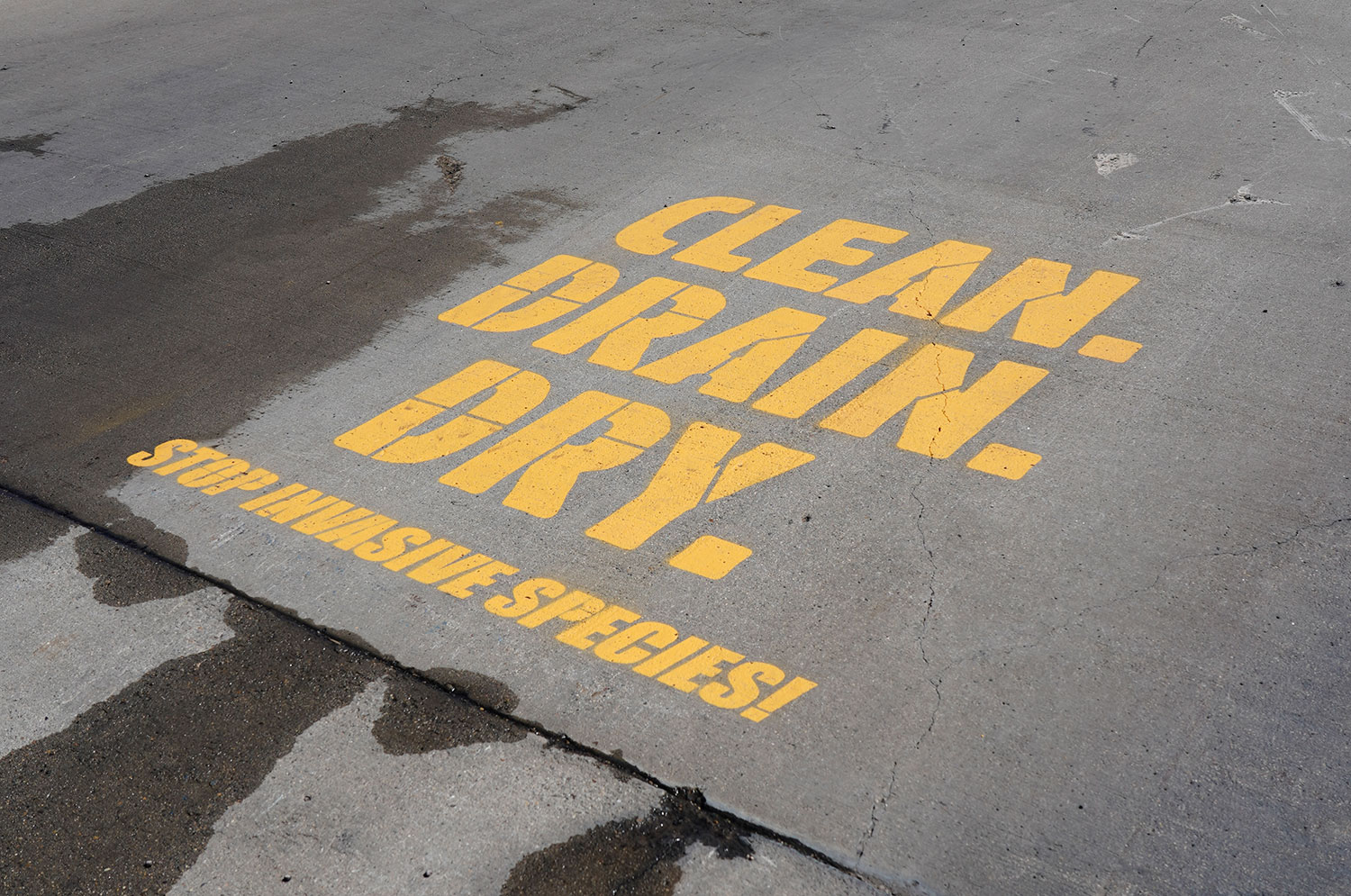 And more than just fishing and hunting opportunities are lost if aquatic nuisance species go unchecked.

“We have good water infrastructure and aquatic nuisance species can cut off water supply to farm fields, municipalities and hydroelectrical facilities,” he said.

Other than zebra mussels, North Dakota has just a few aquatic invasive plants and animals including curly leaf pondweed, Eurasian watermilfoil, bighead, silver and common carp. Curly leaf pondweed can be found throughout the Missouri River System, Lake Metigoshe, the Sheyenne River in Barnes County, and a few small reservoirs.

In the last five or six years, Eurasian watermilfoil has only been documented in the Sheyenne River in Barnes County. Bighead and silver carp are only found in the James River, while common carp are widespread and are found in many waters across the state.

New in 2021 in the continued campaign against ANS is a Game and Fish Department digital marketing campaign, targeting many of the state’s bigger waterbodies and high risk ANS infested waters.

“At those ANS infested waters, anglers and recreational boaters will be seeing an increase in watercraft inspectors,” Holen said. “We’re greatly increasing our watercraft inspection force and getting more people on the landscape to catch aquatic nuisance species.” 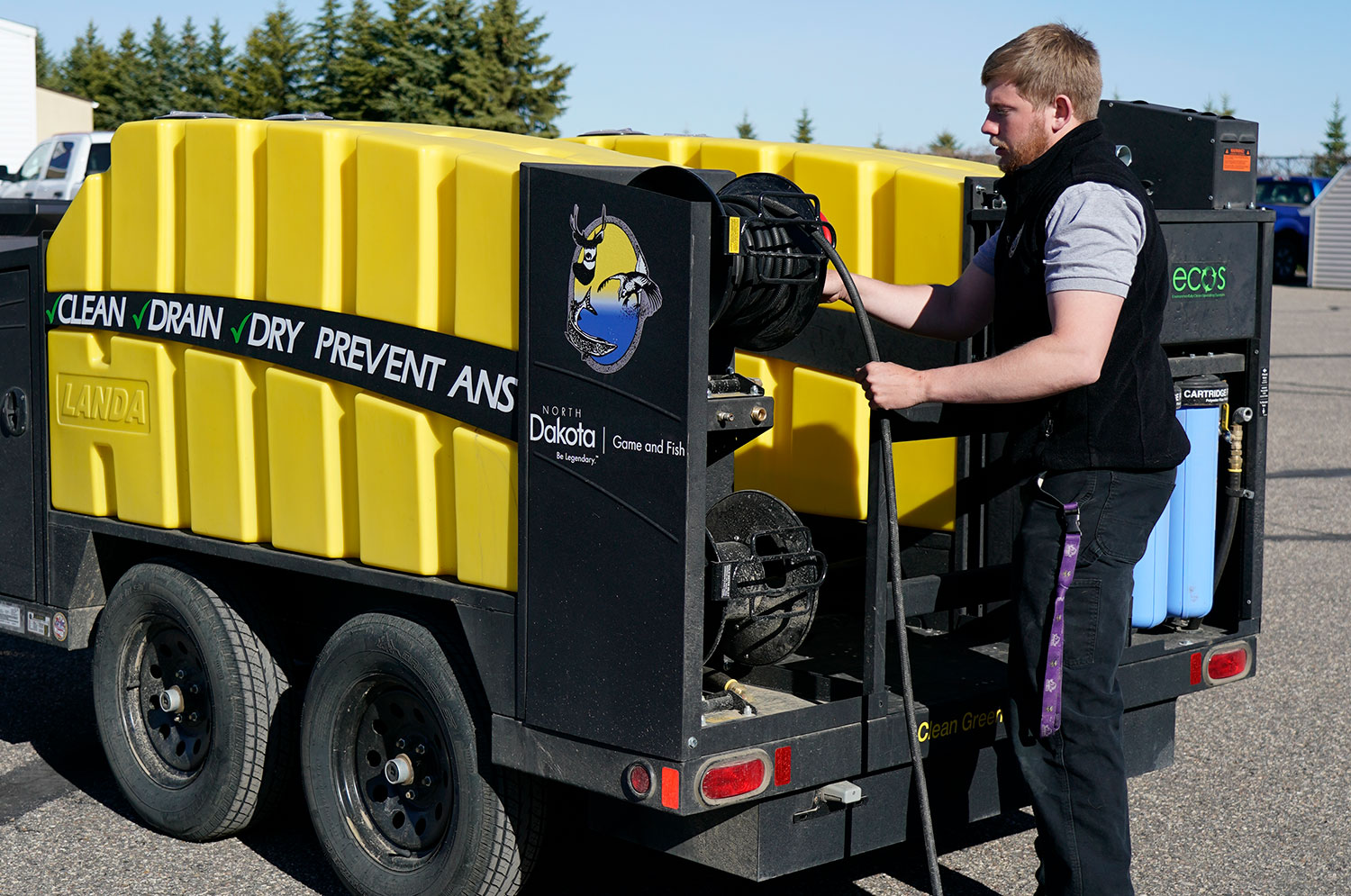 The boat inspections are, in part, another way to educate water users on the threat of aquatic nuisance species.

“That’s one of our main priorities,” Holen said. “Boaters should feel free to ask the inspectors any questions … it’s just an overall good way to learn more about aquatic nuisance species.”

Holen said once a vehicle/boat is in range of the inspection devices, a magnetic sensor is tripped.

“When the sensor is tripped, the ILID will look for motion and if motion is detected, then record video,” Holen sad. “The video is sent to a website where I, or wardens, can review it. Also, when the magnetic sensor is tripped, an audio recording will play a short message to remind boaters to drain all livewells and ballast tanks.”

Boaters are also remind about the Department-installed boat cleaning station near the Red River in Grand Forks and at Lake Ashtabula and Lake Metigoshe.

The self-serve, waterless CD3 units are free and open to the public and include a high-powered air hose, broom, wet/dry vac, a tool for removing vegetation from underneath boat trailers and flood lights to illuminate the cleaning process in low light.

Earlier this spring, Holen deconned the first mussel-fouled boat of the season coming off Lake Ashtabula.

Part of this strengthened effort against ANS also includes the Department’s continued sampling of many waters around the state.

“We sample over 140 waterbodies ever year for zebra and quagga mussels,” Holen said. “And we do vegetation sampling … we’re looking for many other aquatic nuisance species.” 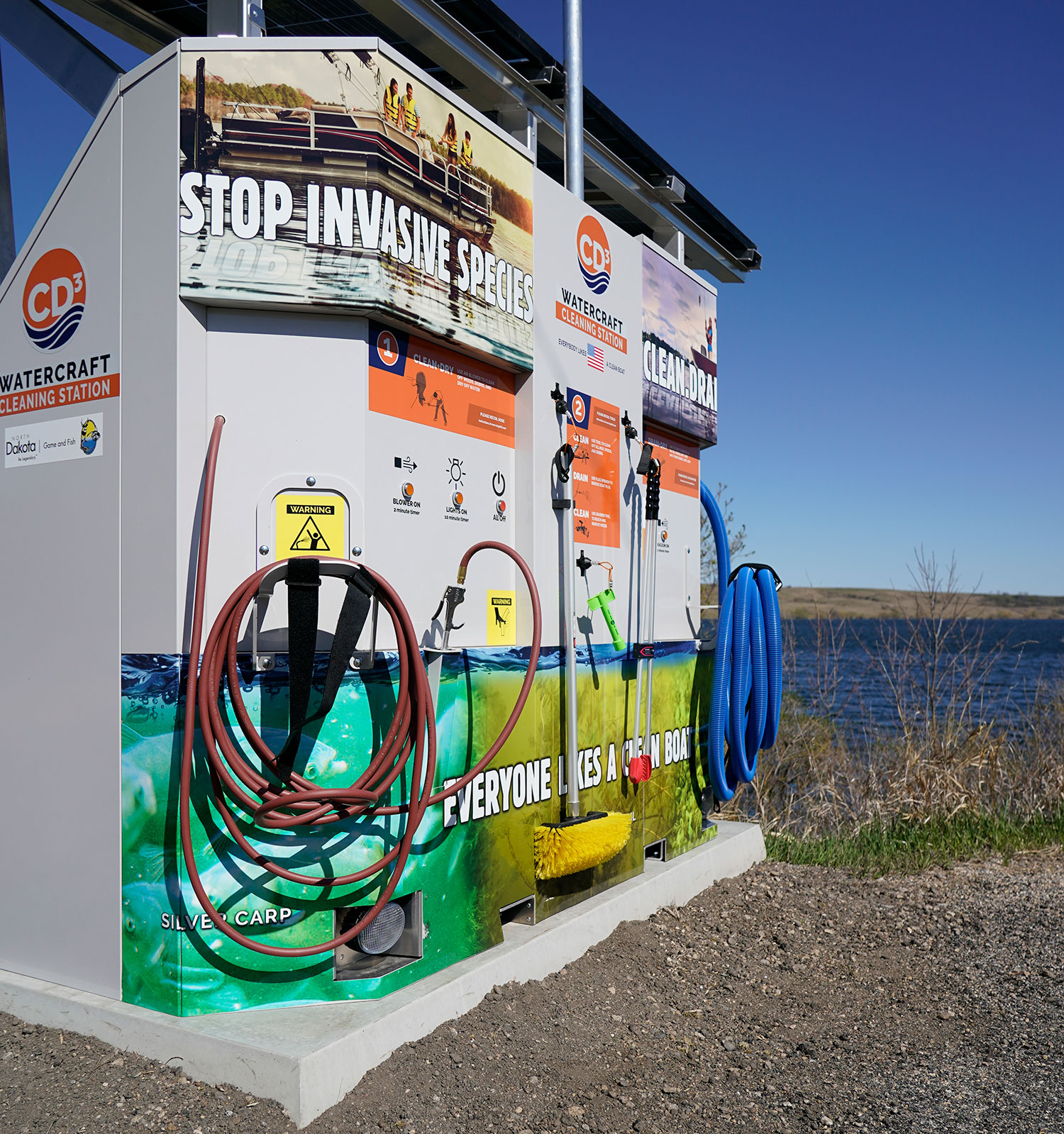 North Dakota anglers, water recreationists and anyone working in lakes or streams are reminded to follow these simple regulations to help prevent the spread of aquatic nuisance species.

Know the laws, as each state and province have their own rules and regulations. North Dakota regulations include:

Also, North Dakota boaters who are traveling to or through other states or Canadian provinces, are reminded to check the aquatic nuisance species regulations of their destination, to make sure they are in compliance.

Mandatory boat inspections may be required along highways or at lakes based on destination or route taken. In general, to ensure compliance, boaters are encouraged to clean, drain and dry equipment.