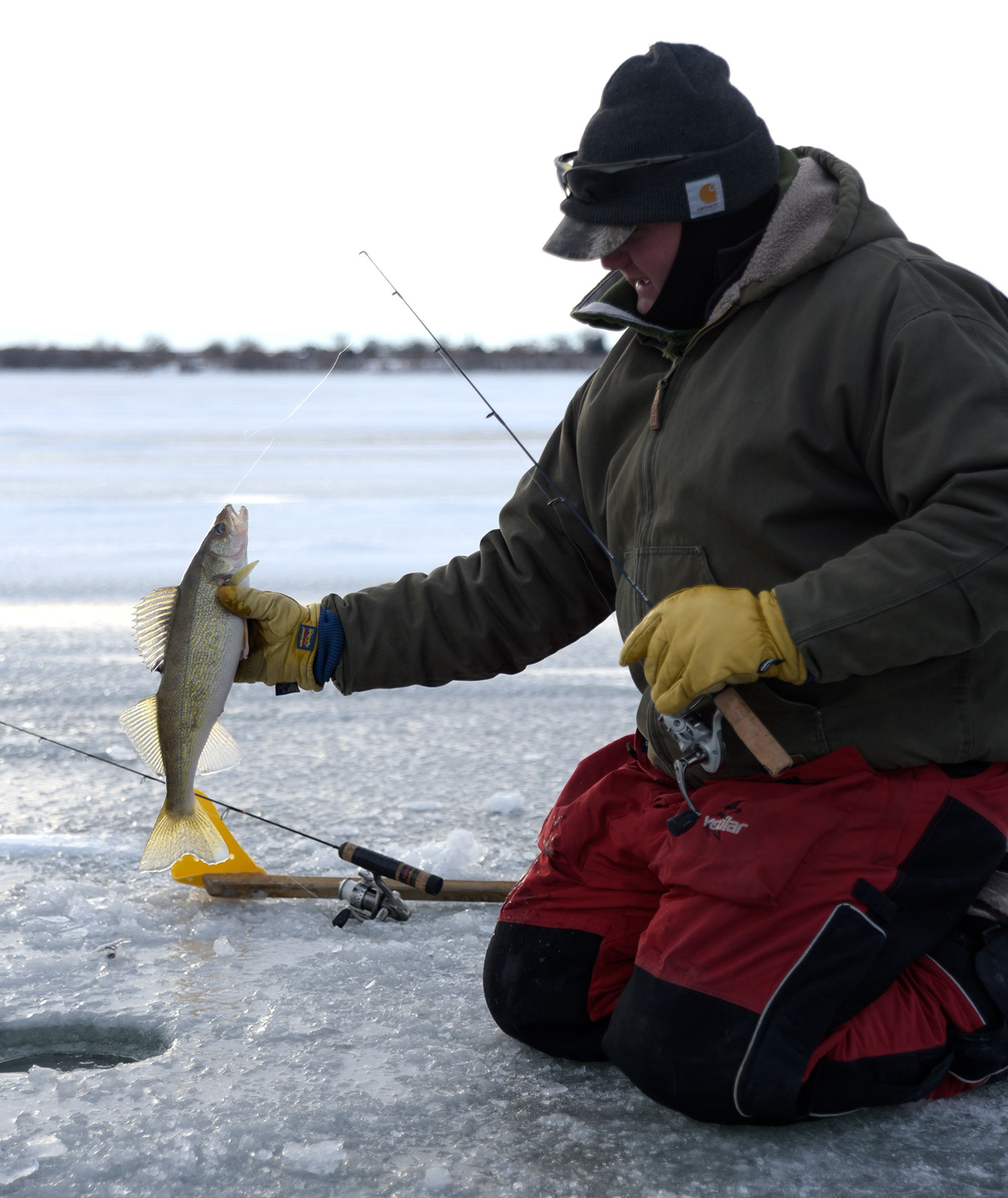 A nice winter walleye from a North Dakota fishery

Before waters harden, signaling the start of the state’s ice fishing season, Greg Power, North Dakota Game and Fish Department fisheries chief, said it’s important to look at where we were when the ice retreated last spring.

“At that time, we had roughly 430 lakes in North Dakota and as we go into the new ice fishing season, we still have 430 lakes, which is kind of hard to comprehend given how hot and dry it was this last summer,” Power said. “We fully expected conditions were such to have some serious summer die-offs, but it never happened.”

Which is good news heading into the coming ice fishing season.

The focus of North Dakota ice anglers no matter the winter is typically walleye, yellow perch and northern pike.

“While you might throw in a few crappie lakes around the state, those three species are certainly the top three,” Power said. “But as we come up to a new ice fishing season, and this has changed in the last five or 10 years, the opportunities for perch and pike are fewer, but there are a lot more opportunities for walleye out there.

“We have a lot more prairie walleye lakes with still relatively young populations, but with incredible growth rates on these fish,” he added. “So, there should be a lot of catchable walleye throughout the state, especially in central North Dakota.”

Today, there are more than 70 prairie walleye lakes across North Dakota’s landscape, which is 70 more than in the early 1990s. And they vary in size from 200 acres to thousands of acres.

“The walleye populations in many of these lakes … it's pretty incredible the number of walleyes out there,” Power said. “Of course, anglers know that one of the problems is that the walleye bite, especially in clear lakes, tends to be in the early morning and right at sundown, so oftentimes you only have 45 minutes to an hour of good fishing. Yet, some of these prairie lakes tend to be a little more muddy, not as clear, and you can get fish all day long, which makes it even more fun.”

According to the statewide average, it takes three full growing seasons for a walleye to reach 14 inches. Yet, in these fertile prairie waters, often loaded with fathead minnows, aquatic insects and other forage, walleyes are hitting the 14-inch mark in two growing seasons, and sometimes an unheard of 16 inches.

“What makes it fun is the turnaround from stocking the young walleye fingerlings one year and a couple of years later you have an instant fishery,” Power said. “And that's kind of where we're at with a lot of these younger fisheries right now in the state.”

While word of a good walleye bite can lure ice anglers from afar, when a North Dakota lake is rumored to be kicking out nice perch, off-the-beaten-path waters can turn into small towns overnight.

“Perch are popular probably because you can catch a bunch of them, it’s a daytime bite and they’re fun,” Power said. “It’s been the perfect storm in North Dakota over the last 20-30 years when it comes to perch fishing. Probably nowhere in North America has it been better for both quantity and quality.”

While there was once 50-plus quality perch lakes in North Dakota, Power said today that number is likely closer to a couple dozen. 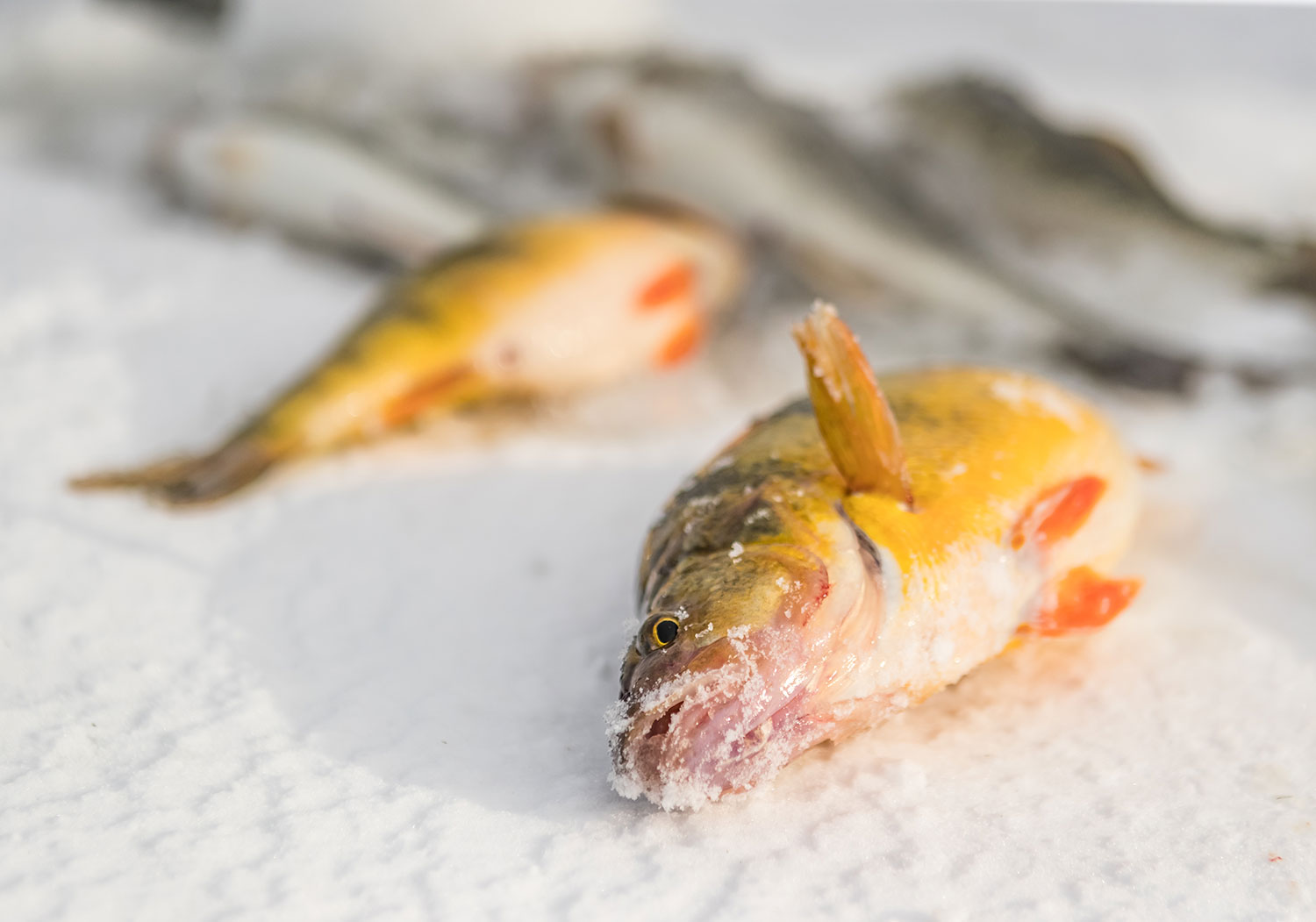 “The perch lakes are down for sure. We've probably had a couple of peaks over the last 30 years, including maybe four or five years ago when we had a nice run of a lot of perch lakes,” he said. “We still have some, but again, it's all about reproduction and productivity of these lakes. We've had a few years of drying out now and we don't get the production, meaning the zooplankton and the little aquatic bugs in particular. So, the growth of the perch isn’t as good and there are just fewer perch lakes out there.”

North Dakota’s pike populations sort of parallel perch. Their numbers are down, but they’re certainly not out.

“On a one to 10 scale in terms of pike populations, we're probably at a seven. We're above average for sure,” Power said. “We've been trending downward. We're not getting a lot of natural reproduction recently, but pike are still in pretty good shape.”

Of course, the biggest uncertainty of the coming ice fishing season is angler access to managed waters during North Dakota’s leanest months.

“Last winter, in terms of ice fishing access, was probably never better. It took a while to get good ice, drive-on ice, and that was maybe the only downside,” Power said. “But then we had a nice cold snap that made pretty good ice and people were able to drive on lakes in the dead of winter, given the lack of snow throughout the state. There were really no access issues throughout the entire state and that rarely happens.”

Ice fishing in North Dakota accounts for about 20% of the annual fishing effort most years. Last year, with access not being an issue, that effort jumped to 25%.

Last winter a record number of residents, about 71,000, along with more than 25,000 nonresidents, participated in ice fishing in North Dakota.

Wentz Walleyes a Plus for Area Fisheries

North Dakota Game and Fish Department fisheries personnel trapped and relocated several thousand walleyes from a Logan County fishery that, depending on the whims of Mother Nature, could winterkill in coming months. 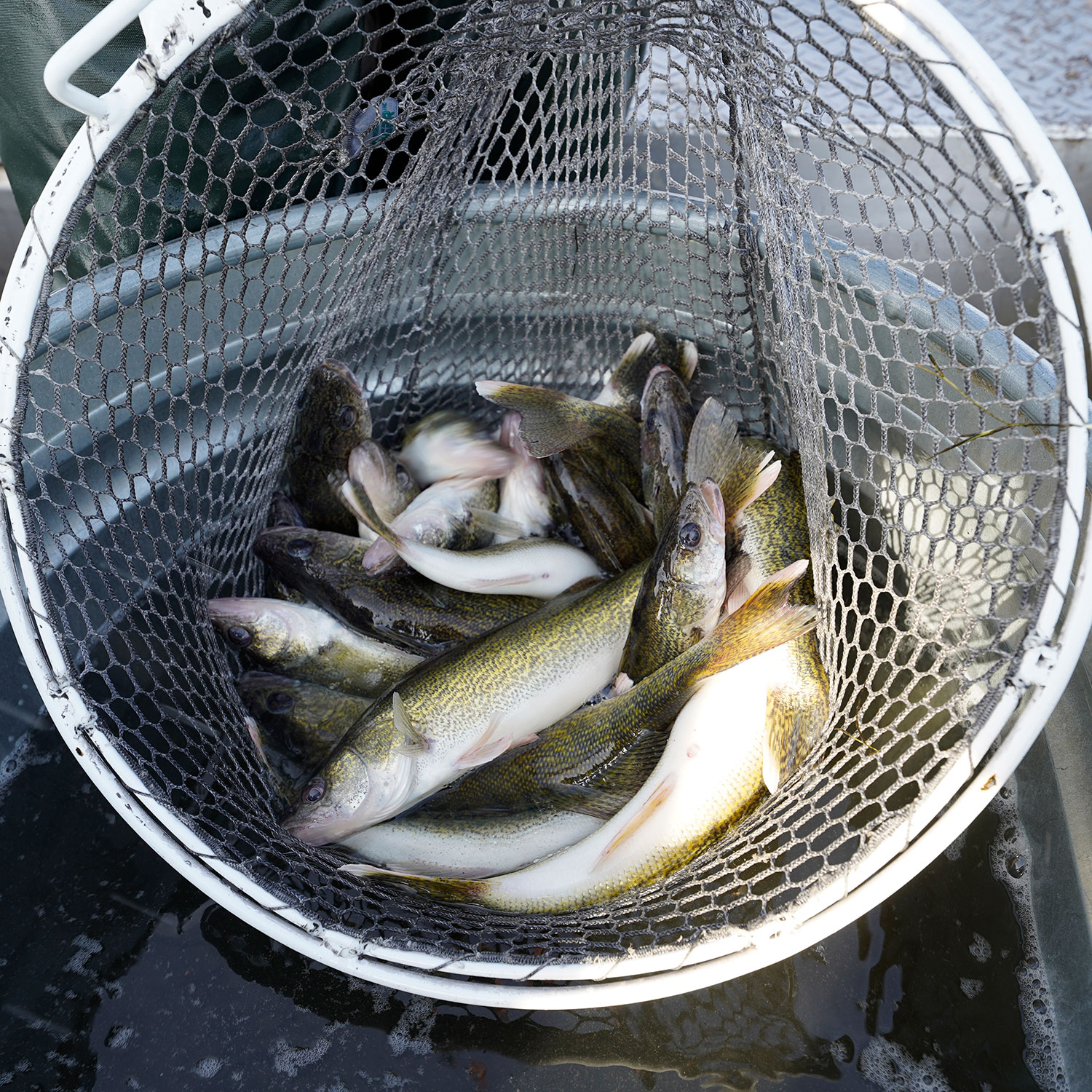 Wentz Waterfowl Production Area, where the fish were trapped earlier this fall, is what fisheries biologists consider an opportunistic fishery. In years with abundant precipitation, Wentz WPA has enough water to support year-round survival.

“We aggressively stocked Wentz WPA in 2019 and 2020 due to its ability to support walleye at that time. It has quite a few walleyes in it that are doing fairly well right now,” said Paul Bailey, Department south central district fisheries supervisor. “Unfortunately, due to the drought we're experiencing, Wentz WPA is down to a maximum depth of about 8 feet. Now, that doesn't guarantee we're going to have a winterkill this year, but it definitely increases the probability of that occurring.”

“Honestly, Wentz is going to be one of the places I plan to hit early this ice fishing season as soon as conditions allow,” he said. “There will still be good angling opportunities in Wentz. We are trying to utilize some of these fish given the higher likelihood of winterkill. They will really benefit some of our better long-term fisheries.”

The plan in early fall was to move the fish to Rice Lake (Emmons County), Braun Lake (Logan County), and Jasper Lake and Lake Josephine (both Kidder County).

“We're trying to take advantage of some of these walleyes from Wentz and stocking them in some other lakes where we haven't had very good stocking success in recent years due to us stocking typically fingerling walleye, which are usually about an inch and a half long,” Bailey said. “And the lakes where we're stocking these walleyes have really abundant perch populations. What is most likely happening are the perch are consuming the small walleye that we're stocking. So, we're trying to get around that and give some of these fisheries a little shot in the arm by stocking some of these fish that are large enough to avoid perch predation.”

Rice Lake, one of the primary destinations for the Wentz walleyes, is one of those fisheries that Bailey mentioned earlier that harbors a robust perch population that is likely consuming the stocked walleye fingerlings.

“Rice Lake is a very popular, good, long-term fishery where we have struggled to have good stocking success in recent years with our hatchery walleye,” he said. “We're hoping to augment the Rick Lake walleye population a bit with these Wentz WPA fish.”

Last winter marked the 20th year of darkhouse spearfishing in North Dakota. Things have changed on the darkhouse front in the state since its inception. 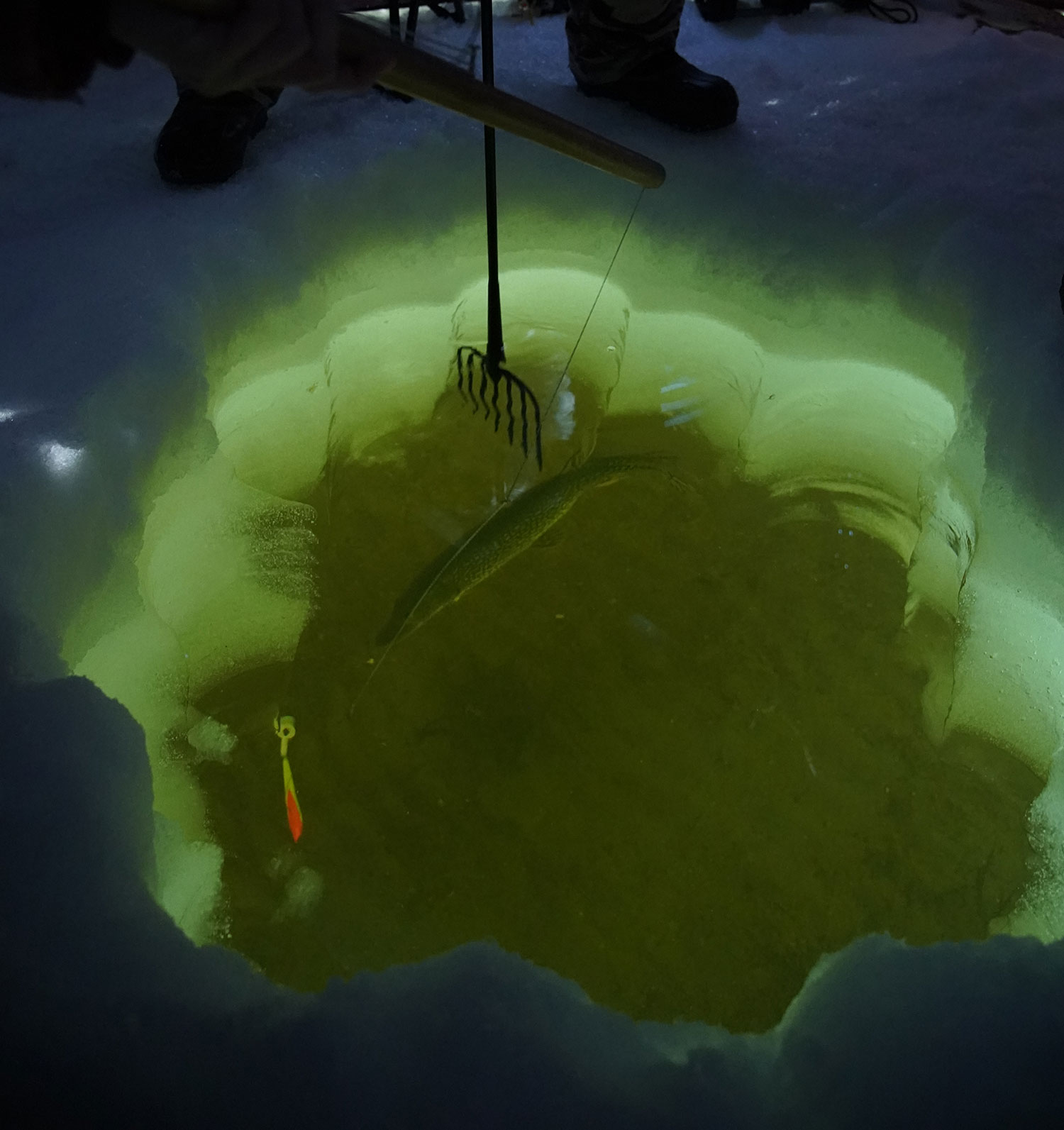