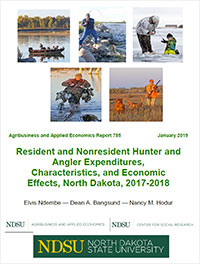 Despite the loss of a substantial amount of wildlife habitat since the previous study (2011/2012), collective spending by hunters and anglers is larger than previous estimates and remains an economically important industry in North Dakota. Key observations from this study are that hunters are spending less money afield—primarily driven by fewer opportunities linked to large declines in deer populations—but collectively hunters are spending more on equipment and gear than observed in previous studies despite diminished in-state hunting opportunities. The number of anglers has increased substantially (both resident and nonresident) as well as the per-person spending on gear and equipment. The increase in fishing expenditures, both open water and ice fishing, has completely offset reductions in hunting expenditures.