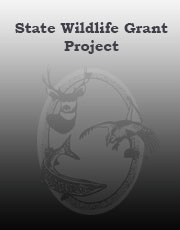 Colonial and semi-colonial waterbirds prefer to breed in high-density groups in a relatively small number of locations, favoring predator-free habitats such as flooded timber, islands, and marsh reedbeds. However, this ‘all eggs in one basket’ breeding strategy makes these species vulnerable to natural or manmade catastrophic events that could wipe out a large portion of the breeding population. In addition, populations have been reduced because of land-use changes leading to wetland loss, bioaccumulation of toxins, and degradation of wintering habitat. Thus many of these species are the focus of conservation efforts throughout North America.

At least 25 species of colonial and semi-colonial waterbirds breed in North Dakota, including herons, night-herons, egrets, grebes, gulls, terns, ibis, American White Pelican, Double-crested Cormorant, and several shorebird species. Identifying and monitoring breeding colonies are the primary tools for tracking populations. Yet, no systematic inventories or monitoring of waterbird colonies are conducted in North Dakota, impeding the ability of conservationists to manage this vulnerable group of birds. Therefore, the objective of the North Dakota Colonial and Semi-Colonial Waterbird Inventory and Monitoring Project was to compile an up-to-date list or inventory of waterbird breeding sites.