In my work as the R3 coordinator, I’m constantly tasked with thinking through ways to make hunting, fishing and the outdoors more accessible to people. Our communication channels have always included information people need to know and relevant updates about game and fish populations at the state, regional and sometimes local levels. 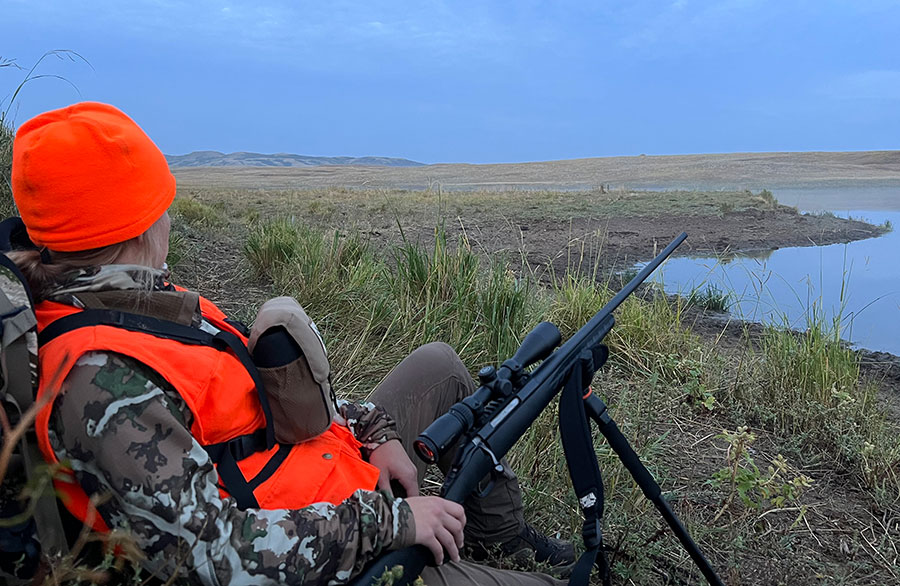 But increasingly, there is a demand to get more specific. We’ve made an effort to produce more “how-to” content, to modernize our sources of information (e.g. Where to Fish) and to share stories that encourage folks to get outdoors and try something new.

Even so, there still seems to be a trend within the R3 community and from our customers to make it even easier – to tell people exactly how, what, where and when in order to quickly experience success afield or afloat.

And admittedly, I sometimes struggle with that. It’s not that I don’t want others to be successful. It’s that in a society used to instant gratification; social media likes, food deliveries and Amazon Prime, the joy gained from outdoor pursuits is heavily founded in the contrast of all that. What’s lost is embracing the slowed pace of sometimes forced patience, the tranquility of having time to soak in our surroundings, the challenge of there not always being a consistent recipe for success, and every now and then, the unadulterated pride felt when the pieces do come together.

And I can’t help but feel like, if we remove failure from the journey all together, we wouldn’t be gifting people the full experience and we may not even retain someone if victory becomes too easy and too often.

Whether we fib about it in hallways and at dinner tables or not, failure is an inherent part of the process, and the eventual satisfaction that has hooked many of us on this lifestyle. So perhaps maybe rather than trying to make hunting and fishing easier, we could simply do better to celebrate the not so impressive moments.

I took the day off work in pursuit of my tribal pronghorn tag. I brewed coffee, toasted a bagel and was on the road by 4:30 a.m. I drove down the two-track and made sure to park past the gate before slipping on orange and making my way across the harvested alfalfa field in the dark to sit by a bale.

I watched the sun come up, I watched a whitetail doe and fawn feed, heard turkeys come down from their roost and eventually spotted another hunter of some sort appear in the corner of the field glassing the draw beyond with seemingly no recognition or care that I was there hunting pronghorn. 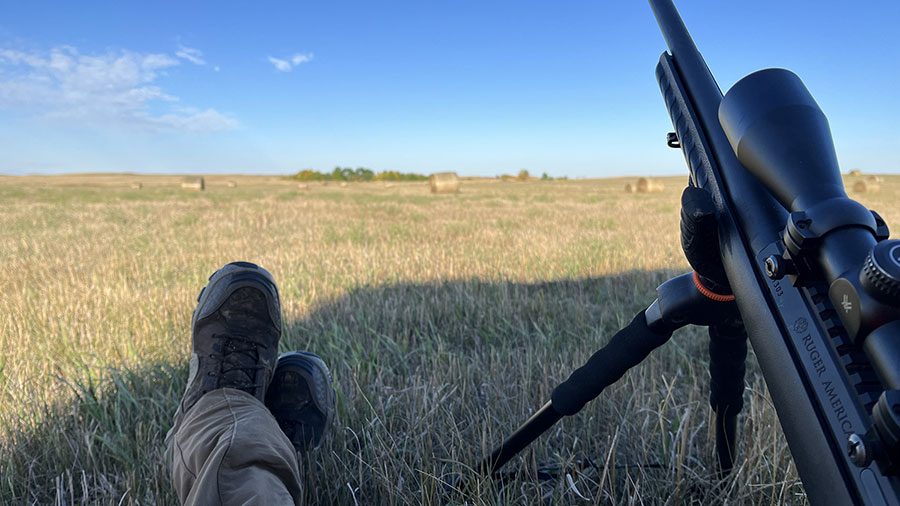 By a little after 9 a.m., I elected to leave and try somewhere else. I walked the section line past the gate to check out another piece. While the peak fall colors did not disappoint, the section had been heavily grazed and was still full of cattle, so I walked back to my car as a pickup and trailer pulled up to the gate.

We exchanged greetings, he was checking on his cattle and said he had just bumped a pronghorn doe on the way in but otherwise hadn’t seen many around since late summer. We jointly admired the beautiful day and views before wishing each other well and going our separate ways.

I devoured some snacks in my car and drove to check a few other spots that had previously harbored pronghorn during scouting, but to no avail. My final stop of the day before returning to Finley and an inbox of emails was a parcel a friend had spotted a buck on right at dusk the Saturday prior. I hiked to the almost-glowing, rust hillside of little bluestem; this was a fine piece of remnant prairie. I sat down and pulled up my binoculars and instantly spotted a group of white butts.

My afternoon got longer.

I quickly formulated a plan and started walking. My breath was heavy as I crested the ridge I assumed to be beyond the group and slowly made my way in their direction, stopping often to look both ways, and creeped over ledges that had not been apparent from my bluestem hillside.

Funny how the prairie is so deceivingly “flat.”

Almost 30 minutes passed, and I had crept over just about every mound and hill, made a big circle and was definitely far too close to where I had originally glassed them to be anywhere near on track. I looked back in that direction and saw nothing. I must have misjudged a ridge, unknowingly spooked them long ago, or they simply quickly moved on.

Almost two hours since I originally pulled in there “just to check,” I sat on the warm grass, chugged water and laughed at myself. That was not the first time the rolling hills and their wise inhabitants have fooled me. 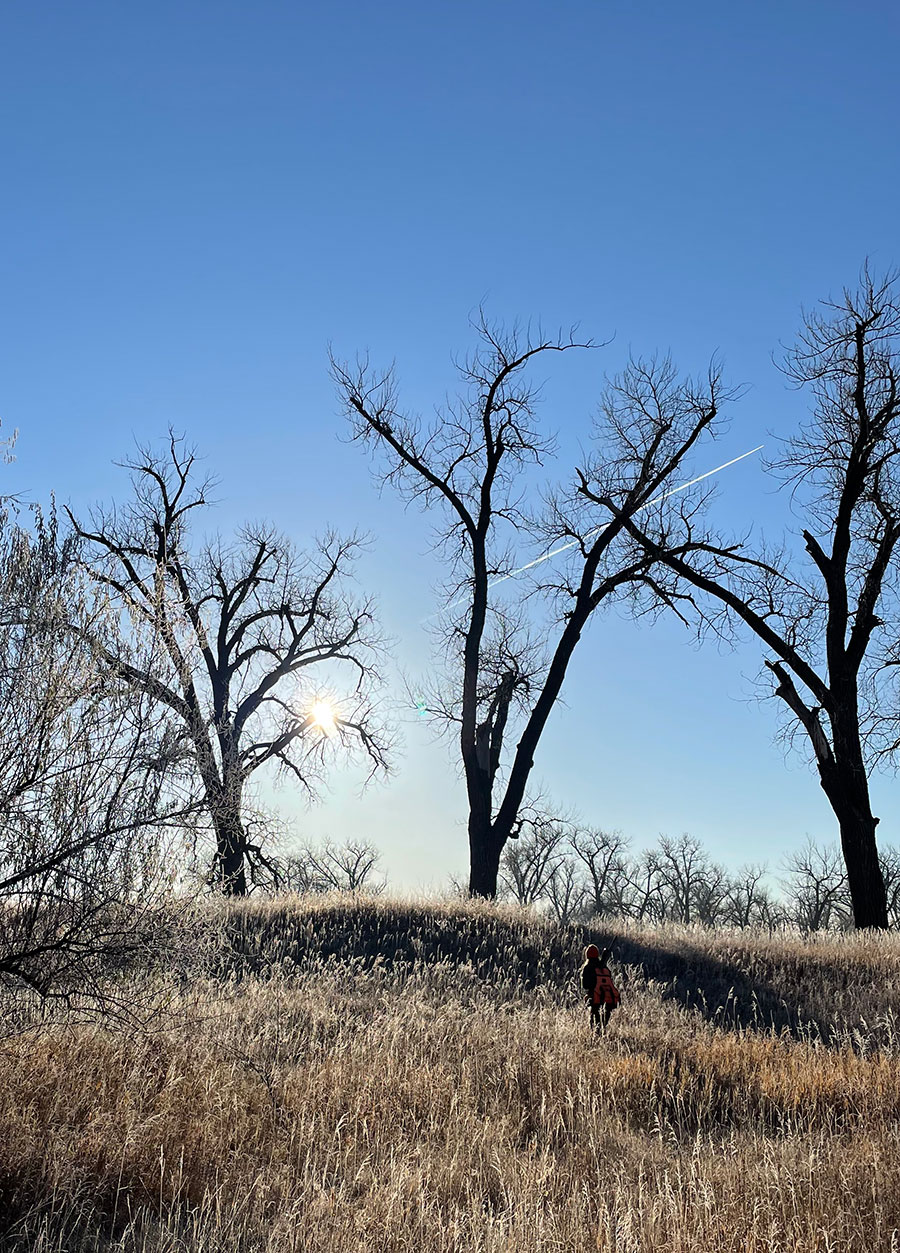 My in-laws were in town visiting. On Saturday, my father in-law tagged along for a few walks to appease our need to hunt the ceremonious pheasant opener. Afterwards, we grilled steaks, made apple crisp and visited.

With plans to hit the road by 10 a.m. the next morning, my husband slept in and spent the morning with his parents but encouraged me to sneak in a quick solo hunt. I probably slept in a little too late myself as every parking area harbored a pickup when Fins and I rolled up.

Fortunately, due to years of exploring public lands throughout the seasons (and sometimes failing at the intended endeavor), I always had a plan B, C, D and E for situations like that one. Besides, we were simply there to stretch our legs and enjoy the crisp morning for an hour or so.

We scrambled through a wooded patch to the long, narrow cattail slough I had in mind and Fins went on point rather quickly. Hen, hen, hen, rooster … it flushed to my right and flew almost straight behind me.

A bird I couldn’t quite catch a definitive glimpse of landed ahead in the cattails. We worked in that direction and Fins locked on a hard point in the thick of it. I kicked to flush the bird, a young rooster. 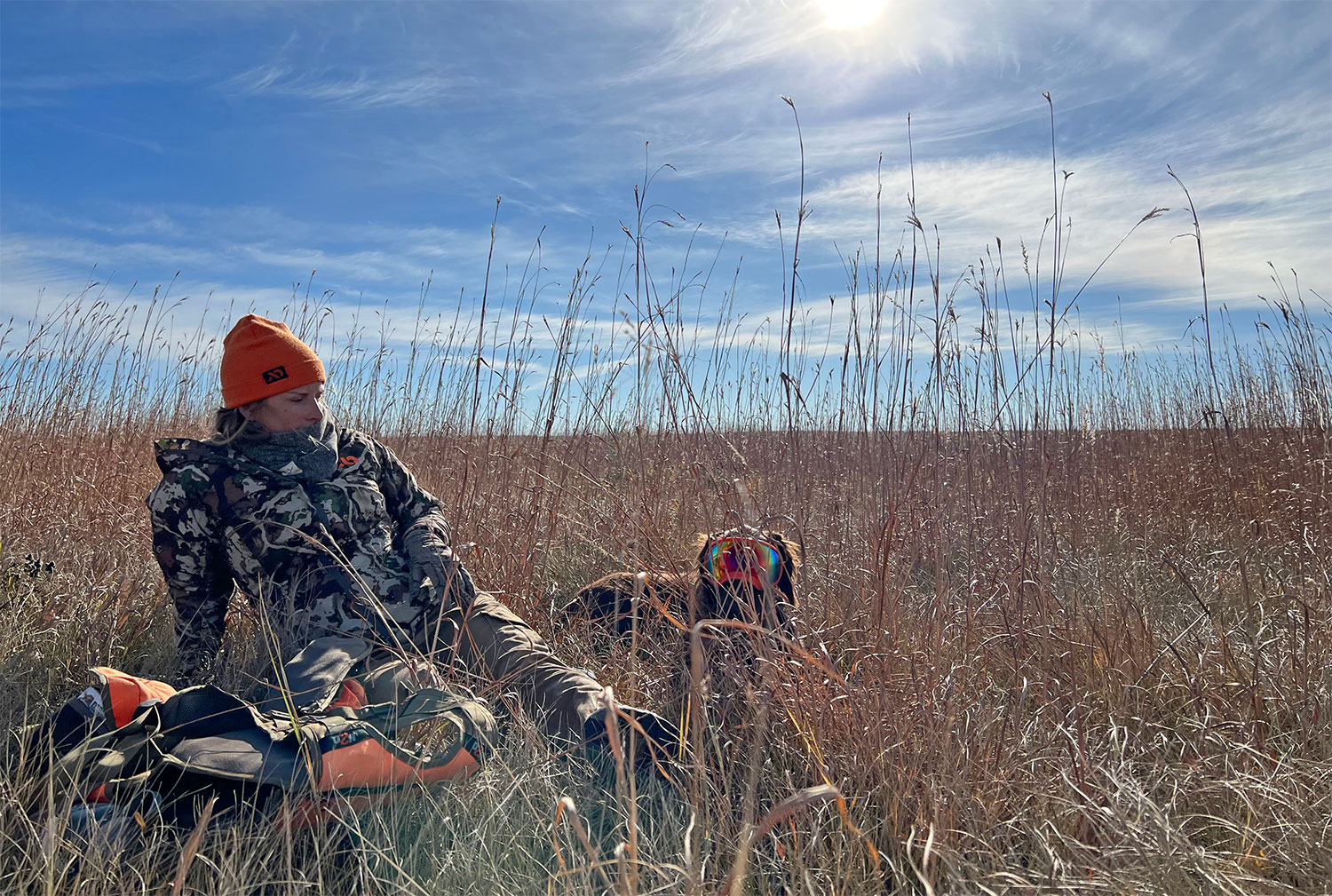 I apologized to Fins and gave him a drink of water. We didn’t have time to walk the entire strip, so we turned back north, looped around a harvested food plot and had a few hundred yards of woods between us and the car.

Fins got birdy and I did my best to weave through the trees and shrubs, trying to stay with him but also remain in a position with a shooting window. He finally locked up near a log. I kicked and kicked and nothing. “Come on bud,” I said, urging him to move on but he didn’t budge.

I took another step toward the log and a hen erupted. Then, out of a small patch of trees, a rooster flushed out the end … I missed. I caught a glimpse of another rooster flying out the other side and I tried to shoot through the trees and missed, then I turned almost a full circle and took a long shot at one that flushed out the back … and I missed.

Defeated, embarrassed and apologetic, I ushered Fins back to the car.

I smelled waffles and coffee when I stepped in the door back home. “Any luck?” my husband asked.

You don’t want to know.

Certainly, my October isn’t exclusively riddled with outings such as these. In fact, there have been more moments of hunting joy and pride than maybe I’m worthy, but I can’t help but wonder if they’d feel as good without a couple of slices of humble pie mixed in. If filling vests and tags was something guaranteed by simply following the instructions on the box, would it really be so unexpectedly, wonderfully addicting? 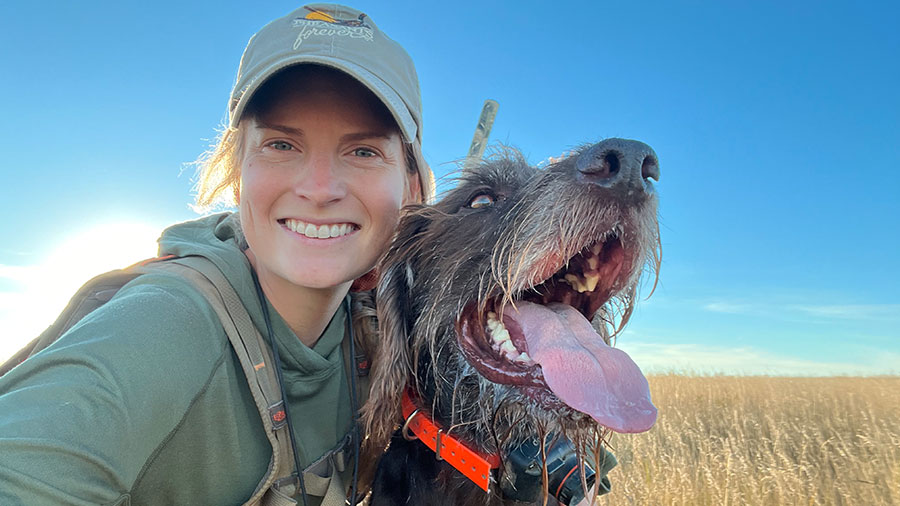