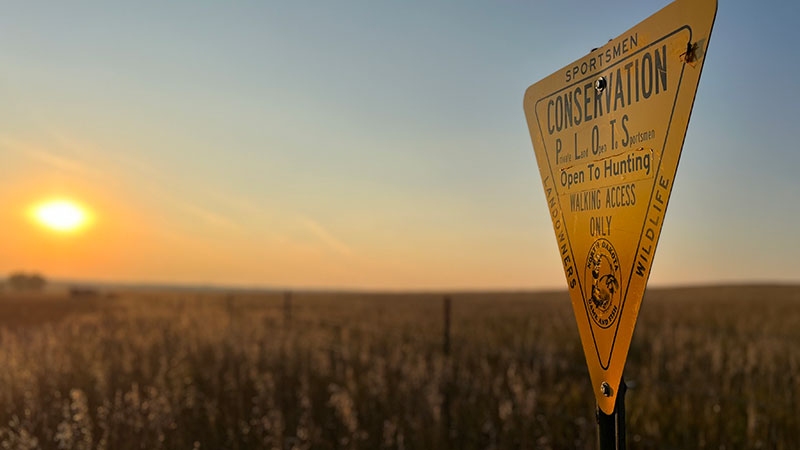 I’m slowly making my way up a hillside, legs heavy from the off-season and the miles already put on them today. The entire PLOTS tract looks good. Sure, the low areas feel a little thick for the sharptails we are after, but this hillside is picturesque. Green needle grass and side oats grama, the seed heads of echinacea and the fading blooms of goldenrod … I note a few grouse beds below my feet. I think maybe I should drift farther right, there’s something about sharpies and fence lines. Not one step later I hear the chuckles. Behind us. Right on the fence line the covey erupts well out of shooting range.

“Finsss, what was that?” But he looks at me unapologetically, panting heavily, tongue hanging out of his mouth, begging for another drink. We wait as long as we can to let the day’s heat fade and still allow time to walk just this piece before sunset, but it is still warm, far warmer than Finley’s optimal hunting temperature of about 20 degrees.

We crest the hill, pause just in case, and unload to give into the dog’s demands. I ask Scott if he saw them go down, and we half-heartedly discuss pursuing them and whether the land was posted, but we both know the day is fading and we’ve only got one Nalgene left for poor Fins.

“There goes some deer,” Scott says. We watch a mule deer doe and fawn cross the same fence as the grouse did and amble off.

I take a deep breath and exhale any frustration from the missed opportunity on what I presumed to be the only covey here. It’s Sunday and no matter the fate of tonight’s walk, it’s better than my desk tomorrow. These are the days we anxiously await.

“Well, let’s just hit this low spot then loop back towards that last hillside of snowberry we haven’t hit and head south back to the car.” Scott nods in agreement and clips the water dish back on his vest.

Four more mulies get up out of the low spot we were planning to hit and bounce to the west. Great. I didn’t have high hopes as it was, but I assume they bumped whatever birds might have been lingering in that snowberry.

No matter, we stick to the plan. There’s a thin strip of cattails at the very bottom, I pause to see if it’s wet at all and decide where to cross when about 20 yards from Scott and me, two mule deer bucks bust out of the cattails and head south too. Woah. It’s crazy they held that whole time.

We spread out and begin the ascent up the final hillside. I catch myself looking down at my boots and lift my head to find Finley getting birdy. He’s darting quickly back and forth with renewed energy, his nose to the ground and tail flickering before he begins to slow to what would be a point when the grouse begin to flush.

I’m caught off guard and not in a great shooting position. There must be at least 10 birds. I scan the sky anxiously trying to find a clear shot, a few bank to my right and I pick one and shoot. I mark where it falls as Fins is busy retrieving Scott’s bird. I call him over next to get mine. 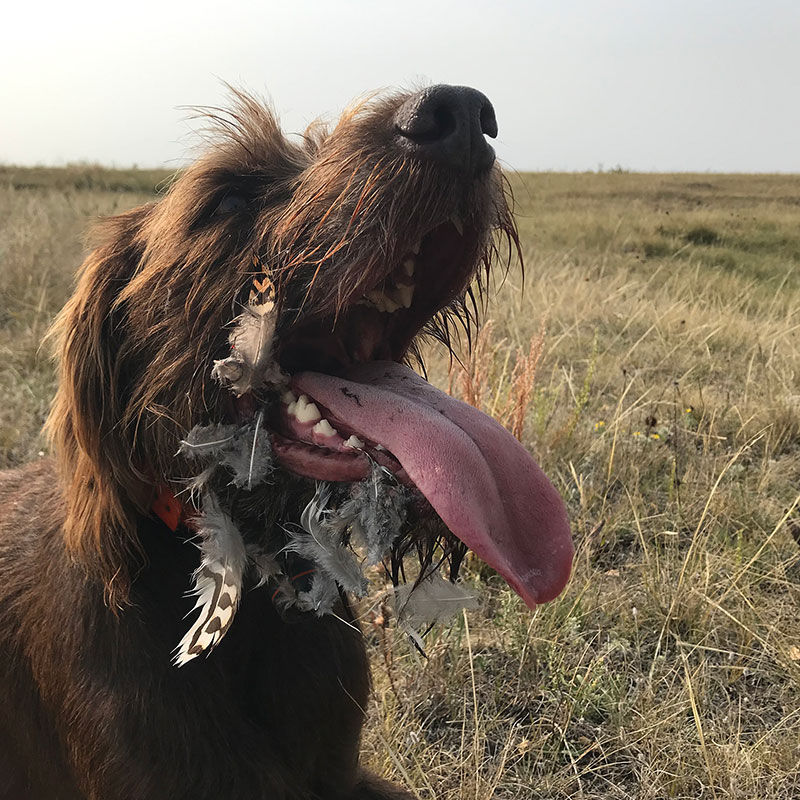 The escapees are definitely young birds as they didn’t go far. We regroup and crest the hill, it’s only 50 yards before we bump a few again. Scott gets his second. I mentally mark where one lands as I try to stay focused. Four more get up. Fins is in my way for the close shots but two fly behind and I do a 180 and drop another to my surprise. Amidst the chaos, Scott has his final bird in hand and Fins is in route to bring me my second.

What just happened. We convene to recap the last few minutes smiling ear to ear. Finley collapses in the grass, beard covered in feathers, and he gives me a look that says, “There! Are ya happy?”

I’m convinced I know where at least two of the birds landed between here and the car but I have an overwhelming sense of contentment. I move slowly but anxiously with my eyes glued to Finley on the walk back, but we reach the fence and the PLOTS sign without a flush. Maybe another day we’d circle back, and insist on relocating one, but not today. We unload and cross the fence as the sun starts to slip below the horizon.

The three of us drift off on the couch to football announcers and try our hardest to forget that tomorrow is Monday. 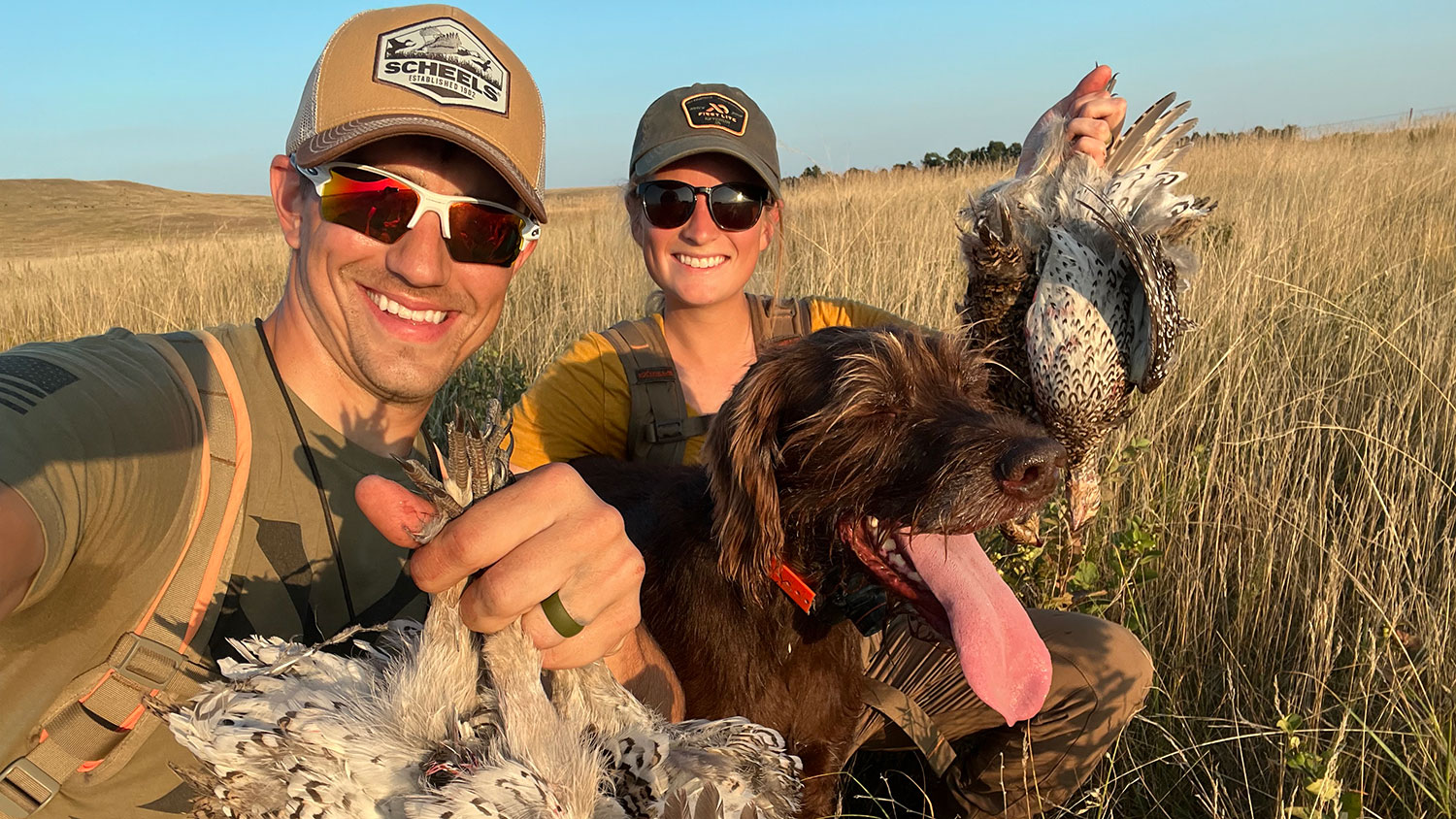