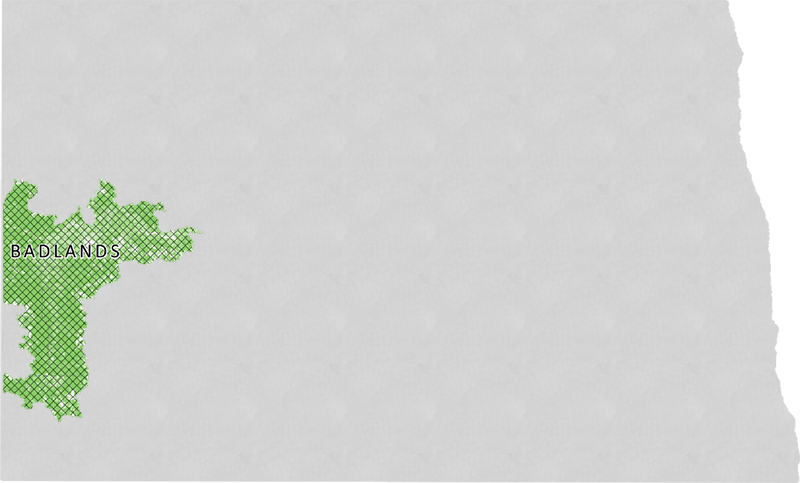 This landscape component includes the area associated with the Little Missouri River (see Figure 25) drainage and is commonly referred to as badlands. This highly dissected landscape was formed by water erosion of the soft silt or clay soil and collapse following lignite coal bed burnings. Badly eroded clay-scoria slopes, buttes, and steep canyons are common throughout.

Thickets of small trees and shrubs or woody draws of cottonwood and green ash naturally occur on north or east facing escarpments. Bare hills with scattered Rocky Mountain juniper, and shortgrass prairie in the bottomland and on top of buttes occur throughout. A few small, unique stands of native coniferous forest are present, specifically in Billings, Golden Valley, Slope and Bowman counties. The lack of fire has allowed the expansion and encroachment of juniper in some areas. Ephemeral or intermittent streams are common in steep valleys. Natural wetlands are rare but water impoundments are common. Cattle grazing is prevalent and the most common land use. Recreation, and oil and gas activity are intensifying. The badlands are becoming extremely fragmented with the escalating number of roads required for industrial development. The US Forest Services owns and manages about 1 million of acres as multiple-use in this landscape. The Killdeer Mountains and Ponderosa Pines Focus Areas are located within the exterior boundaries of the Badlands, but included in Upland Forest (see Figures 38 and 39). The Badlands are a fragile landscape harboring many unique wildlife species in addition to the SCP. The entire landscape could be considered a Focus Area.