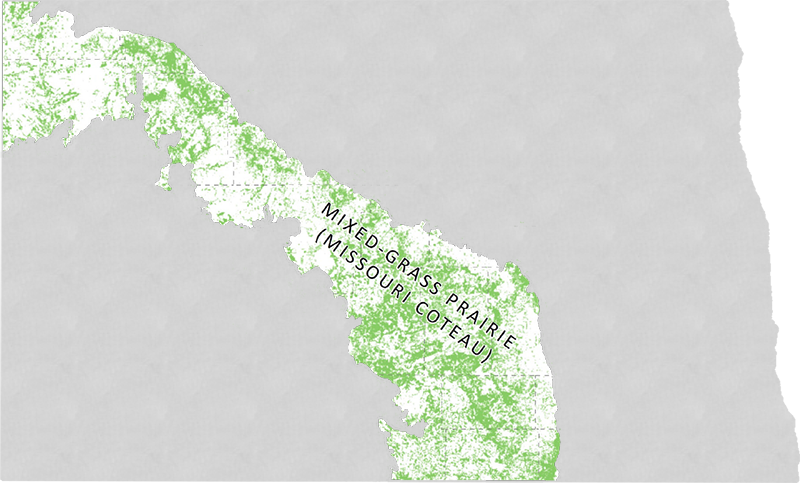 Description and Overall Condition: This landscape component includes the mixed-grass prairie of the Missouri Coteau and associated wetlands. This region marks the boundary of the western limits of glaciation in North Dakota. The hummocky, rolling hills of the Missouri Coteau dramatically rise 150 to 500 feet above the Drift Prairie. A high concentration of wetlands are present, roughly 800,000 basin acres. Alkaline lakes are also more prevalent here.

Streams and rivers are nearly absent, as are upland deciduous forests but tracts of aspen parkland occur in the north. A considerable amount of native prairie remains and there is extensive cattle grazing. Areas of reduced slope, particularly the western edge, have been converted to cropland such as small grains, sunflowers, corn, and alfalfa hayland. The Coteau is known for supporting some of the highest numbers of breeding ducks in North America. Due to the large amount of grassland and wetlands which remain or have been restored, this area is especially crucial to many species of grassland wildlife and constitutes the focus area “Missouri Coteau Breaks.” Much of the Coteau is classified as good to outstanding for wind energy potential, which could pose the threat of habitat fragmentation. Irrigation and new advances in cropland could allow for native prairie to be farmed. Oil and gas activity is established in the extreme northwest.