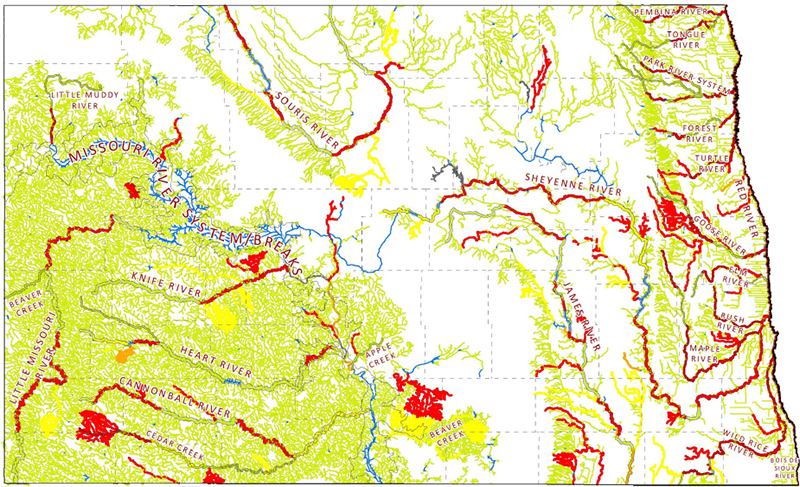 Description and Overall Condition: This landscape component includes all rivers, streams, and associated riparian areas which are distributed throughout the state. River floodplains and the associated riparian habitat represent narrow corridors of unique habitat in the state. Overuse of cattle grazing in some areas causes degradation to riparian habitat and is one factor relating to reduced water quality (i.e. fecal coliform bacteria and Escherichia coli impairment).

Development such as increased housing along the Missouri River is disturbing to some wildlife species and destroys riparian habitat. Many small low-head dams have impeded fish movement. The creation of larger dams such as Garrison Dam resulted in numerous positive benefits, but is an obstruction in the natural cycle of cottonwood regeneration and fish movement. The North Dakota 2014 Integrated Water Quality Report (NDDOH 2015) reported 47% of rivers and streams as fully supporting but threatened for aquatic life use, 28% are fully supporting the aquatic life, and 25% were assessed as not supporting aquatic life use. Non-point source pollution, or siltation/sedimentation and stream habitat loss, is a primary cause of aquatic life use impairment. Dissolved oxygen levels are depleted from organic enrichment and nuisance algae and plant growth is a result of excessive nutrient loading.