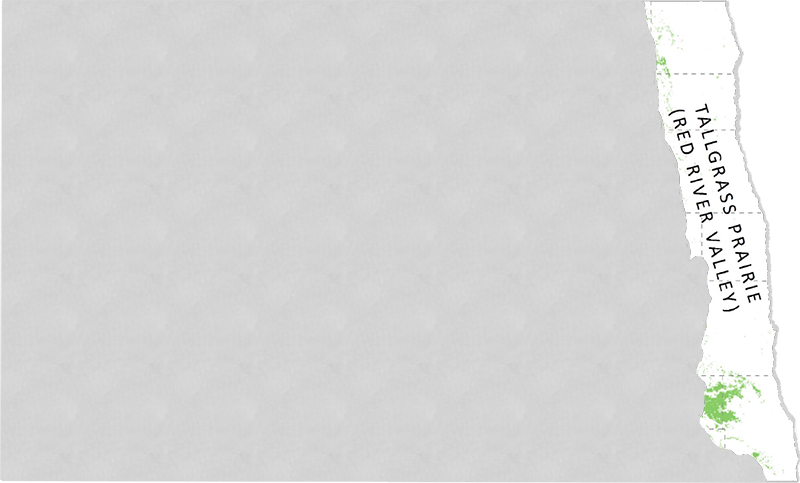 Description and Overall Condition: This landscape component consists of the tallgrass prairie historically found predominantly in the eastern one-fourth of North Dakota. The Red River of the North forms the state line between North Dakota and Minnesota. This region today is commonly referred to as the Red River Valley. 10,000 years ago, a large glacial lake named Lake Agassiz covered this region.

The flat topography and rich soil of the glacial Lake Agassiz basin provides for excellent but intensive agricultural production including potatoes, beans, sugar beets, corn and wheat. By the 20th century, much of the tallgrass prairie had been converted to farmland. Few tracts of native vegetation remain in this region today. Places where small natural areas remain intact are remnants of Lake Agassiz. The shoreline of Lake Agassiz created diagonal striations of sand and gravel a few feet high that are still visible in aerial and satellite imagery today. These beach ridges are one component of the focus area “Sand Deltas and Beach Ridges” in conjunction with several large fan-shaped deltas of sand formed from Agassiz. Saline areas of unsuitable farmland due to the high salt concentration of the soil remain intact. The largest continuous area just west of Grand Forks is also a focus area, the “Saline Area” or sometimes referred to as Grand Forks County Prairie. The Red River Valley has few wetlands compared to the mixed-grass prairie to the west. Farmland with woodlot and shelterbelt plantings is now prevalent throughout the region, however, advances in farming practices are resulting in the removal of shelterbelts. Several streams important to native fish meander across the Red River Valley, from west to east, draining into the Red River.