A sagebrush obligate, Brewer’s Sparrow is closely associated with shrub communities dominated by big sagebrush. Sagebrush grasslands with >10% average shrub cover and average shrub height of 0.5-1.5 m are preferred. Not present in areas where shrub cover decreases below 3-8% average. May also occasionally occur in juniper woodlands. The nest is located in sagebrush or other shrubs. Prefer nesting in medium-sized, alive or mostly alive shrubs of 50-90 cm tall with the nest located from 7-104 cm off the ground. Forage in tall, live shrubs or on ground for alfalfa weevils, aphids, caterpillars, beetles, or seeds.

Key Areas and Conditions for Brewer's Sparrow in North Dakota

No specific sites have been identified, but the species is likely to occur only in western Slope and Bowman counties.

Loss and/or degradation of big sagebrush habitat. Fire can destroy sagebrush and can take many years for the community to recover. Invasion of non-native grass or forb species (e.g. clubmoss) could negatively affect the sagebrush community.

Periodic monitoring to gather vegetation and land use trends in the sagebrush transition zone may be needed to identify threats and prevent loss of habitat.

According to the Partners in Flight Landbird Conservation Plan, long-term population trend monitoring such as the Breeding Bird Survey is generally considered adequate, but may not account for some issues (e.g. bias). However, few BBS routes in North Dakota intersect with Brewer’s Sparrow range. Future monitoring proposals should follow recommendations North American Bird Conservation Initiative ‘Opportunities for Improving Avian Monitoring’. 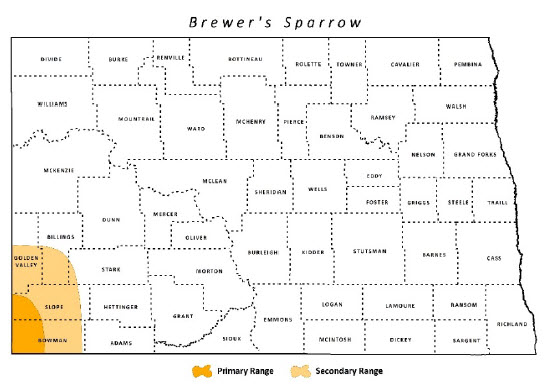