Primarily associated with sagebrush, particularly big sagebrush. Silver sagebrush and rabbitbrush is utilized to a lesser extent. Riparian and upland meadows, irrigated and non-irrigated croplands and pasturelands are also used, especially for broodrearing habitat. Leks may be natural openings within a sagebrush community or created by disturbance such as dry stream bed channels, ridges, grassy meadows, burned areas, gravel pits, plowed fields, and roads. Nest under larger bushes generally within 1.5-3 km of the lek. Brood-rearing habitat should contain succulent herbaceous vegetation such as false dandelion, hawksbeard, milkvetch, and insects such as grasshoppers. Rely nearly exclusively on big sagebrush for food during winter.

Key Areas and Conditions for Greater Sage-grouse in North Dakota

Most active and inactive leks have been identified and only occur in far southwestern North Dakota. These leks and the surrounding area (within 2 km) should be of top priority.

The destruction and/or degradation of sagebrush throughout North America is negatively affecting this species and is the biggest threat. The quality of remaining sagebrush has declined due to grazing, fire suppression or excessive fire, invasion of exotic plants, and other human-related degradation.

Disturbance to leks and nesting sites from direct and indirect human activity is of great concern. Recent research in Wyoming indicates sage grouse may lack resistance to West Nile virus. Most, but not all, research suggests that hunting does not have an impact on sage grouse populations. Mortality such as birds flying into electric wires, fences, utility wires, and being hit by automobiles occur. 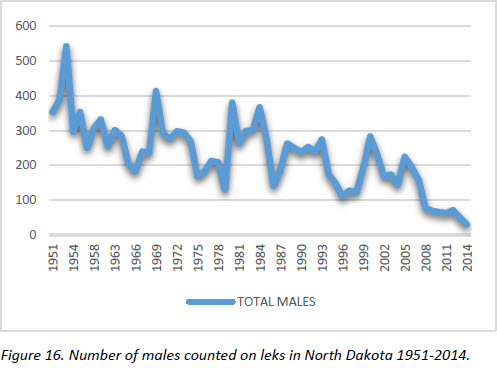 According to the Partners in Flight Landbird Conservation Plan, long-term population trend monitoring such as the Breeding Bird Survey produces imprecise trends for this species. No additional monitoring is needed at this time as the NDGFD will continue in the lead role of obtaining population date on Greater Sage-Grouse.

The Greater Sage-Grouse remains a Level I Species of Conservation Priority. The species is in imminent danger of being extirpated from North Dakota. 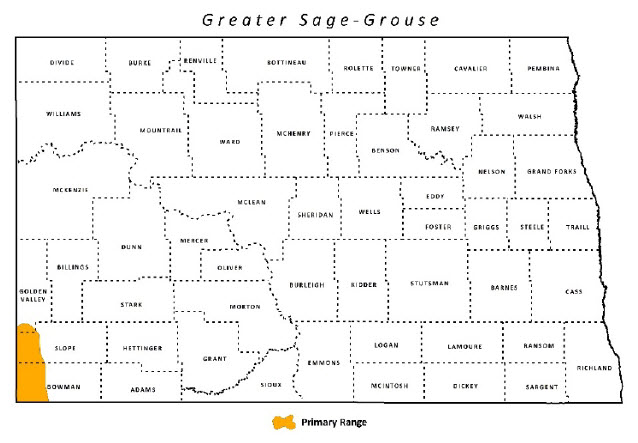