McCown’s Longspurs should be found in open shortgrass or heavily grazed mixed-grass prairie with little litter and low vegetation cover. Small-grain stubble fields and summer fallow fields are occasionally used. Often breed on high, barren hillsides with a southern exposure. Associated vegetation includes blue grama and buffalo grass. Nests are often placed near a clump of grass, shrubs, plains prickly pear, or a cowpie. Pairs often nest near each other and each territory requires 0.5-1.5 ha. Primary food includes seeds of grasses and forbs but also feed on insects and other arthropods.

Key Areas and Conditions for McCown's Longspur in North Dakota

The known tract of prairie used by breeding McCown’s Longspurs is a section of state school land in Bowman County. It is also referred to as the Rhame Prairie.

Conversion of grassland to cropland, energy development and urban expansion. Degradation of grasslands from invasive plants, woody encroachment, succession, and loss of diversity. Specifically, the loss of expansive tracts of native shortgrass prairie habitat has resulted in the near extirpation of the species in North Dakota.

Rate or effect of brown-headed cowbird parasitism is not known. The application of some pesticides has been directly linked to the death of nestlings. The effect of human disturbance on nesting birds is unclear.

The McCown’s Longspur remains a Level III Species of Conservation Priority. The species is in imminent danger of being extirpated from North Dakota. 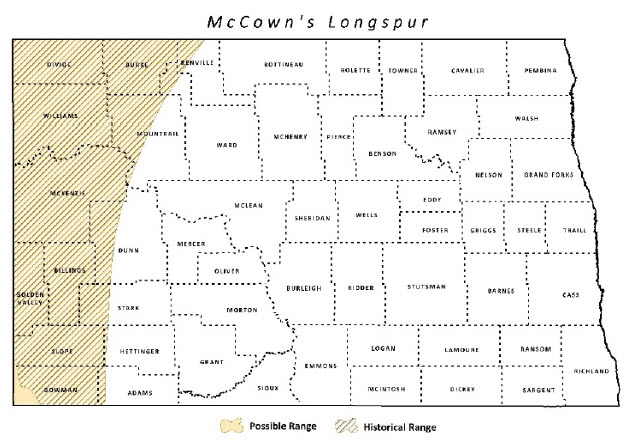