Native and planted grassland are primary habitat. Also occur in roadsides, weedy field borders, and hayland. Avoid very sparse grassland or tall cover. Fence posts are favored perches for singing. Will tolerate some shrubs but less tolerant of higher amount of trees in grassland. Territory size ranges from 3-13 ha. Forages on the ground for grain and weed seeds and insects.

Key Areas and Conditions for Western Meadowlark in North Dakota

No specific areas have been identified.

Conversion of grassland to cropland, energy development and urban expansion. Degradation of grasslands from invasive plants, woody encroachment, succession, and loss of diversity. Loss of tall perches, such as fencing, around grassland habitat may limit use.

Brown-headed cowbird parasitism is variable but may be of concern. Confirmed deaths from consuming poisoned grain. Pesticide acute toxicity may be a potential contributor to declines of grassland birds. Grassland birds avoid habitat within 150 meters of roads and 350 meters of oilfield infrastructure, likely due to anthropogenic disturbance of heavy traffic and/or changes in habitat near oil development. 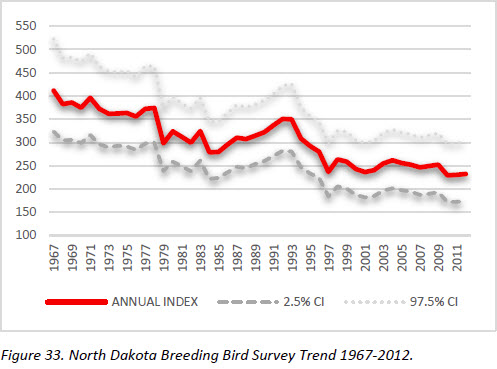 According to the Partners in Flight Landbird Conservation Plan, long-term population trend monitoring such as the Breeding Bird Survey is generally considered adequate. Ensuring all BBS routes are conducted annually is priority.

The Western Meadowlark has been added as a Level II Species of Conservation Priority. 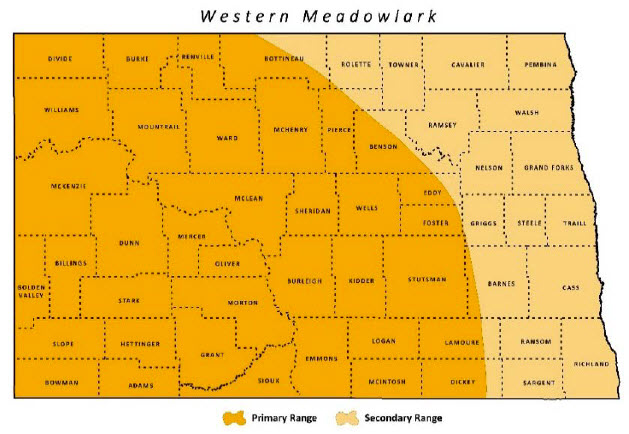