During migration, use primarily wetlands and cropland ponds for roosting, feeding, or both. Seasonal, temporary and semipermanent wetlands are the most commonly used. Large, shallow wetlands are used for roosting and smaller wetlands for foraging. Feed mostly on frogs, fish, plant tubers, insects, crayfish, and waste grains during migration.

Key Areas and Conditions for Whooping Crane in North Dakota

A complete listing of named rivers, lakes, and reservoirs where Whooping Cranes have been sighted is in Austin and Richert, 2001. However, key stopover sites may be located anywhere throughout the migration corridor. HAPET has produced spatial models to depict areas important to Whooping Cranes.

Conversion of prairie breeding habitat for agriculture during settlement times, along with unregulated shooting in the late 19th and early 20th century resulted in the survival of only one relic breeding population in the Woods Buffalo National Park in Canada. Wetlands used as stopover habitat by Whooping Cranes remain at risk of destruction.

Delayed sexual maturity, small clutch size, and low recruitment rate has precluded a rapid recovery. Whooping Cranes may be easily disturbed, particularly on the breeding grounds. The wintering population along the Gulf Coast in Texas is at risk from contaminant spills, although the probability of a spill is low. Several accidental shootings have occurred in the last few years. Power line collisions are the most common cause of Whooping Crane mortalities in the last 50 years. Collisions with wind turbines is of increasing concern. Loss of genetic diversity. Intensifying oil and gas development in North Dakota overlaps with the migratory corridor of Whooping Cranes and there is increasing risk of oilfield contamination of stopover habitat.

Continue to report Whooping Crane sightings in the spring and fall in North Dakota to appropriate key contacts. The Aransas National Wildlife Refuge conducts an annual Whooping Crane census on the wintering grounds in Texas. The Central Flyway Technical Committees work with the U.S. Fish and Wildlife Service to update and develop survey protocol.

The Whooping Crane is a migrant in North Dakota and therefore remains a Level III Species of Conservation Priority. 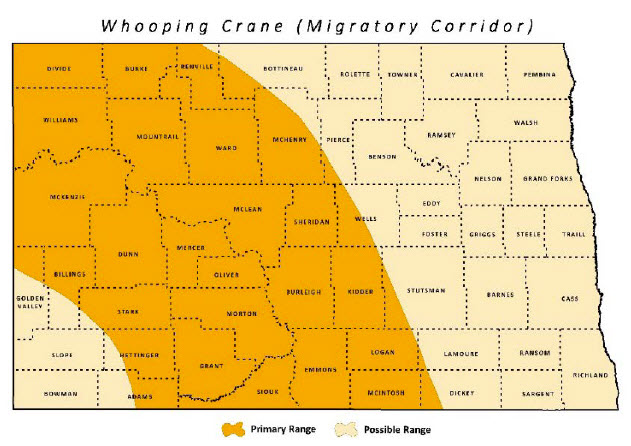