False Map Turtles prefer large rivers or streams. A highly aquatic species which rarely emerges from the water except to lay a clutch of 6-13 eggs in the spring. May bask on slippery snags rising at steep angles from the water, but flees quickly if disturbed. Feeds on aquatic vegetation, insects, worms, crustaceans, minnows, and mollusks.

The free-flowing Missouri River System below Garrison Dam is the only stretch of river where the turtles have been verified.

Habitat alteration from the impoundment of the Missouri River has affected the distribution of this species. Availability and quality or the alteration/destruction of sandbars in the lower Missouri River stretch could affect nesting.

The False Map Turtle maintains its Level III Species of Conservation Priority ranking. Turtle surveys of the Missouri river from 2007 to 2009 provided more confirmed sightings, but little is still known of this species life history details in the state. 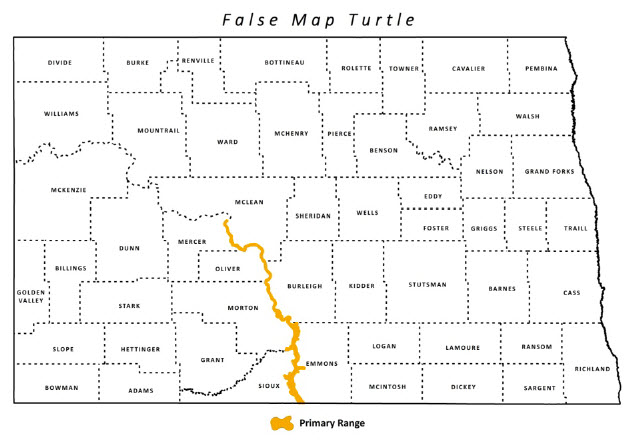