Prefer dry, sandy or gravelly areas in grassland, open sand prairies, or sand dunes. Sometimes mixed forest habitats and cropland may be used. Burrow into the loose soil or may use mammal burrows for cover, but will not use artificial cover as much as other snakes. Most active in mornings and evenings, will estivate in very hot weather. Feed on a variety of prey such as toads, lizards, snakes, reptile eggs, small birds, and rodents, which they swallow whole and alive.

Sandy areas preferred by hog-nosed snakes are fragile habitats and may be easily degraded or destroyed.

Hog-nosed snakes may be intentionally killed if mistaken for a rattlesnake. It is unknown how pesticides, development, and other disturbance affect hog-nosed snakes.

Future recommended survey methods would include trapping for this species.

Currently no monitoring is taking place. Possible monitoring options could include school classes/programs including universities, the general public through the NDGFD incidental reporting system, or national monitoring initiatives such as PARC. Monitoring should be directed at several species.

The Plains Hog-nosed Snake maintains a level I Species of Conservation Priority. More information is needed to understand the status of this species in North Dakota. Work toward a monitoring plan is needed. 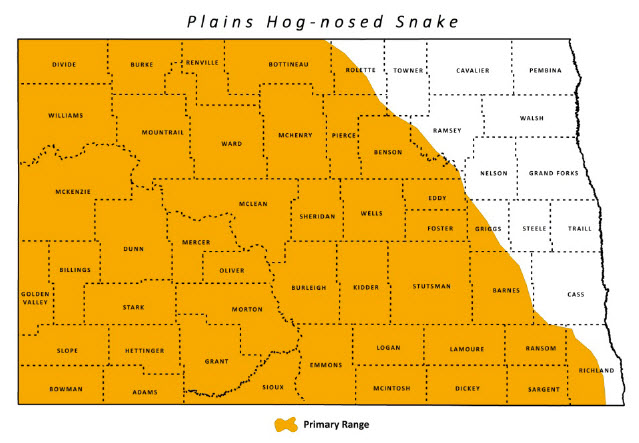