Rather dry, open grasslands with sandy or otherwise loose soil are preferred. Typically avoid river bottoms and woodlands. Burrow into the ground until damp soil is reached, sometimes more than 2 feet. Prolific breeders which rarely emerge from the ground except when heavy rains occur, creating small pools of water used for breeding. Temporary wetlands without heavy vegetation such as those found in agricultural fields are easily flooded and may provide tolerable spadefoot breeding habitat. Spadefoot’s may also emerge from the ground during very humid nights. Tadpoles may be omnivorous or sometimes even cannibalistic. Adults eat small invertebrates.

Key Areas and Conditions for Plains Spadefoot in North Dakota

Spadefoots were seen for many years on the eastern edge of Carrington. Focus areas where this species may occur include the Glacial Lake Deltas.

Ephemeral wetlands in which the species naturally breed are at risk of destruction and/or degradation. However, they may be tolerant of a broad range of habitats, even laying eggs in non-native sites such as ditches or flooded agricultural fields. Prairie habitat fragmentation may hinder movements.

Use of pesticides and herbicides may impact populations locally. Disease such as ranavirus and chytrid fungus may be very detrimental to amphibian populations.

Future surveys could include visual encounter surveys or using auto recorders, which turn on to record audio when the humidity or other environmental cues occur at a certain level.

There currently is no monitoring protocol in place. Monitoring tools could include school classes/programs, the general public, or national monitoring initiatives such as ARMI, NAAMP, or PARC. Amphibian monitoring can and should be directed at several species

The Canadian Toad maintains its Level I Species of Conservation Priority ranking. Sampling of amphibians has been conducted as part of number of SWG projects. A larger scale survey is currently underway (T-44-R Amphibian and reptile surveys of southeastern North Dakota). Work towards a monitoring protocol is needed. 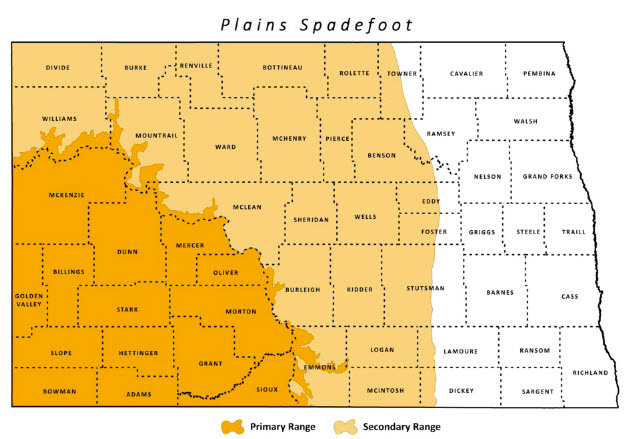