Ferruginous Hawks inhabit a variety of open grasslands and shrub communities. Cultivated fields, high elevations, and forest interiors are avoided. Both native and tame grasslands are utilized, as well as hayland, and pastures. Most nests are located in solitary trees, but may nest on or near the ground, in large shrubs, on utility structures, or hay bales. Will nest on hills less than 10 meters above the surrounding area and facing south or west. Primary prey includes black-tailed prairie dogs, Richardson’s ground squirrels, and rabbits. Birds are a small percentage of their diet and are fed mostly to fledglings.

Key Areas and Conditions for Ferruginous Hawk in North Dakota

Conversion of grassland to cropland, energy development and urban expansion. Degradation of grasslands from invasive plants, woody encroachment, succession, and loss of diversity. Agricultural growth has limited Ferruginous Hawk distribution to areas of uncultivated land. The loss of prairie dog towns in southwestern North Dakota and Richardson’s ground squirrel colonies east of the Missouri River due to poisoning, conversion to cropland, and other factors may also negatively affect hawk populations.

This species is extremely sensitive to human disturbance, will avoid nesting within 0.7 km of occupied buildings, and may occasionally be illegally killed. Disturbance of nest sites near energy development actives may reduce productivity or cause nest abandonment. Some mortality from collisions with power lines or wind turbines, or electrocution. Pesticides do not appear to be a serious threat, although illegal use of poison such as strychnine for control of ground squirrels or prairie dogs could pose a threat.

Explore the role of jackrabbits or other primary prey species on population fluctuations of Ferruginous Hawks.

According to the Partners in Flight Landbird Conservation Plan, long-term population trend monitoring such as the Breeding Bird Survey is generally considered adequate, but some issues may not have been accounted for (e.g. bias). Ensuring all BBS routes are conducted annually is priority. Monitoring plans should follow recommendations of the North American Bird Conservation Initiative ‘Opportunities for Improving Avian Monitoring’. 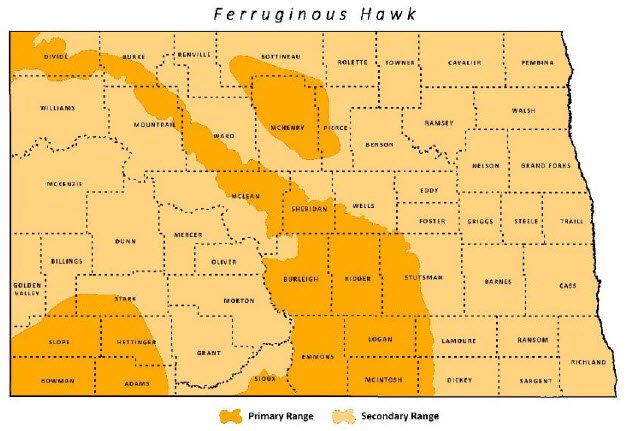