Open shrubland and grasslands of shortgrass, mixed-grass, and xeric grasslands are preferred by Golden Eagles. Avoids heavily forested areas but will use riparian or woodland/brushland habitat. Typically nest on cliffs but also in trees such as cottonwood and green ash, or even on or near the ground. Nests on cliffs generally face southerly. Nests will be reused by returning eagles or a new pair. Some are associated with black-tailed prairie dog towns. Primary prey includes ground squirrels and jackrabbits; however, eagles are opportunistic and other prey include turkey, coyote, antelope, porcupine, skunk, bighorn sheep lambs, great-horned owls, and waterfowl.

Key Areas and Conditions for Golden Eagle in North Dakota

Eagles may be limited by the abundance of their primary prey, rabbits and ground squirrels. The effect of roads fragmenting the landscape, and oil and gas exploration, is unknown.

Collisions with vehicles, power lines, or other structures, and electrocution are the leading human-induced causes of death. Collisions with wind turbines is of increasing concern. Pesticides or contaminants are a threat when eagles consume poisoned prey. Golden Eagles are occasionally exposed to lead, possibly from consuming non-waterfowl prey. Human activity such as recreational viewing, research activities, noise, agricultural or energy development activities, or the mere presence of humans may agitate nesting eagles if the disturbance is close (less than330 ft.) and/or persistent. This may result in eagles being inadvertently flushed from the nest for extended periods of time and could result in the death of the young or nest abandonment.

Continue to maintain a list and spatial database of known Golden Eagle nest sites. Considerations in Golden Eagle monitoring should refer to “Interim Golden Eagle Technical Guidance: Inventory and Monitoring Protocols; and Other Recommendations in Support of Golden Eagle Management and Permit Issuance.”

The Golden Eagle remains a Level II Species of Conservation Priority. A nest site spatial database has been developed and is being used to minimize impacts to nesting eagles. 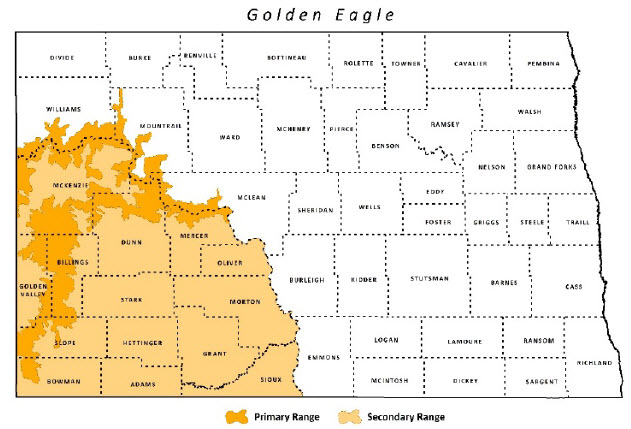