American Kestrels inhabit a variety of open to semi-open grasslands, agricultural land, badlands, and brushy margins of open woodland. Kestrels are cavity nesters and will nest in natural holes, tree crevices, or man-made nest boxes. They frequently perch on utility lines and poles. Primary prey includes large insects such as grasshoppers, beetles, dragonflies and butterflies, and in the winter will prey on mice and small birds.

Key Areas and Conditions for American Kestrels in North Dakota

Conversion of grassland to cropland, energy development and urban expansion. Removal of trees with nest cavities. Kestrels are secondary cavity nesters and the loss of woodpecker-excavated cavities or other natural cavities limits the availability of nesting sites.

West Nile virus, increasing competition/depredation from Cooper’s hawks, environmental contaminates, and pesticides have been suggested as possible reasons for the kestrel’s population declines. Nest abandonment is greater in higher human disturbance areas. However, the exact cause of widespread decline has not been identified.

Determine the effects of contaminants or insecticides on prey species. 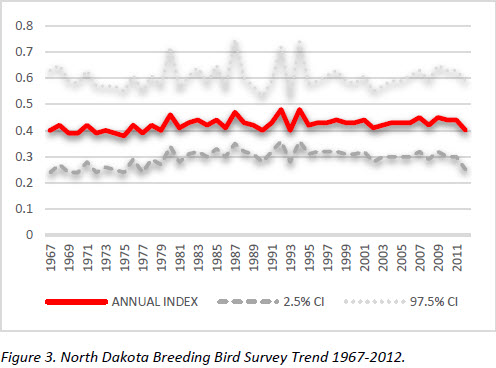 According to the Partners in Flight Landbird Conservation Plan, long-term population trend monitoring such as the Breeding Bird Survey is generally considered adequate. Ensuring all BBS routes are conducted annually is priority. Monitoring plans should follow recommendations of the North American Bird Conservation Initiative ‘Opportunities for Improving Avian Monitoring’.

The American Kestrel has been added as a Level II Species of Conservation Priority. 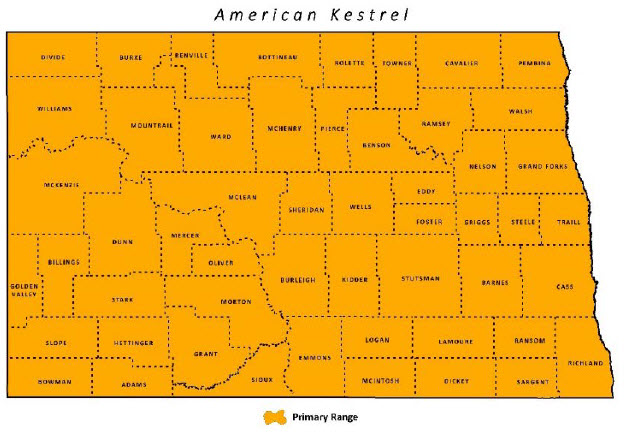