Peregrine Falcons may be observed using open expanses of native prairie, badland complexes, rocky cliffs overlooking rivers, lakes, or other water in North Dakota. They do not build their own nest, but instead nests in a scraped out hollow on ledges, in crevices of steep sides of buttes, on tall buildings, or other high structures. Prey upon pigeons, grebes, ducks, and a variety of other small to medium sized birds.

Key Areas and Conditions for Peregrin Falcon in North Dakota

No specific sites have been identified. The most recently confirmed naturally occurring nest was in 1954 on Bullion Butte in Billings County.

Loss of nesting sites such as cliffs, ledges, or trees, are often irreplaceable and may be the primary habitat factor limiting peregrines. Peregrines may become comfortable with human activities, hence their tolerance for nesting within city limits.

Illegal shooting and the effects of DDT on reproductive success were also to blame for decline of the species; however, since the ban of DDT and stricter enforcement, peregrines have been increasing. The falcons may become infected with trichomoniasis from eating infected doves and pigeons.

According to the Partners in Flight Landbird Conservation Plan, long-term population trend monitoring such as the Breeding Bird Survey produces imprecise trends for this species and is inadequate in the northern range. Most Peregrine Falcons are observed during spring and fall migration. A monitoring plan specific to Peregrine Falcons is not needed, the NDGF will monitor if any potential breeding observations are reported. 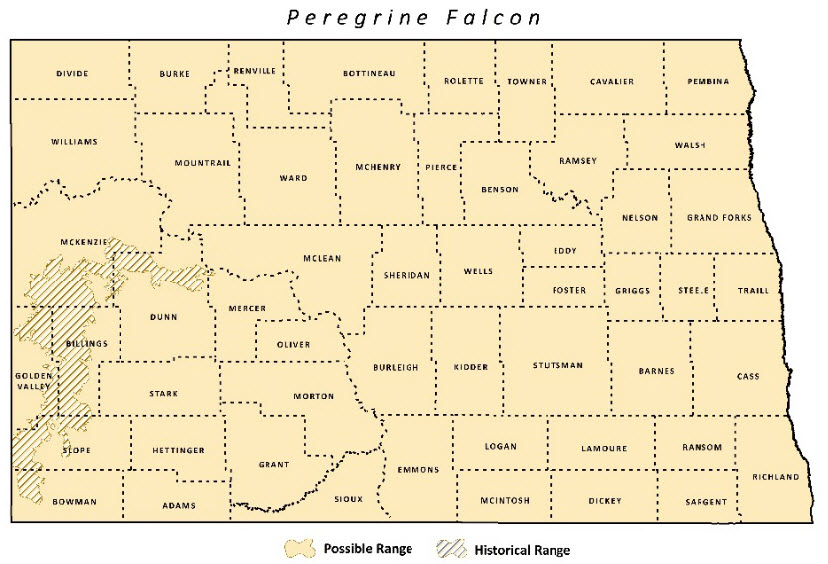