Shortgrass prairie, shrubsteppe, and agricultural habitats in generally arid landscapes. Nest primarily on cliffs, buttes, canyon walls, rock outcrops, and ridges. Aeries include depressions into the side of a cliff, horizontal ledges, or may use artificial cliff cavities created by humans. Aerie usually located in the top two-thirds of the cliff. Prairie Falcons may, although rarely, also nest in trees, transmission line towers, or in abandoned nests of other birds. Nest sites tend to face south. Home ranges average around 70 km². Primary prey items include ground squirrels, passerines (particularly horned larks), lizards, and other small rodents.

Key Areas and Conditions for Prairie Falcon in North Dakota

No specific sites have been identified. However, many current and former aeries are known.

Destruction or degradation of native prairie resulting in the loss of foraging habitat or prey species may impact populations. Grazing does not appear to affect falcons.

Illegal shooting may be a cause of mortality. Prairie Falcons were sensitive to pesticides such as DDT which resulted in lost productivity. Oil and gas development does not appear to significantly impact breeding falcons, but too much blasting close to the nest may have minor ramifications. Human disturbance may be a potential factor resulting in nest failure. Nests closer to roads and easily accessed or disturbed by human activities have resulted in less success. Mortality from collisions with fences occurs.

According to the Partners in Flight Landbird Conservation Plan, long-term population trend monitoring such as the Breeding Bird Survey produces imprecise trends for this species. Continue to maintain a list of known Prairie Falcon nest sites. Monitoring plans should follow recommendations of the North American Bird Conservation Initiative ‘Opportunities for Improving Avian Monitoring’.

The Prairie Falcon remains a Level I Species of Conservation Priority. A nest site spatial database has been developed and is being used to minimize impacts to nesting falcons. 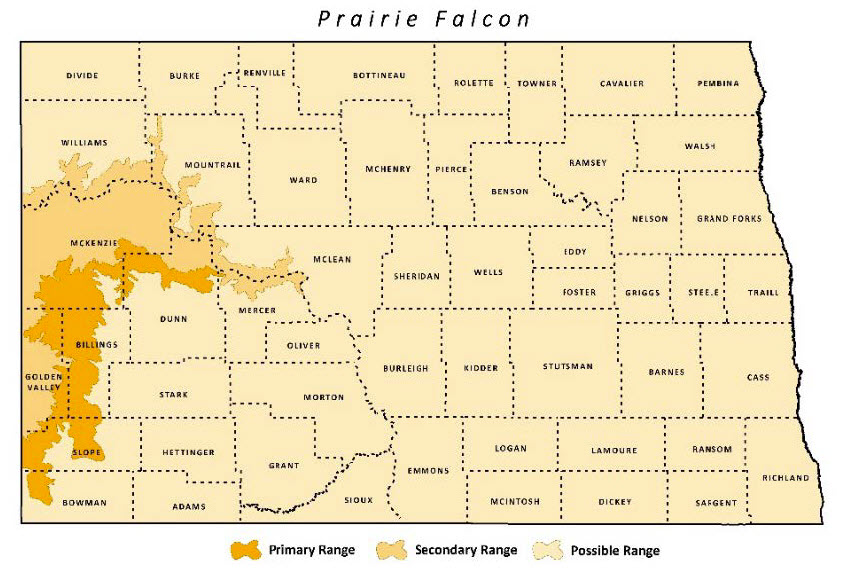